Canadian shoppers are rapidly and vigorously ditching sedans for crossovers, despite today’s traditional family sedan strutting the best stuff automakers have ever thrown into the segment.

The latest-generation 2019 Toyota Camry embodies this.

The styling is stronger than ever. This might be the first Camry anyone ever bought because of how it looks. The latest iteration sees this machine dressed to be more daring and less generic, and it instantly and powerfully communicates its identity from a mere glance.

The interior follows suit, and might be the Camry’s most valuable design asset. This tester’s brightly colored cabin featured creamy beige leather with quilting and stitching in spades, and a dash, door panels, and console rich in sculpting, detail, curvaceousness, and accenting. Layers and tiers of swooping gloss, wood, stitching, and screens flow like liquid, playfully intersecting to create a distinctive atmosphere and a level of refinement once reserved for big-buck luxury flagships.

Taken as a whole, it’s tidily busy. Upscale without being glitzy. Attractive and thoughtful and carefully executed to come across more substantially than the price suggests. Camry’s cabin, in full, pulls its weight towards the vehicle’s price tag.

Entry and exit are simple thanks to wide door openings, a gentle plop down onto pillowy leather, and relatively thin door sills that are easily stepped over.

Once seated, your average-sized writer found plenty of stretching-out space in both front and rear seats, and I noted adult-friendly rear-seat legroom and usable headroom at each perch. There’s plenty of organized storage nearby for those smaller items you’d like to keep handy as you drive – a wallet, phone, camera, chewing gum, and a canister of bear spray because I live in Sudbury and you just never know.

There’s a door-handle storage nook. A personal storage drawer ahead of the driver’s left knee. Proper cupholders. A non-slip wireless charging pad ahead of the gear shifter. Abundant charging ports and USB connectors throughout to keep mobile electronics juiced at all times.

My XLE tester went high-end with a loud and clear JBL stereo, panoramic sunroof, a large and logical central command touchscreen interface, and more. As a whole, here’s a cabin that’s nicely assembled and laid out, nicely designed, and brimming with space to spare for your people and things and gadgets.

The trunk is wide and deep and accessed via an opening nearly as wide as the entire vehicle. There’s room for a four-person road trip or a giant load of shopping with little second thought – though the pass-through enabled by the folding rear seats is somewhat constricted, and the seats don’t quite fold fully flat, which can make it tricky to load in longer, heavier items without gouging the fabric on the rear of the seatbacks.

Further, note that despite the capacious trunk, the trunk-lid arms may smash into your cargo if it’s not carefully arranged. Mostly, the cargo space has room to spare and is easily loaded and unloaded, though it may prove fussy in a few specific situations.

Power comes from Camry’s latest 2.5-litre four-cylinder, which runs the Atkinson cycle, a massive 13:1 compression ratio, and D4S direct injection for 203 extra-thrifty horses. An eight-speed automatic connects those to the front wheels. Simply, this powertrain uses some of Toyota’s latest tricks to squeeze the most energy out of every molecule of fuel it burns.

Driven as most Camry drivers drive, most of the time (gently, and in no particular rush), the engine satisfies. Here, it’s mostly invisible, decently responsive, very easy on fuel, and managed by a transmission that shifts quickly and smoothly enough that you virtually never feel it doing its job.

The segment’s latest turbocharged engines of similar output are typically smoother and quieter though – thanks to the availability of much more torque (that is, responsiveness) from much lower revs where the engine is operating more quietly. Camry’s big, non-turbo four isn’t loud or intrusive until worked hard, but it’s not ghostly quiet if kept to low revs, nor as responsive, as similarly powered engines in competitors like the Accord or Malibu. Those among us who fancy an absolutely whisper-quiet engine and heaps of low-end torque have better options.

Pushed, Camry’s engine is refined and snappy, only sounding out of its comfort zone at or near max revs. All the while, the eight-speed automatic shifts with consistent smoothness and care, and a brief but notable pause between each gear to keep things buttery smooth. Passing and merging power is adequate or better, and with eight gears to choose from, there’s never much of a wait for forward thrust when called upon.

Also, I used less than 7 L/100 km during sustained highway cruising (on winter tires), at a good clip. This makes Camry one of the thriftiest big sedans I’ve recently driven. I used to have a budgie named Dr. Edmund Snigglesworth, and he was pricier to feed than this Camry was.

Several drive modes can be triggered via buttons behind the shifter. If you’re a light-footed and easygoing driver, “Eco” will be your preference since it makes it easier to drive the Camry in the most fuel-efficient manner possible. This mode is such a good fit for the car’s personality that there’s hardly any reason to turn it off. Use it, and it’s easily a good long day or more of highway cruising before you’ll need to stop for fuel. “Sport” mode, conversely, dials up the sensitivity of the throttle, and sees the engine using more revs, more of the time. 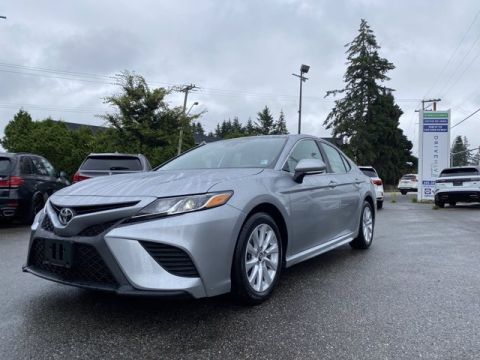 Toyota figures you like safety gadgets and want all of them, so radar cruise, lane-departure warning with steering assist, blind spot monitoring, collision warning system with pedestrian detection and automatic high-beams are all included. Those after little less than every safety feature on the market today are covered. Also, this stuff is all standard on all Camry models, which is nifty.

On the highway, you’ll find another one of this machine’s strongest assets: the ride. Simply, this might be the ride-quality leader in its segment. It’s very relaxed and compliant, soft at virtually all times, rarely crashes into bumps, and does an expert job of isolating drivers from unfriendly sensations hurled their way from beneath. And for how comfortable a ride this is, it’s not excessively squishy or floaty either: Camry is comfort-first, but without feeling like its shocks are made of chewed Skoal. Drivers after a sedan set up for comfort and fuel efficiency first will find it a lovely setup.

While cruising, the steering is light enough to be used with minimal effort, but not so quick that it feels nervous or jerky. It’s nicely dialled in to support the relaxing feel imparted elsewhere. Noise levels are kept in check, and that’s even with the tester’s typically noisier winter tires installed.

Under braking, there’s little remarkable about the feel at the pedal, though the Camry pulls down to a stop with urgency, and typically in a straight line, without fuss. Should the ABS engage, you won’t feel much of it at the pedal, but you will hear it through the firewall.

Headlights perform well, offering a thick and widespread soaking of bright white light up the road. This improves safety and also keeps your eyes from feeling like gravel if you’ve been driving in the dark for many hours.

Added up, you’ve got an upscale driving atmosphere with plenty of room for occupants to relax, unwind and socialize. Mostly, Camry is uniquely superb at strutting its best stuff quietly in the background, while turning n in hours of comfy cruising with minimal fuel use. And with automatic lights, high-beams, climate control, and more, it’s got all required equipment for set-it-and-forget-it driving.

My tester often performed like a tank in the snow. Installed Blizzak tires provided extra bite for all traction-enhancing systems to work with, and each does its job discreetly and without much fuss detectable from the driver’s seat. Traction and stability control interventions are largely invisible unless you’ve mucked something up badly, and though the ABS can be a little noisy when triggered, it operates with minimal buzzing or clicking at the pedal, which supports refinement. On several occasions, it pulled through foot-deep snow with grip to spare, too.

A few gripes are notable. First, sportier drivers may want to opt for a sportier trim grade and maybe the V6 engine, as my XLE tester was about 214 percent comfort first, and feels neither bothered, nor eager, during sportier driving in terms of performance and reflexes. Also, with an ask of nearly $37,000, I expected a few more features in my tester – like maybe remote start, a heated steering wheel, and chilled leather seating. These are common at or below this price point elsewhere, but not included here.

Advisable cross-shopping exercises should include test drives of the comparable Honda Accord and Chevrolet Malibu, both of which have smoother and quieter drivelines. The Buick LaCrosse, additionally, is another excellent and comfy highway hauler with an even more impressive cabin. If you’re shopping a conventional family sedan, you’ve got some great options to choose from, and the latest Camry sits firmly amongst the best of these.