Seven years after its 2012 North American debut as the Scion FR-S, Toyota’s now-rebadged 86 has changed very little. The 2017 model year saw the biggest changes, with the little 2+2 sports coupe getting revised front and rear fasciae to go with its new Toyota identity, an updated interior, a 5 hp power bump, and retuned stability control programming. For 2019 the 86 carries on essentially unchanged, with the only real news being the introduction of a TRD Special Edition model.

Like the equivalent of flying in Iron Man’s suit.

Priced a heady $4,960 above my $33,260 GT test car, the TRD Special Edition doesn’t offer any extra power (it has the exact same direct-injected four-cylinder boxer engine as all manual-transmission equipped 86s, making 205 hp and 156 lb-ft), but it has improved handling and braking thanks to stiffer Sachs dampers, bigger Brembo brakes, and 18-inch alloys (instead of the standard 17s) fitted with Michelin Pilot Sport 4 tires. It also gets some appearance items including red accents in the cabin, a front splitter, a unique three-piece trunk lip spoiler, a different rear bumper with brushed stainless-steel exhaust tips, and raven black paint. With only 50 TRD Special Edition models slated for the Canadian market it’s rare enough that Toyota has so far withheld it from our local press fleets.

I last drove the 86 in 2014 when it was still a Scion, and the interior changes since then are a big improvement. Where the Scion cockpit had padded-vinyl door uppers and an unconvincing faux carbon-fibre dash insert, in the 86 GT both are now covered in an Alcantara suede-type material, creating an appearance that’s at once richer and more cohesive. The centre stack, which was previously faced with cheap-looking embossed plastic, now uses what looks for all the world like genuine (and beautifully finished) carbon fibre. The deeply bolstered seats are superbly comfortable and supportive, and in the GT they have leather bolsters with suede inserts that match the dash insert and door uppers (base models have cloth inserts). All in all, it speaks the visual language of a proper sports car, and feels more expensive than the 86 actually is.

The driving experience has changed barely a whit, and that’s a good thing. If you’ve never experienced the joy of driving a small, nimble, manual-shift rear-wheel-drive car like the 86, it can be difficult – perhaps impossible – to convey just what it is you’re missing. There’s an immediacy to the experience, a connection between the car and driver such that the machine becomes almost an extension of yourself, and driving becomes not some task you need to handle, but an immersive experience to be savoured. Where a typical automatic-equipped, front- or all-wheel-drive crossover has all the driver connection of riding in a regional jet, driving a sports car like the 86 is the equivalent of flying a hang-glider. Actually, scratch that – it’s more like the equivalent of flying in Iron Man’s suit.

The 86 has an exceptionally low centre of gravity, and its steering is quick and precise, making it an absolute delight in the corners. With relatively skinny stock tires, the car’s ultimate limits of adhesion aren’t exceptionally high, but the driving experience within those limits is sublime. When you do reach the limits of adhesion, the 86’s excellent balance and Torsen limited-slip differential make it easy, should you desire (and provided you have the stability control turned off), to hang the tail out in a power slide. It’s the reason the 86 is popular with drifters. Leave the stability control on and the recently retuned electronics will allow you enough leeway to make the car feel lively, but will quickly reel things in before they go sideways. The ride is firm but not harsh, allowing the 86 to serve well in commuter duties. 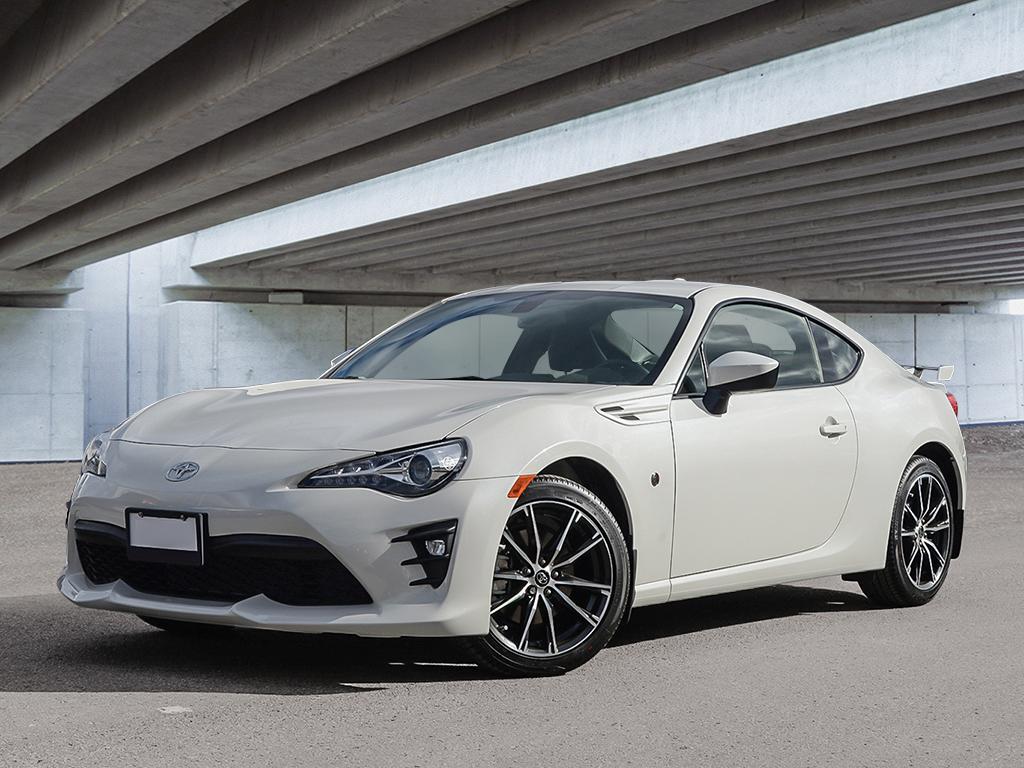 A question of power

Under the hood, as noted, the 86 has the same 2.0-litre horizontally opposed direct-injected four-cylinder engine it launched with (although the engine now has a little more bling, with a red powder-coated intake manifold). In manual-transmission models the engine produces 205 horsepower, 156 lb-ft of torque, and a wonderful characteristic throaty growl. Official fuel consumption ratings for the manual-equipped 86 come in at 11.3 / 8.3 L/100 km (city/highway) and my test car’s real-world results were close to this at 8.3 L/100 km during an extended highway run and a shade over 12 L/100k m during a week of enthusiastic city driving.

A six-speed automatic with paddle shifters is available, although in that case output is limited to 200 horsepower and 151 lb-ft of torque. Quite aside from the power and price differences (depending on trim levels the automatic costs $1,200 to $2,000 more), the manual transmission is far better suited to the character of the car, with a precise feel and quick, easy throws (at least once warmed up – I found it could be a bit notchy when cold). You may perhaps think that learning to drive standard is difficult, but in this particular case the rewards will far outweigh the effort required.

On the subject of power it’s worth noting that 205 hp is enough to be fun, but far from overwhelming, and opinion is divided as to whether this is good or bad. Toyota and Subaru (which builds the twinsy BRZ) have doggedly ignored pleas over the years to boost power with a turbocharger, claiming it would upset the car’s chassis balance, and I’m in agreement with this. Thanks to its unfussy naturally aspirated engine configuration, the 86 has delightfully immediate throttle response, making it feel plenty peppy around town and on twisting roads. And with a curb weight of only 1,254 kg, 205 hp will whisk the car from zero to 100 km/h in just a shade over seven seconds. Unless you’re on a track, pretty much the only thing that happens after that is speeding tickets.

All that said, the latest official word is that Toyota and Subaru are indeed working on a second generation of the 86/BRZ twins. Shaving weight is high on the list of goals, and this would also be a good time to rework the chassis to accommodate more power. A potential candidate might be the newly developed 2.4L FA24 engine from the Subaru Ascent SUV, with or without its turbocharger (with the turbo it makes 260 hp and 277 lb-ft of torque). Even more intriguing is the possibility that Toyota and Subaru might be considering a more spacious and practical variant to keep their 2+2 coupes company – both companies have shown hatchback “shooting brake” concept cars based on the current coupe, and when I suggested during a brief chat with Toyota Canada VP Stephen Beatty that BMW has entirely relinquished the affordable rear-drive sport sedan crown (hell, the latest generation 3 Series won’t even be available with a manual transmission) and Toyota should pick it up with a four-door 86, he didn’t dismiss the idea but instead smiled and remarked that my thinking mirrors that of Toyota’s engineers.

But enough fantasy. In reality, the 86 has a decent-size trunk for a small sports coupe (195 L), and a barely-there back seat that folds down for increased luggage capacity. Toyota claims 759 mm of rear legroom for rear passengers, but that’s with the front seat set some distance forward. I was able to bring a couple of passengers along for the ride, and at 5'11" I can indeed “sit behind myself” after scooting the driver’s seat forward from my normal driving position, but I wouldn’t want to travel like that for any distance.

Infotainment is handled by a double-DIN style eight-speaker AM/FM display unit that offers the essentials – Bluetooth connectivity, voice control, a USB port, and auxiliary jack – and nothing else. The lack of Android Auto or Apple CarPlay is unfortunate, as that could make the system as full-featured as your phone allows, but the audio does at least sound reasonably good. Standard comforts include automatic air conditioning, tilt and telescoping steering, cruise control, mirror-mounted rear-view camera and automatic headlights. GT trim adds extras including the suede-and-leather upholstery, dual-zone air conditioning, heated seats, smart key with push-button start, fog lights, theft alarm, and a 4.2-inch multi-information system in the instrument cluster that can display a variety of driving information. Some of this is useful (temperature and charge gauges, trip meter with average/instantaneous fuel consumption) and some I’d count more as entertaining or distracting (lap timer, g-force meter, and power/torque curve gauge).

Overall, with a base price starting at $29,990, the Toyota 86 strikes a nice compromise between Ford’s 2.3L Ecoboost Mustang (starting at $28,599) and Mazda’s MX-5 (starting at $32,900). Weighing in at a hefty 1,855 kg and 310 hp, the Mustang is a bit roomier and quicker than the 86 (it’ll sprint to 100 km/h in about 6.6 seconds), but dynamically speaking all that weight makes it feel more like a grand tourer than a sports car. At a willowy 1,065 kg and 181 hp, the MX-5 is every bit the 86’s dynamic rival, and a shade quicker than even the Mustang (0–100 km/h takes about six seconds flat in the Mazda), but with a tiny trunk and only two seats, you’re not as free to fill the MX-5 with luggage and head out on week-long road trip as you are with the 86 or the Mustang (and you won’t ever be able to ferry any extra friends around town, cramped or not). Other competitors include the Subaru BRZ (the 86’s twin), the Fiat 124 (the MX-5’s sibling), the base Camaro and the Nissan 370Z, although the last two are both significantly heavier than the 86.

If what you want is the purest, most affordable sports car experience, the dynamic stand-outs are the Mazda MX-5 and the Toyota 86 – both are brilliant cars, with the Toyota holding the edge in terms of price and practicality.

About Simon Hill
Simon Hill rebuilt his first engine, an air-cooled Volkswagen, at 14. He started writing professionally about cars in 2009 and was also the editor of Boat Journal magazine. He lives in Vancouver, BC.
You may also like
8.0