Some decisions are made more with the heart than anything else. Plunking down nearly a hundred grand on a roaring, 700-plus horsepower Dodge Challenger SRT Hellcat that’s one of the fastest-accelerating production cars on the planet is one of those things.

'As menacing as all this visual intimidation is meant to be – and is – this vehicle is really, truly, and almost totally, all about the engine.’

This particular Challenger Hellcat is the new-for-2018 Widebody model, which uses the same engorged rear fenders as the even crazier 808 hp Challenger Demon. The Demon’s widely quoted 840 hp figure is when using 100+ octane racing fuel; the 808 figure is with regular ol’ 91 octane premium.

Those fender flares now on the Hellcat Widebody add 8.8 centimetres (3.5-inches) of menacing width in total to the car, and allows Dodge to stuff in even larger rear rubber: monster 305/35ZR20 Pirellis steamroll dragstrips, corners and cruising boulevards in equal measure. Plus Dodge adds the front lower clip from the Demon as well, in another visual ode to the most powerful muscle car ever.

But really, as menacing as all this visual intimidation is meant to be – and is – this vehicle is really, truly, and almost totally, all about the engine.

Not only does the massive displacement engine suck in 6.2-litres worth of big block air and premium fuel, but the eight cylinders under the Hellcat’s hood are also supercharged at the crank to help bring its 707 galloping horses under a barely controlled fury under the driver’s right foot. Special hollowed out inner headlights help suction up extra power-producing oxygen. A unique dual cooling heat exchanger in the supercharger housing that uses extra pumped in and specially cooled air helps keep horsepower numbers from evaporating at hot summer temperatures, where even a sunny versus a rainy day can cause at-the-crank power numbers to drop by 50 hp, concede SRT officials.

even after hard track driving at heat-wave-like 38 degrees Celsius, says Dodge, the Hellcat’s system was designed to provide all 707 hp for at least 20 minutes of full power in these extreme conditions, and more of that total longer after that.

That lofty horsepower figure is easily the highest number for any sports car that comes in under six figures, though its as tested sticker of $96,610 certainly comes close. That horsepower figure has been bumped up to 717 for the 2019 model, but if there was anything on our wishlist for this ’18 Hellcat, it certainly wasn’t another 10 hp.

Actually, now that the Dodge Challenger SRT Demon has finished its promised limited production run, its higher volume 797 hp Hellcat Redeye replacement may now start just under six figures in Canada as well, but certainly above the ’18 Challenger Hellcat’s $78,195 MSRP. Both of these models represent the most powerful vehicles currently built in Canada, at FCA’s Brampton assembly plant, with the Demon version the most powerful vehicle to ever be produced in Canada or by Dodge. And any other FCA vehicle outside some hyper-exotic Ferrari models.

On the road, it’s really the Hellcat’s hellacious torque that impresses most. After a snarly bark upon startup, the car’s dash reminds you that you have used the full-power ‘red key,’ and not the normal black valet key, which detunes the engine to a mere 500 hp. With the six-speed manual of our tester, every snikt into first gear came with a jump upon clutch release with just a toe poke of throttle until you become used to it, that torque chomping at the bit to get out and run right from off-idle.

Dodge says all this power and the beefier rear tires of the Widebody bring this Hellcat’s 0-100 km time down to 3.4 seconds, down slightly from 3.5 seconds for the regular ’18 Hellcat. Interestingly, both Hellcat Redeye and regular Hellcat for 2019 are both at 3.4 seconds, with SRT officials saying at those horsepower levels, faster times require grippier, more strip-oriented tires.

That ‘base’ Hellcat horsepower figure has been bumped up to 717 for the 2019 model, because there’s no such thing as too much power in this muscle market, even if the last thing it needed was another 10 hp.

Handling is clearly lower on the priority scale than its volcanic power, as per brash muscle car tradition, but as far as I was willing to push the Hellcat on its summer performance tires soon before the first snow flew here in southern Ontario, the tires actually hold on well in all but chilly and frosty morning roads. Its tail-happiness in these conditions reinforce that the Hellcat is a monster performer just waiting to be let loose and flex that heavy-breathing engine as its traction control system cuts in early.

Once the tires and temperatures warm up a bit, aggressively tackled off-ramps show a surprising amount of resistance to body roll, which has long been the bugaboo of the Challenger. The Hellcat may still be a step behind in overall handling compared to top versions of the Mustang GT350R and Camaro ZL1, with less advanced suspension componentry than those two if you’d like to tackle race tracks that curve, but the straight-line performance of this big Dodge can challenge any vehicle, at any price.

Interior all about performance too

That laser-like focus on performance especially is evident inside the cabin, and not just from the red seatbelts (a $125 option) that immediately communicate the Hellcat’s intent upon opening the driver’s door. Aggressive side bolsters may make getting out in particular slightly more difficult, but they manage to hold the driver in place very well on those highway ramps.

Both a manual and automatic transmission are offered, with our tester’s manual adding $1,000 to the bill – yes, we’ve reached a point where automatic transmissions are increasingly the default transmission, with the clutch pedal and shifter a novelty item for enthusiasts. But the manual transmission still comes equipped with a launch control system, another rarity these days, and various driver menus inside the Hellcat allow the driver to adjust at what rpm the shift light will come on, if at all, in each of the six gears.

Other performance parameters such as engine response, steering feel, and suspension setup can also be adjusted to taste, starting from default ‘Street’ settings, on up through Custom, Sport and Track modes. And importantly, its “tail happiness” allowance can also be adjusted, with the level of sensitivity for its electronic stability control easily seen between the speedo and tach, with increasingly large yellow ‘skid marks’ to show how much leniency your electronic overseer will allow.

And yes, for those brave (on the track) or fool-hardy (on the street) souls, both traction control and the stability control system can be fully defeated, for max hooligan powerslides, or action scene filming. 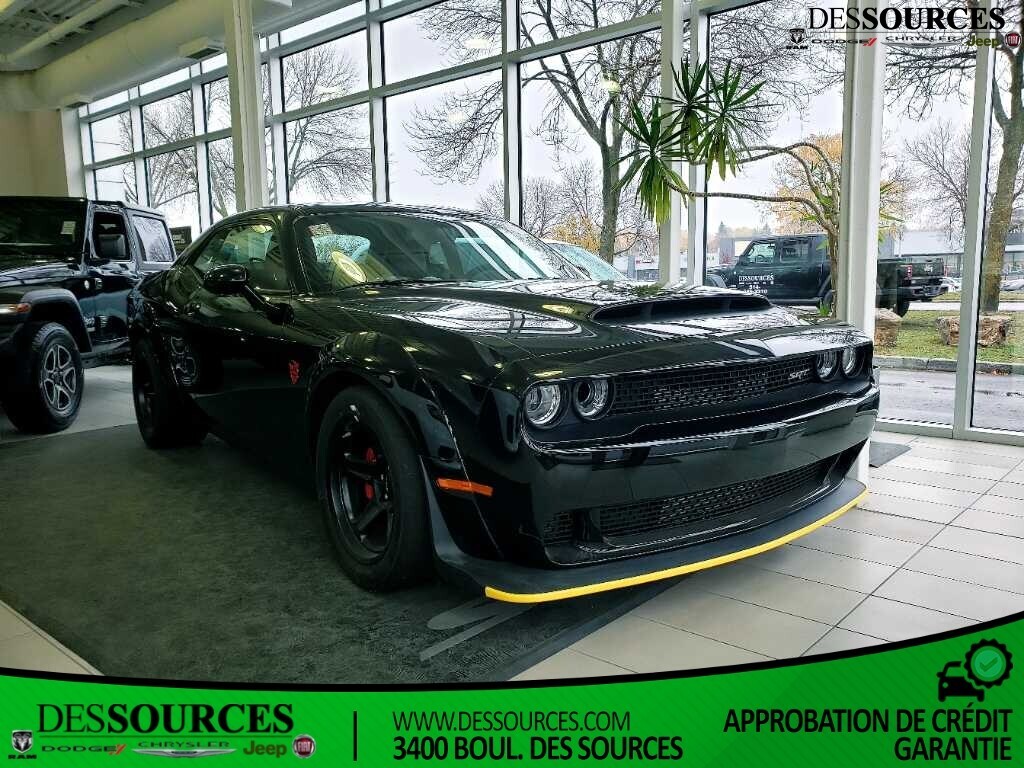 Various performance pages will tell you what your most recent 0-100 km/h time was, or your reaction time, or how many g’s you pulled in that last off-ramp, or under hard acceleration when your neighbour hopped in for a spin.

What’s less than impressive is the voracious fuel consumption. It’s not a major surprise, but we saw 19.9 L/100 km, compared to its official 15.1 L/100 km overall figure. And even that higher figure will ding you for a federal government mandated $1,000 Green Levy, a ‘fun’ tax that will also coincide with higher tire bills too, if you exercise this car’s straight-line strengths.

Which will be hard not to do, because as much restraint as this car makes you practice, its owners will likely live for the times when it can let out the beast. Whether the decision comes down to the heart or the adrenaline-producing part of the brain, the Challenger Hellcat is a car that speaks to one’s primordial automotive urges.

About Michael Bettencourt
Michael Bettencourt has been writing about cars and automotive topics for over 25 years, with over two decades as a member of the Automobile Journalists Association of Canada (AJAC). A journalism graduate of Ryerson University, he has won multiple awards for technical, vehicle testing, and green vehicle writing. Currently a judge for the Electric Vehicle Dealer’s Association awards, he bought his first EV in 2011, and follows the EV industry closely.
Follow me
You may also like
7.8