SAN DIEGO – Walking through Beverly Hills, before picking up the redesigned 2019 Mercedes-Benz G-Class to drive to San Diego, I noticed the count was dead on: on six blocks, there were six of the last-gen G-Class wagons, one parked on each. It looks like bling is still a thing.

Truly, the damn thing has won me over.

And it still will be, with the introduction of the 2019 G 550 and AMG G 63. They’re both all-new: while the vehicles retain their cinderblock styling, Mercedes-Benz says only the door handles, spare tire cover, and headlamp washers are carried over. There’s a new double-wishbone front suspension, new engine in the AMG version, new nine-speed automatic transmission in both, and more selectable drive modes. It’s also longer and wider, with more ground clearance and with improved off-road angles and water-fording depth.

I have to admit that, despite its popularity in Beverly Hills, the last-generation G-Class impressed me not. The seats were cramped, the adjustable suspension was either wallowy-soft or kidney-bruising hard, and just putting it into off-road mode was a chore.

But that’s all in the past, as the redesign handles all of those issues. Truly, the damn thing has won me over.

If you’re up in that snack bracket anyway, you might as well consider spending the extra cash. The G 550 uses a 4.0-litre bi-turbo V8 that cranks out 416 horsepower and 450 lb-ft of torque. The AMG G 63 loses its previous 5.5-litre V8 for its own 4.0-litre bi-turbo V8, built following the AMG rule of one person assembling the engine from start to finish, and beefed up to 577 horsepower and 627 lb-ft of torque. Along with wild acceleration, you also get crisper steering and sportier handling than its G 550 sibling. I took it along some very twisty roads leading to Ocotillo Wells, where 85,000 acres of desert, hills, and dunes are set aside as one very large amusement park for serious off-road vehicles.

And that is what’s both glorious and ridiculous about the G-Class. It’s one of, if not the most capable off-road vehicle you can buy – and virtually no one who owns one ever goes farther off the pavement than missing the driveway and putting a wheel onto the lawn. It was originally created as a military vehicle back in 1979 and it’s never lost that ability, but that capability today is used almost exclusively for bragging rights and nothing more.

I bucked the trend at Ocotillo Wells, taking the G 550 through a number of exercises including climbing a 45-degree hill, crawling over rocks, and going up one side of a sand dune and down the other. (The AMG G 63 has the same four-wheel ability, but its lower-slung exhaust reduces its ground clearance.) 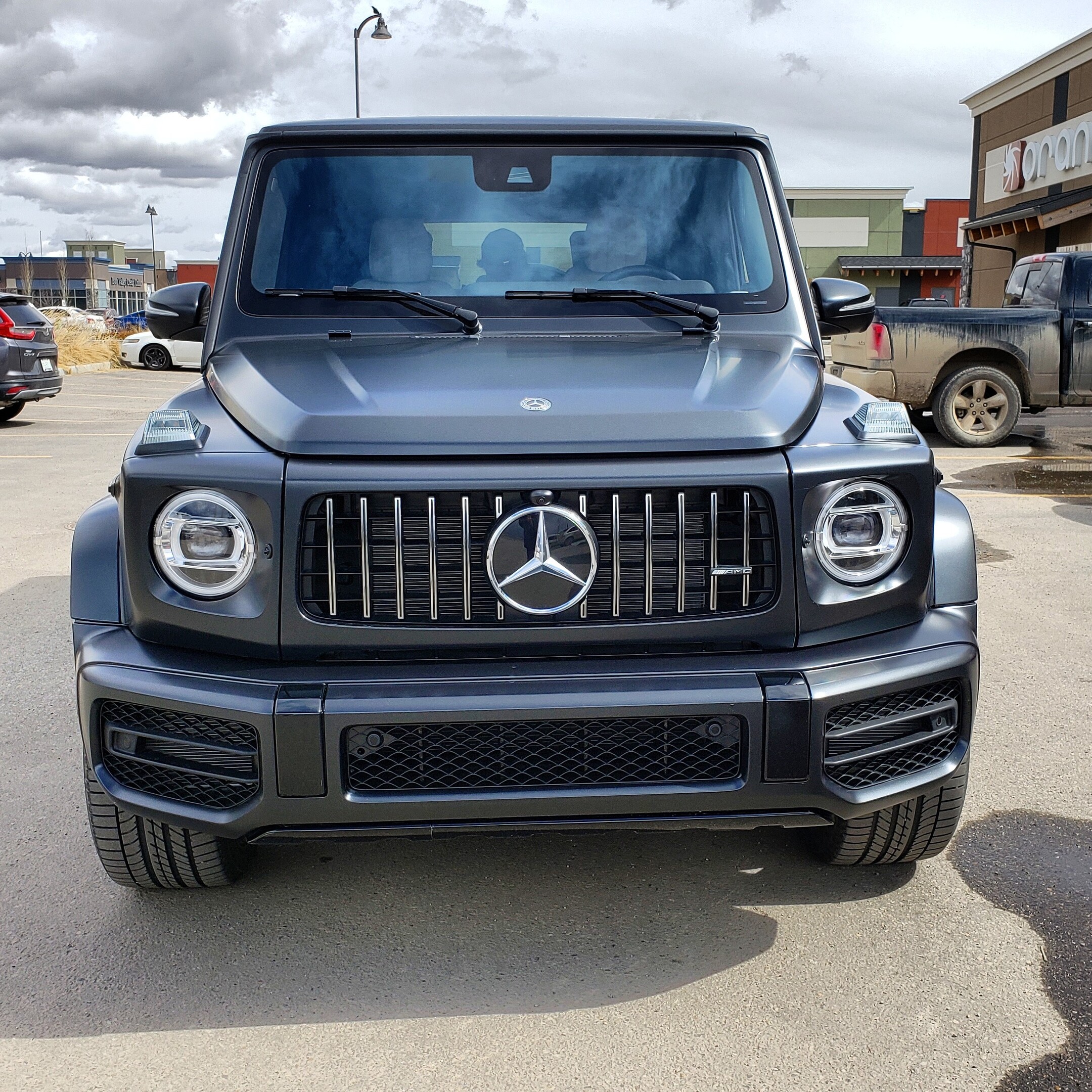 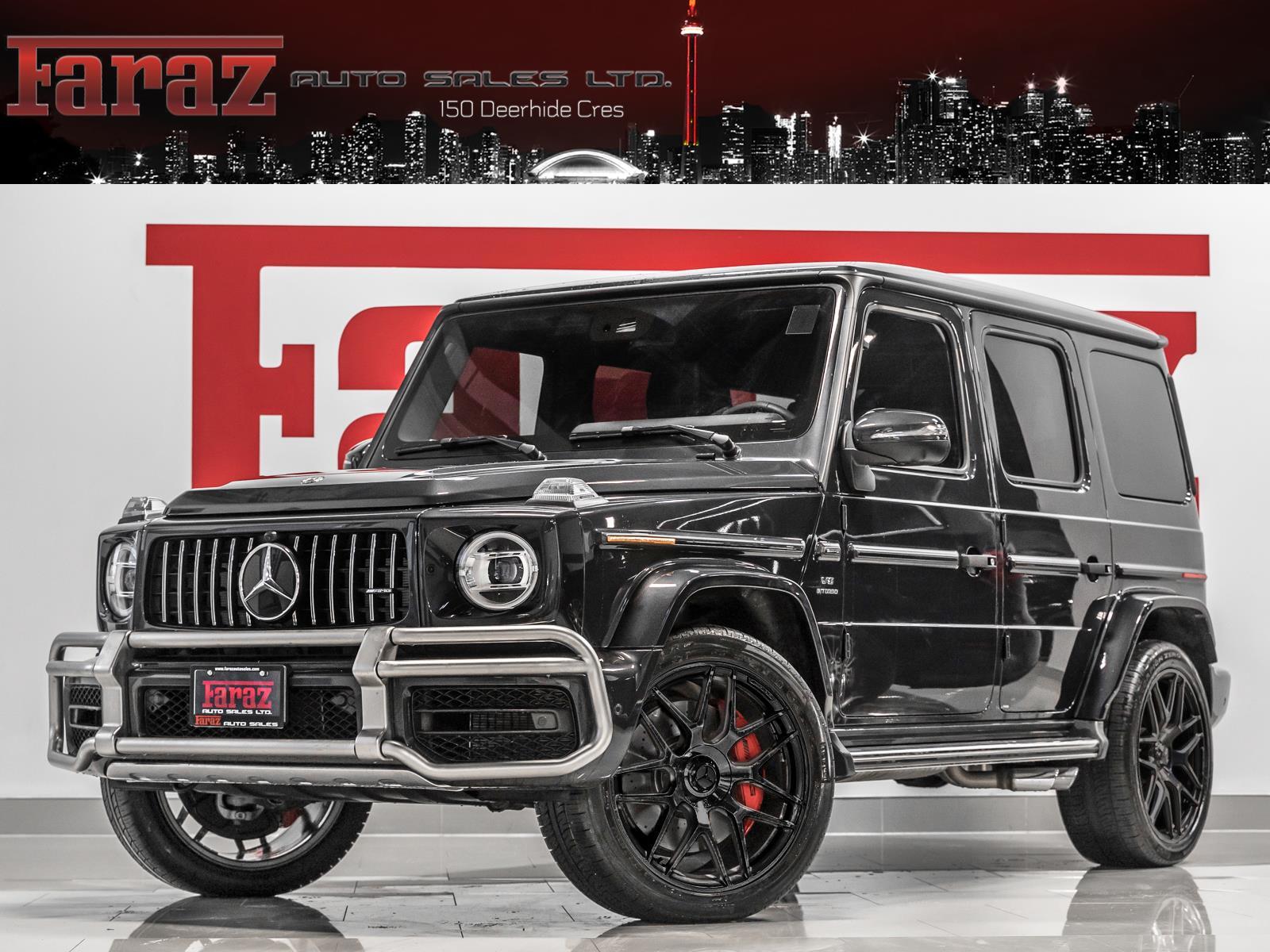 The magic formula is three buttons on the dash that control the locking differentials. Under normal conditions, including on the street, the G-Class distributes torque 40/60 front-to-rear. The first button locks it in 50/50, while the second button puts 50 percent to the front, and 25 percent individually to each rear wheel. The third button, for the toughest stuff only, sends 25 per cent of power to each corner. Downhill descent control is handled by putting the transmission into manual mode and then selecting first or second gear, depending on how fast you want to head down the hill.

Mercedes-Benz tests its sports cars on the Nürburgring, but for off-road, the benchmark is Schöckl Mountain near Graz in Austria, where the G-Class is built, and where the vehicles have to handle up to 60 percent gradients and 40 percent lateral inclines. Just as Jeep puts its “Trail-Rated” badge on models that have passed its tests, the G-Class boasts a “Schöckl Proved” medallion on the inside of the B-pillar.

For the miniscule number of buyers who actually do get their G-Classes off the pavement, the all-new model has 24 cm of ground clearance, 30-degree angle of departure, 31-degree approach angle, and it can ford up to 70 cm of water, with a waterproof rear camera and a system that automatically closes the engine’s entry points if there’s any danger of water getting in.

But we’re back to looking at Beverly Hills – the United States is the globe’s largest market for the G-Class, and California accounts for the bulk of those sales – where there’s no limit for luxury. The new G-Class delivers that in a very impressive cabin makeover. Last year’s model looks almost work-truck-like compared to the new one, which features a handsome dash with 12.3-inch screens, round vents that mimic the shape of the headlamps, and leather throughout.

There’s still a grab handle, since there must be some reminder of its rough-road prowess. Fortunately, the designers didn’t keep the last-generation’s cupholder, which was – if you can believe it – a little webbed basketball net that hung off the side of the console and precariously held a single cup of java. There are now proper cupholders for one’s latte. And, most importantly, there’s room for every passenger to be comfortable. Despite the vehicle’s size, the last-generation G-Class devoted most of its space to the cargo area, and left very little for people. I’m just 5'4" and yet the driver’s seat was tight for me.

Given how much I disliked the last G-Class, I really have only a couple of minor complaints about this one. The infotainment screen’s icons are intuitive and easy to use, but everything must be done via the console-mounted joystick and dial, rather than a touchscreen which is far easier to use. And while the slam-’em-shut doors were considered too iconic to toss out, it can take a couple of attempts to actually close them from the outside, despite their being deemed more “soft-close” than before.

Along with the interior, the on-road manners are undoubtedly the most noticeable improvement. It now feels and drives like an SUV rather than a heavy-duty 1980s truck, thanks to a longer wheelbase and that independent front suspension (the rear is still a solid axle for strength). It still has its limits in the corners – this is a tall truck, after all – but it takes the twisties far better than it did, with the AMG G 63 hugging tighter and exhibiting less understeer than the G 550. On the old one, you even had to crank the wheel back after you made a turn, but that’s just a memory now.

Despite all its changes, the G-Class is going to remain the strangest business proposition in the auto industry: its buyers drop cubic dollars and then some for it, and then never use 90 percent of the capability for which they paid so dearly. But what’s important is that the stuff they do care about – how good it looks and feels inside, and how it drives down the street – is now, finally, in line with what they’ve shelled out for it. And hey, if it can win over a hater like me, the engineers and designers have definitely done their job.

About Jil McIntosh
Jil McIntosh writes about new cars, antique and classic cars, and the automotive industry. A member of the Automobile Journalists Association of Canada (AJAC), she has won several awards for her writing, including Journalist of the Year in 2016. In addition to testing new vehicles, she owns two from the 1940s.
Follow me
You may also like
AdChoices
Latest Articles
﻿