The eighth generation of one of the most iconic and timeless shapes in automotive design is here. The all-new 992-generation of the Porsche 911 has arrived. And it’s arriving first as the Carrera S and 4S.

Like you’d expect, it looks like a 911. The company isn’t reinventing the wheel here. And they’re aware of it. So instead of broad swaths of new, there are small changes. Not that it’s not an all-new design, but it’s made up of incremental new shapes. Small changes that add up to a car that both looks just like the car it replaces and at the same time very little like it.

The more things stay the same…

The overall shape, for example, is quite similar. But look closely at those wider wheel arches. The car is 45 mm wider at the front wheels. Even better for those who want the widebody look, all Carrera S models will get rear fenders that match the dimensions of the old GTS. That means 1,852 mm wide. Under those fenders go new 20-inch wheels in the front and 21-inch versions in the rear.

The car is loaded with new detailing, like the LED light strip running across the tail. And the vent slats on the rear deck that almost convince you that there’s still an air-cooled engine in the back. Look past those multi-element LED headlights and you’ll see the return of the hood-crease to the car. Just like the original.

At the rear, there is also a new spoiler. The aerofoil is much wider than on previous cars, with various positions for variable downforce. That new body is aluminum, with the exception of the bumpers, which should trim some kilos on the scales.

The flat-six that is Porsche’s bread and butter has been redesigned for the new car. The company says it has a new injection process, along with new turbos and a new charged air cooler. It means 443 hp from the 3.0L engine in the 911 S and 4S. That’s nearly equal to the power output of the current GTS models, and 23 more than the outgoing S cars. It puts both the S and 4S well under the four-second mark to 100 km/h, the automaker says. The C2S can hit it in 3.5 seconds and the C4S in 3.4. Add to that a top speed of 308 km/h for the rear-driver and 306 for the all-wheel-drive 4S. Tick the options box for the Sport Chrono pack and cut the 0–100 time by 0.2 seconds.

The newfound power is channelled through a new gearbox. The new PDK box gains an eighth gear. A manual transmission was nowhere to be found at the event, nor will one be available at the car’s launch. But don’t worry: A three-pedal option will be coming. 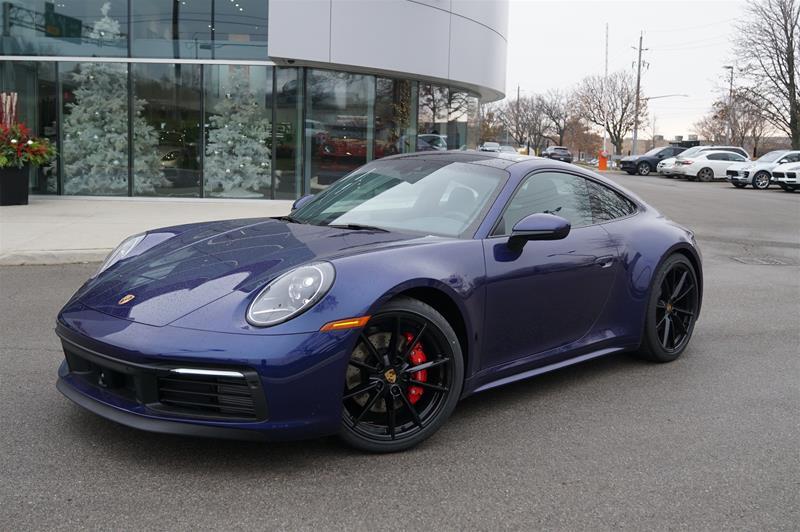 App all the things

If you’re worried that with great power comes great responsibility, Porsche is looking at going green.

That’s through a new Porsche Impact smartphone app. It monitors your estimated CO2 emissions from your enthusiastic driving (and from being stuck in traffic, too, but that’s no fun). It then lets you contribute to certified climate projects to offset your footprint.

Porsche has gone deep down the app wormhole with the newest 911. On top of that Impact app is a Porsche Road Trip app. It helps enthusiasts plan, organize, and navigate road trips using curated routes. It will also give you viewpoints and hotel and restaurant recommendations. Finally, there’s a new Porsche 360+ that works as a virtual concierge: It’s available to anyone, customer or not, and can assist with the every day or exclusive experiences. However, the apps won’t be available in Canada at launch, and a company spokesperson couldn’t say if they will be later on.

The interior has been completely redone. The dash looks more like the cars of the 1970s, with straight lines and sunken instruments. Beside the big centre tachometer are a pair of frameless screens that can be adjusted to display the information the driver is looking for. Under the infotainment display is a five-switch panel that give the driver easy access to some of the most important vehicle functions.

A new 10.9-inch infotainment system screen is home to the PCM system. It’s a new architecture that Porsche says can be operated quickly and without distraction, and that’s a big jump over the 7.0-inch screen found in the last car. 18-way adaptive sports seats are now on the options list.

The car gets new assistance systems. That includes a new Wet mode that detects water on the road. It then adjusts the control systems, including stability control and ABS, accordingly. It also warns the driver. There is standard brake assist and warning that detects collisions with moving objects and can start emergency braking.

Porsche has also added a new Night Vision Assist that uses a thermal imaging camera. It’s the first time for the system on a 911 that helps drivers spot obstacles like animals or pedestrians in the dark.