Toyota’s been doing quite well for itself lately with the RAV4.

It’s a good thing Toyota is heavily invested in putting the hybrid powertrain forward as a no-compromises solution because, frankly, it’s far and away the RAV4 I’d most consider buying.

Well, guess what – you can take all of that and throw it out the window.

Toyota’s about to release a new fifth-generation RAV4, and it bears so little resemblance to the outgoing version that it’s essentially rebooting the nameplate from scratch. As Chief Engineer Yoshikazu Saeki said, “There are bolts and washers in common with the previous model, but everything else is brand-new.”

No question: it’s a bold move. And a highly unusual one, considering that what Toyota already had hardly seemed in need of rebooting.

The decision to start over is predicated on a few things. For one, Toyota thinks that people want greater variety in grade offerings so that their vehicles more precisely suit their personalities and lifestyles.

The company is also looking to double the nameplate’s hybrid sales, which currently sit in the range of 10 to 15 percent, by closing the price gap between gas-powered and hybrid models and touting the latter as not requiring any compromises.

There’s no doubt that the new RAV4 will sell, aided by the fact that every unit sold in Canada will be built in Canada at Toyota’s manufacturing facilities in southern Ontario. But will it be the best vehicle out there for the majority of buyers? The answer depends on what those buyers will consider the most important factor in their decision.

The current RAV4 grade structure goes more or less like this: LE, XLE, SE (S for sport, but the mechanicals are all the same, so this is more of a sport-look trim), Limited; and then a similar substructure with the hybrid powertrain.

In the new RAV4, there’s a lot more differentiation. You’ll find the established L-grade structure, plus a more rounded sport offering – including a new XSE sport grade, which will come only with the new hybrid powertrain, a change that will make sense as you read on – as well as a new off-road-oriented Trail grade.

Everything is based on the new Toyota New Global Architecture platform, which already underpins the newest Camry, Avalon, and Lexus ES. This brings about some measurement changes: the new RAV4 has a 30 mm longer wheelbase (most of which has gone into the rear seat) with a 35 mm wider front track and 45 mm wider rear track, and it’s 10 mm wider overall. The front and rear overhangs are shorter for better off-road manoeuvrability, and the new body is 57 percent more structurally rigid.

The new platform also brings along a new set of powertrain configurations. Both the gas- and hybrid-powered models are propelled by a 2.5-litre Atkinson-cycle four-cylinder engine, the same one that launched on the 2018 Camry, but it’s tuned here to be more suitable to a heavier SUV. In the gas-powered iteration, it’s paired with an eight-speed automatic transmission and is good for 203 hp and 184 lb-ft of torque at 5,000 rpm. In the hybrids, this same engine is mated to two electric motors to produce a total of 219 combined hp and comes with an electronically controlled continuously variable transmission.

Some other interesting technical points worth noting: The Limited and Trail grades come with a torque-vectoring all-wheel drive system that can send 50 percent of available torque to the rear wheels and distribute it from left to right to enhance handling in cornering or low-traction situations, and it can also fully disengage the rear axle to improve fuel economy on highway runs.

Go for the hybrids

After driving a variety of different grades through the winding roads of California’s Carmel Valley, I concluded that it’s a good thing Toyota is heavily invested in putting the hybrid powertrain forward as a no-compromises solution because, frankly, it’s far and away the RAV4 I’d most consider buying.

All models benefit from the new platform’s very flat and comfortable handling and pleasant steering feel, but the gas-powered model leaves me feeling like I’m urging it through the lower end of the rev range – Toyota has remained staunchly in favour of naturally aspirated engines while many competitors are turning to turbocharging, which means it takes a lot more right foot to get to the peak power band – and the eight-speed automatic has a tendency to hold onto gears and hesitate to kick down more than I prefer.

The hybrid version, on the other hand, is peppier and more energetic. It has that characteristic initial kick of torque that fills in that early power gap very nicely, the transition between the electric motor and the internal combustion engine is nearly imperceptible and, surprisingly, the eCVT feels nicer and more natural to roll through than the eight-speed does. And with the battery being tucked away under the rear seat, there’s zero interior space penalty for choosing it.

Toyota hasn’t announced the pricing for the hybrid models yet as they’ll hit the market a little later than the gas ones, but the company’s stated goal is to reduce the cost gap between the gas and hybrid models in this generation. If it lands the newer hybrid models more within the realm of affordability than the outgoing version, it’s tough to come up with a reason not to go that route. It should save a fair bit of coin at the pumps, too, though official fuel economy numbers aren’t available just yet. For reference, the gas versions come in at 8.8 / 6.7 / 7.8 L/100 km city / highway / combined for front-wheel drive; 9.2 / 7.1 / 8.3 L/100 km city / highway / combined for all-wheel drive. 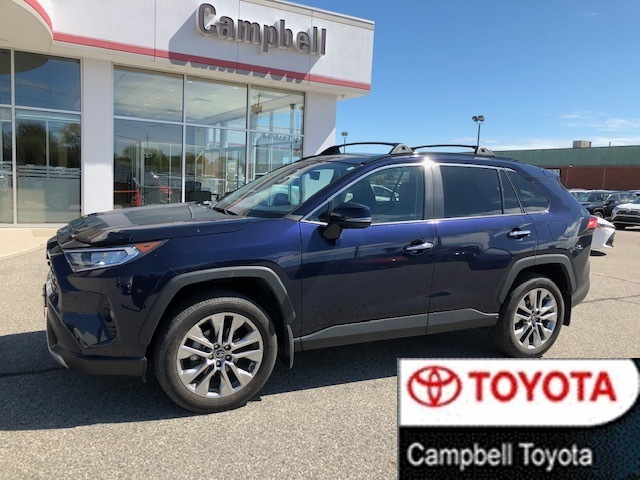 To my eye, the biggest shift in the new RAV4 is its appearance. Sharper, more upright angles all around the exterior give it a look that’s sturdier and more truck-like. It grows on me a little more every time I come back to it – oddly floating wheel wells aside, I enjoy the differing grille shapes for the standard and Trail grades and the treatment on the floating roof, which comes in an offset colour in some models – but it is such a dramatic departure from the outgoing model’s feminine, flowing lines. Will RAV4 devotees be on board? Only time will tell on that point.

The angular look follows through to the inside, where the door handles and vent accents stand out with distinct shapes that mimics the lines of the grille. Hybrid grades are available with distinct and subtle blue accent stitching, and even the lower trims have some attractive two-tone colour combinations. Compared to the previous generation, the quality here is a noticeable step up.

The 8-inch infotainment screen is nicely laid out with the important controls comfortably within reach. In fact, the entire centre console feels thoughtfully constructed. Finding a particular feature doesn’t take a great deal of hunting.

Something worth looking for is that the cars on our test drives seemed to let in more exterior noise than many of the RAV4’s contemporaries. However, these were pre-production units, so it’s possible this issue will be resolved in the ones you’ll find in dealerships. Toyota was also touting the droppable load floor in the cargo area that can make room for an extra 5 cm of height, but in practice this doesn’t seem as though it would ever make much of a practical difference.

The new RAV4 comes with Toyota Safety Sense 2.0, an updated version of the suite of safety technologies Toyota has been offering as standard on all new vehicles for the past couple of years. It still includes the original four features – pre-collision avoidance with pedestrian detection, dynamic radar cruise control, lane-departure alert with steering assist, and automatic high-beams – and adds on a new lane-tracing feature that keeps the car in the centre of the lane, and a brake hold system to engage the brakes from the point when the vehicle reaches a stop until the driver hits the accelerator pedal.

We’ll be getting 100 percent Canadian-built cars in the Canadian market, which comes with benefits such as skipping import costs, supporting the economy, helping our neighbours have secure jobs, that sort of thing. However, with this launch, it does bring with it one quirk: You’ll see RAV4s driving around with panoramic sunroofs in other markets, but Toyota’s Ontario manufacturing facilities aren’t equipped to install those. That means there will be no panoramic sunroofs for us here in Canada.

That said, the list of standard features is otherwise impressive. There’s the aforementioned Toyota Safety Sense 2.0, a 7-inch infotainment screen with Apple CarPlay (but not Android Auto), LED lights all around, blind-spot monitoring and rear cross-traffic alert, heated front seats, roof rails, and auto up/down on all four windows. For the front-wheel-drive LE model, this all comes in at just under $28,000.

There’s an available digitally projected rear-view mirror offered on the Limited models in the same style as Cadillac has become known for – I’ve never been able to get my eyes to adjust to them well, but they are useful if you frequently have tall passengers or tend to overload your cargo area.

If I could only afford one of the gas-powered versions of the 2019 Toyota RAV4, a search for more pleasant powertrain dynamics would likely lure me elsewhere. But should the hybrids come in at an affordable price point – or were I not the sort of person to be overly concerned with pedal feel – I’d give the new RAV4 a very serious look. Its balance of features, handling characteristics, interior design, and price propel it far up the list of compelling offerings in its segment.

Trim walk and (some) pricing

Arriving in spring; pricing to follow closer to launch.

All 2019 RAV4 Hybrid models come with standard all-wheel drive to go with the 2.5-litre four-cylinder engine paired with the dual-electric-motor hybrid system and an electronically controlled CVT, plus the same features as the gas-powered LE AWD and dual-zone automatic air conditioning and an Eco mode dial.

At the top of the line on the hybrid side, the features include everything that comes with the XSE (except the bumper protector and grade-specific exterior badging) with the Technology Package plus the bird’s-eye view monitor; heated rear seats; driver’s seat memory; ventilated front seats; hands-free power liftgate; chrome outside door handles; unique 18-inch alloy wheels; interior ambient lighting; a coloured front grille; and front door puddle lamps.