I've always hated the Toyota 86 – and its predecessor, the Scion FR-S. But bear with me for a minute. I have a good reason.

In a way that has been nearly eradicated since the changeover to throttle-by-wire, the 86's gas pedal feels directly connected to the intake butterfly. And your right foot.

Okay, maybe it's not a good reason. Maybe it's a petty reason. Fine. Yes, it's a very petty reason. It's all a matter of timing. The FR-S and its Subaru twin arrived in Canada over the winter of 2012. The same time I bought a very old and very used 1990s BMW 328iS. When I bought that BMW, it was at the sharp end of the STX class in regional autocross competition. That's a motorsport discipline where the course is set up in a parking lot, and made from pylons. Fastest time around the cones wins. I bought the car as a big upgrade from the car I was already using.

I didn't know that the FR-S was about to arrive in a big way. A car that fresh out of the box, with tires originally intended for an economy car, would instantly become a class champion. And not just its own class, it was able to outrun cars in even quicker classes. It was definitely able to outrun mine. And that was before the ever-industrious aftermarket stepped in to offer suspension, wheel, and tire options to make the Scion ever faster and more uncompetitive. Okay, it was me that was uncompetitive – because the new cars were quicker.

So that's why I hated the Scion FR-S, and then the Toyota 86 once the car rejoined the Toyota fold: I couldn't beat them on the track. My choice of car was instantly made irrelevant. But I had never really spent time behind the wheel of the cars, just behind them on the timesheets. After finally getting to know one, would I still hold a grudge, or would it be time to bury the four-cylinder hatchet?

Fire up the 2019 Toyota 86 and the 2.0L flat-four gives you something that's getting increasingly uncommon in modern cars: noise. This engine is far from quiet, especially idling on this cold late October afternoon. It makes all sorts of mechanical noises, with clanks, whirs, clunks, and rattles. Which is exactly what a sports car engine is supposed to do. This is a good start. This isn't the noise of a midsize SUV that has been shorted on sound-deadening. This is character. And feel. With those rattles comes a vibration through the wheel. Just enough to let your fingers know that something interesting is going on here.

Ready to set off, I reached for the leftmost pedal and the gear shift. Except that my test car has only two pedals. Toyota has done a great job of making the automatic's shifter look like a manual. Enough to trick me briefly, though I can't help but worry that I won't get the full 86 experience. Turns out I don't need to worry about missing anything.

The first thing I noticed once I started driving the 86 was the throttle response. In a way that has been nearly eradicated since the changeover to throttle-by-wire, the 86's gas pedal feels directly connected to the intake butterfly. Brush the loud pedal and the engine instantly responds. It's downright snappy when you go to pull away. In stop-and-go traffic, it's enough that I ended up in "Snow" mode in order to start off in second gear and smooth out the brief edging of going nowhere quickly on Ontario's Highway 401.

Get off of the highway, and that throttle response is sublime. Need to find a gap in traffic? Stretch your right ankle an inch or so. Need to tuck the nose back in because you underestimated just how sharp that off-ramp really was? Ease your toes off of the pedal and the nose instantly tucks back into line. There's no hunting for the right throttle position here, trying to anticipate what the electrons will decide you really want. Here the accelerator does exactly what you want it to do.

The next thing to notice is the steering. On the move, the steering tingles in your hands, loaded with feel. On the highway, it can get somewhat tiresome. The 86 is always dancing, floating around the lane. Left and right corrections are required nearly constantly, like a tweaker who has been looking for a fix for too long. Only here, the high isn't pharmaceutical. It's looking for the next bend. Or the next cloverleaf, roundabout, road course, or serpentine stretch of pavement.

That busy steering gives the Toyota 86 near-instantaneous turn-in. Add a touch of steering lock and the nose dives for the apex. Release the gas if your first guess on steering angle wasn't quite enough. Add some more throttle if you've turned in just a little too far. And if you want to leave that turn like your hair is on fire, add some more throttle angle. The rear-end of this car will dance whenever you ask it to.

The lightning-fast steering reflexes let you keep it positioned exactly where you want. The standard Torsen rear differential keeps both rear tires spinning, helping you to hold that cornering angle or accelerate away more quickly. And if anyone asks, it makes this car better in the winter too. Winter tires and a limited-slip differential add up to serious winter chops compared with an open-diff front-driver.

My test car was actually on winter tires, appropriate since there were flurries more than once during my time with it. That makes the sharpness of the steering even more impressive. Toyota's choice of winter tires was a good one, but even the best of the breed loses significant sharpness compared to a set of summer-oriented rubber.

In the world of small and affordable sports cars, only one other car offers up a similar combination of steering feel and engine response: Mazda's MX-5. If that wasn't the dynamic target for this car, then Toyota's done an amazing job of independently arriving at the same spot.

The car's 2.0L four offers up 200 hp with the automatic (205 with the stick), along with 151 lb-ft of torque (156 with the manual). While those are far from impressive numbers, in a car that weighs just under 1,300 kilos it's enough. Sure, 50 hp more would be nice, and it's not enough to run with big V8s or turbo flat-sixes on a drag strip or a straightaway.

But it's enough torque to unexpectedly send the rear end seriously sideways when I tried to fit the car into a fast-moving gap in the left lane. And more power would be missing the point of a car like this. It's quick enough for any traffic needs, but slow enough that you can keep your foot on the floor longer.

Let the revs climb to redline and listen to the almost air-cooled Porsche soundtrack from underhood. Arrive at the next corner quickly, but not so quickly that you need to cut it in half to make it around the next bend. The six-speed automatic responds quickly, especially in sport mode. Use the paddles and it even matches revs on downshifts to help smooth things out in the power delivery department. It's not quite as involving as a clutch and shifter, but taking the auto doesn't mean you're missing out on the handling and other responses here.

And while the MX-5 will let you take a friend, the 86 will let you take a friend and some luggage. Or some grocery bags. But despite the rear seats, don't expect to bring three friends with you. Toyota says that the back seat of this car offers up 759 mm of legroom, but that figure has to come with the driver's seat in a very strange position. Like sitting beside the car on the shop floor. The heavily bolstered front seats barely leave room for a sheet of paper between their backs and the edge of the rear seats – at least with this driver behind the wheel. Maybe a child seat, or your dog, or a gym bag. There's enough room for those, though I'm not sure how you'd get the child seat back there in the first place.

The cabin is tight, but even for this driver, who has a tough time fitting into many midsize sedans and subcompact crossovers, there is enough room to get comfortable. The seats are tight and hold you tighter, which makes it easier when you want to drive quickly. The "suede-like" seat and dash inserts, as Toyota labels them, feel and look like real suede to me. They also help the seat grip you firmly. And on the doors and dash, they go a long way to making the small cockpit feel cozy instead of cramped.

But firmly between those inserts lies the 7.0-inch display audio system. When this car launched, the system's aftermarket appearance was probably a plus. A few years down the road, and this might be the only part of the car to really look dated. It's slow, and it's lacking not just Apple CarPlay and Android Auto, but any sort of navigation option. The built-in USB port charged my phone at a rate that left the battery lower when I arrived than when I set out. And that's on trips that took up to two hours. At least the quasi-aftermarket setup makes it easy to fit a nav-equipped touchscreen after purchase.

That lack of a navigation system might be the car's biggest flaw. Because it points you at the car's twin from Subaru. See, at the mid-$30s price of this car, there are a few rear-drive sports car options. Like the Nissan 370Z, Ford Mustang EcoBoost, and Chevrolet Camaro. And those three offer up significantly more power than the 86. But they're also much bigger and much heavier – around 250 kg for the Nissan and Camaro, and just shy of 600 kg for the Ford.

And no matter how they try, they can't match the immediacy and tactile feel of the Toyota. Which is one of the only times that those words will be uttered. Back to the Subaru: Because while it is arguably a touch softer than the Toyota, it's near enough to make no difference. But the Subaru offers up navigation. And it's cheaper.

If you're looking to arrive everywhere with smoke coming from the tires, then don't bother looking Toyota's way. But if you're looking for something that offers up a connection to the road that mostly disappeared in the 1990s, then this is one of your only choices. As long as you don't need to bring too much cargo or too many passengers.

Do I still hate the Toyota 86? Absolutely not. At least not until racing season starts again, and they start piling up in front of me on the timesheets. 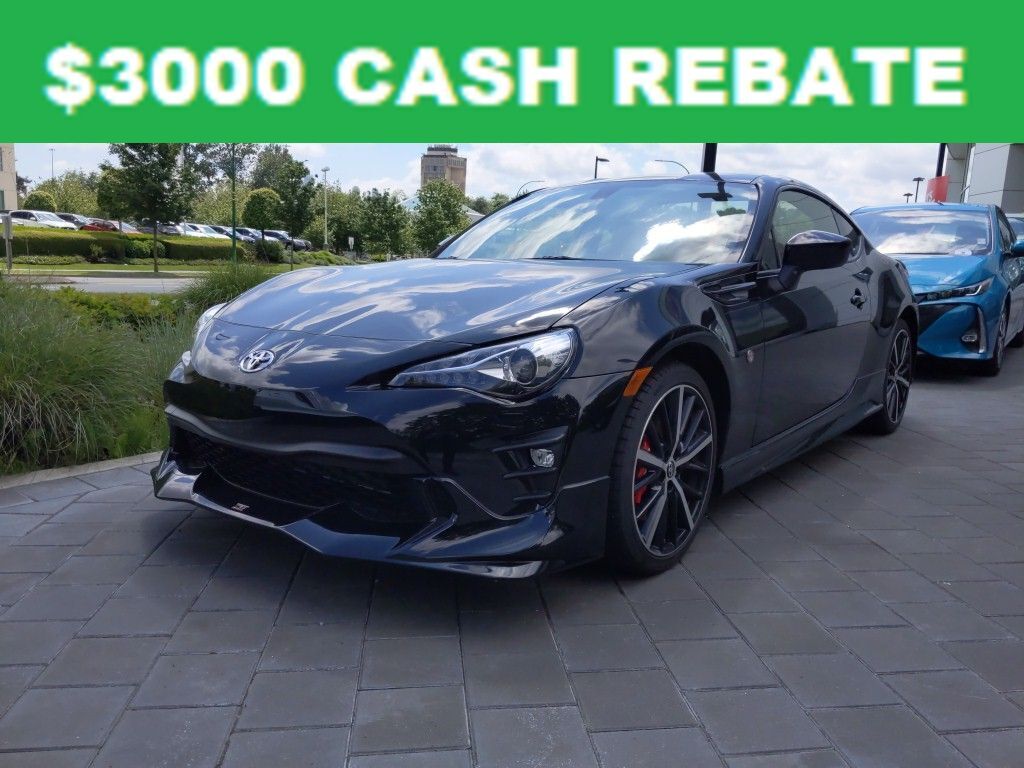 About Evan Williams
Evan has been covering cars for close to five years, but has been reading about them since he was 2. He's a certified engineering technologist and a member of AJAC. If it moves and has an engine, Evan's probably interested in it.
Follow me
You may also like
6.6