When it comes to mid-size SUVs there’s no shortage of choice, yet Kia’s Sorento manages to stand out from the crowd thanks to its well-rounded blend of just-right sizing, plentiful available features, excellent safety ratings, handsome exterior styling and a well-appointed interior. The icing on the cake is Sorento’s competitive pricing, especially when calculated on a features-for-price basis.

The third-generation Sorento was introduced in North America for the 2016 model year, and for 2019 it has received a mid-cycle refresh. Changes include revised styling, a new eight-speed automatic transmission for V6 models, standard third-row seating for LX V6 and higher trims, a new steering wheel design, and a streamlined engine lineup.

There are now just two powertrain options: a 2.4L four-cylinder that makes 185 hp and 178 lb-ft of torque and uses a six-speed automatic, or a 3.3L V6 that churns out 290 hp and 252 lb-ft of torque and uses the new eight-speed transmission. The 2.0L, 240 hp turbo-four engine has been discontinued, and a promised diesel engine option has reportedly been scrapped, with Kia executives citing logistical challenges associated with establishing a maintenance and repair network for a low-volume powertrain option.

The styling tweaks for 2019 include new light clusters both front and rear, a slightly different grille, and new front bumper and rear valence. The new front lights are a distinct improvement to my eye, because by moving the signal lights to below the headlights, Kia has replaced the Sorento’s previously rather surprised-looking countenance with a bit of a “don’t mess with me” squint. The rest of the changes are subtle to the point of being almost unnoticeable, but that’s not a bad thing – it means Kia hasn’t messed with success.

For families with only occasional need for seven seats, the Sorento fits comfortably somewhere between “big enough to fit grandma in the third row” and “small enough to easily park downtown.” It took a bit of nipping and tucking for Kia to fit three rows into a package not much larger outside than most two-row SUVs, so third-row legroom is tight unless you move the second-row seats forward a little. That said, I filled all three rows with adult passengers for a 40-minute drive and nobody felt unduly cramped – indeed the only comment I got from the very back was how nice it was to have their own climate control. The one caveat is that with the third-row seats deployed, luggage space is extremely limited.

The first and second rows, meanwhile, are properly roomy and comfortable, with my tester’s top-trim SXL package adding soft, perforated Nappa leather upholstery. With the SXL trim the first-row perches get heating, cooling, and eight-way power adjustments (plus four-way lumber adjustments for the driver), while the rear seats are heated and have 40/20/40-split-folding and recline capability.

Up front, the dash layout is simple, easy-to-use, and upscale-looking. Primary climate control and audio functions are taken care of with proper knobs and buttons, and Kia’s UVO2 infotainment system offers reasonably intuitive control of most secondary functions. Despite not having driven a Kia for some time, I was able find my way through the menu system easily and with only a minimum of missteps (it took me a couple of tries to locate the audio settings menu, but then again I was driving on a busy highway at the time).

I particularly liked the instrumentation, which uses crisp, easy-to-read white-on-black gauges. The speedometer dial is actually a virtual display, allowing it to be subtly coloured up to your selected speed when you engage the adaptive cruise control. This makes it easy to see at a glance whether traffic is currently moving at or below your desired speed. It’s a smart bit of design. Other thoughtful touches abound throughout the cabin: there’s a 110V inverter outlet, lots of storage cubbies, and – perhaps my favourite “Why didn’t anyone think of this before?” feature – a dedicated storage spot below the cargo floor for the cargo privacy cover.

One bit of new tech only available on the SX and SXL trims is a 10-speaker Harman Kardon premium audio system, replacing the previous Infinity system. It’s a great sounding system with good presence, helped no doubt by the Sorento’s very quiet and serene ride. 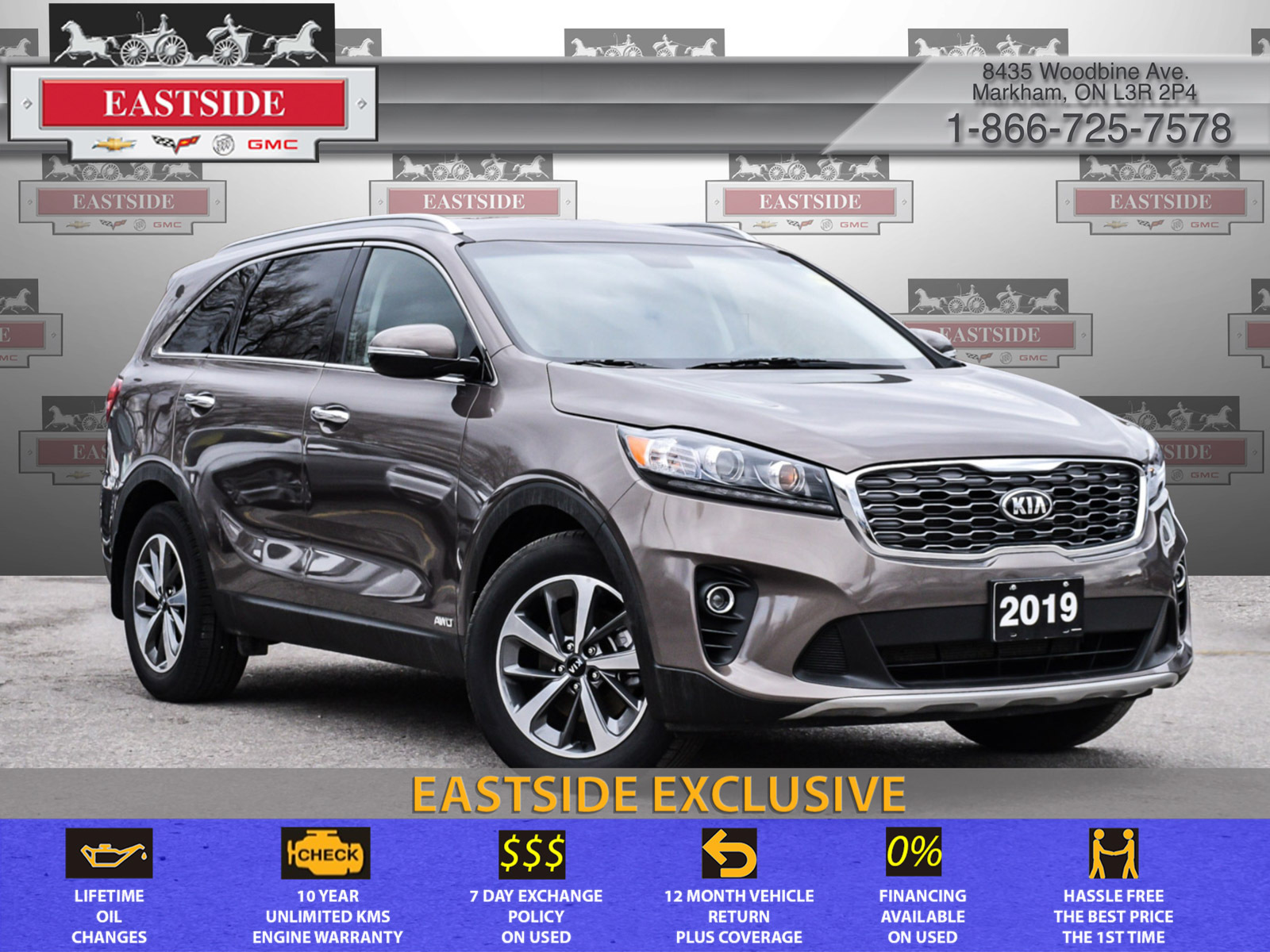 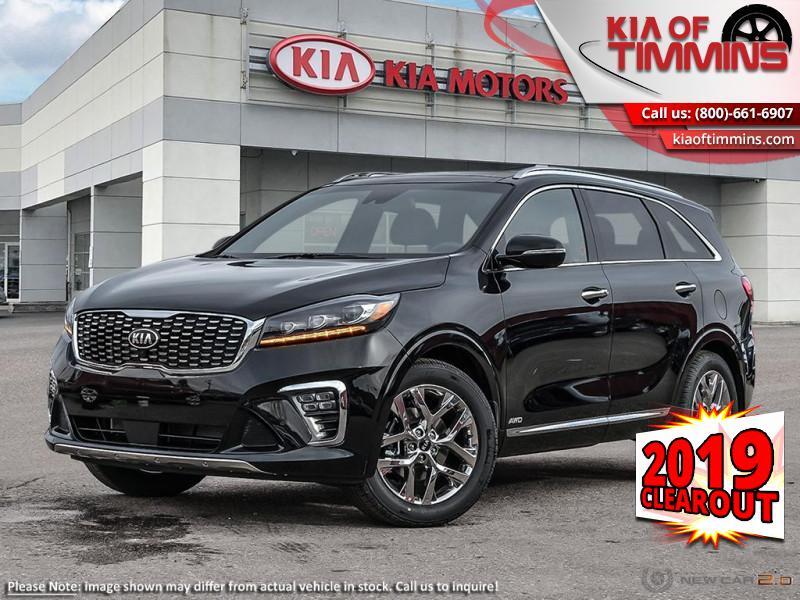 In terms of the driving experience, the operative words are capable and relaxed. The Sorento does everything it’s supposed to do with calm competence: The cabin is quiet, the ride compliant and comfortable, the handling predictable, and in the top SXL trim there’s a full array of driver assist technologies to ease the driving chores, including forward collision avoidance assist, active lane-keeping assist, driver attention alert, and an excellent 360-degree camera system. EX and higher trim gets blind spot detection and rear cross-traffic alert; and EX Premium adds front and rear parking sensors, so my test car had all that too. Backstopping the active safety systems are top crash ratings in both NHTSA and IIHS tests, earning the Sorento an IIHS Top Safety Pick+ rating.

On the downside, the ride is a little disconnected-feeling, with numb steering and precious little in terms of emotion and dynamics. If you’re graduating from a sporty sedan and looking for similar qualities in an SUV, you’ll probably be happier with a Mazda CX-9. I also found that the throttle response seemed a little non-linear at low speeds. The net result is a tendency to either crawl off the line, or push a little deeper into the throttle and take off harder than expected.

Other minor quibbles are that the mirrors will automatically unfold themselves when you approach the vehicle, which is very welcoming and high-tech, but you have to push an actual button to unlock the door, which seems anachronistic by comparison. Touch-sensitive door handles would make more sense here. I also found the A-pillars to be more obstructive than most: They are thick, sweep forward a long way, and have big mirror mounts at the base. I found myself having to be extra vigilant looking for pedestrians when turning left at intersections.

A trim level for every budget

Pricing for the Kia Sorento starts at $27,995, which gets you a front-wheel drive version with the four-cylinder engine, 17-inch wheels, cloth upholstery, and manual air conditioning. Even in base trim you get quite a few upmarket features including automatic projection headlights, heated front seats, heated leather-wrapped steering wheel, and a seven-inch display audio system with Bluetooth connectivity and Apple CarPlay and Android Auto compatibility.

If you prefer to trade power for luxury and seating space, the EX 2.4L ($32,495) offers up leather-upholstered three-row seating, although it drops the automatic climate control, satellite radio, and sound-reducing windshield. Confused yet?

Of note for the safety-conscious is that some of this equipment – such as the adaptive cruise control, forward collision avoidance assist and lane-keeping assist – is only available in the topmost SXL trim for the Sorento, whereas competitors such as Toyota offer it across the range.

Still, with the exception of some of the advanced active safety features, the Sorento offers a healthy portion of equipment across the range, and with its “in-betweener” sizing it represents an excellent option for three-row SUV shoppers.

About Simon Hill
Simon Hill rebuilt his first engine, an air-cooled Volkswagen, at 14. He started writing professionally about cars in 2009 and was also the editor of Boat Journal magazine. He lives in Vancouver, BC.
You may also like
7.7