Remember when you were a kid, and your parents told you not to make a scene? You can throw that out the window if you’re driving the 2019 BMW i8 Roadster. If you don’t get noticed rolling up, you’ll definitely draw a crowd when you open this partial-electric roadster’s upward-hinged, wasp-wing doors to get out.

The i8 is not a million-dollar supercar, but most people think it is.

This just-launched drop-top take on BMW’s plug-in exotic is a massive scene on wheels. A curvaceous outburst. A visual temper tantrum.

Vehicles styled thusly were once reserved for concept sketches and Hollywood movies where they flew around in space and shot laser beams at each other. Today, BMW fans after the brand’s most cutting-edge technology, wrapped in a truly rare and special and unique package, have the new i8 Roadster as an option.

At your service are a futuristic body concealing a plug-in hybrid driveline that serves up 370 horsepower, a fuel bill like a Ford Fiesta, and a taste of where performance cars are going. This is a rolling flagship, double-stuffed with technology from which future models will draw.

Just prepare for the attention: the shape of the i8 turns heads far and wide and transforms most nearby motorists into an exotic-seeking zombie horde. There is no peace and quiet driving the i8 Roadster in a public place, and no leisurely drive. There is only traffic swarming around for a closer look, gawkers hanging from windows, children pointing and swearing from school buses, questions shouted at red lights, and every Ram HEMI owner within 10 miles trying to hunt you down for a drag race. The i8 is not a million-dollar supercar, but most people think it is.

So, always plan extra time to explain the i8 Roadster to people, if you’ll go for a drive and find yourself outside of the car.

I was fuelling up one evening at the gas station, and the i8 had quickly attracted a five-person crowd for a closer look.

“Hmph. How does that work?” This dad and his son, maybe six, were wide-eyed and ready to learn. It reminded me of me as a kid.

Here’s the answer: in back, a 1.5L three-cylinder turbo engine drives the rear wheels, as well as a generator. That generator supplies electricity to recharge the battery pack stuffed in behind the rear seats. This battery pack can be charged further, by plugging the i8 into a power outlet or charging station. The front wheels are driven by an electric motor, which is powered by the electricity stored in the battery pack.

Put simply, a small turbocharged three-cylinder engine drives the rear wheels, and an electric motor drives the front. At any given moment, some carefully calculated combination of electricity and gasoline propulsion work at moving the i8 along.

The focus isn’t on all-out speed and grip, but rather, on blending BMW’s most extreme styling with their most current take on what’s coming to the world of partially-electric performance motoring. If that’s the sandbox within which you and your funds wish to play, it’s a compelling package on most fronts. Recent upgrades to the i8 have enabled a longer pure EV driving range, and a slight bump in power output too.

The new roof is glorious: beautifully integrated with the shape of the car, fast acting at speeds up to the better part of 60 km/h, and able to store wholly into its own compartment, no need to adjust the cargo. It’s a refined roof: nearly silent in operation, no slamming or jolting, and smooth throughout its entire range of motion. BMW wants you topless as often as possible in this car.

Drivers can select the eDrive mode, which sees the i8 run solely on stored electricity. Here, a fully charged battery is good for around 45 kilometres of driving up to highway speeds and beyond. In eDrive, the i8 is zippy, but not fully powered. Instrumentation suggests that you have access to about half of its available performance.

Best case scenario? If you keep the battery topped off with frequent charging and use eDrive mode exclusively, you basically never use fuel.

BMW i8 available on autoTRADER.ca 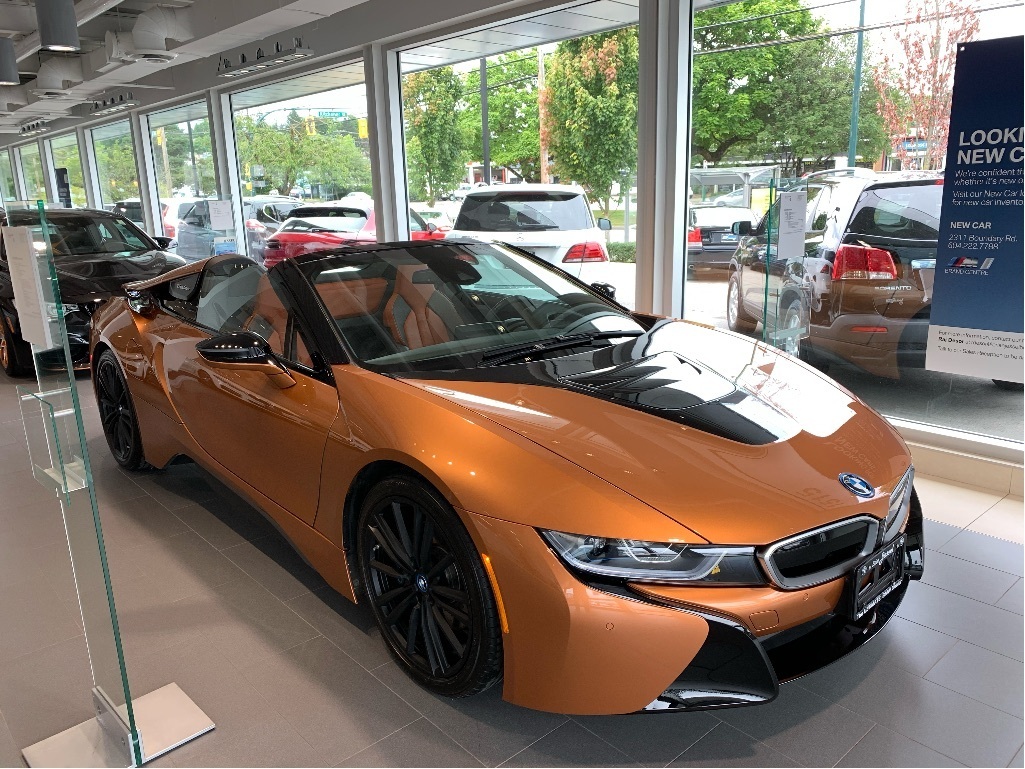 The standard drive mode sees the i8 propelled by a constantly morphing blend of gas and electricity, just like a regular plug-in hybrid. Here, you’ve got a cruising range of hundreds of kilometres since you’re using gasoline, just not very much of it. You’ve got full performance on tap, and frequent moments of fully electric (or electrically supplemented) driving to minimize fuel use.

Sport mode gets the little gas engine riled up for maximum performance, the battery-powered motor engaging as a power boost when needed. In Sport mode, the i8’s instruments turn red, the (synthetic) engine sound is increased, and the electric motors act like performance boosters, rather than the primary means of propelling the i8 along.

The combined efforts of both systems put 369 horsepower at your disposal, alongside even more torque. The i8 is all-wheel drive (AWD) and capable of 0–60 in around 4 seconds. That’s quick, though far from the supercar territory suggested by the looks.

And all said, at the tap of a button, you can switch from full electric, gas-free motoring, to hybrid motoring, to all-out electric performance motoring on the fly. And there’s little detectable sensation of the constant blending and mixing and switching of power sources from the driver’s seat: press the throttle, and the i8 leaps ahead – no squirming or jolting through the driveline. It’s smoother than many conventional gas-powered sports cars, quicker than some, and considerably better on fuel than most.

Steering heavies up gorgeously in Sport mode, helping lock the i8 onto the line you like with creamy precision. Gears shift instantly, and with no lash detectable through the driveline. That’s accented by perfect rev-matching in both directions.

Though handling limits are much higher than anyone needs on a public road, it can be easier than expected to ask too much of the relatively narrow tires. It’s massively pleasing to drive with intent, though it begins to run out of grip earlier than the most enthusiastic drivers will like. Don’t go trying to chase any Corvette Z06’s up an on-ramp.

Engineers worked overtime on the brake pedal feel: unlike most hybrids, they feel like a braking system, not an inconveniently watery lasagna with a brake pedal sticking out of it. They’re powerful and stop the car with consistent urgency when required.

The sound? Full-throttle operation is met with a mellow and meaty hum – like a small, all-motor V8. If you’re coming into the i8 out of an older, V8-powered M3, the soundtrack is fairly familiar. This is synthetic. All generated via a subwoofer speaker in the rear bumper that intends to make the i8 sound better than a three-cylinder engine and silent electric motor. Though fake and blasphemous, the synthetic sound is pleasing, and expertly matched to every change in throttle inputs. Probably, if you didn’t know it was synthetic, you’d never know it was synthetic.

Mostly, it’s easy to live with all of this futuristic, electrified performance. The i8 isn’t slammed to the ground, and bottoming out is rarely a concern. The ride is similar to that of a sports sedan – not spine-bashing, largely comfortable, and absolutely road-trip ready. Noise levels are kept nicely in check too. Further, though it’s a two-seat cabin, it’s sufficiently roomy for two average adults once they’re (finally) on board and seated.

But there’s the getting in out, which is the biggest thing about living with the i8. The door opening is incompatible with the shape of a human body: try and get in the usual way, and you’ll take the edge of the A-pillar to the temple. Go head-first, and you’ll have to lie on the centre console. Easiest? Use the door sill as a bum slide, then swing your legs in. It’s not easy or graceful, but you’ll get used to it. Getting out is less complicated, but it does feel like you’re being born again.

Pack light for your travels: i8’s cargo space is big enough for two bags of groceries, or a small camera bag. I’m not sure it could pack a standard two-four. Additional storage for smaller items is available behind the seats; they’re fantastic seats, more comfortable than grippy, and surrounded by a cabin with many familiar BMW design elements all deployed, trimmed and assembled with curvaceousness and attention to detail that fully support the price tag.

Said price tag, by the way, sees this well-mannered, supercar-looking plug-in clock in at an as-tested $177,000 – sufficient to open many doors on even faster, grippier and more extreme performance machines. If you just want the speed, a Mustang GT would leave the i8 trailing in a quarter-mile race by all accounts – and you could have four of them for the same money.

Of course, there are many reasons people spend this sort of money on a car, and performance is only one of them. If you want an easy-driving exotic that causes a supercar-level scene without burning fuel like an orbit-bound rocket thruster, the i8 Roadster is money well spent.