Historically, Honda has always managed to whiff at bat when it comes to hybrids: The original Insight of 2000 was a peculiar-looking and impractical two-seater that lasted only six years. The second-generation Insight, which debuted in 2010, was more practical but thoroughly appliance-like, and after receiving little love it was gone in four years. The CR-Z, Honda’s attempt at making a sporty hybrid coupe complete with available manual transmission, was interesting but mostly ignored during its six-year run from 2010 to 2016. And the Civic Hybrid? Well, who even remembers that it was ever available?

First and foremost a stylish, practical, and well-featured compact sedan, with effortlessly excellent fuel economy coming as a welcome bonus, the icing on the cake.

All this has left Toyota to dominate the hybrid landscape with its Prius lineup, but that may change with the introduction of the 2019 Honda Insight. In what appears to be an acknowledgement that hybrid sales can’t rely on fuel savings and green sentiments alone, Honda has developed the third-generation Insight to be first and foremost a stylish, practical, and well-featured compact sedan, with effortlessly excellent fuel economy coming as a welcome bonus, the icing on the cake.

While the second-generation Insight was based on the Honda Fit, this third-generation version shares its underpinnings and basic structure with the Civic. It’s styled more conservatively however, looking for all the world like a scaled-down Accord, which is a very good thing.

Honda could have called the resulting vehicle the Civic Hybrid, but the company has apparently learned from the near-invisibility of the previous Civic Hybrid and has instead chosen to differentiate the Insight properly. Again it’s a good choice, building on the Insight history to establish a bit of a hybrid nameplate, no matter how slightly peculiar the earlier versions were.

While Toyota’s Prius never lets you forget it’s a hybrid (it’s exterior styling fairly screams the word, and even the most luxurious trim comes up a bit short inside with leatherette upholstery and a deliberately odd layout), Honda’s Insight is refreshingly normal and can be fitted out in proper luxury. 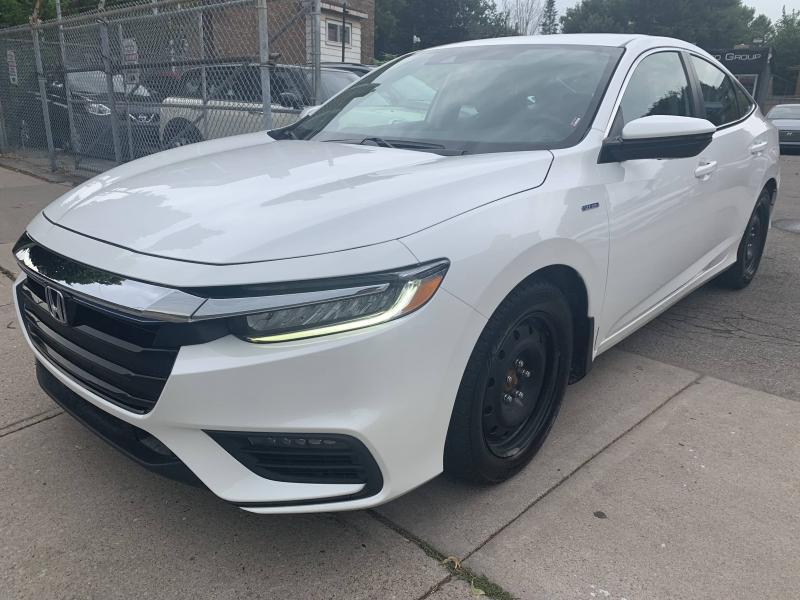 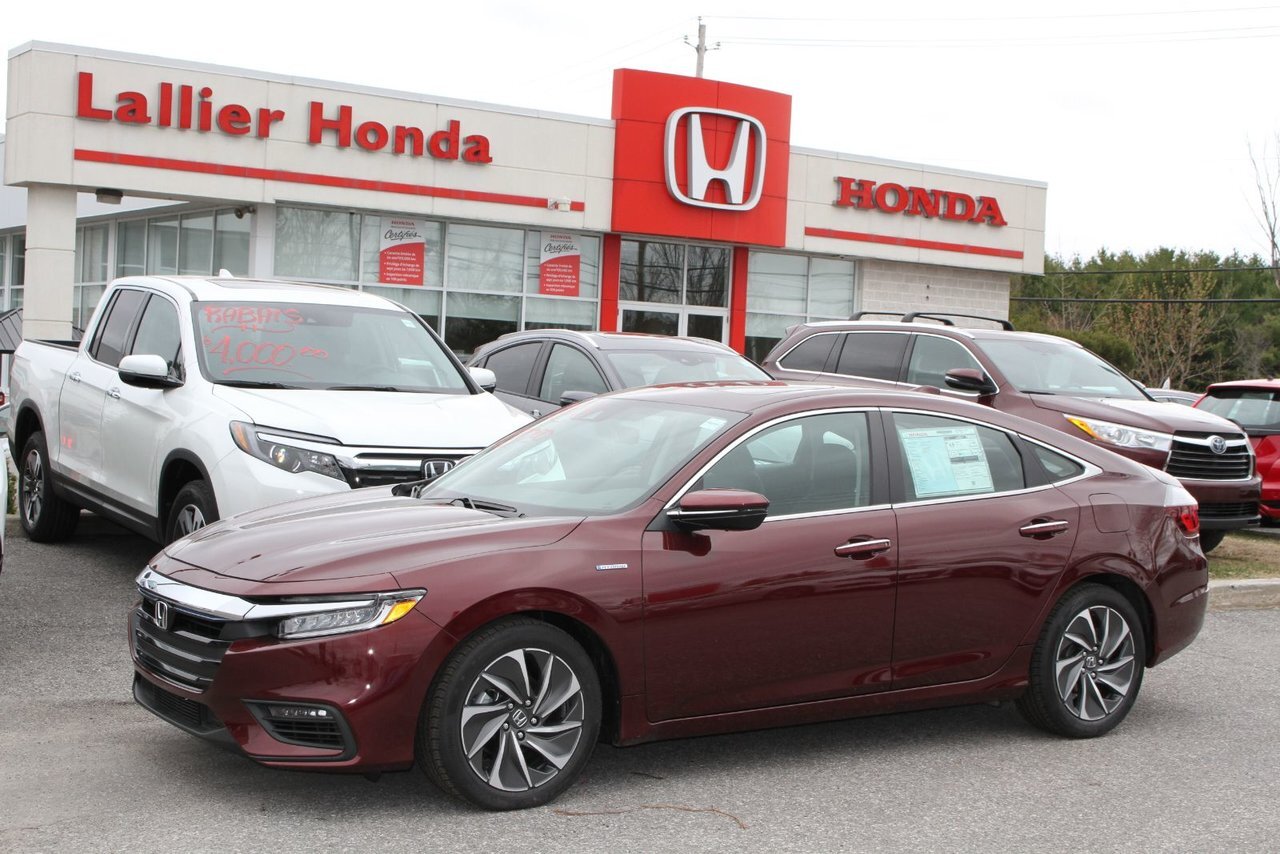 The drivetrain for the Insight is a third-generation development of Honda’s two-motor hybrid powertrain. It’s similar to that used in the 2018 Honda Accord, and markedly different from the previous Insight’s integrated motor assist system. It differs from Toyota’s Prius in that it doesn’t have a planetary gearset (so no CVT transmission), instead driving the car using only the electric motor at low speeds (which doesn’t require a transmission) and connecting the 1.5L Atkinson-cycle gasoline engine as needed at medium and higher speeds using a fixed ratio and direct lock-up clutch (so again, no transmission). The gasoline engine can also drive a generator to help power the electric motor or recharge the lithium-ion motive battery.

The advantages of the system includes its simplicity and low frictional losses. During my week with the car, the only real disadvantage I could see is that it means the gasoline engine feels more out-of-sync from current power demands than other hybrids, sometimes revving up high when the powertrain is only moderately loaded, and at other times muttering away quietly when the powertrain is working quite hard. I found this messed up my audible speed cues on the highway, which made the standard adaptive cruise control system especially welcome (it’s especially effective too, thanks to the hybrid drivetrain’s regenerative braking capabilities). When accelerating hard or tackling hills at highway speeds, the engine note could also become a bit loud and buzzy, despite the car’s ample sound proofing and active noise cancellation.

When driven casually around town, the hybrid drivetrain is a delight, operating quietly and seamlessly to provide lively off-the-line acceleration (thanks to the electric motor’s 197 lb-ft of instantly-available torque) while merely sipping fuel. The regenerative brakes are outstandingly linear and easy to modulate, with a firm pedal and seamless transition between regenerative and friction braking.

Official fuel consumption ratings for the Insight are 4.6/5.3 L/100 km city/highway, and when sticking to highways with a 100 km/h limit, I easily matched these numbers without consciously modifying my usual lead-footed driving style (mind you, the Insight does subtly encourage efficient driving habits). On Vancouver Island’s inland highway (which has a 120 km/h limit and plentiful hills) my fuel consumption crept up to 5.7 L/100 km, but then on my final day of city driving I managed to clock in at a mere 3.2 L/100km. Yes, that’s three-point-two litres per 100 km!

Eager, if not exactly sporty

Being based on the Civic, the Insight has a well-sorted suspension, good ergonomics, and comfortable seating (though rear-seat headroom is a little tight). The interior shares its fundamental layout with the Civic, but it has a different centre console and a slightly softer overall look, with generous use of stitched leather surfacing. The trunk is decently big at 416 L, and the rear seatbacks fold down in a 60/40 configuration.

The suspension feels a mite softer than the Civic (personally I think the Insight could do with a bit more rebound damping), but the car feels planted and composed, with nice dynamics, accurate steering, and good grip.

Driving modes include Normal, EV mode (which runs the car on electric-only until the battery is depleted) and Sport mode. This prioritizes sharper torque delivery, allows you to increase or decrease the regenerative braking effect using paddle shifters (sort of akin to downshifting and upshifting), and attempts to play a sporty exhaust soundtrack over the powertrain’s somewhat disconnected-sounding machinations. But while the Sport mode gets an “A “for effort, it’s more amusing than convincing, like a grade-schooler dressing up as a pirate for Halloween: “Arrr, mateys, I’m a Civic Si!”

Still, on the twisty roads that serve northern Vancouver Island’s small communities I appreciated the Insight’s eagerness to please, and found that while Sport mode might not turn the Insight into a Bugatti Chiron, it did make it into a reasonably enjoyable driving partner. On straight highways there’s enough reserve power for safe passing (the Insight posts 0–100 km/h times somewhere between 7.9 and 9.0 seconds depending on the state of battery charge), and knowing you’re doing it all while using less than 6.0 L/100 km makes it all the more pleasurable.

I found very little not to like about the 2019 Insight. The occasionally droning character of the engine is really the biggest criticism you can lay on it, but that’s offset by the car’s superb efficiency.

I did find that the driver assistance features could be a little intrusive: the forward collision warning tends to sound the alarm during what I consider to be fairly normal city driving situations, the lane-departure warning does the same thing on curving or poorly marked roads, and the lane-keeping assist system can make it feel like the car is tram-lining even when you’re staying squarely within the centre of your lane. The traffic sign recognition system is an excellent and much-appreciated feature, but it can’t seem to recognize BC’s 120 km/h speed limit signs, variously showing them as 100 km/h, 40 km/h or (most often) 20 km/h. Still, these are but minor quibbles regarding an otherwise excellent package.

With the 2019 Insight, Honda appears to have really connected with the hybrid segment. The car is easy to live with, exceptionally efficient and, in my test car’s Touring trim, extremely well featured. With pricing only a few thousand dollars over an equivalent Civic, and a slightly more upscale look and feel, it’s a compelling choice even before factoring in the potential fuel savings you can realize.

About Simon Hill
Simon Hill rebuilt his first engine, an air-cooled Volkswagen, at 14. He started writing professionally about cars in 2009 and was also the editor of Boat Journal magazine. He lives in Vancouver, BC.
You may also like
8.0