MARYSVILLE, OH – Talk about going from one extreme to the other. We’d just finished a brisk track session with the NSX, and were now heading out for an hour’s drive in the brand-new 2019 Acura ILX. While they may be polar opposites – the NSX is the halo car of the brand, the ILX its entry-level gateway – they’re equally important to Acura’s portfolio. The ILX represents attainable luxury, what automakers call a “conquest vehicle”, luring buyers in with relatively affordable pricing in the first step towards brand loyalty.

The overhaul is skin-deep, however – aside from the new front and rear fasciae and new A-Spec appearance package, the ILX still rides on the previous-generation Civic platform.

Introduced in 2015, the ILX is a decent little quasi-luxurious daily driver, but hard-pressed to hold its own against cars like the Audi A3 and Mercedes-Benz compact sedans – or even from within, as the new Honda Civic Touring quickly became one of its biggest competitors.

Refreshed for 2019, the ILX is the last of the Acura lineup to receive the new familial “diamond pentagon” grille. It’s a look that’s far more befitting of a luxury brand than the previous “beak” which was not only puzzling in appearance, but when worn fore and aft made it difficult to tell whether the cars were coming or going. Framing the grille are new swept-back seven-element jewel LED headlights, and a more sculpted hood. The rear end is treated to a sportier deck lid with spoiler, LED taillights, and racing-style diffuser with chrome-finished exhaust.

The overhaul is skin-deep, however – aside from the new front and rear fasciae and new A-Spec appearance package, the ILX still rides on the previous-generation Civic platform. And since the latest Civic has since received accolades for its ride, handling, and new turbocharged engines, it’s a tough sell convincing buyers to opt for the ILX, whose prices begin ($29,900) where the most loaded Civics ($30,076) leave off.

Apple CarPlay and Android Auto are now standard on every trim except the base, and the sporty A-Spec appearance package has made its way down from Acura’s more premium models as a new option for 2019. It features “shark grey” 18-inch alloy wheels, piano black decklid spoiler, A-spec badgesb, LED fog lights, red leather interior with ultra suede seat inserts, and aluminum sport pedals.

The only cars available for testing were the $35,900 Acura ILX Tech A-Spec. The range-topping model combines the fully loaded Premium with the A-Spec appearance package, then throws in navigation, a 10-speaker audio system, and a multi-view rear camera with guidelines. 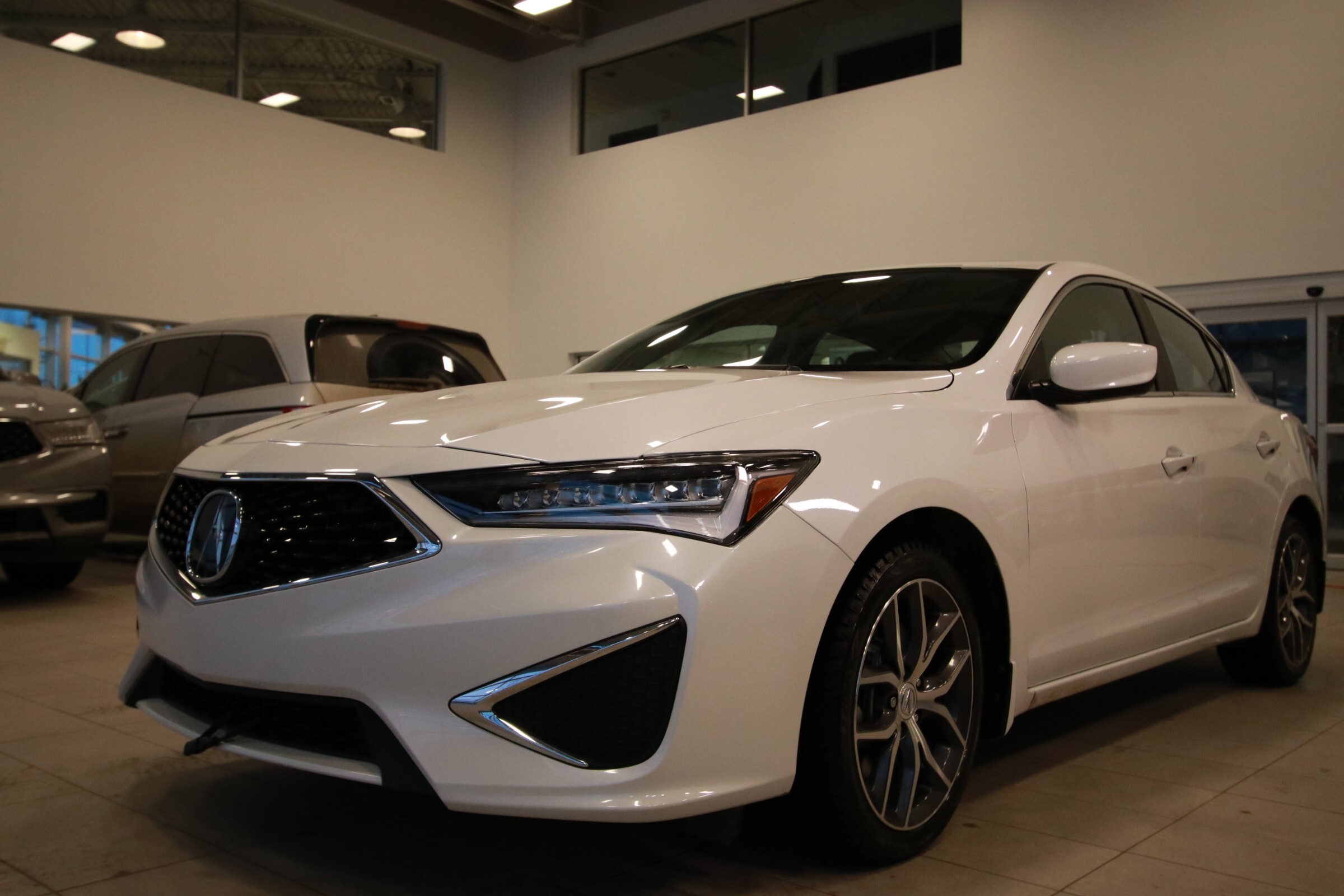 It’s attractive and sleek, but the bright red interior doesn’t come close to the craftsmanship of its German competitors. The updated dual-screen connectivity system now uses software that Acura claims is 30 percent faster than before.

The seats are comfortable, but the cabin just doesn’t project that sense of quiet hush typical of premium brands like Audi, BMW, or Mercedes. Back in 2016, the ILX’s engineers added acoustic glass, more sound dampening insulation, and an active noise-cancellation system to combat wind, road, and engine noise; but there was still some audible tire noise from the A-Spec’s larger, wider tires.

There’s plenty of leg- and headroom up front, though the rear seats are somewhat cramped. Overall, it’s a nice little car, but just doesn’t feel special.

The powertrain remains the same 2.4-litre, naturally aspirated four-cylinder that produces 201 horsepower at 6,800 rpm and 180 lb-ft of torque at 3,600 rpm. There’s only one transmission: an eight-speed dual-clutch automatic that routes power through the front wheels. Competitors Mercedes A-Class and Audi A3 both come with turbo-charged fours, albeit with slightly less power. The Civic gives you four engine choices, including a pair of turbocharged units.

The eight-speed dual-clutch automatic however, is a really nice piece of equipment. Most DCTs display a jerky hesitation when first moving off thanks to their slow-engaging clutches. The ILX’s dual-clutch is unusual in that it uses a torque converter to relay the power to the gearbox and the result is smooth, instant efficiency.

Our route took us through some pastoral Ohio countryside, with rolling hills, picture-book pretty farmland, and small villages made up of tidy, clapboard houses. There were enough tight curvy sections, and some surprising dips and bends in the smooth-paved rural roads to find joy behind the wheel of a tight-handling car. The ILX acquitted itself with all the dull efficiency of a bookkeeper.

The leather-wrapped wheel feels good in the hands, steering is light and predictable. There are paddle shifters located either side of the wheel, and knocking the shift lever into Sport mode lets you row through the gears on your own, while adding some surprising snarl and pep to the drivetrain’s response. The DCT is so smooth and efficient that most drivers probably won’t bother.

The biggest downfall for the ILX, aside from its aging Civic chassis, is that there’s no available AWD option as there is with the Audi A3, Mercedes-Benz CLA 250, or BMW 2 Series. Earlier, we’d driven the Acura TLX on a slippery wet skidpad, and flogged the RDX and MDX on a gravel road course, and found them delightfully responsive – the SH-AWD system bringing the rear end back in line to correct any oversteer, the handling surprisingly crisp in the crossovers. The ILX is predictable and pleasant, but handles corners with a hint of safe understeer so there’s very little thrill derived when driving it quickly.

It’s hard to compare the ILX to its more sophisticated German competitors, especially with its dated chassis. But even the top-spec, fully loaded ILX is only $1,000 cheaper than the $34,000 entry-level Audi A3 while the comparably equipped Audi Technik starts at $45,300. On the other hand, the loaded Civic Touring features excellent handling, more trunk room, and just as many features for $30,076. Still, those who simply must drive a luxury brand can get Honda reliability, generous standard features, and a long list of safety technology in the ILX at a genuinely reasonable price.

The 2019 Acura ILX arrives in Canadian dealerships on November 9.