Under a bootful of throttle and maximum revs, programming of the 2018 Chevrolet Camaro SS’s small-block V8 engine sees it cut out for a split-second as the eight-speed automatic swaps up into the next gear.

The soundtrack is pure NASCAR – and nearly as loud.

There’s a brief pause. A miniscule break in the throbbing V8 roar as the next cog swaps into action. For that split second, the engine isn’t firing. It’s noiseless, albeit briefly, resulting in a stark break in the sound effects drenching the cabin. The little cut in engine power enables more accentuated, faster, and smoother upshifts. It also sounds pretty badass.

This is GM’s way of saying that they care – and one of numerous ways that the Camaro SS is tuned for maximal strutting of its stuff when it’s driven very hard.

Said engine is a 6.2-litre V8, with horsepower and torque pegged at an even 455. Direct injection, cylinder deactivation and variable valve timing are modern touches – but at its core, this one’s old-school: with two valves per cylinder and a single camshaft in the block.

The sound is sensational. Exhaling through a flap-controlled sports exhaust kit, noise is deployed in real time against the selected drive mode and throttle position.

On one hand, you can drive the Camaro SS with a light foot, cruise at silly-low revs, get highly reasonable mileage, barely hear a peep from the engine room, and saunter through traffic never feeling the eight-speed transmission shift.

On the other hand, you can stuff your sneaker to the firewall and be rocketed ahead with such thrust that the Eagle F1 tires scramble to put it all down for most of first and second gear on anything less than a clean, warm road.

Here, the soundtrack is pure NASCAR – and nearly as loud. The SS chugs pavement back at a frightening rate, pinning all on-board torsos firmly to their seatbacks as the glorious sound of a big, all-motor V8 rips through the atmosphere in its wake. As redline approaches, you can literally hear the pulsations from the exhaust ripping the air to shreds behind the car. Yahoo!

Notably, the engine delivers a nearly unexpected level of high-RPM pull. This big V8 really breathes and is thrilled to visit its redline as often as you’d like. Careful though: it’s fast. Max out third gear and you’re in demerit-point territory, with five gears left to go.

I’ll get salty comments for saying this, but the automatic transmission is really good. Paddle shifters add more control over the experience, but left to its own devices, the unit always knows what to do, and when to do it. It shifts early and invisibly during light use, and with pleasing precision when worked hard.

You can get a six-speed manual if you like. It’s slower and uses more fuel and I’d still buy my Camaro SS with it, and maybe you would too. Still, for all but the die-hards, going the automatic route takes little away from the experience.

It’s a pleasing powertrain, to be sure. And, just tap a button to toggle between Tour, Sport, and Track modes, and the Camaro SS is as aggressive or subdued as you’d like.

The suspension and steering are equally as lovely in the grubby mitts of the driving enthusiast.

My tester got the Magnetic Ride Control suspension, and so should you. In other applications, it ensures a compromise-free blend of comfort and handling. In higher-performing cars like my tester, the focus is on handling, and the slick suspension is able to absolutely neutralize and mitigate unwanted body motions the instant they begin to manifest.

Hit a bump, dip, whump, pothole, train-track crossing, whatever. The response from the magnetically-suspended Camaro is consistent, with the body moving just twice: up, down, stop. That’s it.

The body returns quickly to stability over its wheels, there’s minimal jouncing about of those on board, and the sort of bumps and dips that cause drivers to brace for a ride result in a little squirm from beneath the vehicle, and little else. You rarely feel like you’re being shaken and tossed like a Dole salad kit. The car settles back on its wheels far more quickly, and the usual drama of hitting a bump or dip in a performance car is all but non-existent. To me, this technology is a must-have: you feel the benefits on every drive, and Magnetic Ride Control might be the most valuable item in the Camaro SS’s performance toolkit. 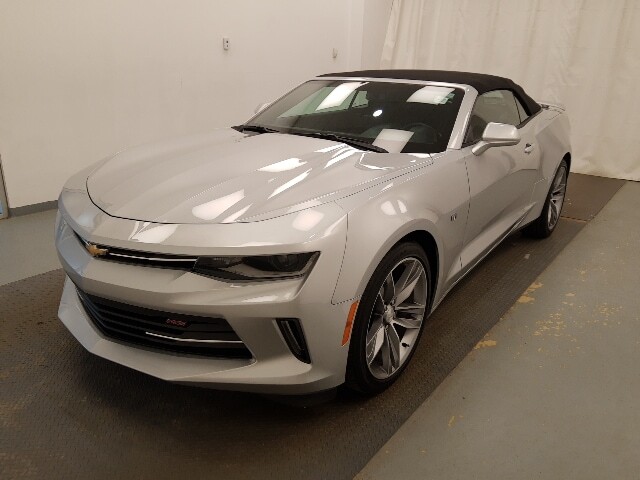 The steering is just as easily appreciated. In Tour mode, it’s lighter and lazier, but still quick enough to remind drivers that they’re at the helm of something intended for serious motoring. From centre, the wheel requires a few degrees of input before it begins to tighten and heavy up. The result is a carefully calibrated numbness on centre, which reduces the twitchy, busy feel typical in many performance car steering systems during cruising. The need to constantly re-adjust the car’s position in its lane is largely nuked.

Enter Sport or Track mode, and the numb zone vaporizes. The steering feels quicker, heavier, and more precise and willing. The feel is among the best I’ve ever experienced near this price: weight balanced nicely of effort and ratio, highly precise, and so receptive that just tightening the muscles in one side of your hand or the other, effects a variation in direction. Used thusly, Camaro SS stirs up a great big grin as you direct this big mass of steel and rubber and plastic, at high speed, with only little, minuscule inputs.

Get too saucy in a corner, and correcting a small skid is as easy as lightly easing your grip on the wheel. There’s no thrashing, and no Hollywood-car-chase-level sawing at the steering. It’s all a little more meticulous and precise than you might expect. When you get the Camaro SS cooking (like really cooking) in some bends, it demonstrates the grip, balance, and careful calibration that I typically expect in performance coupes with much higher price tags.

As big Brembos tend to, the massive brakes lack a bit of precision at the pedal until you’re deep into it: they feel the most precise and willing when they’re hot and working hard. Here, the stopping power is consistent and fierce and nicely matched to the rest of the capabilities. As it is elsewhere with the Camaro, the braking system flaunts its best stuff when worked aggressively.

And so, as a performance car designed to put on a show via sounds, sights, sensations, and demonstrated precision and fine-tuning around how it feels and responds at the tips of your fingers, my tester more than satisfied.

Other notes? The Bose stereo is rich and satisfying, and the headlight performance is easy to appreciate on after-dark drives thanks to a good thick spread of clean, white light.

But the Camaro is not flawless.

The biggest issue, by my estimation, is the driving position and cabin. Getting seated requires opening the mile-long door and plopping way down. It’s like stepping into a hole: you sit just above the Camaro’s floor, deep, deep inside. At 5'11", the window belt-line sat above my collarbone. The top of the instrument cluster cowl sat at chin height. The thin windows close the cabin up visually – it’s roomy enough but will feel dark and cramped.

I drive a Dodge Viper, which is one of the most poor-visibility cars I’ve ever driven, and this Camaro is in the same ballpark. Further, that instrument cowl hump mentioned earlier serves no functional purpose, other than to block even more of the forward scenery.

Some will wish for more awareness of their surroundings, meaning perfect mirror placement is key. Blind spot monitoring was included, but I still felt the need to launch an investigation every time I wanted to change lanes. Finally, unable to see most of the Camaro’s hood, I found myself frequently trying to lift my seat up, even by just an inch, though this ate up any remaining headroom.

In summation: you may need to get used to the Camaro’s driving position, and the way the cabin surrounds you. Don’t worry too much though – this is one of Canada’s best-selling sports cars, and many shoppers apparently have no problem with this stuff.

If you’re coming to a new Camaro out of an earlier generation, you’ll find the cabin here to be a nice upgrade. It’s still dark and simple in comparison to many competitors, but the instrumentation is massively improved, as is the central command system, and the console-mounted gauges have, blessedly, been moved into the cluster, where they’re displayed digitally, and actually visible.

Materials have been upgraded in key areas, there’s more sculpting and detail, and a full array of LED light-piping is proudly displayed to help set the cabin off after dark. Don’t miss the world’s thinnest climate controls, or the temperature selector cleverly integrated with the vent trim ring.

Still, I could have done with some more at-hand storage. There was little room to keep my things: beyond the two cupholders, I had a clumsy centre console that’s too shallow, two door pockets that are small and oddly shaped, and no console storage bin up near the shifter where usually, there is one. The only great resting place for my smartphone was on a built-in wireless charging pad: great stuff, except that its in the rear seat, and isn’t big enough to fit my Samsung S7, anyways.

Sometimes, there’s a price to be paid for this much fun. In the case of my tester, that price is dealing with a fairly compromised interior, and about 61,000 Canadian loons.

About Justin Pritchard
Justin Pritchard is an automotive journalist, consultant, TV presenter, and photographer based in Sudbury, Ontario.
Follow me
You may also like
7.6