If you’re shopping for a full-size pick-up truck and have visited the Ram Canada website recently, you might be surprised to see two different Ram 1500s front and centre at the same time.

It’s not unusual for automakers to have two different model years available at once, even through the launch of a new generation – as is the case with the Ram 1500 as it transitions to its fifth for 2019 – but it is outside the norm to have both models featured side-by-side so prominently. This is happening in large part because of some major production delays with the 2019 version that have put deliveries behind schedule.

If you want a freshly redesigned truck with some intriguing innovation, the 2019 could be worth waiting for – but if what you really need is a new truck in your driveway as soon as possible, you might be wondering whether the 2018 version will do the job.

Here’s a side-by-side look at the two model years that can help you decide which one might be the right buy for you.

On first impression, the 2019’s more curvaceous grille and up-tilted headlamps give it a much more aggressive look – the front end on the 2018 looks a bit droopy and demure in comparison.

That’s really only window dressing, though. The 2019 Ram is being touted for its new active grille shutters, which along with the updated design contribute to a drag coefficient of 0.357, the lowest in the segment. Do these things make that much of a difference? Well, the 2018’s coefficient of drag is 0.36, which was already the lowest for a full-size pick-up. That minor difference isn’t going to functionally add up to much.

The 2019 does have a broader selection of headlamps, though, including available LED adaptive front lighting that follows the steering to shine into turns, which might be a selling point for rural owners who frequently drive at night.

A comparison of the side view reveals some nice subtleties on the 2019 like light sculpting on the door panels and chrome trim around the windows (a test drive earlier this summer revealed some fit and finish issues with those). But it’s the parts under the skin that make a difference here: the frame on the 2019 is built with 98 percent high-strength steel, which helps it drop almost 225 pounds relative to last year’s model and gives it better handling and a higher payload (the maximum is up 420 pounds to 2,300 lb) and trailering capacity (up 2,130 pounds to 12,750 lb) to boot. Now we’re talking.

For those with a healthy budget who consider ride quality a priority, the 2019 Ram 1500 has a next-generation air suspension with frequency-damping control shocks, capable of automatic load levelling and available on all four wheels.

This is also the view where we can count the number of doors, which brings an interesting factor into play: the new Ram doesn’t come in a single-cab layout at all, so if that’s important to you then the 2018 is the one you want to look at – particularly from an affordability standpoint because it creates a $6,500 difference in starting price if the number of seats truly doesn’t matter to you.

The new Ram’s wheelbase is up to 4 inches longer, but all of that room has gone into the cab, so the bed lengths on offer are unchanged. However, on the 2019 the bed rails are 1.5 inches higher and the rear bumper has been reshaped to give it a larger and lower step-in footprint. More significant, perhaps, is the move from a mechanical to an electronic locking mechanism on the tailgate, which allows it to be dropped via an interior switch, and locked or unlocked remotely with the key fob. 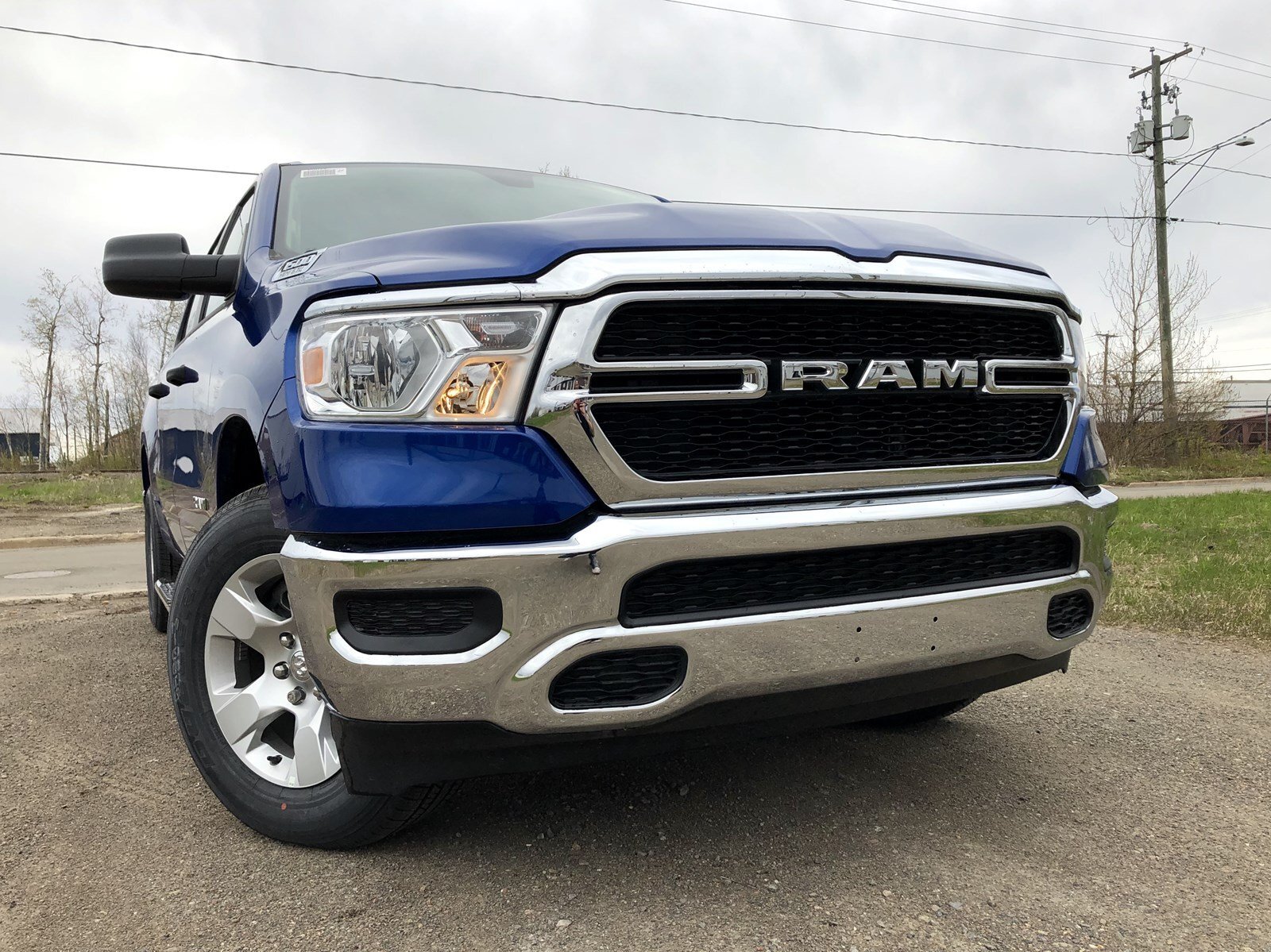 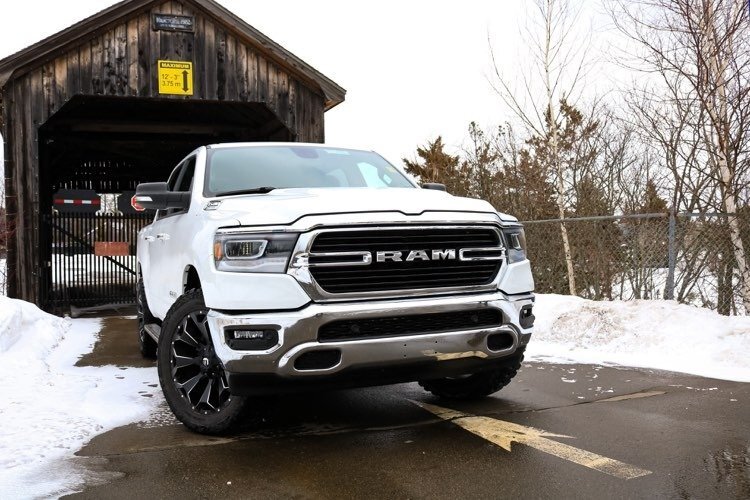 By far the biggest difference in the 2019’s interior is the newly available 12-inch touchscreen Uconnect infotainment system. It’s big and bright and user-friendly and can do cool things like put Apple CarPlay or Android Auto on a split-screen layout with radio or climate controls accessible underneath. But it’s also a $1,000 option that doesn’t start to become available until you’re already spending north of $50,000 for the Laramie trim at minimum, which pushes it into luxury territory. The standard 8.4-inch screen isn’t functionally all that different from what was in the 2018 in Sport models and higher, including smartphone app compatibility, so if that’s what you’re ending up with in the 2019 as well then you’re no further ahead.

The extra cab room of up to 4 inches could be a bigger draw to the 2019, as that added space really can make a difference as either a work truck or a family hauler.

All trims for 2019 come with push-button start, an electronic parking brake, and a redesigned rotary shifting dial, the latter two being features that aren’t universally loved and therefore could be worth taking into account.

The two FCA mainstay engines on offer here, the 3.6-litre Pentastar V6 and the 5.7-litre Hemi V8, are the same in both generations. However, the 2019 version gets the addition of mild hybrid technology called eTorque, which aids the engine’s stop–start function and delivers extra torque at low revs through the use of recovered brake energy.

In the Hemi, the 395 hp and 410 lb-ft of torque at 3,950 rpm get as much as a 130 lb-ft lift in certain situations. Unlike with the V6, though, eTorque isn’t standard with the V8. Along with other fuel-saving technologies like variable valve timing and cylinder deactivation (which aren’t new) and deceleration fuel shut-off (which isn’t new but works from third gear and higher on the 2019 truck), the latest Ram 1500 V8 with eTorque and four-wheel drive clocks in at an NRCan-rated combined fuel economy of 12.9 L/100 km. The 2018 4x4 with the Hemi and the eight-speed transmission – the new generation of which is standard on the 2019 – rates at 14.0 L/100 km.

But what does this actually add up to?

Purely on a cost-savings basis, waiting longer and paying more for a truck with this technology doesn’t necessarily make a lot of sense. If your motivations are related to environmental concerns or driving enjoyment – that start-up torque really does have a nice feel to it – then that’s a different story for which only you can draw a conclusion.

How Long Will I Have a Choice?

As mentioned, both the previous and new generations of Ram 1500 are on sale concurrently, the former sometimes referred to as the Ram Classic. FCA intends to keep both versions on the market until the 2019 version hits 100 percent production capacity. By all accounts – including the fact that the 2019 with the Pentastar hasn’t launched yet – full capacity is still a few months off, so expect to have both of these options available at least into 2019.