Nothing else in the automotive realm has quite the reputation for indestructible durability as Toyota’s trucks.

In the most inhospitable places on the planet (geographically or politically), you’ll find Toyota trucks, dutifully going about their business. Whether jungle or dustbowl, disaster relief or war-torn protection service, Toyota’s rugged beasts are deployed to do what most other machines simply can’t be trusted to survive.

I’ve personally seen Land Cruisers – some very ancient and woefully neglected ones – relied upon by the fortunate few who own them in remote parts of Africa and Asia to drive through deserts and jungles without much maintenance. I’ve seen fleets of newer Land Cruisers bought specifically for service deep in Canada’s northern gold mines, where their efficiency and durability a few kilometres into the bowels of the earth make them worth the tremendous importation costs.

That reputation has served owners well fiscally too, where Toyota’s Tacoma regularly earns the top spot for resale value retention.

With a truck-building history as long and successful as Toyota’s, it’s understandable why change happens at roughly the same pace as continental drift. Don’t mess with success, and make sure that every change is very carefully considered and tested for impossible tolerances.

For 2019, Toyota’s body-on-frame trucks – the Tacoma mid-size pick-up, Tundra full-sizer, and 4Runner SUV – are bolstered by some subtle updates to their most rugged TRD Pro lineup. Toyota invited a small contingent of Canadian automotive media to the ruggedly beautiful French River region in Northern Ontario to experience the trucks both on-road and off.

Here are the highlights from driving each machine, as well as what’s new for the TRD Pro packages for each of the respective models as we head into 2019.

For those who lament the passing of the FJ Cruiser as Toyota’s throw-back to the classic FJ Land Cruisers of days gone by, plus Japan’s best answer to Jeep’s Wrangler, the 4Runner is as close as we now get on North American shores. This year, it gets a little closer thanks to the new TRD Pro line-exclusive Voodoo Blue paint. It’s the same hue offered years ago on the FJ Cruiser, and like the FJ, the 4Runner has a new basket-style roof-rack system that’s standard on this trim.

The 4Runner hasn’t seen a complete overhaul for nearly a decade. Its 4.0-litre V6 emits 270 hp and 278 lb-ft of torque. Hauling around 2,111 kg is no easy feat, made more challenging by the fact that the normally aspirated V6 needs revs to get going with any appreciable urgency, but never feels underpowered per se. It’ll haul 2,268 kg or 595 kg of payload in the back, both of which are sufficient for most drivers, and the soft throttle is a boon for off-road throttle modulation.

Bigger news for the 4Runner TRD Pro is the replacement of last year’s Bilstein shocks with the aluminum 2.5-inch Fox Internal Bypass shocks that first appeared on the Tacoma last year.

On-road, the 4Runner’s ride is luxuriously supple, with all but the nastiest potholed bumps being soaked up without much reverberation reaching the cabin. The 4Runner is not intended to be a corner-carver, and with the soft suspension and all-terrain tires, it isn’t.

But that also gives the TRD Pro some exceptional articulation for off-road crawling. Of the three trucks, it’s the 4Runner that would absolutely be my pick for serious off-road duties, whether trail-riding through the forest or rock-crawling. With a wheelbase (and overall length) a full metre shorter than the Tundra (and about a half-metre shorter than the Tacoma), it’s no surprise that the 4Runner has better break-over angles and can be wheeled around tighter spots more easily.

Plus, the SUV was fitted with the most aggressive off-road tires, a set of Nitto Terra Grapplers – although in driving each truck back-to-back over the same obstacles and surfaces, if they offered superior traction, it wasn’t abundantly evident. The TRD Pro package also adds a crawl mode feature and a locking rear differential.

The 4Runner’s interior shows off the machine’s obvious age. The leatherette seats are comfortable enough and provide electric adjustment, but the passenger space – particularly in the rear seat – isn’t as cavernous as one might expect from a vehicle this size. The TRD Pro trim eliminates the third-row seat and provides decent rear cargo space (up to 2,540 L with the seats folded).

The dashboard is covered in acres of hard, cheap-feeling plastic finished a wild variety of textures and faux metallic appearances. The controls are extremely simple and easy to manipulate with large rotary dials being the controller of choice throughout. There’s no automatic or dual-zone climate control, and the infotainment looks a few generations old now with a tiny, low-res screen. While the gear and 4WD shifters are located on the centre console, the operation of the other off-road functions is handled by buttons on the ceiling console – a placement that had several of us scratching our heads in wonder.

With Jeep having now updated the Wrangler to a higher-tech, more passenger-friendly off-road machine, the 4Runner remains the sole survivor from a past era of unapologetically rugged off-roaders that put adventure and durability above luxury. For those of us who love the 4Runner (and you can count me among them), that’s a good thing. This is an SUV that deserves to have “Utility” in its name. 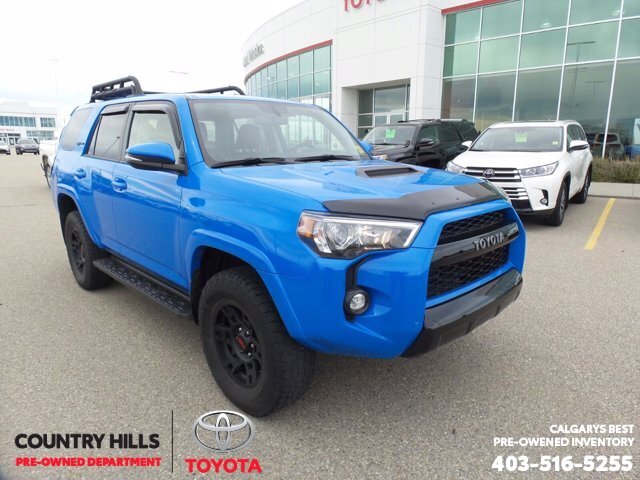 The “Taco”, as it’s affectionately known, has legions of die-hard fans who will immediately notice the biggest change to this year’s TRD Pro: a long, black protrusion rising up along the passenger-side A-pillar. It’s not a snorkel, as I mistakenly referred to it during the press-briefing; that would suggest some sort of aqua-fording improvement that this appendage does not permit. Instead, Toyota calls it the Desert Air Intake and its sole purpose is to help keep the Tacoma’s sinuses from being clogged up with dust when running through arid landscapes.

No matter, most buyers will appreciate the snork– er, Desert Air Intake for the perceived bravado it bestows upon the truck, making it appear even more off-road-ready.

There are three Tacomas that wear the TRD badge: a TRD Sport, TRD Off-road, and this, the TRD Pro. The Pro adds in the serious off-road kit, like the crawling feature that enables the driver to focus on steering while the truck manages its speed climbing, descending, or bounding over rough terrain. The crawl speed can be adjusted within a few km/h and works as promised. We tried it out climbing over a corduroy series of logs, as well as down a steep, 60-foot-high loose-dirt descent, and it made driving easy enough, but the cacophony of noises the system makes to battle between the throttle, ABS, and traction control systems was enough to make us switch the system off and return to doing the driving for ourselves.

We were told by the event organizers that the same steep decline was originally intended to be a climb feature for us, but the previous night’s deluge compromised the packed dirt enough (and made a soupy mess at the bottom), that it was proclaimed too difficult to do.

That, of course, meant a handful of us spent the next half hour using it as a hill-climb event just to prove the event staff wrong. After realizing that a slow-and-steady approach, trying to use all the technology available, wasn’t going to get the job done, one of my Quebec-based peers tried the considerably more-fun “when in doubt, power out” principle and the Tacoma became the first machine launched up the hill.

The Tacoma has the most contemporary interior of this truck trio. While it has more digital componentry (a push-button start – imagine!), the controls follow the Toyota hallmark of being easily manipulated, even with gloves on. Unlike the 4Runner, the four-wheel drive system is adjusted via a rotary dial, and while electronically actuated, it still requires a tedious song and dance of stopping, selecting neutral, and back into drive, just to go between 4-Low and 4-High. During a couple of instances, if the sequence wasn’t done just right, the Tacoma would refuse to do much of anything but sit there and make you ponder the folly of your ways. Other systems these days enable the shift on-the-fly (or at least on-the-crawl) and in fewer steps.

The 3.5L V6 under the Tacoma’s hood is more efficient than the older 4.0-litre in the 4Runner, but it’s also softer on torque and character, not sounding much like a truck engine (if that sort of thing matters to you). While it’s an adequate mill to motivate the Tacoma, it’s not very engaging, and it’s the newest engine of the mix here, so its longevity over the years has yet to be proven.

The Tacoma remains a good-looking, well-built machine, and that’s just what’s made it so appealing for buyers – whether off-road fans or not – for all these years.

During our impromptu hill-climb event, all three trucks made it up the hill. The most challenging truck to achieve this feat in was the Tundra, largely due to the decidedly non-aggressive Michelin LTX AT2 tires, and the sheer size of the blue beast. Lower chin clearance and longer rear overhang meant that the heavy Tundra also bogged in the loose dirt quicker too.

Still, with more than a hundred extra horses and over 400 lb-ft of torque, the Tundra drivers simply used sheer muscle to will the truck up the hill. And neither of the other two trucks sounded anywhere near as good as the big 5.7L V8 bellowing out of the twin, black-chrome tailpipes under a heavy throttle foot. That’s what a truck is supposed to sound like!

In the full-size segment, all the competitors have been completely re-done (see: GM and Ram) or significantly updated in recent years. The Tundra, however, soldiers on with evolutionary updates year over year. Despite being the old dog in the pack, the Tundra’s sales have risen an astonishing 25 percent in the past year.

It seems truck buyers like a relatively simple and dead-reliable machine for their truckin’ duties.

Like the other two TRD Pros, the Tundra’s interior is clean and artless, but completely functional. Despite being the most work-oriented of the three, the Tundra’s seats wear buttery soft, yet durable-looking leather that filled the cabin with the aroma of expensive hides.

The rear seat in our Crew Max truck was gargantuan, though a shorter Crew Cab version is also available.

On-road, it handles as well as a full-size pick-up should and is sufficiently quiet, but Toyota has clearly recognized it’s the truck that people are least likely to take seriously off-road, and hasn’t fitted the fidgety crawl control feature or locking rear differential. It was too big to take over some of the tighter obstacles on our test course, but managed itself well enough crawling over the moguls, logs, and rocks.

Still, after an absence from the market, the Tundra TRD Pro is back and gains the same 2.5-inch Fox bypass shocks and the TRD skid plate as the other trucks. The Tundra also gets a set of handsome 18-inch BBS forged wheels, too.

Ultimately the Tundra TRD Pro will serve its purpose as a well-equipped, durable rig with a bit of extra attitude and suspension capability, but despite its $64,000 MSRP coming perilously close to the Ford Raptor’s cost, it’s not a hardcore off-road machine.