The writing is on the wall– er, make that headstones, for these two mid-size sedans.

Ford has recently issued a death sentence to pretty well everything in their lineup that doesn’t have a pony badge or an SUV classification, and the Passat’s grave has already been dug by the swoopier (albeit pricier) Arteon sport sedan.

Last year the mid-size car segment saw a decline of 27 percent, with the bulk of that attributed by car stats site GoodCarBadCar.com to the Ford Fusion’s decline in sales. Ouch.

So why bother with the bandwidth to pit these two mouldy-oldies in a head-to-head test?

There are two good reasons, we think. The first is that around 100,000 Canadians are expected to buy a mid-size car this year, and although the biggest sales are going to newer players from the Asian brands, there are still a heck of a lot of Fusions and a few Passats moving off dealer lots.

What’s more, the manufacturers have heaped on extra helpings of value for these models, with Ford slathering the Fusion in particularly juicy discounts right now.

And as a refreshing bonus, these aren’t flabby crossover SUVs, which automatically makes them more endearing in our books.

Call us old-fashioned, but the proportions of a mid-size sedan possess an air of sophistication that’s absent from the SUV alternatives out there, kind of like the difference between being dressed “business casual” versus wearing the clothes you pick for doing yard work. And as the fresher designs from competitive brands have made their sedans all swoopy and adorned with slashes and gashes, the Fusion and Passat have aged rather gracefully.

Despite years of familiarity, the Ford still stands out thanks to its sporty visage that was clearly clipped from the Aston Martin catalogue. Its tail end hints of Jaguar influences, especially with the quad tailpipes sticking out as a distinct giveaway that this is the Sport trim.

When this generation of the Passat first emerged nearly eight years ago, it was notably larger than the model it replaced. Intended for North American cross-continental comfort, the Volkswagen has a taller profile with more glass area than the Ford. It’s not as sleek, yet there’s a simplicity to the design that has meant the Passat hasn’t really grown out of any trendy styling gimmicks because it’s not got any.

That said, being the new GT trim, VW has painted some bright red lipstick on the grille and given it a set of handsome 19-inch wheels, and a dealer-added trunk lid spoiler that give it an understated sportiness.

While it may not have much originality to its design, the Fusion is the better-looking car.

Slip inside either machine and you’ll find a spacious and accommodating interior. While neither cabin would fool passengers into believing they were in a luxury car, they’re nevertheless fairly well appointed.

The Ford’s front seats hug occupants more tightly; and finished in a faux-suede material, prevent butts from sliding around in spirited driving. Plus, unlike the Passat’s, the Fusion’s seats are both heated and cooled (the Passat tries to make up for that by heating buns in both the front and the rear seats, though). Ford gives its driver a heated steering wheel that VW unfortunately does not.

Volkswagen has finished the Passat’s cabin with two-tone black-and-grey leather seats and an otherwise staid, and very classically Teutonic interior; where the Fusion’s expanses of drab, cheap-looking (and feeling) plastics smack of budget constraints. Managing Editor Michael Bettencourt was less charitable with the Passat’s interior, feeling some of the materials weren’t up to snuff. Admittedly, both cars offered up comically fake-looking aluminum or carbon-fibre accent trim.

Backseat riders will be happier in the Passat thanks to its bigger windows and appreciably greater legroom, though rear-seat space in the Ford is still suitable to accommodate adult-sized passengers, and dimensionally, is very similar to the VW.

To pick a preference here comes down to whether a buyer values features over simple, clean design, and space.

The infotainment systems of these two machines are closely matched. Each car presents information sensibly through a series of easy menus accessed via a touchscreen interface. Neither car’s screen features the utmost of resolution or graphic sophistication, but both get the job done effectively, offering decent GPS navigation, Apple CarPlay and Android Auto connectivity, and an excellent sound system. Ford utilizes a system tuned by Sony while the Fender-tuned VW unit remains one of our favourites in a non-premium brand.

If there’s one aspect that puts the Fusion slightly ahead of the Passat’s infotainment system, it’s the Ford’s ability to provide more detail through a pair of supplementary screens bracketing the speedometer, enabling great customization of available driver information. 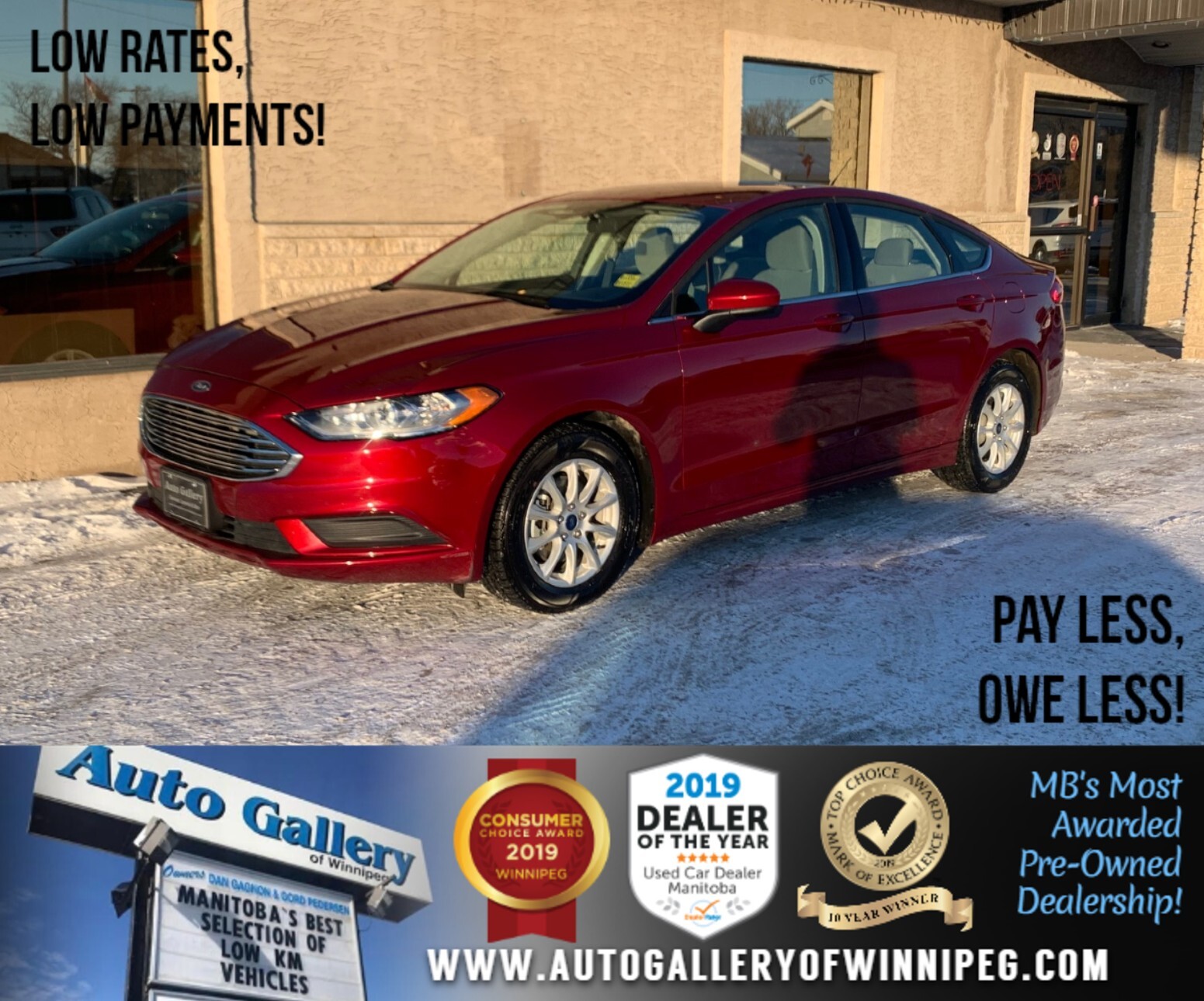 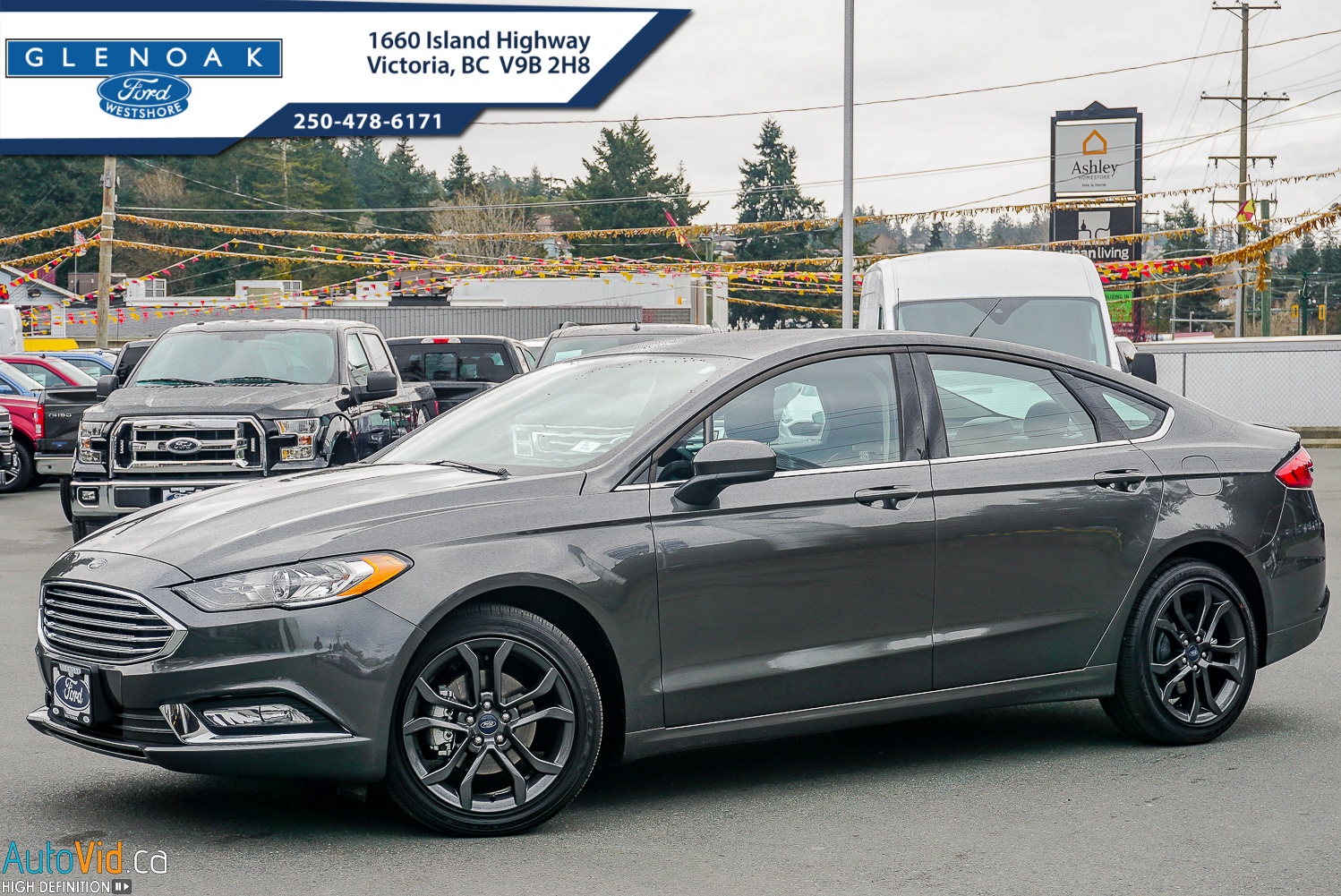 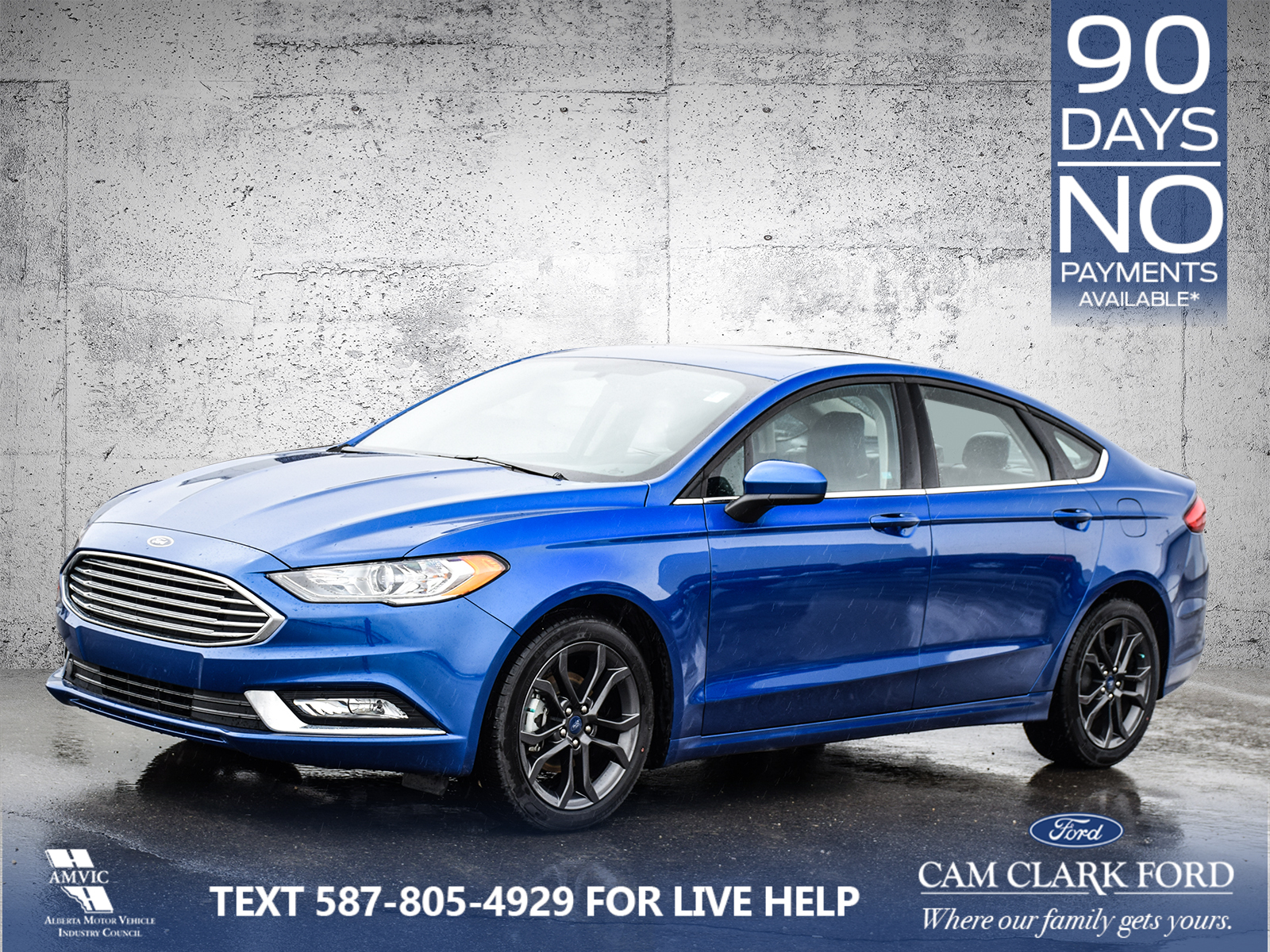 Here’s where things get interesting.

For the GT trim, Volkswagen drops in its melodic narrow-angle VR6 engine. Displacing 3.6L, this naturally aspirated mill is an old-school design, but such a sweet, smooth engine. Upon start-up, the sound emitted from the twin tailpipes will surely have passersby looking around for a high-end sports car. It’s not loud, but musical enough to make enthusiasts nod in appreciation.

The Passat’s 280 hp and 258 lb-ft of torque move the 1,620 kg sedan with pleasing authority and are managed through Volkswagen’s fast-changing six-speed DSG transmission.

Handling is decent, though despite the GTI-like stripe on the grille, this is a sporty-ish sedan, not a true sport sedan. Steering effort is quite light and there’s not a lot of road feel transmitted to the driver, but the Passat does feel like a lighter car than the Fusion, which it is, but not by much. Grip is decent from the Contiental ContiPro Contact all-season performance tires, but in a typically front-drive fashion, the Passat’s default manoeuvre when cornering hard is understeer, and pulling away from a stop to make a turn will often engage the traction control.

The Fusion’s ace up its sleeve is its standard all-wheel drive. This will surely provide buyers greater peace of mind for all-weather driving, but also helps put the power to the pavement more effectively.

And there’s plenty of power to put down, too. With a twin-turbocharged, 2.7L V6, the Fusion’s 325 hp and sensational 350 lb-ft of torque are the sort of numbers associated with high-end sport sedans. Acceleration, especially in the mid-range at passing speeds, is formidable. In fact, for all its pros and cons, the one stand-out of the Fusion is just how much silly fun it is to blast down an on-ramp or away from a stop light at a rate that causes looks of shock and awe from fellow motorists. It’s a complete sleeper, and that’s lots of fun.

The Fusion’s steering is artificially heavy-feeling and despite having a sophisticated, electronically adaptable suspension (that actually lessens the impact of pothole shock), the ride and handling traits aren’t that much better than the Passat’s.

Brakes are a Goldilocks situation with the Ford’s being really grabby and the VW’s requiring a long push through mush to get any braking bite.

While the steering and handling of the Volkswagen feels more precise, the power and grip of the Ford make it more fun, and probably more usable for most drivers, giving the Fusion the edge in the performance ranking.

We’ll concede that this is where sedans falter compared to the oh-so-popular crossover SUVs, since the ’utes have big, boxy openings at the rear. That said, how often do folks really carry bulky cargo requiring all that cargo hold height? The trunks in both the Fusion and Passat are very generous.

By looking at the photographs with our patented autoTRADER.ca cargo-measuring pedal car, the Volkswagen’s wider and more squared-off opening gives the illusion of a bigger space. In fact, the Fusion’s trunk at 453 L, is over 20 L more capacious than the Passat’s. Pushing the pedal car as far forward as possible inside each of the trunk reveals just how deep the Ford’s cargo hold is.

The Volkswagen does have a larger fuel tank (70 L vs 66 L) and in the combined government fuel ratings, shows a 1.2 L/100 km advantage over the Ford. Considering the additional power and torque, however, we’d happily trade-off that consumption.

While we would like to give an honourable mention to Volkswagen for its wide opening, the larger trunk on the Ford has to win, especially since the fuel consumption numbers are so close.

Subjectively Ford has won our hearts for its better styling and lusty drivetrain, and objectively has provided comparable interior space and a larger trunk. What’s more, the Fusion Sport is loaded up with more luxuries like cooled seats and a heated steering wheel, but it’s also got more convenience and safety functions. Adaptive cruise control, lane-keeping assist, and even hands-free parking assistance is all included by Ford. The Volkswagen has none of that.

But, there is a price to pay for all that power, the all-wheel drive, and high-tech features, and the list price for the Fusion Sport is $11,000 higher than the Passat GT, ringing in at over $45,500. A price gap that huge is bound to make a lot of would-be buyers think twice about whether they need their family car to have all that the Fusion Sport is offering.

Ford, however, currently has delivery allowance and Employee Pricing discounts that remove more than $5,000 from the cost of the Fusion Sport. Is the Fusion Sport worth a price premium around $5,000 greater than the Passat? Based on features and performance, we think so.

It’s rare for us to find a clean-sweep victor in our comparison tests, but here, ladies and gentlemen, the Ford Fusion Sport has won us over in each category. The Passat is a good car, and the MSRP price gulf would do a lot to make us rethink the value of the Ford, but discounted as it is, the Fusion Sport makes a pretty good buy, especially as Bettencourt points out the Volkswagen’s “power and traction deficit that in a sport sedan is tough to look past, no matter the season.”

Both of these sedans are familiar sights on Canadian roads, but there’s no question they’re on life support by the manufacturers now, and it’s only so long until the plug is pulled. For consumers – especially those who appreciate the qualities of a sedan with a sporting edge – that translates into the chance to score a big deal.

Picking up a heavily discounted Fusion Sport could be a great score.