Chocolate and peanut butter. Macaroni and cheese. There are more than a few things that are good on their own and then get better when they’re combined. And that’s the case when you mash Fiat and Mazda together to get the 2018 Fiat 124 Spider.

This Fiat impresses with steering that’s sharp but not twitchy, its curve-hugging agility, and its beautiful balance.

It’s built in Japan and based on Mazda’s MX-5, which remains one of the all-time great drivers with its near-perfect balance and handling. To this, Fiat adds a torquier engine, its own suspension tuning, and its own styling that renders the car slightly longer than the Mazda version.

For the Abarth version, as my tester was equipped, the engine gets a slight bump up to 164 horses. While the Abarth normally puts out 184 lb-ft at 3,200 rpm as other trim levels do, sliding it into the “Sport” mode exclusive to that trim makes the torque peak at just 2,500 rpm. An automatic transmission is available, but my Abarth required that I row my own six speeds.

Pricing starts at $33,495 for the Classica trim, at $36,495 for Lusso, and at $37,995 for the Abarth. By comparison, the 2019 MX-5 begins at $32,900. FCA likes to offer options and my Spider was heavily loaded with them, including such goodies as leather-clad seats, auto-dimming mirrors, blind spot monitoring, navigation, adaptive LED headlamps and Brembo brakes, bringing it a considerable bump up to $48,880.

The price also included a “hand-painted heritage racing stripe,” turning the hood and trunk matte black, for $2,995. Count me out: heritage or otherwise, not only did I think it made the car look unfinished, but it comes with a six-page brochure explaining everything you have to do to look after the matte paint, right up to how to hand-wash the surface, and the need to dilute your windshield washer fluid because the full-strength stuff can leave marks.

To say that I love driving the 124 is an understatement, especially when the weather cooperates for top-down motoring. You can get more powerful sports cars, of course, but sheer grunt isn’t everything. Instead, this Fiat impresses with steering that’s sharp but not twitchy, its curve-hugging agility, and its beautiful balance. It feels quick but not overpowering, and the ride is calmer and smoother than you might expect. You can certainly have some aggressive fun with it, but if you just want to go for a top-down Sunday drive on a quiet rural road, the 124 is a composed and classic cruiser. 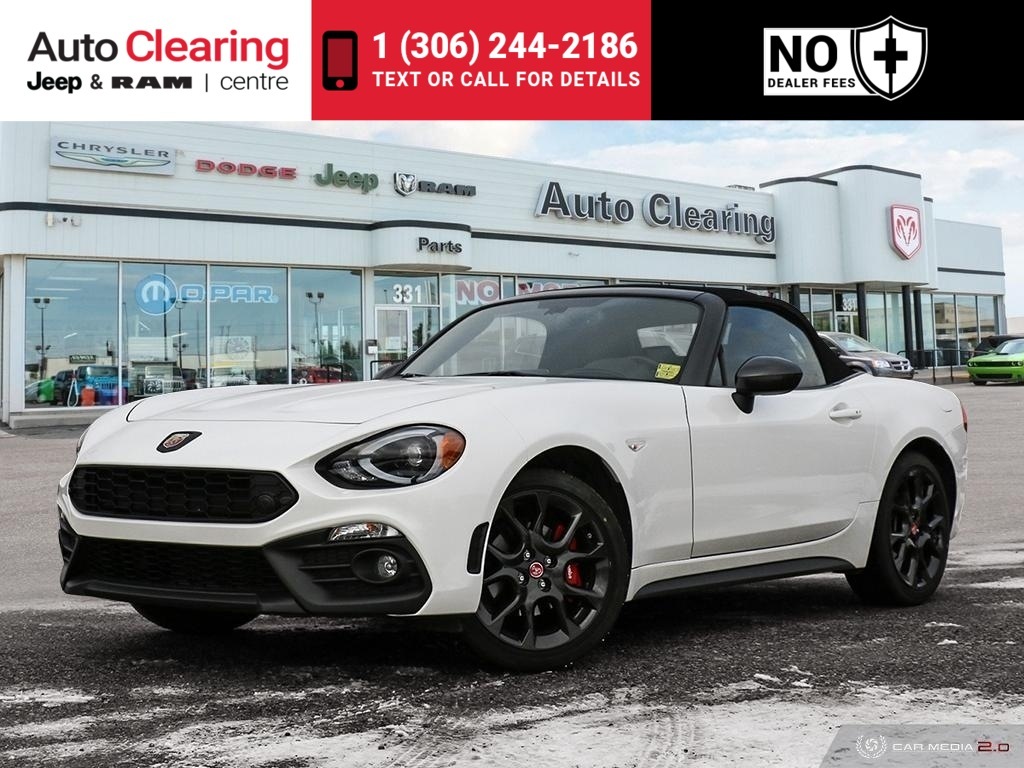 You definitely want the stick shift. It moves into each slot with snickety precision, its gears well-spaced for this engine’s power band and its clutch catching at just the right spot in its travel. A hill-hold function makes it easier to tackle traffic lights on inclines. If there’s any issue with the 124’s performance, it’s that the Abarth’s exhaust could use a bit more gruff. I don’t want it too loud, especially in a top-down car, but it’s a bit too calm for the car’s sporty nature.

Officially, the 124 Spider is rated a combined highway/city consumption of 7.9 L/100 km, but over my week with it – much of which was the aforementioned top-down cruising on rural roads – I managed 7.4 L/100 km. Regular-grade fuel is acceptable, but 91-octane gas is recommended.

The cabin is unmistakably MX-5 with only a couple of cues from the Fiat side of things. It’s tight inside, especially for taller drivers. Small-item storage is equally scarce: there are no door pockets, the covered console box is a shallow indentation, and the cupholders are small, upright rings. The largest compartment is a locking glovebox between the seats. The trunk capacity is 140 litres, which should handle a couple of small overnight bags; the good news is that there’s no intrusion into it when the roof is down.

The infotainment system is perched tablet-style on the dash. It’s a touchscreen, but its features can also be activated by a console controller that combines buttons and dials. It’s intuitive, although some functions require paging through a couple of screens; it’s not the simplest or best system I’ve used, but it’s also far from the worst. Bluetooth is standard, but Apple CarPlay and Android Auto have yet to be integrated into it.

You’ll notice there’s no power switch to operate the roof. The MX-5’s manual soft top has always been a marvel of simple-is-best. To open it, you unhitch the latch at the top of the windshield, push the roof back, and then give it a final nudge to lock it into place, where its front section acts as a tonneau cover. To close it, you unlock it by hitting a button between the seats, pull the top up, and flip the front latch closed. It’s small and balanced enough that you can put it up or down without getting out of your seat. Surprisingly, the 124 Spider’s cabin is much quieter than I expected it to be, even when the top was down. (Yeah, I know, I want a quiet cabin but a noisier exhaust… there’s just no pleasing some people.)

Both the MX-5 and the Fiat 124 are such good cars that there really isn’t a clear-cut winner, and much will come down to whether you want to pay the extra shot to get the Fiat’s extra power. The Abarth takes you up the ladder and I like its performance and sportier suspension, although I wouldn’t load it up quite as lavishly as my tester was equipped. In a world where many buyers primarily want the latest technology and the vehicle itself is almost secondary, there’s something so beautifully refreshing and simple as the sheer joy of driving a car like this.

About Jil McIntosh
Jil McIntosh writes about new cars, antique and classic cars, and the automotive industry. A member of the Automobile Journalists Association of Canada (AJAC), she has won several awards for her writing, including Journalist of the Year in 2016. In addition to testing new vehicles, she owns two from the 1940s.
Follow me
You may also like
7.7