Surely, peak saturation for the crossover market must be within reach by now. Automakers have been struggling to fill the black hole of public demand with an ever-growing variety of the things – and still, that appetite seems ever insatiable.

Pretty darned easy to get along with.

Ten years ago, crossovers were looked upon as recreational vehicles with a market share that was barely a third of the passenger car’s. Every manufacturer has since upended its model strategy to concentrate on producing a lineup of utility vehicles – one to fit every demographic. Last year, nearly half of the two million vehicles sold in Canada were crossovers – almost double the number of sedans and coupes.

So profitable has the segment become, that even such prestigious marques as Jaguar, Bentley, and now Rolls-Royce have all taken the crossover plunge. So it hardly seems surprising that Volvo, that stalwart Swedish manufacturer of sensible wagons and tank-like sedans, has followed suit with its own lineup of utility vehicles. And for its very first step into the compact SUV market, Volvo now presents the XC40.

Fortunately, there’s not much redundancy in this slick little crossover. Unlike some manufacturers who spread one look across the lineup so that all of their utility vehicles resemble differently sized versions of each other – like parents who annoyingly dress their kids in matchy-matchy outfits – Volvo’s given the XC40 its own look. It’s still recognizably a Volvo, from the familiar “iron symbol” badging, and the “Thor’s Hammer” DRLs to the L-shaped flourish of its LED taillights, but the designers have taken great pains to give the XC40 an identity of its own.

For starters, it isn’t underpinned by a shrunken version of the XC60/90 platform, but rather a brand-new “compact modular architecture” that uses a more cost- and space-efficient four-link rear suspension setup.

Utility vehicles are by nature an inherently boxy shape, and designers can’t venture too far outside its parameters to create a unique look without compromising efficiency. Volvo’s creative team have done a great job with this little crossover, breaking up the sheet metal with geometric flourishes and creating some interesting surface tension. The belt line swings up dramatically from the C-pillar where it’s capped off neatly by a tidy roofline spoiler. In profile, our R-Design model has been visually slenderized and lowered – an optical illusion created by the contrasting black roofline and lower trim. The clamshell hood is a nice touch of upscale flair. It projects a cocky, youthful image, somewhat like Range Rover Evoque, but more cohesively pulled together and less awkward.

That vibe carries over into the cockpit. Unlike most Volvos, which are somewhat sombrely rendered, the XC40’s cabin is a little less serious and more playfully executed. While ours is clad in no-nonsense black leather upholstery, one could select the choice burnt-orange seat insets with matching door panels. A convex strip of checkered, machined aluminum instead of the usual dry-pore Swedish birch encircles the driver-centric cockpit, with aluminum pedals adding more sportiness.

The centrepiece is a 9-inch vertical display that is both clean and simplified yet adds layers of complexity to the interface. The iPad-like touchscreen contains all the cabin’s connectivity, entertainment, and comfort functions, eliminating the need for superfluous switchgear. While this lends streamlined elegance to the dash and console space, a long, distracting learning curve precedes familiarity. 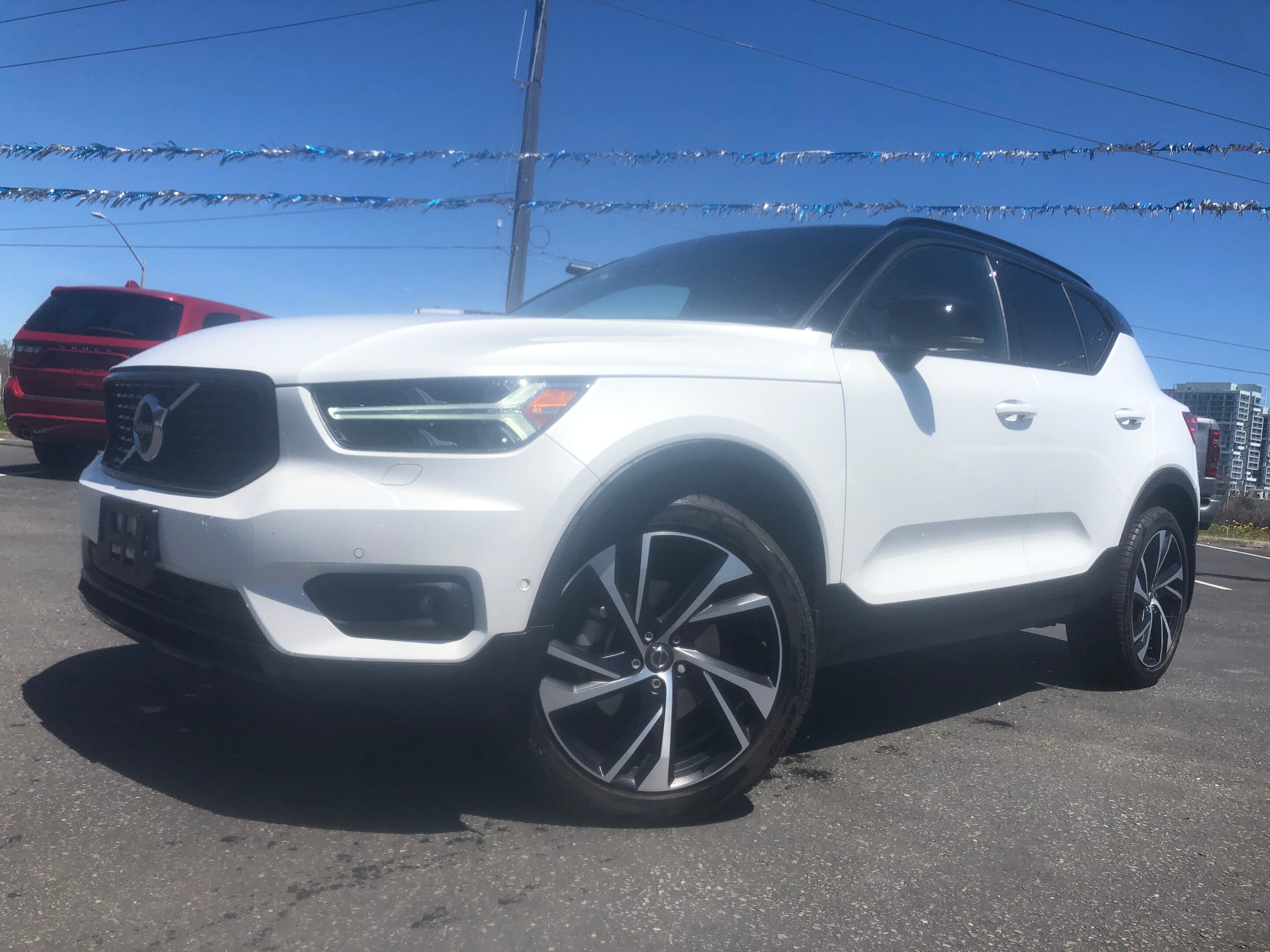 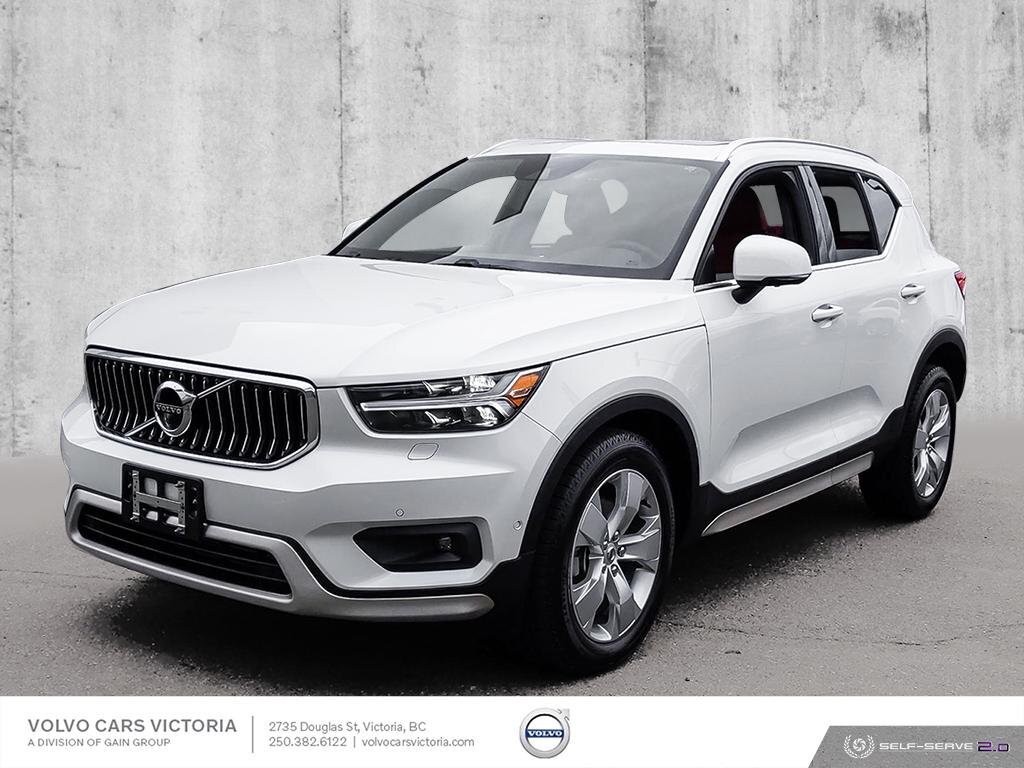 The cabin’s bisected by a genuinely useful centre console with cubby space and a smartphone charger ahead of the shifter, and an ingenious console with its own removable lidded garbage bin. There are many such touches throughout the interior – small practical gestures that make the XC40 pretty darned easy to get along with. The Harman Kardon sound system’s speakers are located on the dash rather than the doors – which free up enough space for laptop-sized door pockets.

I once wrote an entire piece about being driven to distraction by the maddening slither of grocery bags rolling around in the cargo hold – which the XC40 addresses with a folding, origami trunk floor that neatly holds loose cargo within a deep compartment. At 460 litres, it’s not the biggest trunk in the segment – that honour goes to Jaguar’s E-Pace with 577 L, but it slots in between competitors Audi Q3 and BMW X1. The power-operated rear seats drop to create a perfectly flat load floor with 1,336 litres of total cargo space.

For a compact vehicle, the XC40 feels quite roomy inside, thanks to its machined alloys being pushed to all four corners of the vehicle, and a panoramic sunroof (standard on R-Design) that imparts an open, airy feel. The rising belt and dipping roofline do close in the rear passenger compartment somewhat, not to mention being a rather large visual blind spot – the large, 360-degree camera display mitigates this in dramatic fashion.

Under the clamshell hood is a 2.0L turbocharged four-cylinder, standard across the trim levels, that puts out 248 hp and 258 lb-ft through an eight-speed automatic transmission to all four wheels.

Peak torque arrives at 1,800 rpm and that instant response makes the XC40 feel more powerful than the numbers may suggest. While the power is the same throughout the lineup, the R-Design has a specially tuned sports suspension for tighter handling and reduced body roll.

Of course, being a Volvo, the XC40 comes with a bristling phalanx of onboard safety systems. This is the company, after all, that boasted “death-proof cars” by 2020 – an ambitious mandate that promises that no one in future will be killed or suffer serious injury while driving a Volvo. Standard XC40 equipment includes a collision-avoidance system that detects oncoming vehicles, pedestrians, cyclists, and large animals; lane-keeping assist; and blind-spot and cross-traffic alerts.

Like most of its stablemates, it cruises along in quiet serenity, though the turbo-four does tend to get buzzy at high rpms. Steering is sharp and accurate, if a bit devoid of feel – but the small, meaty wheel has nice short ratios and the XC40 is easily manoeuvred around tight urban spaces. There are four drive modes to choose from: Eco, Comfort, Dynamic, and Offroad. I found Eco entirely too somnambulant; Dynamic exaggerated the throttle response but also amplified the engine buzz; and Comfort was just right for most daily driving.

The shifter itself is a bone of contention for most users – the gates are ill-defined and it’s easy to find yourself going nowhere in Neutral. The auto stop–start system is another annoyance; with rough, stumbling transitions instead of the seamless function offered by some of its premium competitors. My observed fuel economy of 10.1 L/100 km was considerably higher than the official 9.0 L combined official rating, but to be fair, my week’s drive test consisted of a lot of short, inner city runs with various passengers and cargo – which is pretty representative of how this vehicle will be driven.

Given that its rivals in the premium compact crossover segment are the Audi Q3, BMW X1, Mercedes GLA and Range Rover Evoque, Volvo’s entering a space that isn’t about to make room for more players. But with its cleverly useable interior space, long list of safety features, and stylishly elegant looks, the XC40 should be able to hold its own.

About Lesley Wimbush
In 5th grade, Lesley traded drawings of muscles cars for chocolate bars and things really haven't changed much since then.
Follow me
You may also like
7.9