Key purchase considerations included high residual values, a strong reputation for reliability, top safety scores, and reasonable up-front pricing. The MDX is highly sought after by owners who want a no-nonsense premium utility vehicle experience that won’t break the bank, and one that’s a solid investment and won’t depreciate rapidly.

Look for the used MDX with a 3.5L V6 engine, generating 290 horsepower. A six-speed automatic was standard in 2014 and 2015, but was replaced with a more efficient nine-speed automatic from model-year 2016.

Though sales volumes were relatively low, this generation MDX was also available as a Sport Hybrid, from 2017. This partially electric MDX got a 3.0L V6, seven-speed dual-clutch transmission, AWD, and hybrid power for improved performance and thrifty mileage. The Sport Hybrid was the most powerful MDX, with 321 horsepower. It was also considerably easier on fuel than the conventionally powered model. If you’re set on an MDX Sport Hybrid, shop patiently, as used selection will be somewhat limited.

On most aspects of space, ride comfort, all-season confidence, and flexible interior seating and cargo provisions, the MDX seems to have hit the mark. Many owners note a solid, quality feel, and upscale cabin trimmings. The ELS audio system and chilled seats were among the most commonly favourited features. Mileage is highly rated, especially on Sport Hybrid models.

Common complaints include a dated-looking infotainment system, with a clumsy-looking dual-screen display and poor graphics. Other gripes include the relatively generic styling to the interior and body, neither of which seem to be intended to stir much emotion by their appearance. Note that a facelift applied for model year 2017 enhanced the exterior styling with a new fascia and more dynamic appearance. Low-resolution display graphics from the outward-looking cameras round out the list of gripes.

Don’t underestimate the effect of a past owner’s care and maintenance – or lack thereof – on the vehicle you’re considering. Even a vehicle that’s highly rated for reliability can suffer numerous problems if former owners have skipped or stretched maintenance intervals, or cared for the vehicle poorly.

Seek out service records proving that no maintenance, tune-ups, or inspections have been missed, and remember that even the most reliable vehicles on the road require ongoing servicing and maintenance to keep them in tip-top shape for the long haul.

According to this discussion, used MDX shoppers are advised to be on the lookout for signs of a not-uncommon issue with out-of-spec alignment. Trouble signs include shimmies or vibrations from the vehicle’s front end, a tendency to pull (sometimes aggressively) to one side or the other, or a steering wheel that sits slightly off-centre as the vehicle drives straight down a flat surface. Driving a vehicle that’s out of alignment results in degraded handling, increased fuel use, decreased safety, and accelerated tire wear. If you detect any trouble signs as listed above, be sure to obtain an estimate to have the vehicle inspected and addressed by an Acura technician, before you buy.

Information in this discussion reveals that numerous owners have reported a clunking or slamming sensation during certain gear shifts on models equipped with the (2016+) nine-speed automatic transmission and towing package. Acura released a Technical Service Bulletin (TSB #15-054) to try and address the problem, with limited success as reported by owners.

Some dealers have told owners that this sensation is normal, and that a fix is not available. In any case, shoppers who will handle towing may be best to stick with the more proven six-speed automatic from earlier MDX models in this generation. 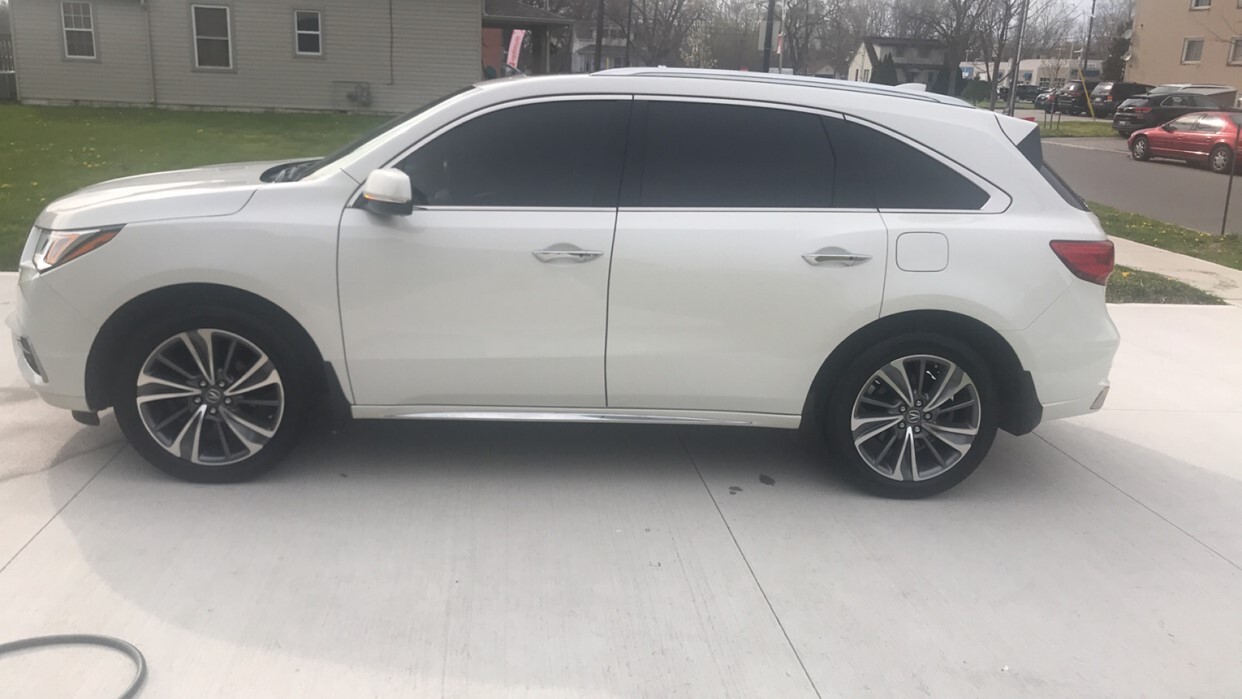 Some owners have reported sporadic operation of the MDX’s auto stop-start system, which turns the engine off in certain situations when it would otherwise idle, and restarts it when the brake pedal is released. According to this discussion, some owners have had dealers apply updated control software to this system, or perform a hard reset of the module that controls it. If the auto stop-start system doesn’t perform as outlined in the owner’s manual, or displays any error or warning messages via the instrument cluster, be sure to have a dealer investigate.

Note that this system only works if certain parameters are met, and that, by design, its operation may be affected in certain temperatures, if the driver seatbelt is unbuckled, or if the engine isn’t up to operating temperature. Do not attempt to fix problems with the auto stop-start system by disconnecting and reconnecting the vehicle’s battery.

Though reports of issues are relatively rare, shoppers are advised to run all accessories within the MDX they’re considering through their paces, several times on each test drive. Confirm that all seating functions, rear-seat entertainment provisions, climate control functions, and advanced safety features are working as outlined in the owner’s manual. Check rear seats for proper operation of all adjusters and latches; and confirm that the sunroof, all power windows, all remotes, all door locks, and the push-button ignition are in proper working order, too.

Though brake system wear is subject to many factors, some owners have reported premature wear and warping of brake system components, which leads to unwanted sounds during braking, or a shudder or vibration from the vehicle’s front end when the brakes are applied. In many cases, owners have reported success in having dealers replace the brakes on their vehicles, under warranty. If you note any unwanted sounds or sensations during braking on your MDX, be sure to have an Acura technician investigate.

Beware of Poor Maintenance by Past Owners

Here’s yet another discussion thread where owners ask whether or not they need to maintain their vehicle as per the service schedule in the owner’s manual. This particular owner is wondering which items on a scheduled service they can skip, if not all of them. Take steps to ensure you are not buying a used MDX from a seller who considered regular maintenance to be optional, by examining the maintenance schedule in the owner’s manual, and obtaining service records (which may be stored in the servicing dealer’s computer system) that prove everything is up to date. Buying a used MDX that’s had maintenance intervals stretched or skipped can compromise the vehicle’s long-term reliability, lead to pricier repairs down the line, and will likely void parts of any remaining warranty coverage.

As the MDX’s 3.5L V6 engine is direct injected, shoppers should plan to have all oil changes and spark plug changes completed ahead of scheduled intervals, for maximum protection against valve gunk deposits possible in this type of engine. Do not stretch spark plug change intervals, or oil change intervals, even slightly. Use factory-specified parts and fluids for these items when required, for best results. Further, only fuel your MDX with Top Tier gasoline from a reputable retailer, using the octane grade specified in the owner’s manual.

Adhering to these steps may help fend off possible valve gunk problems indirectly, by helping keep the engine’s intake system and fuel system as clean as possible.

If you’re set on an MDX Sport Hybrid, be certain to budget for a full inspection and checkup of the vehicle by a hybrid-trained Acura technician before your purchase. Online reliability information is scarce and few problems have been reported, if any. Still, given the complex nature of hybrid vehicles and their additional componentry, purchasing one without a full, professional inspection is strictly not advised. Contact your nearest Acura dealer to set this up.

Here’s a list of recalls. You can quickly look up any applicable recalls on the Hyundai website by using the VIN.

This generation of MDX has not been totally trouble-free, though most issues reported with enough frequency to warrant concern should be easy to detect on a test drive, and easy to address. For maximum return on your investment, be sure you’re buying a healthy used MDX that’s fully up-to-date on maintenance, and one with its warranty still intact, in full. A healthy and well-maintained used MDX can be bought with confidence, especially after a thumbs-up from an Acura technician performing a pre-purchase inspection.