There is almost nothing Hyundai won’t sell you. An upscale sport sedan? Sure! Although they’re trying to pull the Toyota/Lexus rebranding trick with Genesis, the G70 is frankly excellent. A family-oriented crossover? The Santa Fe is a long-time Canadian favourite, and we should be getting a new three-row model any time now.

Exactly what most people need.

Hydrogen-powered buses? Yep. Twenty-five ton dump trucks? We make those. A cargo ship with the capability to carry 20,000 shipping containers? Right this way, sir. Mass-transit monorail? Why, Hyundai can put you on the map like Brockway, Ogdenville, or North Haverbrook.

However, for most Canadians, Hyundai is first and foremost a manufacturer of economical, compact runabouts. We like those in Canada, being the nation who puts the “skate” in “cheapskate”, and we’ve a particular fondness when you can get one of these thrifty little Korean cars in a useful hatchback version.

The 2018 Hyundai Accent, combining hatchback and an available manual transmission, is particularly loved in French-speaking Canada, and has plenty of appeal for us Anglos too. Even while other manufacturers begin abandoning the manual transmission as we move towards our crossover-laden future, Hyundai still makes sticks for those who want them. And they won’t make you choose between niceties or a desire for three pedals either, as this well-equipped GLS model isn’t missing much.

Honda and Toyota pay attention: this is the kind of styling people want in their little car. Yes, Hyundai could be accused of copying the Germans’ homework a little too closely over the past few years (and poaching some of their best stylists and engineers), but is that such a problem if you’re the one with the shopping list? The Accent is a sharp-looking, unfussy design. The grille’s probably twice as big as it needs to be, but that’s the sole reach for a car that seems built around the word “restraint”. If you’re reading this and are the stylist responsible for the front end of the Corolla XLS, you might have to go look that one up in the dictionary.

The 15-inch steel wheels are standard on the base Quebec special model, with 15-inch alloys as the first upgrade, and 17s on the GLS trim. The GLS also gets disc brakes at all four corners, while the entry level models still have drum brakes out back, but a set of basic 15-inch wheels for winter duties should still fit just fine. The 205 mm Continental all-season tires on the GLS aren’t the cheapest to replace, but are a relatively available size.

Inside, the Accent first impresses with space. The huge (616 L) cargo area is particularly good, although the lip with the hatchback open means it’s more oriented for grocery carrying rather than heavy objects. Watch your back after your Ikea trip.

Back-seat legroom is fine for the subcompact class, and with two younger kids to haul to and fro, was perfectly acceptable. Up front the GLS gets a bit of sporty accenting with some red trim on the seats and on the doors. The former will be useful as a little extra protection on high-wear areas like the seat bolsters. Cabin storage was good too, although an extra USB charger would have been useful – there’s a spot for an extra 12V power outlet, but it’s blanked off for some reason. 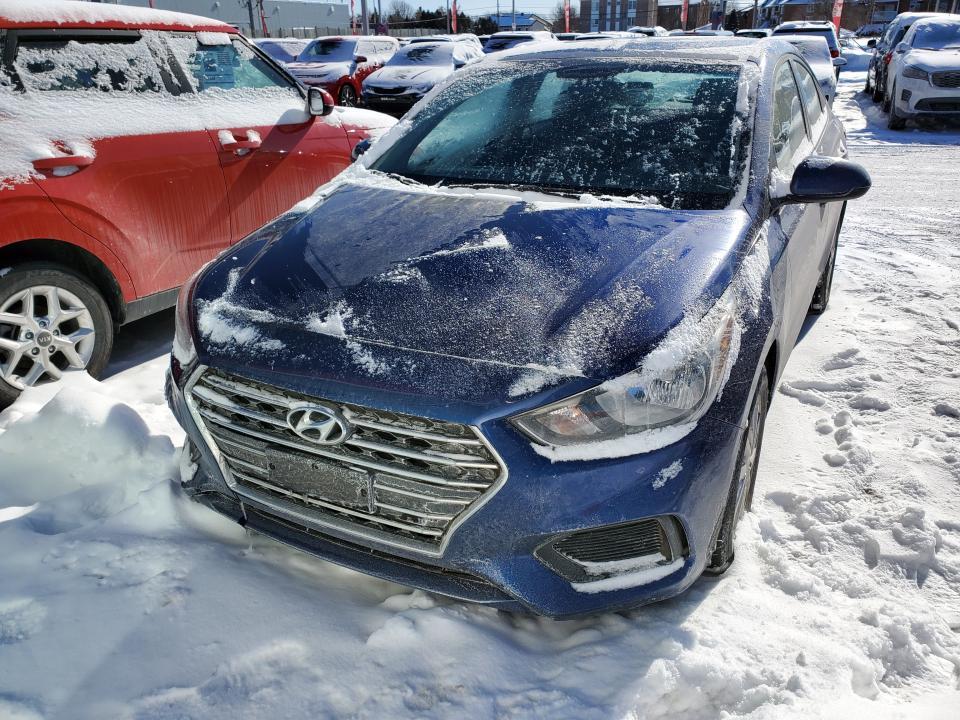 Just as the exterior is all business, and the better for it, so too is the Accent’s fancy-free dash layout. Eight buttons and two knobs back up the touchscreen controls. Android Auto and Apple CarPlay are available on the GL and GLS trims, and even the base model’s 5.0L touchscreen has an iPod connector. Bluetooth and air conditioning aren’t available on the cheapest L model, but the mid-grade GL has both and voice recognition.

This GLS piled on the trickle-down amenities with keyless entry, push-button start, and even a heated steering wheel to go with the heated seats. Given the ability to run navigation from your smartphone, is there much more needed?

Perhaps a little pep. With a 1.6L direct-injection engine making 130 hp and 119 lb-ft of torque, the accent here is on economy rather than performance. A compact car with a small-displacement turbocharged engine makes hills effortless; in the Accent, you’ve got to downshift and give it a few revs.

Which is not to say the Accent is slow, merely modestly powered. The six-speed automatic has been noted by others as a little sluggish, but the manual allows the driver to poke the four-cylinder awake and extract what power it has. The chassis is not exactly a pocket-rocket grade, with relatively numb steering that doesn’t encourage spirited driving, but there’s more than enough competence here to carry a little momentum when you need to.

As for the manual, clutch and shifter feel are a little on the vague side, but livable. Selecting reverse takes a moment’s deliberation, but you can shift the Accent smoothly through the rest of the gears without too much slop. Like the steering, the shift action is neither crisp enough to be exciting, nor sloppy enough to be irritating. This is a perfectly acceptable powertrain that just wants to get on with the business of daily driving.

Ride comfort is good but firm. The 17-inch wheels of the GLS are probably at the top end of the range for what you’d ideally want in unsprung weight, so a 15-inch wheel on GL models would be a better choice for taking on east-coast potholes. On relatively smooth BC roads, the Accent was free of any signs of choppiness.

Further, despite the tires being a little noisy on the road, the Accent’s engine was refined enough not to make highway travel unpleasant. Despite being a subcompact, the Accent dispatches the buzzbox stereotypes of the past. It feels substantial enough on the road to be a solid commuter, with enough hatchback flexibility for more adventurous weekend plans.

You won’t, however, head out on Saturday morning without first filling up your Accent. The fuel economy is quite good, and some parsimonious upshifting will easily see you hitting official numbers. However, the Accent’s 45L fuel tank is hilariously small. Or, if you haven’t read the owner’s manual, it is hilarious when you clock the half-full mark on the fuel gauge, wonder, “Have I been driving that much?” and then fill your car for twenty-five bucks.

After a week driving the Accent, I came away impressed by its overall goodness, rather than any particular standout quality. It looks businesslike, and they don’t charge you extra for the silver or grey paint you’re likely to get. There’s enough space for people and things. It’s not a pocket rocket – but it’s also not that slow. It corners just fine, and feels substantial on the highway. The equipment packaging makes sense.

So yes, Hyundai can sell you a train or a boat or some industrial mining equipment. They build and sell everything anyone could possibly want.

Far more important is that they still build exactly what most people need.

About Brendan McAleer
Brendan McAleer is a Vancouver-based automotive writer, a member of AJAC and a ginger.
Follow me
You may also like
7.8