Three years had passed since I last climbed into the driver’s seat of Acura’s largest SUV, the midsize MDX.

A reputation as a sensible, practical, and luxurious family hauler – and it’s well deserved.

Typically, a three-year gap means the following drive occurs after a mid-cycle refresh, if not the release of a completely new generation, but here we are with a machine that’s virtually unchanged, save for a more attractive front end and the inclusion of a nine-speed automatic. After the previous drive, I concluded that the MDX’s competition was getting increasingly fierce and that it had better not rest on its laurels for long.

This may sound worrying except that everything that made the MDX so darned lovable before, remains true today. Canadian sales reflect this, too, with the MDX showing consistently strong numbers, month after month, with only an insignificant dip this year, most likely due to the age of this rig. 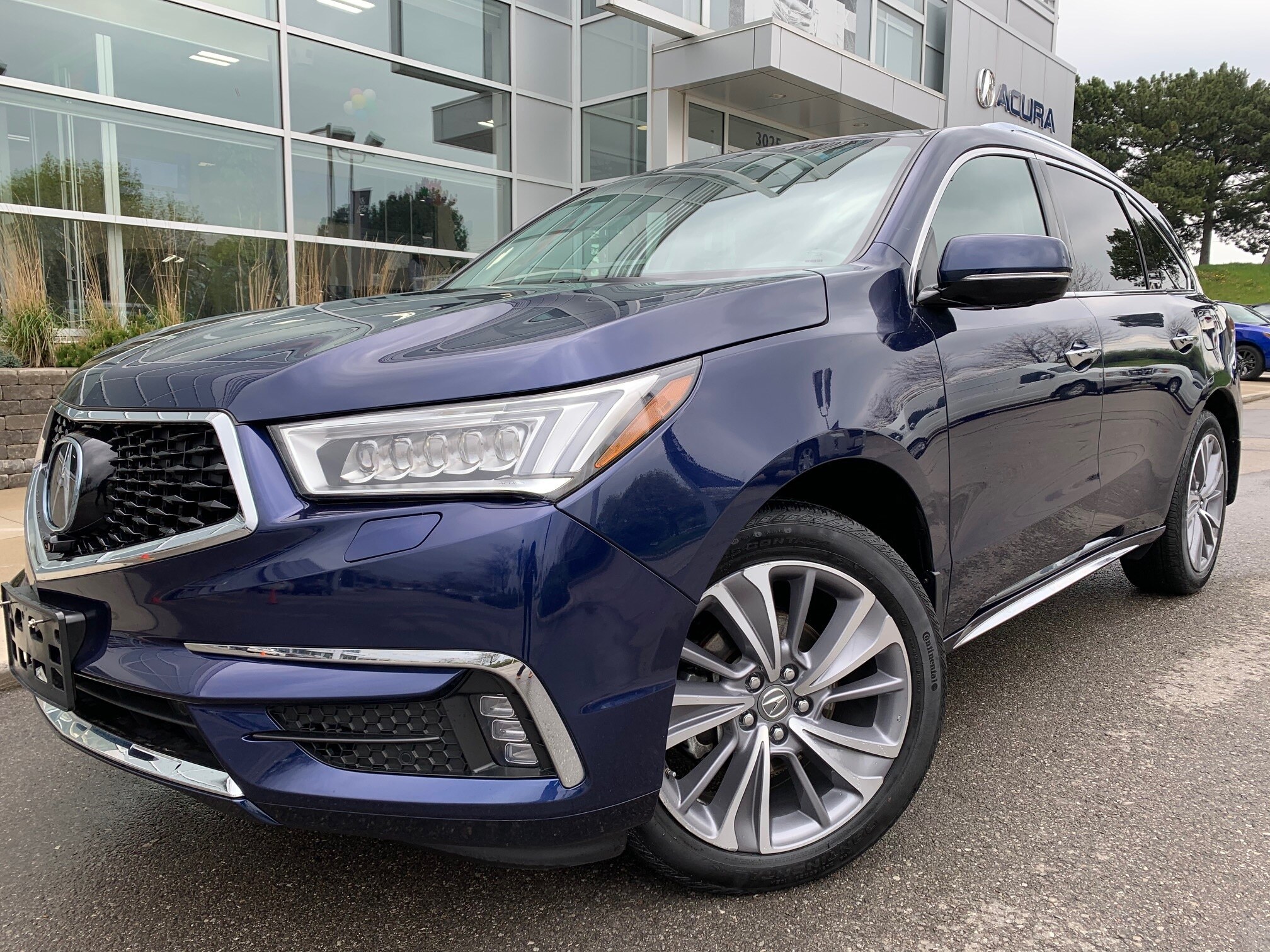 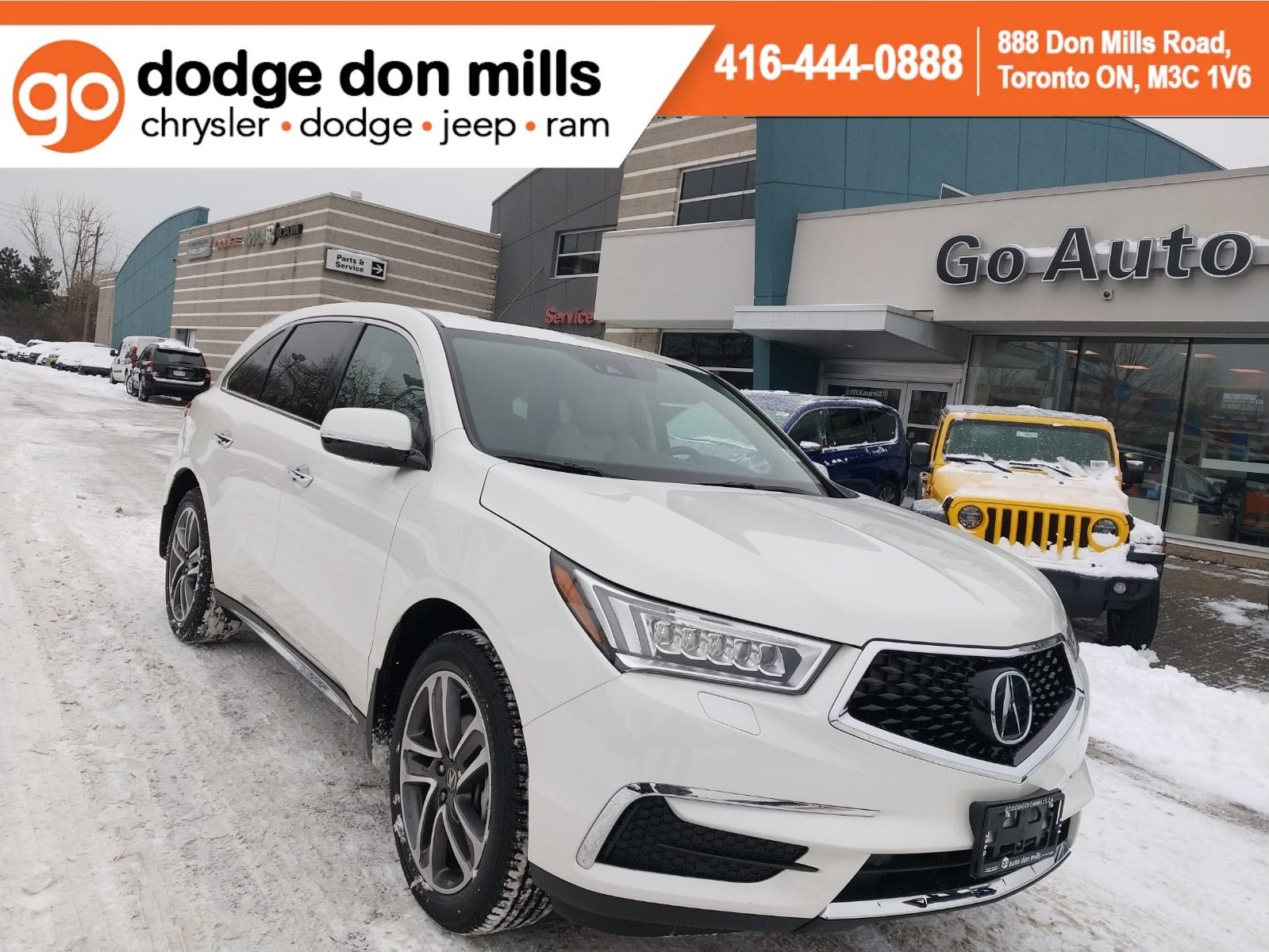 So, what gives? How does the MDX stay competitive in the face of ever more lavish and technologically advanced offerings in the segment?

First off, the styling that was unassuming before remains so, but has been modestly updated with Acura’s latest brand visage that looks quite good here with its squashed pentagon shape and black, radiating diamond pattern that complements the bejewelled row of LED headlights. The profile doesn’t try to pretend the big ute is some sporty coupe-like thing; it’s a proud and portly utility vehicle.

Inside, this translates to very usable space, especially for the third-row passengers who are afforded more foot- and legroom than is typical in the class. The second row, too, is comfortable, particularly here in our Elite 6-Passenger trim featuring a pair of reclining captain’s chairs separated by a wood-topped bin and armrest.

Employing tricks learned from other excellent people-movers in the family (like Honda’s Pilot and Odyssey), Acura makes it stress-free to manipulate the rear seats, with a second row that easily slides and folds forward for third-row ingress, and back seats that, while not power-actuated, are at least easily folded or raised with large handles on the seatbacks.

Acura’s engineers have considered the needs of contemporary passengers that are often overlooked by the competitors. The cabin is filled with ample storage cubbies, cup holders, and USB plug points for everyone. These are the sorts of thoughtful touches that are appreciated over long-term ownership, especially if some of those passengers are device-addicted youths.

Cargo space is also decent. The volume behind the third row is comparable to what’s behind the second row in most compact SUVs, plus there’s a sizeable compartment below that. With all the seats folded flat, the volume grows to a commodious 2,575 L, an expanse that rates among the largest in the class.

The driver and front-seat passenger are well-treated, too, with heated and cooled, 10-way adjustable seats that are both supportive and comfortable, even for long trips. Finished in saddle brown “Milano” leather, as was the case here, they look and feel properly luxurious too, and the genuine olive ash burl wood trim is a great touch.

The expanse of black plastic that makes up the dash top is pliable and features a nice grain, but these days the trend is to cover the dash in vinyl and make it look like a lavish piece of stitched leather. The dash top isn’t the only part that reveals the MDX’s age. The two-panel infotainment system has one low-res and one medium-resolution screen, the latter revealing mapping that looks a decade behind the competitors’ slicker setups. What’s more, the rotary knob controller for the system makes operating some functions tedious at best. Having experienced the new system in Acura’s smaller RDX, we know that with the MDX’s eventual re-do, it’ll get a much better setup. In the meantime, at least the MDX’s stereo sounds great, and Apple CarPlay and Android Auto have now been added.

The rest of the MDX’s ergonomics are quite good with legible gauges and sensible steering-wheel controls. That said, try as I might, I simply couldn’t get used to the annoying push-button gear selector set up that always seems to take an extra second to figure out how to go from reverse to drive, or vice-versa, than with a normal shifter.

Once the gear selection process has been figured out, the rest of the transmission is the MDX’s only real bugaboo in the driving experience. The nine-speed was introduced for 2016 in the MDX (and the top-trim Honda Pilot), and its shifts are pleasingly smooth, but it often seems to be hunting for an optimal gear that it can’t seem to find. What’s more, in the interest of fuel savings, the MDX always seeks the tallest gear it can reasonably get away with, and is reluctant to downshift. While this does produce wholly decent efficiency for a vehicle this size (I saw an indicated mixed driving average of 11.0 L/100 km), it makes for soggy-feeling responsiveness.

The engine – a lovely, smooth-revving 3.5L V6 – is normally aspirated in an era that loves turbocharged, small-displacement engines. This means that despite its size, the engine’s 267 lb-ft of torque comes on at a relatively high 4,700 rpm and requires more revs to really get hustling. This of course, can be challenging when the transmission is always fighting for lower revs. It’s surely enough grunt to satisfy most buyers’ needs, and the MDX is still rated to tow up to 1,588 kg (3,500 lb), but the smaller-displacement turbo engines found in some of the competitors’ machines do have more low-end thrust.

The MDX is a very quiet machine, with engine, road, and wind noise well managed. Occasionally large bumps will be announced by a “thwack”, but generally it’s a smooth cruiser. What makes this more impressive is that the MDX also handles well, especially for such a large, tall vehicle. The suspension that managed bumps so well also keeps the MDX from wallowing around, as it maintains composure and prevents uncouth body roll when driven hard. Plus, Acura’s Super-Handling All-Wheel Drive system helps direct the power to the wheels that can best utilize it, meaning that even when driven hard out of corners (where lesser SUVs would trip all over themselves), the Acura stays composed and claws out of the curve.

At just over $64,000, the Acura MDX Elite is a well-equipped machine that compares very favourably to comparably equipped midsize SUVs from the premium European and Japanese brands. But, for only $4,000 more, Acura offers its MDX Sport Hybrid that’s equally well equipped and features a 3.0L V6 bolstered by a trio of electric motors, delivering power to all four wheels via a seven-speed twin-clutch transmission. The system is like the one found in Acura’s flagship RLX sedan and it provides more power, more torque and notably better efficiency than the “lesser” MDX models. Consumers shopping for an MDX Elite would do well to consider the Sport Hybrid.

The base model MDX is very well equipped and starts at only $52,263, helping Acura’s mid-sizer straddle the space shopped by those looking at non-premium brands (including sister rig Honda Pilot), and those scraping to climb into the luxury crossover segment.

Acura’s MDX has earned a reputation as a sensible, practical and luxurious family hauler, and it’s well deserved. As it has been for years, the MDX remains an excellent choice in the segment and has aged quite gracefully.