JACKSON HOLE, Wyoming – Our ascent up the Teton Mountains has been gradual. A gentle climb meandering back and forth across the Wyoming–Idaho border. From this height, the valley floor is a patchwork quilt, its hayfields dotted with tiny, golden spools.

The 6.2L V8 is monstrously strong, responding instantly when the accelerator’s pressed, yet purring docilely on the highway.

This is big country: home to enormous plains, rugged canyons – and with next to no foothills, dramatically unobscured views of the iconic Rocky Mountains.

It’s no exaggeration to say it’s also truck country, in Wyoming pickup trucks account for 36 percent of overall automobile sales. One in every six vehicles on the road here is a truck – a potent reminder of the importance of this segment outside of the urban landscape.

Up until this latest iteration, Chevy has played it safe with Silverado revisions: a little tweaking here, a boost in power there, but basically retaining the same familiar four-cornered outline since its introduction 20 years ago. The fourth-generation Silverado’s styling takes a daring turn, with swooping curves reminiscent of its smaller Colorado sibling.

Plain, blunt and square has long been its signature face, and the new look is bound to be somewhat divisive with the Silverado faithful. The headlights seem to glower within the wide grille, beneath which the square-jawed bumper protrudes like a jutting chin, and flanked by muscular shoulders which end abruptly in great slashing vents. It’s a bold, menacing look and clearly a departure from the plain beast of burden that’s long been the truck’s image.

Aside from its polarizing frontal view, the new Silverado hasn’t made any radical alterations to its successful formula. Recognizing that it was falling behind Ford and Ram, who’d introduced some revolutionary changes to the segment with the F-150’s all-aluminum body and FCA’s coil and air suspension setup, Chevrolet instead concentrated on streamlining what they already had. The new truck is, in marketing director Sandor Piszar’s words, “the best-driving Silverado yet”.

A half-second quicker from 0–100 km/hr, the Silverado sheds 450 lb thanks to an ingenious blend of various grades of lightweight steel, and new aluminum hood, tailgate, and door panels. But as former GM president Mark Reuss pointed out at the truck’s Detroit unveiling last year (while slyly taking a shot at Ford), the Silverado’s bed is all roll-formed steel. The box, now wider by 6.75 inches, boasts 63 cubic feet of cargo space, which Chevy claims is the best in the business, and now comes with 21 tie-downs, a power tailgate, and lockable cargo boxes on some trims.

Overall, the Silverado’s wheelbase has increased by up to 3.9 inches, but better steering ratios and decreased overhangs give it the agility of a smaller truck.

Unless choosing a basic work truck trim, buyers now expect the same level of features and comfort found in any mainstream crossover. Compared to its rivals, one of the Silverado’s most glaring downfalls was its cabin. Though quiet and comfortable, it was starting to look frumpy and dated.

It’s the little things that generate a positive first impression, and the new push-button ignition is a good start. Likewise the new telescoping wheel, which allows drivers of any height or configuration to make themselves comfortable.

It’s a comfortable environment trimmed in soft-touch materials, but even the top-spec High Country models lag behind the overt luxuriousness of Ram’s Laramie Longhorn, or the F-150’s Platinum trim. However, the seats are wonderfully supportive and have undergone more than 100,000 durability test cycles on what Piszar charmingly described as the “ass-sliding machine”.

But the connectivity system is easy to use, features Apple CarPlay and Android Auto, and as before, boasts a 4G Wi-Fi hotspot and plenty of USB ports for the connected family.

Canadians love trucks too – in fact we bought more than 425,000 of them last year. That’s a wonderful thing for the automakers, but it comes at a cost – selling that many big work vehicles makes it that much harder for manufacturers to meet their average fuel economy standards. The silver lining in that cloud is that it forces automakers to explore new technologies in the quest for better efficiency. The Silverado now adds more fuel-efficient choices to its six-powertrain, eight-trim configuration lineup.

Our time was spent divided between a top-spec High Country with 6.3L V8 with 420 hp and 460 lb-ft of torque, mated to a 10-speed automatic transmission, and an LT Trail Boss with 355 hp and 383 lb-ft with an eight-speed auto. 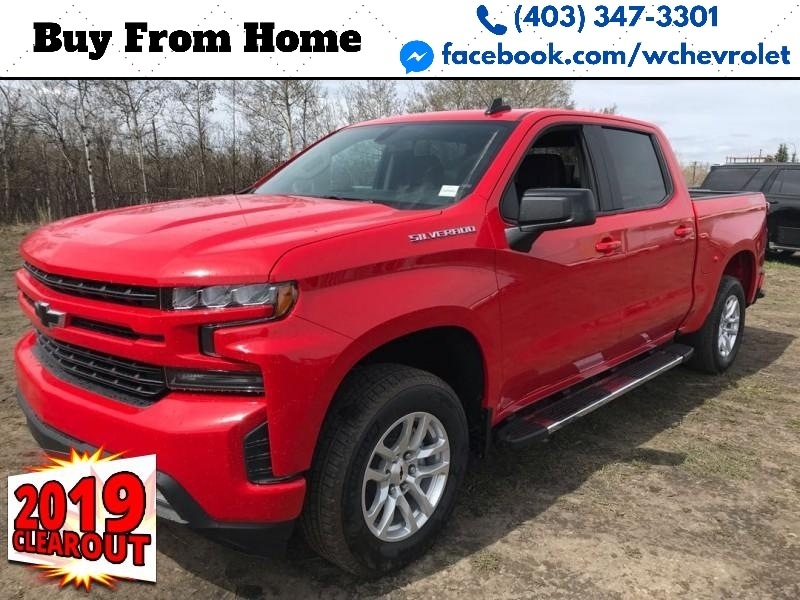 On road, the new truck feels solid, quiet, absorbing most of the backcountry pavement irregularities with little noise nor drama from the unladen rear end. This is thanks in part to the High Country’s two-stage composite rear leaf-springs derived from the Corvette – and the result is a truck that drives a lot smaller than it looks.

The 6.2L V8 is monstrously strong, responding instantly when the accelerator’s pressed, yet purring docilely on the highway. The driver can also opt for more throttle response and steering feel by using a new dash-located performance knob. Particularly nice is the segment-first head-up display, visible when wearing polarized glasses.

I snagged Tim Braman, Engine Calibration Manager for Chevy’s small-block V8’s, for a short ride and explanation of how the new Dynamic Fuel Management technology worked. Unlike the AFM (active fuel management) system still in operation on the lower-trim-level powertrains, DFM doesn’t just shut down groups of two or four cylinders, but in a varying combination of 17 patterns depending on demand, which Braman illustrated by plugging in a data logger that displays cylinder firing fractions (unlike the AFM-equipped models, there’s no driver display for active cylinders). Using information from the throttle, the truck’s onboard computer manages the oil supply modules for each cylinder; shutting off oil for targeted cylinders disables the valve lifters and the cylinder remains dormant.

“Our algorithms are looking at driver-requested torque from the accelerator pedal, and determining what pattern, or how many cylinders, is appropriate,” Braman explains. Altitude, speed, and trans gear are obviously factors in that demand. As we cruise down the relatively flat stretch of road at 45 mph, Braman reads off the fractions: “Right now you’re in two-thirds, seven-ninths, you’re running one-fourth there for a while. One-third is a popular fraction, essentially firing one out of every three cylinders.” It’s a rotating fraction through three engine cycles, which distributes the function across the cylinders and avoids localized wear and tear.

But the primary factor is the efficiency: “The least number of cylinders we can operate on is generally the most efficient, but we still need to meet driver demand for torque and acceleration.” The system operates seamlessly, imperceptibly. There’s no jump from four to six to eight cylinders, and without Braman calling out the numbers I’m completely unaware of just how many the truck is running on. We observed a combined consumption rating of 17.9 mpg (13.1 L/100 km) on these US-spec trucks, and Chevy’s official numbers are 17 city, 23 highway (13.8, 10.2 L/100 km) – while still maintaining a max tow rating of 11,600 lb with this particular engine.

Swapping our High Country for an Z71 with Trail Boss package, we headed over to a small off-road course. This handsome bushwhacker featured a blacked-out face, two-inch lift, Rancho shocks, tow hooks, and rugged underbody skid plates. It clambered over corduroy log trails, boulders, up a vertical climb, and finished dramatically in a spray of mud.

There’s a host of new technology in the new Silverado, including slick new apps such as a Trailering Guidance Camera Package with Hitch Guidance mode to make towing that much easier. Plus, the latest model now includes such Driver assistant aids as forward collision alert and lane-keeping assist, digital rear view mirror, adaptive cruise control and surround-view camera system. But most of these are available as (expensive) options only: It seems that pickup-truck prices, like those of premium cars, are limited only by what customers are willing to pay.

Chevy fans will like that the new Silverado drives like a much-improved version of the old. But it’s still lagging behind segment-leader Ford F-150 in terms of fuel efficiency, payload, and towing – the all-important factors in bringing in new buyers. Still, with a new diesel yet to come, and the Heavy Duty models coming later this year, 2019 should prove a good year for the Silverado.

The new Chevrolet Silverado should arrive in Canadian dealerships this fall, with prices available soon.