Fuel economy, an upscale cabin with plenty of space, generous rear-seat legroom, and a smooth and refined steering feel were highly rated by owners.

Some 40 million units and nearly 50 years after its launch in 1966, the Toyota Corolla hit dealer lots in 2013 for model year 2014. Corolla entered its 11th generation with new features, styling, safety, and technology on board. With a focus on upscale trimmings, a more refined driving experience, and the latest in connectivity, the Corolla once again intended to maintain its leadership position in the small car segment, and to give competitor models a run for their money.

All units were four-door, five-seat, four-cylinder powered and front-wheel drive. Notably, this generation of Corolla debuted a powerful set of LED headlights more commonly found in higher-priced luxury cars. Their performance is excellent.

A proven 1.8L four-cylinder powered all models, though numerous tweaks and improvements were added to further improve efficiency and performance. Output was rated at 132 or 140 hp, depending on the model in question. The CE, high-value LE and sporty S trim levels get the 132 hp variant of this engine, while the available Corolla ECO sees the powerplant running a higher compression ratio and Toyota’s new Valvematic technology for 140 hp, alongside higher efficiency.

Most used models will run Toyota’s continuously variable transmission (CVT), which functions like a regular automatic, though a six-speed manual was available on more basic models. Trim grades included the basic CE, the value-bundled LE, the upscale SE, and feature-rich XSE, as well as the enhanced-performance LE ECO.

Fuel economy, an upscale cabin with plenty of space, generous rear-seat legroom, and a smooth and refined steering feel were highly rated by owners. The potent LED headlamps are a nearly universal favourite, giving drivers access to a high-performance lighting system in an affordable car. Rough road ride quality and a smooth powertrain round out common praise-points from owners.

Some owners wish for a quicker steering system calibration while parking, and a little more power under the hood. Though the engine hits the mark for smoothness, mileage, and refinement, it doesn’t serve up quite as much punch as some owners like.

Note that for model year 2017, Corolla received several updates and tweaks – including new safety features, a revised interior with a new instrument cluster, a new exterior appearance with updated fasciae and wheels, and revised packaging of equipment and trim grade contents for improved value.

Toyota has a reputation for building some of the most reliable vehicles on the road. Just remember that the way the vehicle you’re considering was treated and maintained by past owners has a greater impact on long-term reliability than the badge on its hood.

Poor maintenance and unfavourable owner habits can cause issues with even the most reliable cars, so protect yourself by taking steps to ensure the Corolla you’re considering has been consistently and properly cared for. Seek all service records, obtain proof that no maintenance or fluid changes have been skipped or stretched, and have a mechanic assess the vehicle before your purchase for maximum peace of mind.

A handful of owners have reported problems with the CVT transmission in this generation of Corolla, though the number of complaints versus total units sold seems insignificant. Here’s a discussion thread with some interesting opinions from various owners, most of whom reported no problems.

Note that the Corolla’s transmission fluid is considered “Fill for Life”, meaning that in normal driving, it never requires a fluid change. Still, the warranty manual suggests that the transmission should be inspected professionally every few years for signs of fluid leakage.

Two notes here. First, remember that while the fluid in the CVT transmission fluid doesn’t require changing in normal driving, “severe” use requires changing the fluid on occasion. Most Canadians should follow the “severe” fluid change schedule for all components, including the transmission, as most Canadians operate their vehicles in a wide range of temperatures, including extreme cold. Change the transmission fluid every 100,000 km at most, for maximum peace of mind.

Second, have that fluid changed exclusively by a dealer technician, to eliminate any chance of damage or issues caused by improper fluid use, or improper draining or filling of the fluid.

Get the Software Update

If the Corolla you’re considering seems to have trouble holding a steady idle while in gear and stopped, or if the powertrain seems clumsy, inconsistent, or “lost” when coming to a stop or accelerating out of a light, a quick software update may be the fix. This issue could also be evidenced by the presence of a Check Engine Light (CEL).

Toyota released this notice to owners of some Corolla models, advising that bad software in the powertrain computer may be negatively affecting the operation of a component within the transmission. The fix is to have the dealer install updated software to the vehicle’s computer. Ask a dealer to check the VIN number of the Corolla you’re considering against any available transmission-related software updates. Note that consent from the vehicle’s current owner may be required if you request this information before buying the vehicle.

Link your phone via Bluetooth to the Bluetooth system in the Corolla you’re considering for purchase. If the connection takes more than a few seconds to establish itself, the fix may be a very simple one: simply go into the settings menu and delete all formerly connected Bluetooth devices, for instance, phones paired to the system by previous owners. This may help speed the connection process.

Many owners of numerous new vehicles believe that today’s automotive paint just isn’t made the way it used to be – which is why we’d recommend carefully inspecting the paint on the Corolla you’re considering, and planning to have any major chips or scratches sealed or repaired, to prevent premature rusting. Here’s some more reading from one owner who experienced rust on a fairly new Corolla, which had started as a rock chip.

The gist? Fixing a chip is less of a hassle than fixing a rust spot that can form easily beneath it if action isn’t taken. Inspect the used Corolla’s wheels, too, as some owners have reported peeling paint finishes very early on in the life of certain wheel styles. Depending on the age and mileage of the vehicle you’re considering, this may be covered by remaining warranty coverage.

Some owners have reported unwelcome clicks and rattles, usually from the dashboard area and at specific temperatures. These rattles may manifest at random, and it seems that they can be tricky to fix. Some owners have had luck wedging small foam slabs in between the dash and windscreen, or between the dash and A-pillar trim to either lower edge of the windscreen. In some cases, applying thicker rubber stops to the area where the glovebox door rests against the dash panel, too.

If you’ll perform your own maintenance on your new-to-you Corolla, be sure to use original parts sourced at your Toyota dealer where possible. In this case, one owner wasted time and money installing non-factory spark plugs, only to be met with poor performance, a rough idle, and a warning message from his computer. The problem? The Corolla’s engine doesn’t like non-factory spark plugs. Solution? Install factory spark plugs only or leave this job to a dealer.

Have a good look at each of Corolla’s tires before you buy. In addition to confirming that there’s plenty of tread remaining and that the seller isn’t trying to pass off a worn set of tires, a visual inspection may reveal signs of a bad alignment, evidenced as uneven wear across the width of the tire treads, or excessive wear on the inner or outer corner of the tread, where it meets the sidewall. If either is present, have a technician investigate. Running a vehicle with poor alignment costs you money in various ways.

Be sure to spend some portion of your test drive on the roughest road possible, as rough roads can coax unwanted sounds out of worn suspension components beneath the car. Note that any slamming, popping or rattling from the underside of the Corolla typically indicates that the vehicle needs attention to one or more of its suspension components, which you’ll want to address before your purchase.

Turns out that numerous owners have modified their Corollas for added looks, style, and performance. The average shopper is best to avoid a model that’s using any non-factory parts or equipment, as these can adversely affect reliability and may even void any remaining warranty coverage.

If you find a good deal on a healthy-looking Corolla that doesn’t have any service records or history available, spring for a general tune-up just after your purchase for maximum peace of mind. Have a technician complete an oil change, transmission fluid change, coolant flush and fill, and have them inspect the cabin air filter, engine air filter, battery terminals, and brakes. A little TLC can go a long way towards reliable long-term operation.

There are just two recalls to report for this generation of Toyota Corolla. Be sure to have any applicable work performed as soon as possible.

As it has for generations, the Toyota Corolla looks like one of the safest used car bets in the compact car marketplace. Major problems are reported too rarely to warrant much concern, and more commonly reported problems are minor in nature. A healthy used Corolla from this generation should turn in years of worry-free transportation. 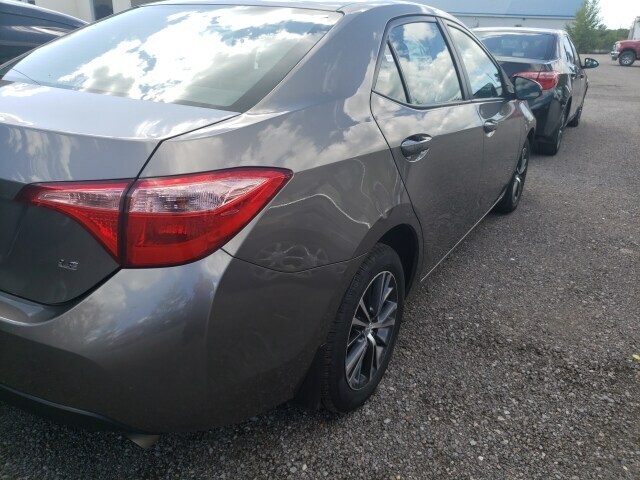