Perhaps the greatest appeal in any plug-in electric vehicle is that first stretch of pure electric driving before the gas engine kicks in and you get to coast along in near silence, the instantaneous torque wafting you up to speed with a whirr of spinning motors, and the smug satisfaction that you get free charging at the office or your local community centre. Okay, maybe you genuinely appreciate the lack of emissions keeping the air clean (or at least not contributing to the smog), doing your part for the world you plan to leave behind for the little ones strapped into their child seats in back.

Quiet, exceptionally smooth, with great thrust off the line and at low speeds.

In the 2018 Mercedes-Benz GLC 350e, you can expect up to about 20 km of that satisfying cruising before the 8.7 kWh lithium-ion battery pack is drained and the gas engine clunks to life and spews its boost of power and torque and emissions into the mix. The battery can be replenished by spending two hours plugged into a 240-volt energy source, or over four hours in a regular household outlet. That 20 km of electric motoring is a revelation, however, and I dare say it’s the fact that Mercedes would not sacrifice performance that leads to such a modest electric range.

The 85 kW electric motor yields 251 lb-ft of torque with immediate results, and 114 horsepower keeps the GLC going well up to highway speeds. However, if you do keep it at a steady highway cruise, the power demands of high speed and lack of brake regeneration will cut that range down drastically, so full electric operation is best reserved for stop-and-go traffic or city streets, where you’ll get the full dose of range and reduce emissions in the areas that most need it.

Conveniently, Mercedes has you covered with the ability to choose pure EV mode, pure gas engine mode, or hybrid mode, which will use either power source individually or any combination of the two to yield the best fuel consumption. This means that if you’re planning a short run around the city, you can probably get away with the full trip on battery power. If you have a long highway drive, then urban congestion to deal with, you might want to save the electric juice so that you don’t contribute to smoggy urban cores. But if outright efficiency is your goal, just stick with hybrid mode and you might get as good as the NRCan estimates of 9.8 L/100 km in city driving, 8.6 on the highway, and as little as 9.3 combined.

We went for maximum electric operation and with regular charging sources in our community and heavy traffic on the commute, we managed 204 km of pure EV driving out of a total of 541 km travelled during our week with the GLC 350e, which works out to 8.1 L/100 km. It’s worth noting that the GLC 350e’s electric motor has a fairly high draw, NRCan estimating it uses 36.6 kWh/100 km, which is typical in the luxury segment, while smaller, more efficient plug-ins like the Prius Prime, Chevy Volt, and Hyundai Ioniq use less than 20 kWh/100 km.

Then again, if you’re looking at the GLC 350e, you’re probably more likely to compare it to the other GLCs in Mercedes’ lineup or a direct rival like the Volvo XC60 T8. Not surprisingly, the GLC 350e is the most-efficient GLC in the showroom, beating the GLC 300’s 11.1/8.6/10.0 ratings by a fair margin while delivering better horsepower, torque, and acceleration. Before we get into how much you pay for that superiority, let’s get back to how it drives.

Under battery power, the GLC 350e lives up to that dream of electric motoring: quiet, exceptionally smooth, with great thrust off the line and at low speeds. On city streets, it has decent mid-range punch, but on the highway it doesn’t quite have enough juice to make further acceleration immediate. With so little electric range, however, the gas engine is a frequent contributor, and unfortunately, it is incredibly disruptive to that smooth Mercedes driving experience.

In hybrid mode, the car often shuts down at intersections, and the electric motor will get it rolling, but the start-up of the 2.0L turbo-four gas engine is a bit rough, leading to an uncouth, halting jerkiness as the power sources combine, and even when coasting and then accelerating, the reintegration of engine power is coarse and noticeable. Getting stuck in stop-and-go rush hour or slow, crawling traffic and it’s a constant aggravation if you’ve run out of electrons to run in pure EV mode.

The GLC 350e still features Mercedes’ full range of driving modes, from Eco up to Sport+, but in Sport and Sport+ mode, while response is sharper it exacerbates the jerkiness even more, with the seven-speed automatic also slamming between gears with gusto – this behaviour is appreciated in something like the AMG GLC 43, but here it’s just gratuitous.

While it’s a bit rough playing with the electric power source, Mercedes’s 2.0L turbo is dialled down to 208 hp and 258 lb-ft of torque in this application (compared to 241 hp and 273 lb-ft in the GLC 300), so those brief hiccups are a small price to pay to reach 315 horsepower and 413 lb-ft of torque combined. With both electric and gas power in play, the GLC 350 accelerates quickly, reaching 100 km/h in 5.9 seconds, a half-second faster than the GLC 300, but a full second slower than the Mercedes-AMG GLC 43. The electric motor also provides a good “EQ boost” function to give it quite a kick of acceleration even at higher speeds.

While it is fast, it’s not intended to be a sporty AMG model, so you would expect the focus to be squarely on comfort, forgoing some handling prowess for a serene, settled ride. As far as handling goes, the standard multilink suspension keeps body roll in check and provides competent handling for those content to trundle along with the flow of traffic. Trying to push it in corners and the comfort-first tires let you know that is not its mission, even if it’s the only GLC with 50/50 weight distribution.

The GLC 350e is buttoned-down on the highway, with firm, steady steering that isn’t so heavy it becomes cumbersome when parking and maneuvering in tight parking lots. While the GLC 350e absorbs minor rough patches without getting too out of sorts, it unfortunately struggles to handle the added 210 kg (2,025 kg GLC 350e up from 1,815 kg GLC 300) of the hybrid gear and particularly the battery pack, which is nestled under the rear trunk, and some rough impacts resulted in distinctly un-luxurious clunks and jiggles.

Luxury appointments, with options to spare

The battery pack also impinges on cargo capacity, the trunk floor noticeably raised, so the GLC’s 550 L of trunk space and maximum 1,600 L with seats folded shrink to 395 L and 1,445 L respectively in the 350e. The 350e does still feature 40/20/40-split folding rear seats, and a flat load floor, with the back of the trunk floor covering a compartment for tidily stowing a portable charging cable.

When it comes to human cargo, there are no compromises and the rear seats are spacious enough for two with a third being squeezed for legroom by the vent console and driveline tunnel. Front seats are, of course, far more luxurious, with ample support, good bolstering without being restrictive, and power adjustable to get an ideal position for short and tall drivers. However, our tester, while equipped with a variety of equipment packages, retained the basic Artico synthetic leather, of which I am not a fan as it is far too rubbery a texture – it might make cleaning up easier, but it’s not a pleasant material to the touch.

While our model skipped the leather, it did have the open-pore ash wood trim, which is distinctly luxurious, especially when combined with the perforated metal speaker covers of the Burmester audio upgrade. With the seat adjustments and memory buttons on the door on the backdrop of this wood treatment, it’s an artful little touch in an aesthetically pleasing interior. Unlike the synthetic leather on the seats, the genuine leather hides on the steering wheel are delightful, perforated on the thick, contoured sides for an ideal grip.

I’ve become accustomed to Mercedes’ COMAND infotainment system, so I appreciate the logic of the main menus, quick response time, and crystal-clear graphics, but some features that I would use regularly are buried in a menu that resets every time: a list of satellite radio stations with current song playing. Every time you pick a station, you get bounced back to the main screen, have to toggle down, scroll down, then you start at the top of the station list all over again, even if you’re currently listening a station the 30s, 60s, or heaven forbid anything higher. Thankfully, the screen in the gauge cluster can bring up the station list and you can scroll through stations or contacts quickly that way. And while we’re nitpicking, the fact that the handwriting recognition only accepts numbers to dial directly instead of the letters of contact names is mind-boggling and turns a neat feature into an almost useless gimmick.

Pure electric operation at what price?

For the grand finale of our complaints, let’s talk price. The GLC sounds like it’s reasonably priced starting at $45,900, but tack on $2,075 for destination charges (though it can vary from store to store) and another thousand if you want any colour other than black or white and another couple thousand to escape that creepy synthetic leather and we’re already into the $50s and haven’t even added navigation, proximity keyless entry, power tailgate, never mind driving aids like 360-degree parking cameras and sensors, adaptive cruise, and lane keep assist.

The GLC 350e starts at $59,900 and all those features are still options, so as equipped, the GLC 350e we drove ran up to $73,540, and still didn’t have adaptive cruise, leather, cooled seats, or a head-up display. I just don’t see how 20 km of electric range and modest savings in fuel consumption justify the $14,000 premium. 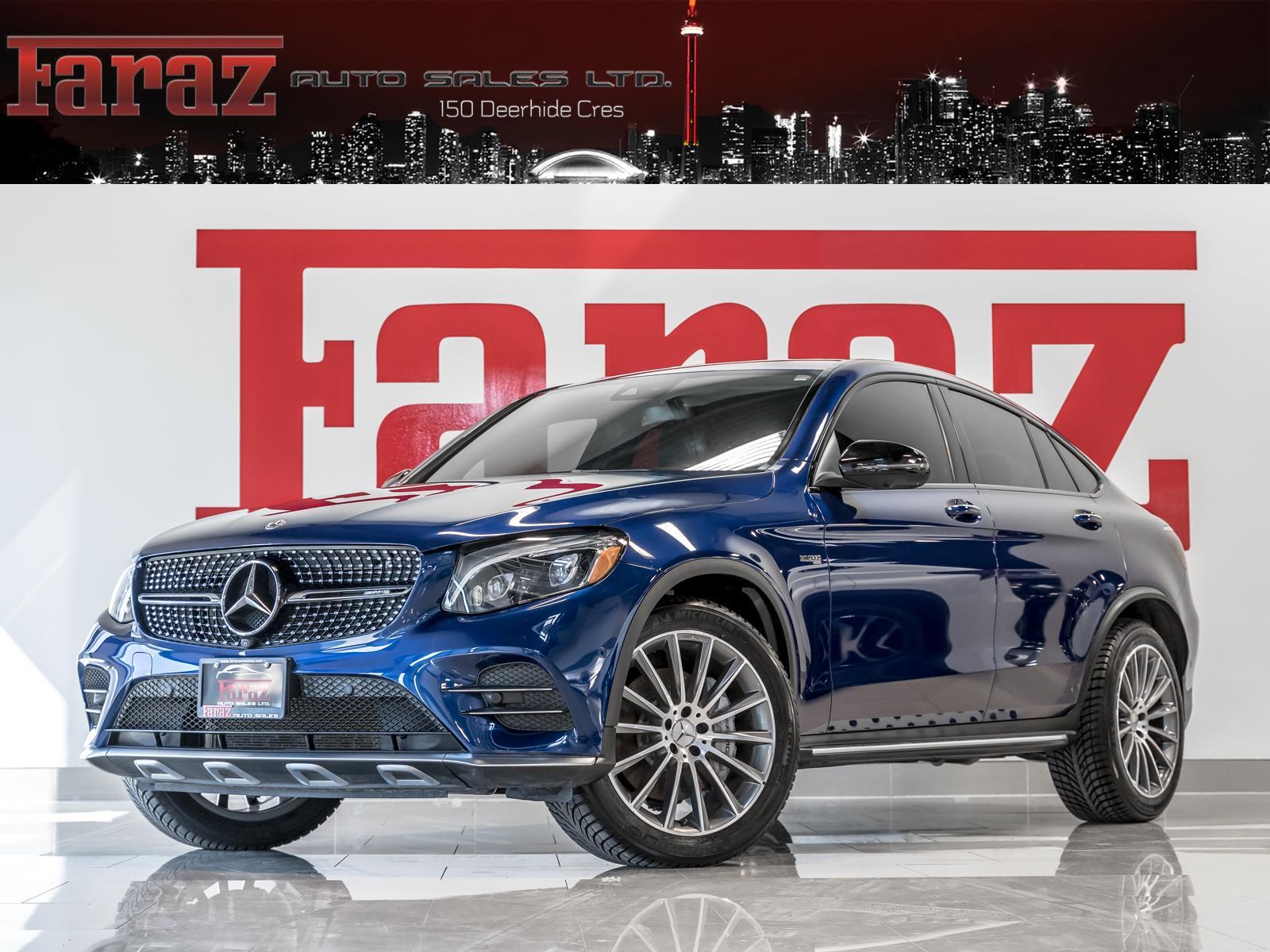 Take a look at the GLC 350e’s one true competitor, and you’ll find that it’s not so far-fetched, although Volvo’s $72K starting price for the XC60 T8 R-Design comes better equipped than this well-optioned GLC 350e. If you don’t mind giving up pure electric operation on some drives, Lexus’s NX300h actually achieves better fuel consumption overall (7.2/7.9/7.5 L/100 km city/hwy/comb) without having to worry about plugging in wherever you go, and it comes fully loaded at $65K.

At the very least, the 2018 Mercedes-Benz GLC 350e has got me very excited for the company’s upcoming EQ C electric vehicle with its smooth, powerful electric operation. However, this plug-in hybrid doesn’t live up to the refinement I expect from the Mercedes brand, doesn’t deliver as much range or have as many features as I’d hope for considering its price, and makes the more affordable GLC 300 (with no practicality compromises) seem that much more appealing by comparison.

About Jonathan Yarkony
Jonathan Yarkony is the former Senior Editor for Autos.ca and autoTRADER.ca, AJAC member, a Brampton-based automotive writer with years of experience evaluating cars and installing child car seats.
Follow me
You may also like
6.9