In the endless parade of Porsche variants, there is a 911 for any taste. From signature base Carrera to world-beating GT2 RS supercar, there are far more than just 50 shades of greatness, with everything from stylish all-wheel-drive Targas and sporty, fun-loving convertibles to varying degrees of track-oriented focus and dedication.

Is it good enough to be the 911 that people want?

The aforementioned GT2 RS is pretty much in another dimension in price and capability, while the GT3 still offers more capability than most drivers can truly exploit – it will make anyone feel like a hero without the scariness of the GT2, though its price creeps closer to $200K every time we check. The 911 GTS starts at under $140K, and the Carrera S at $120K, but Porsche heard the cries of its fans (and internet commenters) clamouring for a more affordable 911 model that puts the focus on performance and driving purity rather than tech and luxury.

The 2018 Porsche 911 Carrera T takes the most basic 911 and pulls a variety of tricks to reduce weight and increase performance and driving pleasure. Some might think that Porsche is merely cashing in on the lust for its special editions, and giving it a distinctive trim level certainly helps make it a strong business case by conferring a certain amount of desire for its exclusivity.

But really, who cares? The Carrera T gets levelled up with a handful of features and options that are aimed at getting the most out of the base 370 hp twin-turbo 3.0L flat-six, which is more than enough engine for 99 percent of drivers.

The Carrera T’s mission starts with lower weight, ditching some sound insulation, replacing rear windows with lightweight glass, and dropping door handles in favour of pull straps. The next step is a lower sport suspension (by 10 mm), locking rear diff, and a couple of options previously only available on the pricier models: rear-axle steering and carbon-fibre sport seat with rear seat delete.

In manual transmission cars, a shortened shifter is connected to the seven-speed gearbox with shorter ratios, helping it knock 0.1 seconds off the run to 100 km/h at 4.5 seconds. Opt for the PDK and it’s even quicker – 4.2 seconds – but it’s a pricy option, adding $4,250 to the Carrera T’s $116,500 starting price.

But never mind acceleration times – manual, rear-wheel-drive Porsche 911s obviously aren’t gunning for drag-strip supremacy, and the Carrera T in particular eschews overwhelming speed for the driving experience and reconnecting man and machine. Jacob had a chance to sample the 911 T on the track, and confirms that “it is still more Porsche than most will ever need.” But is it good enough to be the 911 that people want?

Porsche brought us to see a different side of the Carrera T, one it is much more likely to experience: winding backroads between a couple cities, in this case, a route that took us from Ottawa to Montreal via Mont Tremblant.

We started off in a PDK-equipped model, and it was just the thing for that city-to-country leg, the transmission doing its own thing as we cruised through downtown Ottawa and appreciated the gothic revival architecture of our nation’s Parliament buildings. However, to be honest, the 911 coupe is not a great option for sightseeing as visibility is restricted due to the thick rear pillars, low roof, and small rear window – a Targa or Cabrio would be the 911 body style for those that love to admire the scenery. The Coupe, and this 911 T, is singularly focussed on the winding ribbon of road and curves ahead, so even checking blind spots in city traffic requires extra care.

As we got on the highway and needed a bit of jump to get ahead of some big trucks before being pinched off by lane reductions, a quick tap-tap of the left paddle shifter got us into the heart of the power band for easy overtaking. The 3.0L flat-six makes its peak 370 hp at 6,500 rpm, but in casual driving, the 331 lb-ft of torque are available from 1,700 to 5,000 rpm, making acceleration in casual driving effortless.

Twist the dial for Sport mode – conveniently placed on the steering wheel – and the barking exhaust note is unleashed along with more instant throttle response and acceleration. Curiously, Sport+ mode dials the exhaust back down, but everything else is at its sharpest, the PDK transmission just eagerly awaiting any stab at the brakes for a quick downshift to keep the engine singing its raspy flat-six wail.

Although the suspension offers a firmer setting in the Sport modes, it barely registers considering the default setting is already so aggressive. While the dampers take the sting out of sharp impacts, rough pavement equals a rough ride, a fitting baseline for this sports car. The firm suspension and tight, body-hugging seats provide the necessary foundation on which you can build a rhythm when you finally get to the roads you crave.

You won’t feel the rear-wheel steering, but it’s back there, the smallest bit of angle helping to guide the car even more perfectly through every corner. The steering is sharp without being darty, with enough weight to ensure you don’t dial in any unwanted inputs, and the chassis and firm seats feed back anything lacking in the steering feel. Likewise, the brakes are more than enough to pull the Carrera T’s 1,438 kg down from speed, with sharp response from the first feathery touch and consistently more bite and good feel as you load the front tires for turn-in.

And if feel is what you’re aiming for, the manual transmission provides two more points of connection with the mechanical symphony going on beneath the metal. The clutch is firm without being tedious, and it engages in a split second when you hit the bite point demanding your attention at all times. When you slip up, the auto stop-start doubles as a stall saver – just push the clutch back in and it restarts, and it even has hill holder to take some of the stress out of that first battle with inertia, especially on inclines in ski country as we saw around Mont Tremblant, or in congestion on the final leg into Montreal.

With less sound insulation, you hear the mechanical bite of the clutches and differentials that little bit better, reinforcing what’s coming through the pedal and shifter; the sounds giving you the sense that you are driving and not simply being transported at incredible speeds by a machine that is superhumanly capable. 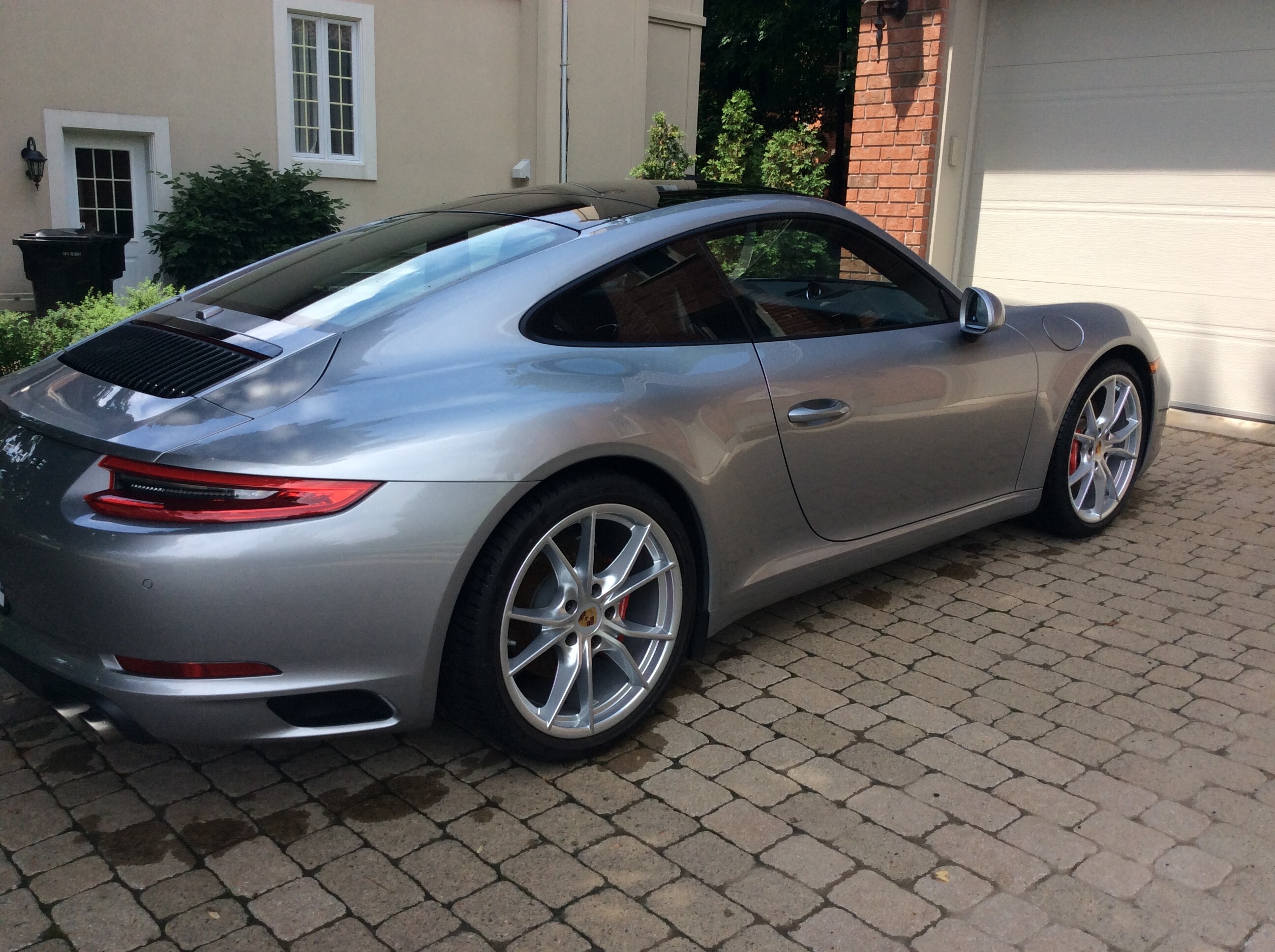 However, one assist that the Carrera T offers oversteps, in my opinion: the rev-matching system on manual cars, which zings the engine up to the perfect rpms when downshifting into a corner, spoon-feeding drivers instead of sticking with the purist mission it espouses.

Still, while I longed for the challenge of needing to heel–toe on our rip down from Tremblant, the rev-matching system worked flawlessly, which did result in a smoother, more fluid drive winding through the Laurentians. While some might favour the racetrack and others the tight switchbacks of canyons and mountain passes, the gradual ribbons of asphalt winding gently through thick forests and lakes is my driver’s paradise, the stress turned down to zero and a zen mindlessness taking over, being the steering, being the car, being the road.

The Carrera T doesn’t do anything earth-shattering, rather it removes the obstacles that separate you from the driving experience, both filling you with the sounds and feedback of its archetypal sports car abilities, and emptying your mind of the crush of demands in life.

Well, at least until you catch up to slower traffic and are reminded of the hell that is other people, especially other people who are slow drivers. However, credit where credit is due, the Quebec drivers we caught up to unfailingly found the nearest safe sections to pull over and allow the fast-moving yellow 911 filling their mirrors to pass, and for that they deserve thanks and appreciation.

Carving out a niche

While the 991 generation introduced a far more civil grand-touring experience in the 911, even the most basic 911 is a legitimate sports car through and through, with acceleration, handling and braking that will dazzle and amaze anyone who loves to drive. And for the small audience of 911 buyers who want the purity of driving experience and performance-focussed options but don’t quite have the means or desire to move up to a GT3 or GTS, the Carrera T fills the void with a few choice options and weight savings.

Although it does provide something special for that small slice of the market, and our route was the ideal touring environment in which to demonstrate its mission, it’s hard to see it as anything more than a placeholder until that buyer can afford – or justify – a new GT3, especially since the GT3 can now be ordered with a manual transmission itself.

For the legions of Porsche fans who have long proclaimed that a manual transmission, rear-wheel-drive 911 with performance options is more than enough for any mortal – but who aren’t shopping for $100K cars – they can only hope that there are enough buyers to flood the market with Carrera Ts in a few years’ time, at a price they can afford.

About Jonathan Yarkony
Jonathan Yarkony is the former Senior Editor for Autos.ca and autoTRADER.ca, AJAC member, a Brampton-based automotive writer with years of experience evaluating cars and installing child car seats.
Follow me
You may also like
AdChoices
Latest Articles
﻿