A charming mashup of about one part M3 and two parts X3.

There’s a little button next to the shifter, with Adaptive, Eco Pro, Comfort, and Sport modes indicated. Tap to toggle, and the X3 M40i changes things up, morphing into whatever sort of machine you’d like to drive at any given moment. Suspension, steering, throttle, and other systems can all be customized on the fly with a click.

With adaptable drive-mode technology like this applied to much of BMW’s product lineup, you can have whatever you like these days. Anything.

After all, BMW’s clearly set on cooking up something for virtually every shopper whim in the luxury marketplace. This includes four-door coupes, coupe-like wagons, V12-powered rocket-lounges, and missile-propelled SUVs. Each comes with a drive-mode selector, like the X3 M40i’s, for further fine-tuning.

Buying and driving a modern BMW is like going to Subway for lunch: the selection and customizability are daunting. Want a ham and swiss, but with cheddar? A non-toasted toasted tuna panini? Extra pickles and a pint of mayo on your double steak wrap? Or that steak wrap served on a bun? Six inches, or footlong? You can have whatever you like, however you like, with whatever you want sprinkled on top.

And now, this “have it your way” ideology may manifest on the mental radar of shoppers who are after the just-right sizing and sensible goodness of the popular BMW X3, combined with a going-over by the brand’s M-division folks – who you may recognize from such other machinery as the raucous M3, fire-breathing M5, and the like.

The result is the new BMW X3 M40i, which is a celebration on wheels. Not only does this machine celebrate the launch of an all-new generation of X3 for model year 2018, but also celebrates the first time that the little M badge has made its way onto an X3’s tailgate and fenders (and door sills, console, steering wheel, and elsewhere).

A foundation of luxury and high technology

Consider this a hot-rod version of the brand’s hot-selling luxury crossover, er, Sports Activity Vehicle. Or a charming mashup of about one part M3 and two parts X3.

The X3 M40i is not an all-out, all-conquering performance weapon like many of the full-blown M models with which it shares the little M badge. Instead, X3 M40i applies a layer of that M magic to a totally daily-driveable and well-reviewed machine, in a configuration that caters to family use, all-weather use, and an extra dollop of performance hot sauce intended to make it friendly but also very thrilling to drive.

Highway cruise in order? I spent six continuous hours in the M40i one afternoon, cruising at a good clip in Comfort mode. Here, the ride is firmly comfy – lenient but not gelatinous, stiff-ish, but nowhere near jarring. Those arriving from a semi-sporty luxury sedan will feel right at home.

The steering is lightened: lazier than in sportier modes, though it still delivers that signature BMW locked-on heaviness that imparts directional confidence and minimizes the need to constantly tweak the vehicle’s position between the lines. Noise levels are kept nicely muted.

There was no shouting required to converse with my passenger, with whom I shared plenty of room, charging provisions for multiple smartphones, a deep centre console for keeping smaller items out of sight, and two proper cupholders located perfectly for our bubble teas.

Have you tried bubble tea? It’s like tea, only cold, and partially filled with questionable little balls of jelly that reverse pea-shooter your throat if you suck too hard on the straw. We also had two lengthy Ikea shelves in tow.

The driving position is commanding but not towering, and getting in and out requires little more than a lateral bum-slide and mini-plop downwards into your seat.

If you want to spend a contented day on the highway enjoying a conversation and consuming some questionable but delicious beverages, X3 M40i has you covered. It’s a rocket of a ute, but not at the expense of civility.

That’s all taken in from a cabin that embodies a lustrous blend of high tech and traditional luxury. On one hand, miles of stitching, creamy brown leather, embossed aluminum accenting, and massive attention to detail instantly generate the rich and upscale feel expected by the shopper.

On the other hand, screens.

The entire instrument cluster is a giant digital display that’s clean, vivid, and beautifully styled and animated. A widescreen infotainment display sprouts from the dash. A thin LCD display is used for the climate controls beneath. So, the new X3’s new cabin maintains core BMW posh-factor in full, while pulling in a slew of high-tech touches typically found higher up BMW’s model range.

Also, the cargo hold is basically perfect. It’s wide to the edges, largely square, fitted with storage cubbies at the rear corners to keep smaller items in place, and offers a load-in height that conveniently lands just a smidge higher than your knees, for easy loading and unloading of groceries, gear, and canines. A strut-mounted false floor can be fixed into a lifted position, and stays in place for access to concealed storage beneath.

A drivetrain to suit any whim

Drive gently in Comfort mode, and the engine and transmission conspire to keep the revs down via invisibly smooth and early upshifts, the turbo creating massive low-end torque that renders downshifting all but obsolete. You’re up to eighth gear by about 70 km/h, highway revs are low, and reasonable fuel mileage means the better part of a full day’s cruising can pass without refueling.

Drivers may also use the included Eco Pro mode to further desensitize the driveline, making it easier to save fuel by capitalizing on the engine’s big low-end torque to keep revs to bare-minimum levels, adding miles to every tank.

Fun fact: turbocharged, direct-injected engines like the M40i’s provide the most bang for your fuel buck at low revs where the engine is nearly lugging. Here, the engine is extracting the most energy possible from its fuel, and Eco Pro mode makes it easy to operate in this range in virtual perpetuity if you aren’t in a rush.

But the really impressive stuff happens in Sport mode, even more so in the Sport Plus sub-setting. Click this into action, and it feels like someone fed the M40i a case of Red Bull and jammed a taser into its sheetmetal rump. 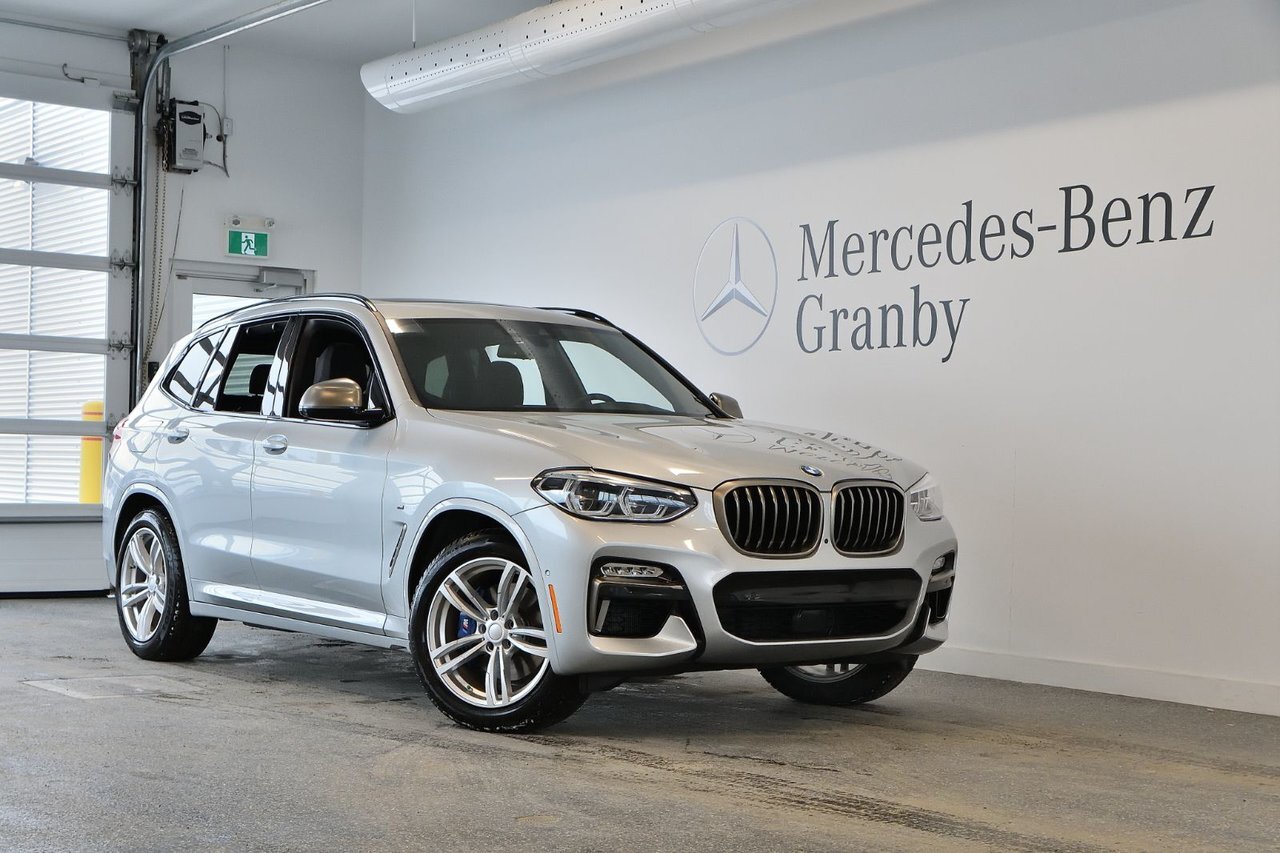 Power comes from a 3.0-litre straight-six – turbocharged, of course. At startup, an attention-grabbing hum zings from the exhaust, declaring ignition to anyone nearby. Shortly after, it settles into a deeply humming idle. At your perpetual disposal are 355 horsepower and nearly 370 lb-ft of torque, dispensed across a wide rev range.

A new charge cooling system integrated within the intake manifold means the turbocharger spends less time pressurizing a half-mile of intercooler plumbing, and more time pressurizing the cylinders. I can confirm, in no uncertain terms, that the unleashed X3 M40i accelerates as if rear-ended by a speeding school bus at full throttle, and that this acceleration will please even those shoppers arriving from smaller, big-power sport coupe models.

In fact, engineering witchcraft of some form or another has enabled a 0–60 mph time in a claimed 4.8 seconds, matching the 400 horsepower (and $26,000 pricier) Porsche Macan Turbo.

Use the sportier modes, and the M40i’s exhaust is louder – the modest hum replaced by a roaring blurt. The throttle and transmission go hair-trigger: even a slight touch on the throttle summons numerous downshifts and a mighty leap ahead. Touch the brakes or round a corner, and there’s more downshifting: the programming keeps full thrust at striking distance at all times, ensuring instant access to everything the silky boosted straight-six has to offer.

And the noise! Picture a smooth, semi-exotic roar that soaks nicely into the cabin and climbs melodiously with the revs. Get the upshifts right (or lift the throttle abruptly at high revs), and the M40i leaves a delightful “pop-pop-poppity-pop” in its wake. If you’re blessed, you can even get to outright backfire on occasion – BANG! – which is your reward for being a good exhaust-noise conductor.

And there’s so much torque, everywhere, that a pleasing ramp up in acceleration meets every further press downward on the throttle, no matter how deeply you’re already into it. This powerplant is an absolute class act.

Further, the suspension firms massively, rendering the ride a moment ago, in Comfort mode, all but unrecognizable. Ditto the steering, which is now hard, heavy, bolted down, and faster. You’ll likely want to use the paddle shifters here, and when you do, it’s nothing but instant, lightning-fast, and perfectly executed shifts in the direction of your choice, with giggle-eliciting urgency.

Sure – it’s a utility vehicle more than a sports car, but only just. In sport mode with a little lead in your boot, the X3 M40i puts on a hell of a show. Engineers even re-jiggered the AWD system to send more power rearward, meaning that enthusiast drivers can push the thing around bends via the throttle, where they’re met with a delightfully squirmy mini-drift, not understeer.

A creature of broad appeal

Other notes? The head-up display is colourful, massive, and vivid, adding a high-tech touch that’s easy to appreciate. It even displays upcoming turns and street names when the navigation system is active. And, in typical BMW fashion, the headlights are top-notch where spread, reach, colour, and total saturation of the road ahead with crisp white light is concerned.

Finally, the brakes are as expected from a sporty BMW: precise, easy to modulate, and with a strong bite from an initial pedal press – even if this isn’t the most impressive take on the signature BMW brake feel.

Gripes? The ride on poorly maintained in-town roads can degrade towards moderate harshness, and the gorgeous head-up display partially disappears if you’re wearing polarized driving glasses, which you should be.

Finally, the instrument cluster screen smudges visibly if you even look at it the wrong way, and heaven help you if you sneeze on it. Trying to clean it makes it even worse.

So, here’s a rorty-snorty little powerhouse of a luxury crossover that’s anything you want it to be. Comfortable enough for a road trip? Check. Hilariously quick, frisky, and eager to chew up winding roads? Check. As fast as a far-pricier Porsche Macan Turbo? Check. Capable of exhaust sound effects that make teenagers swear? Yes, that too.

With an as-tested price coming in just north of $77,000 (including about $13,000 in options) the X3 M40i isn’t for everyone – but those after one of the most entertaining-to-drive sports utes anywhere near its price point should definitely give it a whirl. Perhaps alongside the equally priced and even-quicker Jeep Grand Cherokee SRT8, which knows a thing or two about sound effects, too.