SPARTANBURG, South Carolina – Given the complexity of our route down Mount Pisgah, our speed was probably a lot more modest than it felt from behind the wheel. But the satisfaction lies not in how quickly you reach the destination, but in how much you derive from the journey.

Surprisingly engaging and feels much lighter than it looks.

A lumbering SUV wouldn’t be my first choice of vehicle to tackle this narrow, heavily forested road that doubled back upon itself in an abundance of narrow hairpins. But to its credit, the 2019 BMW X4 I’m piloting manages to wend its way ’round the switchbacks with commendable grace – thanks in no small part to its optional adaptive suspension.

Built right here in Spartanburg, a verdant “upcountry” town in the foothills of the Appalachian Mountains, the X4 first arrived in 2014 and is now in its second generation. It’s part of the once-puzzling, now-commonplace SAC (sports activity coupe) crossover subset established by BMW’s X6, recognizable for its raked but over-generous coupé proportions and sport-utility chassis.

Lest you think the public’s voracious appetite for crossovers must surely be sated by now, the numbers sold in Canada alone over the last decade have more than doubled, surpassing passenger car sales for the first time in history. The soon-to-arrive X7 brings BMW’s crossover portfolio to seven vehicles; and like rivals Mercedes-Benz and Audi, there’s a corresponding CUV for nearly every sedan in its lineup.

The worldwide demand for crossovers shows no sign of abating – though the current US/China trade war could seriously affect the export of luxury vehicles, particularly crossovers, into China. But for now, they’re outpacing sedans to the point where some automakers have given up manufacturing cars altogether in favour of the more lucrative utility vehicle.

Cruising the bucolic southern countryside, nicely insulated from any external unpleasantries, it’s easy to understand the appeal. The mid-size X4 may lack the voluminous interior space of the X6, but it’s comfortable, roomy and feels much lighter on its feet than its luxo-barge sibling.

Visually, it’s more “oversized coupe” than crossover, with a sporty character established by its raked roofline, wider stance, lower centre of gravity and larger haunches than its predecessor. Sculpted side lines and aluminum rocker trim help visually slenderize its deep side profile, and the rear end now appears wider and trimmer, thanks to new horizontal taillights and tidy, flat deck.

Up to 50 kg was shaved off the new car’s weight through strategic use of lightweight steel and aluminum, in body, chassis, and component construction. The streamlined body’s aerodynamic drag has been reduced by 10 percent to 0.30, with the addition of front apron air currents, active air control, and underbody cladding, while the familiar kidney grille has been enlarged by 30 percent to draw in more air. The slightly longer (54 mm) and wider (37 mm) wheelbase helps with ride comfort and stability while also providing slightly (27 mm) more rear legroom.

Most of our day was spent behind the wheel of an X4 xDrive30i with optional adaptive suspension and upholstered in a generous slathering of “Vernasca leather” – a $1,500 upgrade over the standard leatherette that comes in a variety of colours with contrasting stitching.

Infotainment is supplied via the 10.25-inch display using the iDrive interface, controlled by the familiar rotary iTouch controller knob, or through cloud-supported intelligent voice commands. You can also opt to use “gesture display”, tracing out your command on the controller knob’s surface.

Presumably these features grow more intuitive with time, since our efforts to have them guide us to a local covered bridge was an exercise in futility. Even the “points of interest” search came up blank – eventually we resorted to using my iPhone and Apple CarPlay, which directed us there with no issues.

The uber-comfortable seating features the contoured side bolstering of a sports sedan, but with the upright seating position favoured by the typical utility vehicle buyer. It’s a subdued, yet nicely executed environment, well isolated from any road or wind noise. The panoramic sunroof overhead contributed to the cabin’s sense of airy openness.

Cheaper mainstream crossovers have always understood the importance of cabin functionality, something that premium vehicles are finally starting to get. The X4 offers plenty of interior storage, from large door pockets, extra cupholders, and console stowage, to a handy cubby in front of the shifter that’s great for keys, phones, or road trip snacks.

Fold the 40/20/40-split rear seats down, and cargo space increases from 525 to 1,430 litres. That’s on par with most of its competitors, although the raked roofline does compromise cargo space and rear headroom somewhat. If space and utility are more important to you than sporty handling, there are better options out there for you.

Driver appeal on both road and track

The lowered centre of gravity, and 50/50 front-to-rear weight distribution makes the X4 very car-like, particularly while cornering. While it’s an exaggeration to say it’s comparable to any of BMW’s sports car offerings, the X4 is surprisingly engaging and feels much lighter than it looks. According to Steffen Koch, the X4’s Dynamics manager, the 55 mm steering ratio inspires confidence with less need for correction.

The wheel feels thick and grippy in the hands, and while I like the steering’s heft, my co-driver found it ponderous and would have preferred it a bit lighter. There’s a driver-selectable choice of Eco Pro, Comfort, and Sport modes to choose from, with an additional Sport Plus on the M models.

There’s a marked difference in character between the two models we’ll get in Canada: the X4 xDrive30i powered by a turbocharged inline-four producing 248 hp/258 lb-ft; and the X4 M40i with a twin-scroll, turbocharged inline-six generating 355 hp and 365 lb-ft of torque. The M variant not only sprints from zero to 100 km/h in 4.6 seconds (compared to the humbler xDrive30i’s 6.0 seconds), it does so with a barking flatulence that’s delightfully cheeky.

Swapping our xDrive30i for the more potent M40i, we drove several laps on BMW’s Spartanburg test track, pushing the car hard on the straights and cornering at high speed. It’s a vastly different beast than the more genteel xDrive30i, particularly in Sport Plus Mode with the exhaust popping and burbling on every downshift. While not much of a fan of sport-utility vehicles on-track, I have to admit the X4 was entertaining. 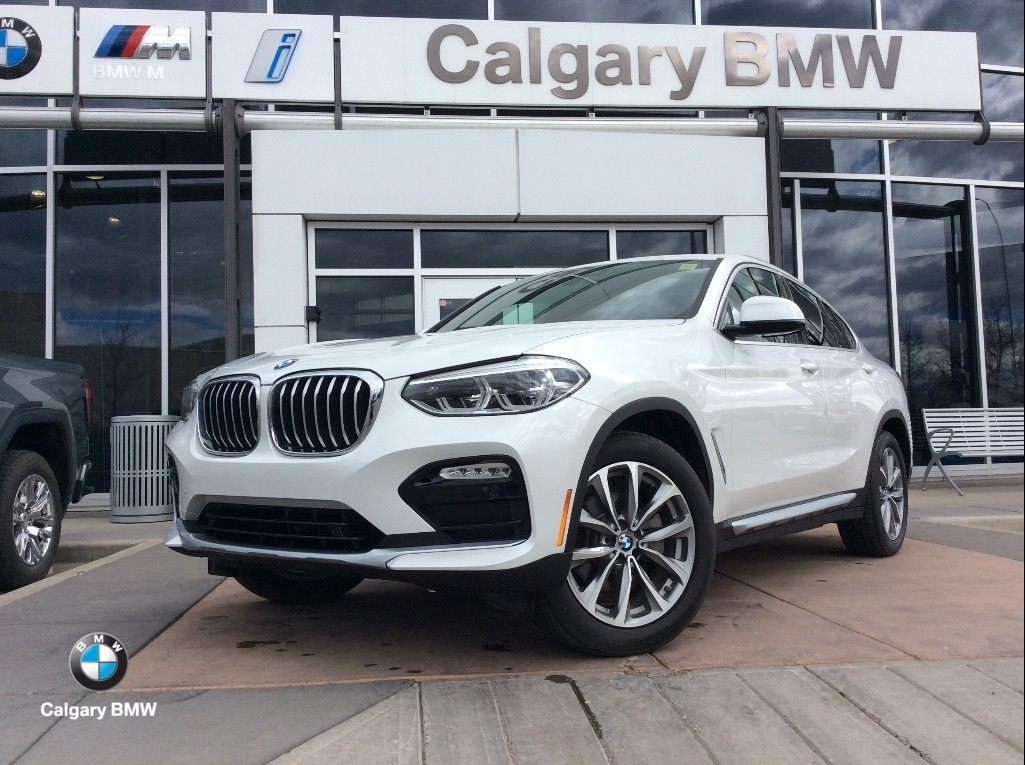 Turning the traction control nannies off freed up the car to rotate around the corners, the locking differential divvying up the torque and feathering the inside wheel just enough to keep us pointed in the right direction. The stability is confidence-inspiring – enough so that you feel comfortable getting on the gas right away. Maximum torque is available from 1,520–4,800 rpm, which is enough to propel its 1,961 kg forward almost immediately. Fortunately, the brakes do a great job of bringing it back down.

If you’re so inclined, the X4 is reportedly capable of acquitting itself well off-road, though we can’t really attest to that claim since we weren’t given the opportunity to head off into the trails. Ground clearance is an above average eight inches, which pales in comparison to the Range Rover Sport’s 11.3 with air suspension, or 8.7 inches for a regularly equipped Jeep Cherokee. Approach and departure angles are 25.7 and 22.6 degrees respectively, with a break-over angle of 19.4 degrees, and a fording depth of 19.6 inches.

Overall, if your inner soul is yearning for the Autobahn, but your daily requirements insist you be slightly more practical, you could do a lot worse than this engaging premium crossover.