“What I want,” the stereotypical customer says, “is Apple CarPlay, and emergency front braking, and heated seats, and lane departure warning, and a remote starter, and pushbutton start, and alloy wheels. And… say what? It’s going to be how much?”

And yes, I can really use “fun” and “twelve bucks under ten grand” in the same sentence.

And that’s the story behind my tester, the absolute base-base-base version of the 2018 Nissan Micra. It’s pretty much just an engine with wheels. You get a five-speed stick shift and no air conditioning, power locks, or cruise control. You even have to wind the windows up and down with a crank.

But it also rings in at $9,988. Twelve bucks shy of ten grand, and for a lot of drivers, money really matters. It just makes far more financial sense to pay less for a vehicle up front, than to wade into the horrifyingly-increasingly-popular 72- or even 84-month loans, where you potentially stay underwater even past the warranty expiration.

The Micra is currently the cheapest car in Canada, although it doesn’t hold that crown by much. It’s an extra seven dollars to get the starter-trim $9,995 Chevrolet Spark, a car that, in comparison to the Micra, leans harder on price than on decent driving performance to state its case.

Among rival subcompact stickers, the Mitsubishi Mirage comes closest at $10,998. Everything else adds at least four grand over the Micra, including the Hyundai Accent, Kia Rio, Toyota Yaris, Honda Fit, Ford Fiesta, and even Nissan’s own Versa Note, larger than the Micra and starting at $14,498.

Nissan was even looking farther afield when it priced the Micra: the company expected it to compete with many used cars as well, where the buy-in is similar but the Micra comes with a full warranty, more financing options, and of course that new-car smell.

Even so, most people will want at least a few more features – and given that dealers don’t want to stock what doesn’t sell, you might even have trouble finding the rock-bottom trim on local lots. The next step up is a package that adds air conditioning, automatic transmission, and cruise control for $13,888. The SV trim starts at $14,288, while the top-line Micra SR is $17,388.

But even at this base S level, I’m feeling the Micra love. There may not be much to this car, but it’s fun to drive. There’s even a Canadian race series for it, the Nissan Micra Cup, where this little puddle-jumper shows off its nimble handling and decent power-to-weight ratio.

All Micra models use a 1.6L four-cylinder that spins out just 109 horsepower and 107 lb-ft of torque, but it’s still enough to make this little car feel peppy. The transmission could use a sixth gear on the highway to keep the revs down, but more cogs equal more money, and that would defeat the purpose. (The automatic offering is a four-speed, not a CVT, for the same cash-saving reason.) The shifter throws are pretty much “just right” – not so short that they’re tricky for new drivers, but certainly not the long, lazy travel that comes with many cheapie-car gearboxes. It snicks nicely into each slot and is part of the fun with this car.

And yes, I can really use “fun” and “twelve bucks under ten grand” in the same sentence. Granted, the Micra Cup cars are equipped with suspension upgrades and sticky tires, and I certainly wouldn’t be throwing the showroom version into the turns with the same enthusiasm that the race drivers do, but the consumer model is actually more tossable than you’d expect.

Natural Resources Canada estimates 7.9 L/100 km in combined driving, but I actually did considerably better that that, notching up 6.9 L/100 km over a week with it.

The steering feels direct and lively, the car responds quickly, and even with the short wheelbase and tall roof, it feels balanced and behaves itself respectably around corners. In tight spaces, it’ll turn on a dime and give you back some change. Many of its competitors share its fun-to-drive demeanour: the new Accent’s handling is also well done, and if you’ve never driven a Yaris it will surprise you, but you’re also paying much less for Nissan’s version. (However, you definitely do not want to have to make a hard emergency manoeuvre in a Mirage.)

The Micra is a well-proportioned little thing – cute, yes, but not in a far-too-twee Japanese-micro way as Nissan’s ill-fated Cube was – and it’s easy to get in and out and lift your groceries over the rear sill. The fifteen-inch steel wheels don’t add much to the looks, but they’ll be relatively inexpensive to shoe with appropriate winter rubber when the snow season arrives.

With no power locks, you have to turn the key in the doors and liftgate, and yes, you have to really pay attention because it is very easy to lock your keys inside (I came close once, but ultimately got through my week with it unscathed.) On the inside, Nissan needs to loosen the purse strings and spring for a blob of red paint on the lock switches, as it’s hard to tell if a door is locked by just looking at the toggle. The mirrors are manual adjustment as well, but they have little joysticks inside the car, so you’re not begging someone to stand outside and move the passenger-side one “just a little to the right – no, that’s too much….”

Everything is as cheap as you’d expect for the price. The seat cushions are short and I found it tough to adjust the chairs to exactly the right position. The fabric in the cargo compartment is rough and thin. Everything is plastic, the screens are orange with dot-matrix, and the heater dials move with a rough, disjointed feel. (Rather surprisingly, though, the turn signal stalk gives you a three-flash-to-pass when you tap it halfway.) 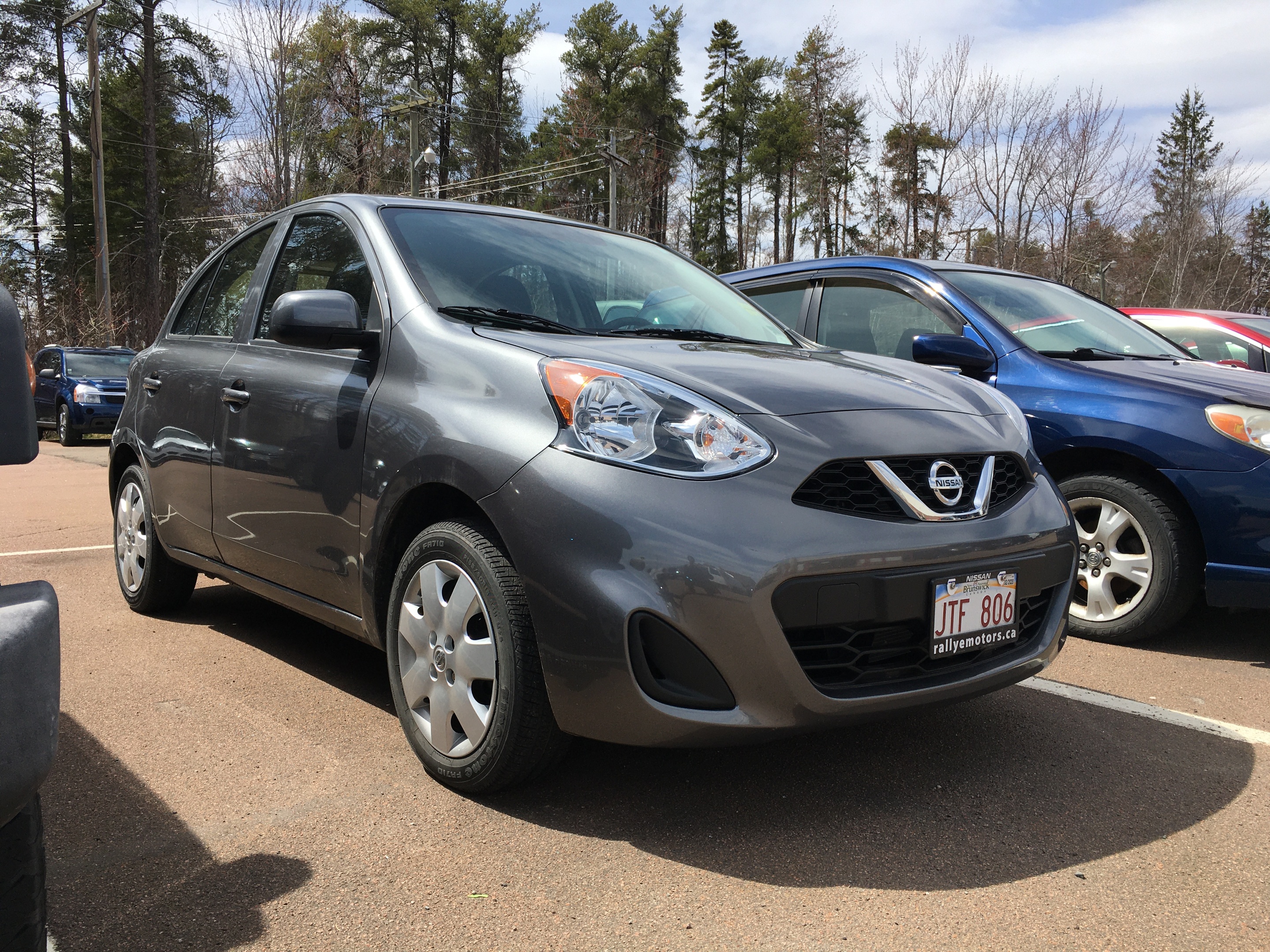 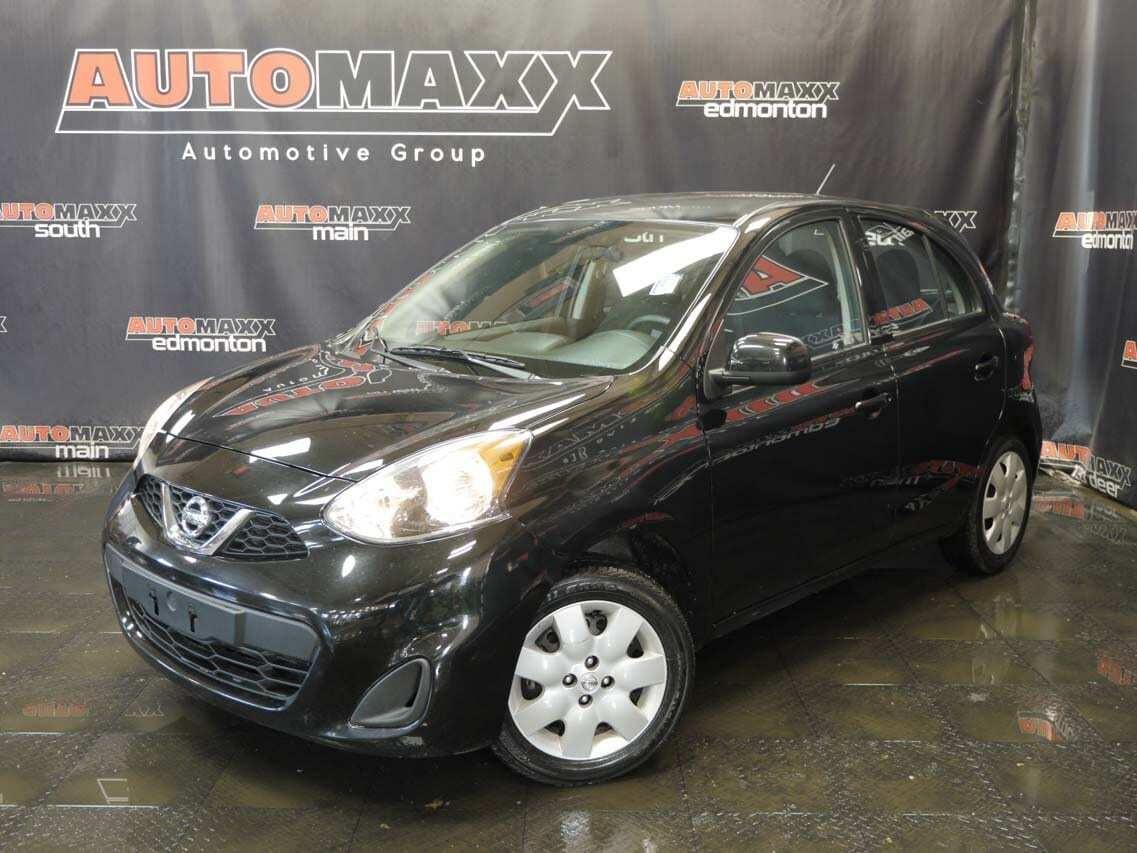 But on the other hand, everything is dead-nuts simple and with no distractions (a bonus for new drivers), there’s a massive glovebox to make up for the dearth of small-item storage up front, and once again, it comes back to the price.

Most will end up opting for something with a few more features, and that’s when you need to comparison-shop against its equally equipped competitors, but the Micra has a lot in place as a first car for a new driver, or a second run-about-town car for a family. Sometimes, simple – and cheap – is very good.

About Jil McIntosh
Jil McIntosh writes about new cars, antique and classic cars, and the automotive industry. A member of the Automobile Journalists Association of Canada (AJAC), she has won several awards for her writing, including Journalist of the Year in 2016. In addition to testing new vehicles, she owns two from the 1940s.
Follow me
You may also like
7.4