Before buying my first BMW, I remember wondering what all the fuss – and expense – was about. Within the first kilometre or two of a test drive, I realized why the Bavarians had dared proclaim themselves the purveyors of The Ultimate Driving Machine. There was a harmonious balance to the way the inline-six hummed along, the way the shifter worked through its gate, and the way the handling seemed almost fluid. Plus, there was a constant sense of substance and heft to the compact sedan.

A little stubby, kind of rounded, and with an oversized front grille to intimidate the proletariat.

That was fifteen or so years ago and I’ve since owned three of them. More recently, I have moved on to other machines as the cost of BMWs and the lustre of the roundel badge have dimmed a bit for me.

This week I found myself assigned the smallest of BMW’s ever-expanding SUV line-up, and my initial reactions somewhat echoed my thoughts from all those years ago with that first BMW.

“I see these things by the dozen around the Greater Toronto Area, but why? Are people that hard-up for a premium badge that they think they need this thing?”

It’s legitimately hard to find a poorly made machine these days; there are just varying degrees of goodness, with some being truly great. I know that it’s possible to spec out a Japanese- or Korean-branded SUV that’s going to have as much technology on board as this little Bimmer, but cost much less (see any of my recent reviews here of Kias, Hyundais, and Hondas, for reference).

The rather plain-looking grey paint doesn’t exactly excite and it makes the X1 resemble pretty well every other premium, compact luxury SUV out there. It’s a little stubby, kind of rounded, and with an oversized front grille to intimidate the proletariat driving non-premium-branded machinery.

“The weather’s supposed to be pretty good this week, maybe I can just ride my motorcycle instead,” I thought as I fidgeted with the mirrors, seat, and phone connection in the X1.

But then, something happened: I drove the X1 and started to like it, but not just for the reasons one might initially expect.

The first hour and a half behind the wheel of this X1 were done crossing the top of Toronto. For those familiar with this stretch of Highway 401, you know it’s about as fun as disinfecting a wound with habanero peppers. Parts of it move along at speeds notably higher than the posted limit, then inexplicably slow to a crawl, or stop.

Here, the little X1 impressed most due to BMW’s commitment to efficiency. Set to Eco Pro mode, the X1 makes throttle response softer, upshifts happen sooner, and the auto stop/start mode on high alert. The net result was an indicated average consumption rate of 7 L/100 km, and that’s with the air conditioning blasting. This is a Honda Civic-level of efficiency!

Now, these trip computer readings can be optimistic, but even a 10 percent margin of error would still represent exceptional efficiency for this type of vehicle in this type of driving. The government rates the X1 at 10.5 L/100 km in the city, 7.4 on the highway and a 9.1 combined rate, all of which should be very attainable by all but the most heavy-footed drivers.

Where the previous-generation X1 felt like an entry-level product inside, the current generation is a proper luxury machine. The look is familiar to anyone who has been in a BMW within the past decade, which is to say it’s clean and sophisticated, if not overly styled.

The materials are all top-shelf here, too. Of note, the natural finish to the dark-stained wood trim looked (and felt) especially interesting, and the dark mocha-coloured leather is a very tasteful addition. Although not as soft and buttery as the leather offered on costlier BMWs (and other makes), I know from experience that BMW’s tough “Dakota” leather is exceptionally durable and will still look really good for years to come, with just minimal attention.

Up front, the optional sport seats are outstanding. Not only do they offer plenty of adjustability, but there is ample bolstering to keep the driver and passenger planted during lively motoring, and comfortable as well. The back seat offers adjustable recline, but more importantly, it also offers a surprising amount of leg and headroom for a compact SUV like this. The rear seat also splits 40/20/40 and folds flat, expanding the luggage space from 505 L to 1,550 L, making it very competitive in this class.

One of the benefits of being at the lower end of the BMW price spectrum is that there is still some simplicity to the X1’s switchgear. Case in point: the gear selector is a good old-fashioned stalk with a button that moves through the PRND options. It’s not a push-button affair, nor a weird column stalk, or some overly convoluted song-and-dance mess that the Germans seem fond of using.

The centre stack is dominated by the iDrive screen perched on top. It is controlled via the rotary dial found between the seats and falls close to hand. I find its operation to be thoroughly smart and intuitive with primary functions all being easy to find and do. The screen, while not the largest out there, is bright and clear, and the mapping on the navigation offers just the right amount of information to be useful at speed. Apple CarPlay and Android Auto are integrated well here too, but it’s an extra $750 option to get it (along with an on-board Wi-Fi hotspot).

The 2.0-litre, turbocharged inline-four-cylinder engine is the only choice for the X1 in Canada. Likewise, all X1s utilize BMW’s excellent xDrive all-wheel-drive system that impressed me a few months ago when driving this car’s sexier cousin, the X2, up a gravel-and-rock-strewn mountain path.

The drivetrain is well-suited to this little rig, making it swift if not downright fast. When first started and from outside the car, the engine makes a coarse, almost diesel-like sound that’s not exactly the sort of soundtrack one associates with a sporting machine. Inside, however, there is ample sound deadening to keep most of the engine noise, as well as wind and road noise, appropriately damped for a vehicle in this class.

An eight-speed automatic is the only transmission offered here. This is another area that made me think “A-ha! So, this is why the X1 costs so much!” It’s an outstanding bit of engineering, managing to make the shifts go completely unnoticed most of the time, but also enabling lightning-quick gear changes when desired. Paddles are included as part of the Sport Package fitted to this test car and they work well enough, but were largely untouched since the transmission did a fine job without my intervention.

The brakes have great bite, maybe even a bit too much, causing them to be a bit grabby when an easier modulation is occasionally desired. Nevertheless, they do provide very good stopping power.

Steering feel is good by modern SUV standards, but a far cry from the heyday of the Ultimate Driving Machines. Still, it’s nicely weighted and without any slop, helping the driver position the X1 exactly where they want during hard cornering.

It’s well-balanced in its handling, too, managing to keep really decent composure and impressive grip, even if the road surface is less than perfect. 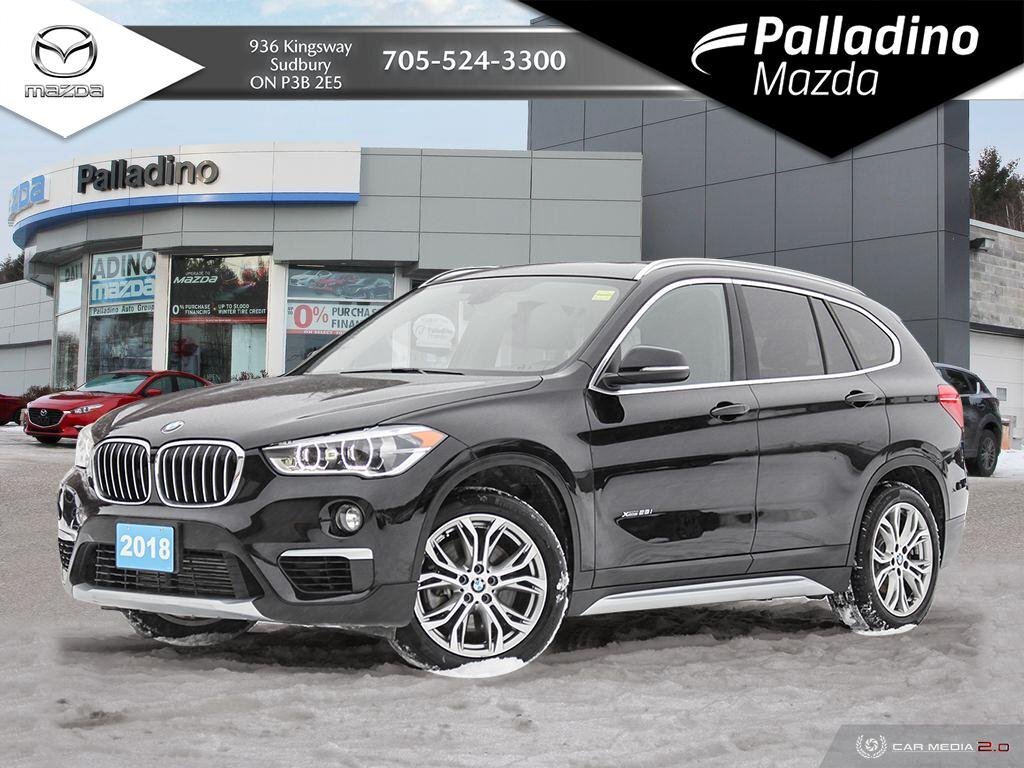 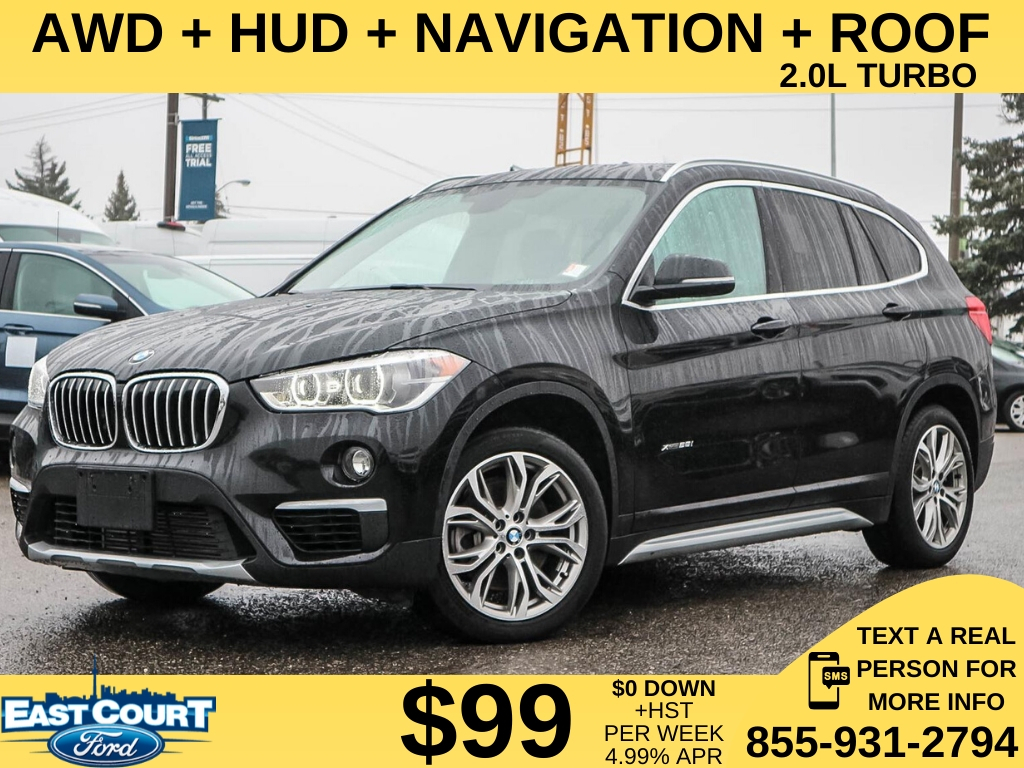 If the road is less than smooth, though, be forewarned, the ride is just this side of abusive. Modest (by Ontario standards) potholes are announced with a THWACK that can be heard and felt through the X1. Large potholes should be followed up by reading someone their last rites. The Bridgestone performance run-flat tires fitted as part of the sport pack offer as much compliance as a week-old bagel, and the suspension is as yielding as a two-by-four to the backside. I certainly don’t recall the X2’s suspension being like this, which I suppose is a testament to the quality of California’s desert roads where I drove it.

The BMW X1 xDrive28i starts at $40,000. This rig, optioned up as one might reasonably do (that is to say, not completely over-the-top), cruises past $52,000 before destination fees and taxes. A buyer could spend almost twenty-grand less and get a truly excellent compact SUV, but it won’t have the level of luxury or the impressive handling performance the X1 possesses. More importantly, for the majority of the buyers, those more affordable marques don’t have the brand cachet of owning a BMW.

The X1 is a compact luxury SUV that impresses in a lot of ways that make it justifiable to spend the money for the premium brand. For the doubters, go for a test drive before you make up your mind.

About Jeff Wilson
Jeff has been an automotive and motorcycle journalist for nearly a decade, but his passion for cars and bikes stretches back to his childhood. A member of AJAC, Jeff has also served on its board of directors, and has won multiple awards for both his writing and photography. When chasing his automotive dreams, Jeff also divides his time between being a father and a television producer with an internationally acclaimed, Emmy-nominated production team.
Follow me
You may also like
7.7