It can be a heck of a challenge to balance state-of-the-art technology with refinement and driveability. Too often lately, we’ve seen tech for tech’s sake in modern machinery, and sometimes it becomes a distraction from the enjoyment of driving. Good technology improves lives without making a big fuss.

Acura seems to want the technological advancements infused into its new RDX compact luxury SUV to define the machine, and the net result is an almost seamless integration of innovation throughout the driver experience.

The RDX needs to be great since it’s the sales leader for Acura, and a huge seller in the segment overall. Fortunately for the buyers who have loved the RDX in the past (or those who will become buyers), and for Acura, the new RDX embodies what has made this model so popular in the past: refinement, a powerful engine, and great value.

Replacing the 3.5L V6 from last year’s model is a new 2.0L turbocharged four-cylinder as the only engine available. Starting out as the same celebrated powerplant from the Honda Accord, it’s tuned here to put out 272 hp and 280 lb-ft of torque. While down a bit in horsepower from the V6, the torque is up a notable 28 lb-ft and both figures better the outputs of the RDX’s key competitors from Audi, BMW, Mercedes, and Volvo.

What’s more, the power curve is much flatter than before, making the Acura more driveable in normal conditions. The power-to-weight ratio of the RDX is better than its competitors, also lending to better performance. Our drive around western Vancouver Island showcased the little engine’s flexibility as we hurried the Acura up and down the twisting mountain roads and around the endless flow of dawdling tourists.

There’s a new 10-speed Sequential SportShift automatic transmission that helps the RDX’s driveability, too. While I was never impressed by Acura’s nine-speed found in the TLX, this new 10-speed never seems to be caught hunting for the right gear.

Acura claims this new transmission provides a first gear that’s 15 percent lower than last year’s, which helps the RDX energetically jump off the line from a standstill, and four-gear downshifts are programmed in for when they’re needed to really get the hustle on a passing manoeuvre. More importantly, under normal operating conditions, the shifts go mostly unnoticed, but during more energetic driving, gear swaps happen with immediacy.

Unsurprisingly, the combination of smaller engine and 10-speed gearbox nets appreciable fuel efficiency benefit. Roughly 10 percent better than the old RDX, the new one is rated at 11.0 L/100 km city, 8.6 highway and 9.9 combined. The RDX is an SUV, not a high-performance sport sedan, yet utilizes the latest application of Acura’s Super Handling All-Wheel Drive system to direct power to the ground. As much as 70 percent of the RDX’s torque can be sent rearward, and up to 100 percent of that twist can be sent to either right or left, as best utilized. Acura claims its torque vectoring provides greater confidence in inclement weather conditions, but hustling the RDX on rainy roads near Tofino, BC, we also discovered that it helps the RDX turn in quicker.

What’s more, thanks to wheels that have now been pushed further to the corners (the new RDX has both a wider track and longer wheelbase), coupled with a MacPherson strut front, and all-new five-link rear chassis design, the RDX is better planted during high-speed handling.

Steering is typical of most modern electrically assisted systems in that it’s lacking in feel, but it’s quick with reasonably heavy weighting and good immediacy.

An A-Spec variation is available on the RDX for the first time and is expected to account for 35 percent of the model’s sales. It features sporty-looking trim bits, as well as 20-inch wheels with more aggressive 255/45R20 Goodyear tires and a slightly different suspension tune. Smaller yet still sizable 19-inch wheels are standard fare on all other trim levels.

Overall braking performance is said to be improved as well, with shorter overall stopping distances. What’s interesting here is that Acura has actually engineered out some of the initial bite in order to make braking more progressive and linear. Compared to the Germans, it just ends up feeling a bit mushy and definitely took me a while to get used to.

Fiddling with the Integrated Dynamics System settings via the giant knob placed front and centre on the dash, we found that in Sport+ modes, not only is the throttle and transmission responsiveness dialled up, but so too is the steering weighting and the Active Sound Control to digitally “enhance” the soundtrack reaching the cabin. It’s all pretty high-tech stuff, but it operates as promised. Despite a product presentation that revolved around the brand’s Precision Crafted Performance mantra, Acura has created a cabin that, particularly in up-level trims, is quite lavishly appointed. Models with contrasting interior colour combos look particularly posh, with creamy-soft Milano leather, open-pore Olive Ash wood trim, and real aluminum trim where it looks like aluminum. Most of the plastics feel sufficiently pliable and upscale, too.

The panorama sunroof keeps the cabin bright and airy-feeling, even when finished in darker shades, and it’s standard fare on even the entry-level RDX. This last note is particularly interesting since cutting such a large hole in the roof does no favours for body structure stiffness – key to a solid handling feel – yet the new RDX is 38 percent stiffer than before.

On top-trim models, the front seats are 16-way adjustable and do an admirable job of balancing decadent suppleness with adequate bolstering to keep occupants where they belong during spirited jaunts. Even the back seats are surprisingly comfortable with plenty of head, leg, and shoulder room for a pair of adults, and three on occasion. Thanks to a wheelbase that’s stretched 65 mm, Acura claims 24 percent more rear knee space than the next largest competitor. 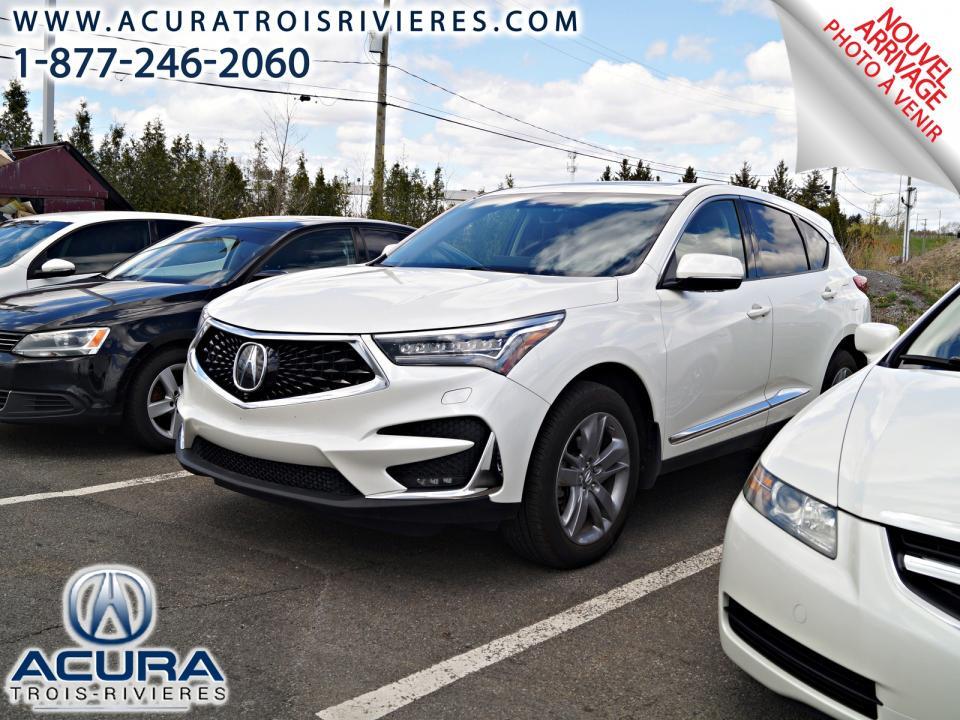 There’s also class-leading cargo capacity with 1,668 L available with the back seat up, and up to 2,260 L with it folded flat.

The cockpit benefits from its own technological upgrade, focussed mostly on Acura’s all-new True Touchpad Interface – something that was certainly needed. Mounted on the floating centre console directly behind the shift buttons, Acura has placed a two-hemisphere touchpad that maps at a 1:1, absolute-positioning ratio on the 10.2-inch HD screen. This means a driver can more easily navigate the system’s menus and apps without having to hunt or take eyes off the road.

Of course that’s all in theory. In reality, anyone who has used similar systems, like the one found in modern Lexus models, will require some time to recalibrate their brains to work the 1:1 ratio on the fly, using it like a touchscreen, rather than a scrolling cursor set up. Manually tuning through radio stations (instead of presets) took multiple steps, as did trying to zoom in or out on the navigation screen.

Of note, although Acura employs an all-new Android-based operating system, Android Auto won’t be compatible at the RDX’s launch, pending Google’s certification of the touchpad operation, but will soon be a downloadable update. Apple CarPlay is compatible at the outset.

Graphics are crisp and, having teamed up with Here, the mapping is particularly slick with 3D terrain and online POI searches available. In top-trim Platinum Elite models, a customizable 10.5-inch head-up display is also offered.

4G LTE in-car Wi-Fi is available, but a wireless charge pad is not; a decision made by Acura after learning that only a very small percentage of motorists actually want or use such systems. Instead, having numerous USB charge points positioned around the car is preferred and offered here.

Acura has also fitted its most advanced audio system to the RDX. With 16-speakers dispersed throughout the cabin – including on the ceiling – the 710-watt system provides astonishingly clear and full sound. The German competitors would charge serious money for optional systems that sound almost as good as this. Of course, good sound systems are only worthwhile in sufficiently quiet and composed machines, and fortunately the RDX utilizes good sound deadening to keep wind and road noise quelled. Engine sound is kept at bay too, unless Sport+ mode is selected, which digitally amplifies engine sounds.

As a premium product, styling plays a huge role in the emotional buying process. Where the outgoing RDX model lacked character in its exterior aesthetic (and let’s face it, where Acura has occasionally stumbled in recent years), the RDX’s new Precision Crafted Performance ethos translates well to this new RDX.

Acura’s Jewel Eye LED headlights continue on and help lend some familiarity to the RDX’s face, but the broad pentagon-shaped grille with its spider-web-like design spinning out from the A-logo help give a bolder, more sporting look than before.

The shorter front overhang afforded by the more compact 2.0-litre engine helps give the RDX a more planted appearance. This is emphasized further with the larger wheels on the A-Spec trim – the most aggressive-looking RDX. The rear of the RDX is slightly less distinctive, but still handsome.

The RDX was designed in California and is built in Ohio, mostly to serve an SUV-hungry North American market (although it will also be sold in China). Getting the RDX right was absolutely crucial for Acura given the importance of the model in the segment and within its own sales numbers.

As a sign of what’s to come in terms of both technology and styling, it’s equally important to Acura. Not only is the RDX dynamically – and technologically – superior to its highly popular predecessor, it has given Acura fans a glimpse into the exciting improvements yet to come throughout the rest of the line-up.

The RDX hits dealerships in Canada this month.

Audi Q5 Audi Q5 BMW X3 BMW X3 Infiniti QX50 Infiniti QX50 Lexus NX Lexus NX Mercedes-Benz GLC-Class Mercedes-Benz GLC-Class
About Jeff Wilson
Jeff has been an automotive and motorcycle journalist for nearly a decade, but his passion for cars and bikes stretches back to his childhood. A member of AJAC, Jeff has also served on its board of directors, and has won multiple awards for both his writing and photography. When chasing his automotive dreams, Jeff also divides his time between being a father and a television producer with an internationally acclaimed, Emmy-nominated production team.
Follow me
You may also like
AdChoices
Latest Articles