Remember when Cadillac was The Standard of the World?

Rear legroom? Please, NBA players would be able to stretch out back there.

Today, General Motors’ premium brand consists of a lineup of machinery that ranges from luxury cars, to sanity-questioning sports sedans, to enormous, aging sport-utility vehicles; and while they’re all decent performers and sufficiently luxurious, none truly stand out as the absolute best choice in any of their competitive categories.

Such has been the case for most of the last half-century or so where various offerings from overseas have overshadowed the laurel-and-crest (now just crest) brand’s machines whether in quality, performance, or refinement.

Having logged over 1,000 kilometres of seat time with Cadillac’s flagship CT6 large luxury sedan, my perception of the brand hasn’t really changed much.

Nose-to-tail, the CT6 is a handsome car with serious, imposing styling. It has presence, gravitas, and – thanks to those bright LED lights and the powerful visage – the ability to intimidate and wake up oblivious left-lane hogs and move them over.

I really like the look of the CT6 – especially finished in Stellar Black Metallic (or “Mafioso”, as I prefer to call it). To my eye, this is the most successful application of Cadillac’s very crisp and angular design language thanks to the big car’s proportions. To give a sense of scale, those are 20-inch wheels on this CT6 and they don’t look cartoonishly large. Even the wing mirrors are scaled to reinforce the long, low, and wide stance of the car.

Inside, both driver and passengers are met with an exceptionally spacious cabin finished in top-shelf materials. Fragrant leather covers a lot of acreage here, from seats to dash to door panels, and it’s all nicely stitched. Some of the leather surfaces on the dash are perforated, others smooth to break up the visual uniformity. This test car also featured some beautiful high gloss wood, carbon fibre, and some strips of aluminum that stand out in the darkness. All posh stuff, but it does start to make for a busy design.

The front seats are big, complex affairs, and they’re magnificently comfortable. Heated and cooled, of course, they also feature massaging functionality that’s as effective as any I’ve experienced from the competitors. Engineering decadent, highly adjustable, multi-function seats is an absolute necessity for the six-figure luxury sedan category, and Cadillac has aced it here in the CT6.

What’s more impressive is that rear-seat passengers give up nothing to those in the front, enjoying the same heated, cooled, and massaging tasks, plus the ability to recline the seats, too. Legroom? Please, NBA players would be able to stretch out back there.

This Platinum trim car also features a panoramic sunroof with individual rear and front passenger-area sun shade controls, plus a rear-seat entertainment system with screens that rise out of the front seatbacks. A remote control and a couple pairs of Bose headphones are found in the fold-down console that slots between the two rear passengers. My son’s discovery that he could mess with the stereo via the remote control from the rear seat was my music-listening nightmare.

Back up front, the CT6’s dash layout looks contemporary and sleek, but calls to question some ergonomic challenges. For one, the HVAC vents are placed so low on the dash that I found the sun coming in through the windshield would cause the upper half of the greenhouse to be uncomfortably warm despite the automatic climate control settings keeping the rest of the car at the desired temperature.

Every Cadillac I’ve driven over the past three or four years has drawn my ire for the functionality of Cadillac’s CUE infotainment system. While improved over earlier-generation units, CUE nevertheless remains a flawed system, with most of my frustration stemming from the volume slider that requires multiple taps, slides, swearing, and anger to achieve significant change to the volume of the music.

What’s more, the haptic touchscreen controls for the rest of the system’s functionality generally require two or more taps to execute any action. The system lagged often, and even Apple CarPlay seemed to hiccup on occasion – an experience I’ve not had in any other car lately.

The Bose Panaray audio system sounds very good, but to my ear still not quite as sensational as the upgraded systems offered by the Germans or by Lexus.

Cadillac has also fitted a touchpad just ahead of the arm rest on the centre console, which in theory should operate similarly to systems offered in competing luxury machines, but here had limited application and was quickly abandoned in favour of just repeatedly mashing at the touchscreen itself. Compounding the disappointment in this system is the fact that GM has developed simpler, less-fashionable, but far more effective systems in their more affordable machines.

One other interior curiosity: the rear-view mirror camera. Cadillac has enabled the rear-view mirror to toggle between acting as a normal rear-view mirror and a small screen depicting what a wide-angle camera sees behind the car. When stationary, this seems like a brilliant idea since it gives a much wider, clearer view behind the car than what a reflection through the cabin and back glass can do. However, in practice, at speeds, I found my eyes struggled to re-focus on the screen for quick mirror checks, and began to give me a headache after only a few minutes of driving.

Actually driving the car, on the other hand, drew fewer complaints. Platinum trim cars come standard with the Active Chassis Package that includes GM’s celebrated Magnetic Ride Control. It’s remarkable how well such a large car can balance between adept handling and a fluid ride. Large bumps are mostly sensed, rather than truly felt, but there’s none of the floatiness one might expect from a luxo-cruiser.

The steering feel is heavy, but fairly numb, yet the car manages its body motions as well as – or better than – any of the imported competition. There’s active rear steering at play here too, that surely contributes to the expediency with which the CT6 is able to change directions and contributing to an on-road feel that’s smaller than its dimensions.

The CT6 is exceptionally quiet. Road noise is barely perceptible and wind noise is virtually non-existent. The V6 engine snarls pleasingly when pressed hard, but otherwise purrs along smoothly without drawing attention to itself.

Power from that V6 – a twin-turbo, 3.0-litre affair – is rated at more than 400 horsepower and 400 lb-ft of torque, and while the CT6 can move swiftly when properly caned, it never felt as strong as that much torque should, even for a car weighing in at 2,000 kg. In looking at the specs, I noticed the CT6 needs at least 2,500 rpms to produce that torque output. In the olden days of normally aspirated engines, that would’ve been plenty of low-end grunt, but we’ve come to expect full thrust from right-off-idle speeds from our turbocharged engines, and a Lexus LS 500’s twin-turbo V6 dispenses 442 lb-ft from only 1,600 rpms, for instance.

The engine shouldn’t take all the blame, however, since the eight-speed transmission it’s bolted to is reluctant to downshift, causing some sluggishness. The transmission is definitely tuned for luxury over sport (even when more sporting drive modes are selected) which means they’re buttery-smooth under normal driving conditions, but feel slow-witted for spirited driving. The steering-wheel-affixed shift paddles do nothing to liven the process up and were largely ignored during my drives. Off-the-line excitement is further hampered by an overly aggressive auto stop-start function that seemed determined to keep the car off as much as it possibly could.

The CT6’s brakes are decently powerful, but lack initial bite, which reinforces a disconnected feel, making it less of a driver’s car than some of the European competitors. 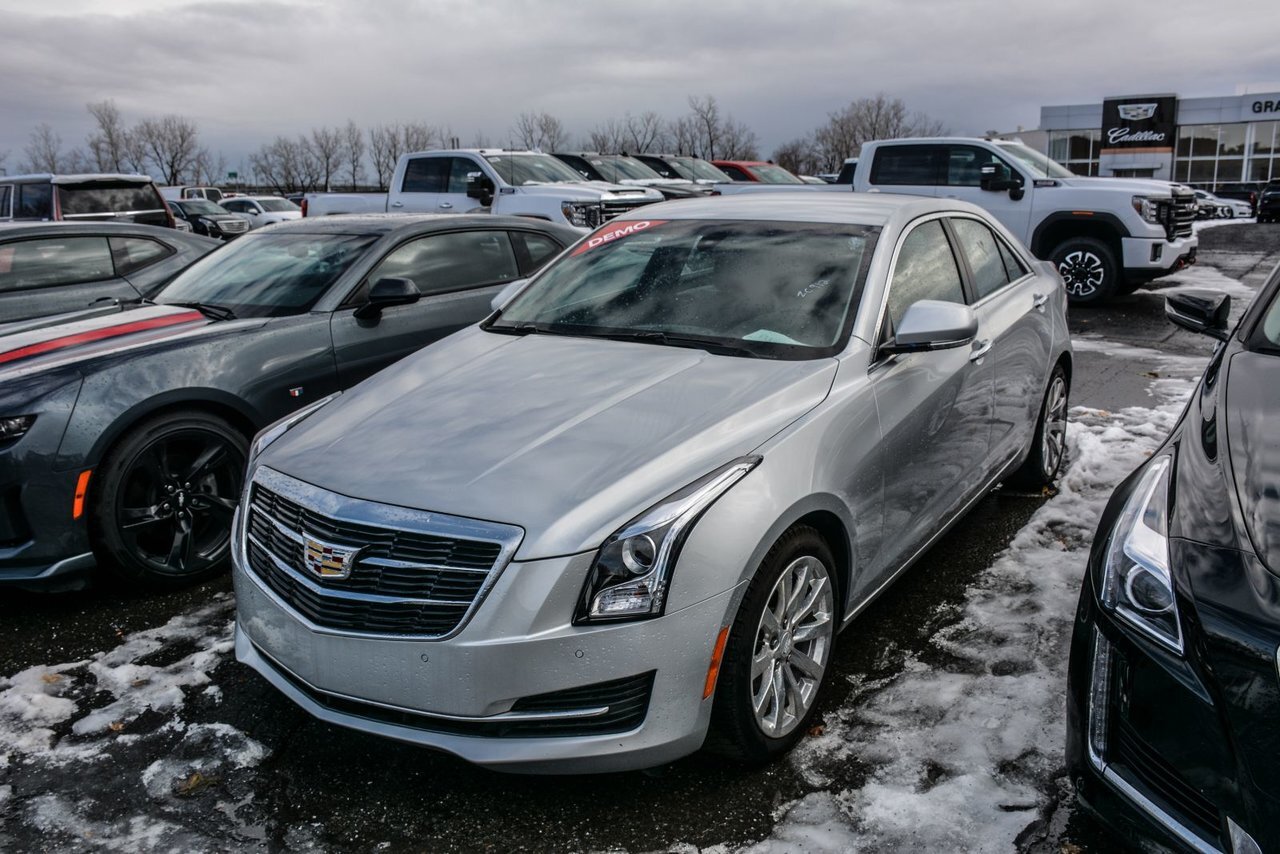 Lastly, there has been much ado about Cadillac’s Super Cruise semi-autonomous driving system. When driving on one of the freeways in Canada or the United States that has been painstakingly detailed by Cadillac’s mapping partners, the car will stay within its lane and drive at a speed prescribed by the driver, maintaining a safe distance from the objects around it. The system still requires the driver to keep his or her eyes on the road – and the car watches you with a camera to ensure you’re doing so – or else the system shuts down again.

While it works as advertised, I found the experience to be virtually the same as in the Honda CR-V I drove in January equipped with lane-keeping assist and dynamic cruise control. The Honda demanded a finger touch on the steering wheel every so often, but otherwise, managed to drive itself for 30–40 km down Highway 401.

Cadillac has created a well-built full-sized luxury sedan that drives impressively and is chock-full of the luxury and technology expected at a six-figure price tag. The trouble is, all of Cadillac’s primary competitors do the same, at least as well as the General has done, suggesting that the CT6 still isn’t the Standard of the World. Maybe that’s why Cadillac is just telling buyers now to Dare Greatly instead.

About Jeff Wilson
Jeff has been an automotive and motorcycle journalist for nearly a decade, but his passion for cars and bikes stretches back to his childhood. A member of AJAC, Jeff has also served on its board of directors, and has won multiple awards for both his writing and photography. When chasing his automotive dreams, Jeff also divides his time between being a father and a television producer with an internationally acclaimed, Emmy-nominated production team.
Follow me
You may also like
8.0