Some tiny cars go big on style and funky design. Others try and pack in as many features as possible. And then there’s the simple, small, practical car with enough features to be comfortable but not enough to break the bank.

If you want a small car to dart around potholes and parked cars, the Yaris delivers in the handling department.

Toyota’s 2018 Yaris Hatchback is firmly in the last group. The last time it was completely redesigned was in 2011 and it’s one of just three vehicles sold in Canada that still offers a four-speed automatic. But Toyota has made small changes to try and keep their smallest car fresh. And is a four-speed really a problem in a car at this size and price point?

The Yaris Hatchback – the Yaris sedan is a different vehicle altogether based on the Mazda2 – is a simple car, aimed at a simple segment. A low sticker price, small volumes, and a tiny footprint means that there isn’t as much room for the innovation and features that can happen a size or two up the ladder.

Simple doesn’t mean completely boring, though, and Toyota has taken some steps this year to add a little bit more flair to the Yaris – like a revised nose and tail. This is a surprisingly aggressive nose for Toyota, and the new sharper lines look like an angry version of the last-generation Prius. That doesn’t sound like a compliment, but the look works. The front grille takes up most of the front of the car, and looks better in provinces that don’t require a front plate.

The changes in the rear are more noticeable. The wide taillights now extend into the hatch, and the rear bumper gets a body crease that arches into the tailgate and over to the other side. It’s not as polished as the Rio or Accent, but it looks significantly more interesting than it did just last year.

Toyota says that the interior trim has been similarly revised, but you’ll be hard-pressed to spot the changes. What you will notice are the heated front seats that are now standard on every trim. These seats deserve special attention. Not because of their comfort, although they are comfortable and supportive for this class, but for the ferocity of those heating elements. These are the hottest and quickest-warming heated seats I have ever sat in. It was well below zero when I had the Yaris, but the seats were switched back off within five minutes every time, lest I ended up with a conflagration in my pants.

The last of the changes are the addition of a back-up camera and hill-start assist to all trims. The cameras are mandatory as of May 2018, so it’s not a surprise to see them on this car.

Toyota offers the Yaris Hatch in three- and five-door versions, making it the only three-door in this segment. The three-door is base CE trim only, with the five-door arriving in LE and SE trims. All models come with a choice of five-speed manual or that four-speed automatic.

Under the short hood of the Yaris is a 1.5L four that has an output best described as adequate. 106 hp and 103 lb-ft of torque. That’s not a lot of power, but remember that this is a simple car. It tips the scales at not much more than a tonne. In city driving, acceleration is, again, adequate. It will get you into that gap in traffic, or ahead at that traffic light, with a prod of your right foot. Two-lane highway passing might take some forethought, but on-ramps won’t leave you rocking forward to try and make it quicker. It’s not a silent engine either, especially when run at high rpm because of that four-speed box. It’s never offensive, you just aren’t likely to forget that it’s there.

With the three-pedal option instead of the auto, this car offers lower cruising rpm, better acceleration, and narrower gaps between gears. But I will say this about the automatic: at least it isn’t a CVT. Four long gears in a car that is happy to downshift are better than the sluggish starts and droning from low-power cars with a CVT. While a six-speed auto would be better, the four-speed beats a CVT. But drivers, and anyone who wants to extract a bit more speed from this car, should pick the stick.

Fuel economy is good for the class in the city at 7.9 L/100 km, but the four-speed does hurt it on the highway where it trails the competition with 6.8.

On the road, the light weight of the Yaris gives it good agility for dodging downtown potholes and obstacles. Toss it hard into a corner, though, and you’ll be rewarded with understeer and roll. If you want a subcompact hot hatch, you’re looking in the wrong place. If you want a small car to dart around potholes and parked cars, the Yaris delivers in the handling department.

The ventilation controls are massive pickup-truck-grade dials – easy to operate even with winter mitts on. It’s a refreshing change from the touchscreen/slider controls of most current cars. Turn the red/blue knob until you get comfy, turn the other one until it’s blowing where you want, and then leave it. After the second attempt, you won’t need to look down again. Control it by feel instead of looking down and mashing tiny buttons.

The Yaris uses a 6.1-inch touchscreen that maintains Toyota’s old aversion to Apple CarPlay and Android Auto. It looks dated, but it operates smoothly and is easy to control. Audio quality is acceptable, even when you turn the stereo up to cover the engine’s revving. Where this car excels is outward visibility. The upright seat and low dash might not leave much room for the driver’s legs between seat and wheel (I punched myself in the thigh more than once when parking) but it gives the Yaris a massive greenhouse. Parking is a breeze thanks to the massive glass and tiny overhangs. With windowsills rising with every generation of car, and massive crossover rear pillars that can hide small countries when you’re reversing, the thin pillars and tall roof of the Yaris are a breath of fresh air.

That airiness means 442 L of cargo space behind the rear seats, although it looks tight back there. Rear passengers will find it big on headroom, but short on legroom. Toyota doesn’t give a cargo volume figure for space with the seats folded, but the old Mark One eyeball says that it comes up short to the Honda Fit’s rear cavern. It will still hold plenty of whatever you want to pack in there. 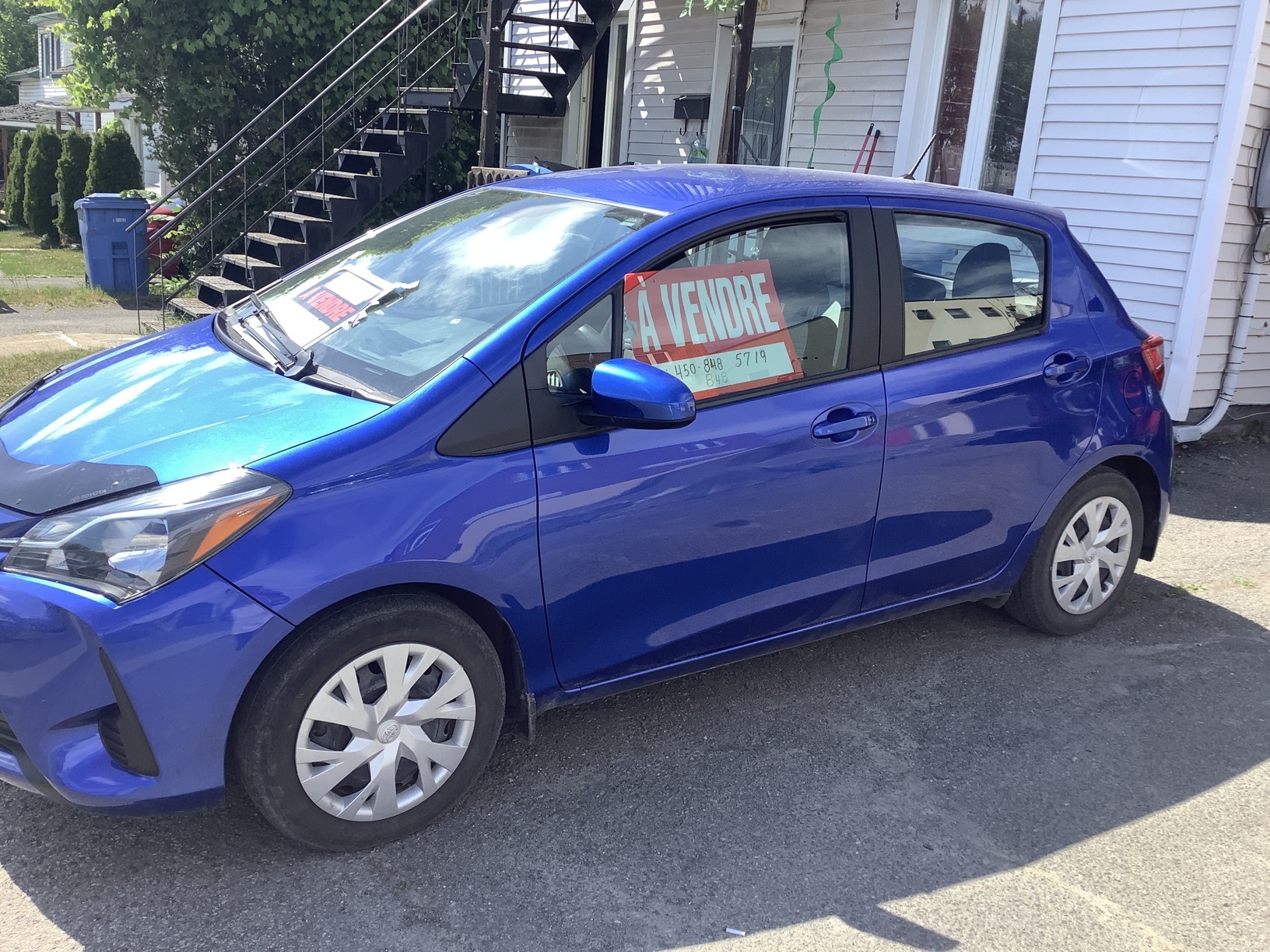 Toyota packs big safety features into this small car. It has Toyota’s pre-collision system that will help stop you before a crash, lane-departure alert, and auto high-beams. All standard on even the base car. But it’s missing the radar cruise control and lane assist that big brother Corolla offers. And that’s the rub for cars in this size class. Their bigger siblings.

If you want the smallest size of car around, the Yaris offers that. And it puts a good amount of stuff into a small package. But the Corolla offers more refinement, more active safety features, more space, and even better fuel economy. And it does it all for nearly the same price. If you’re buying a car this size instead of the bigger stablemate, that means that you’re probably looking for a simple car with a small footprint. Reliable, easy to park, able to swallow lots of stuff. And the Yaris checks all of those boxes. Economical transportation that doesn’t inspire, but probably won’t make you regret going subcompact.

About Evan Williams
Evan has been covering cars for close to five years, but has been reading about them since he was 2. He's a certified engineering technologist and a member of AJAC. If it moves and has an engine, Evan's probably interested in it.
Follow me
You may also like
6.5