After years of saying “Thanks, but no thanks,” Honda is now all-in on turbocharging, and it’s no surprise that after making waves with its hot-selling Civic, the automaker has ported both of the compact car’s available turbo mills over to its all-new Accord flagship. While the 2.0L unit lifted from the can’t-look-away Civic Type R might get the most press, it’s the smaller of the pair – the 1.5L four – that will do the briskest of business among family car buyers.

Comes across as significantly more car than you’d expect to drive home for its price tag.

This makes the completely redesigned 2018 Honda Accord 1.5T Touring that most Canadian of automotive combos: the thrifty base engine matched with the highest standard of features and equipment in the catalogue. That the car also happens to be the strongest mid-size effort from the storied Japanese brand in years should have anyone in the market for a do-everything four-door adding this version of the Accord to any test drive shortlist.

While still clearly linked to the family DNA of its predecessor, the current-generation Honda Accord’s fastback design adds life to what had been a handsome, but somewhat stodgy silhouette. Seen from behind, the new Accord’s presentation is fresh and very nearly sporty, while its profile belies a longer-wheelbase design stuffed inside a total package that’s actually a smidge shorter than it was the year before. On the Touring, the eyes also benefit from the presence of LED lighting all around, an unusual chrome line that runs from nearly the starting point of the front door to the bumper, and attractive blade-like 19-inch alloy rims.

Inside the Accord, the benefits of the new body shape reveal themselves by way of the additional interior room – 70 extra litres – as well as more space to stretch out and stow your feet when riding in the rear. It doesn’t hurt that the Touring also brings with it heated leather-wrapped seats for those occupying the four outboard positions (plus ventilation for the two front buckets), a head-up display to help the driver focus their attention on the road, standard navigation, a steering wheel warmer, and wireless charging for mobile devices that support that particular feature.

Then there’s Honda’s suite of active safety gear, which for the Accord Touring includes automatic braking, forward collision warning, a lane-departure warning system, adaptive cruise control, and a blind-spot monitoring system. There aren’t any options packages offered with the Touring, and aside from an upgrade to adaptive suspension, selecting the larger 2.0T engine won’t bring any extra equipment to the table, either.

Despite the significant power difference between the two editions of the Touring, the 1.5T’s 192 horses and 192 lb-ft of torque are perfectly adequate in almost every driving scenario, including a long highway stint in the car where the drivetrain’s only true weak link – its droning continuously variable transmission – was far less intrusive. The flat torque curve imparted by the four-cylinder’s turbocharger allows the CVT to sit at lower rpm for longer than you’d expect from a more traditional gearbox, especially around town, which takes a bit of getting used to. The upshot is an official combined fuel economy rating of 7.6 L/100 km (during harsh winter cold I was able to report 8.0 L/100 km on the highway and 11.0 L/100 km in mixed driving).

Honda Accord Sedan available on autoTRADER.ca 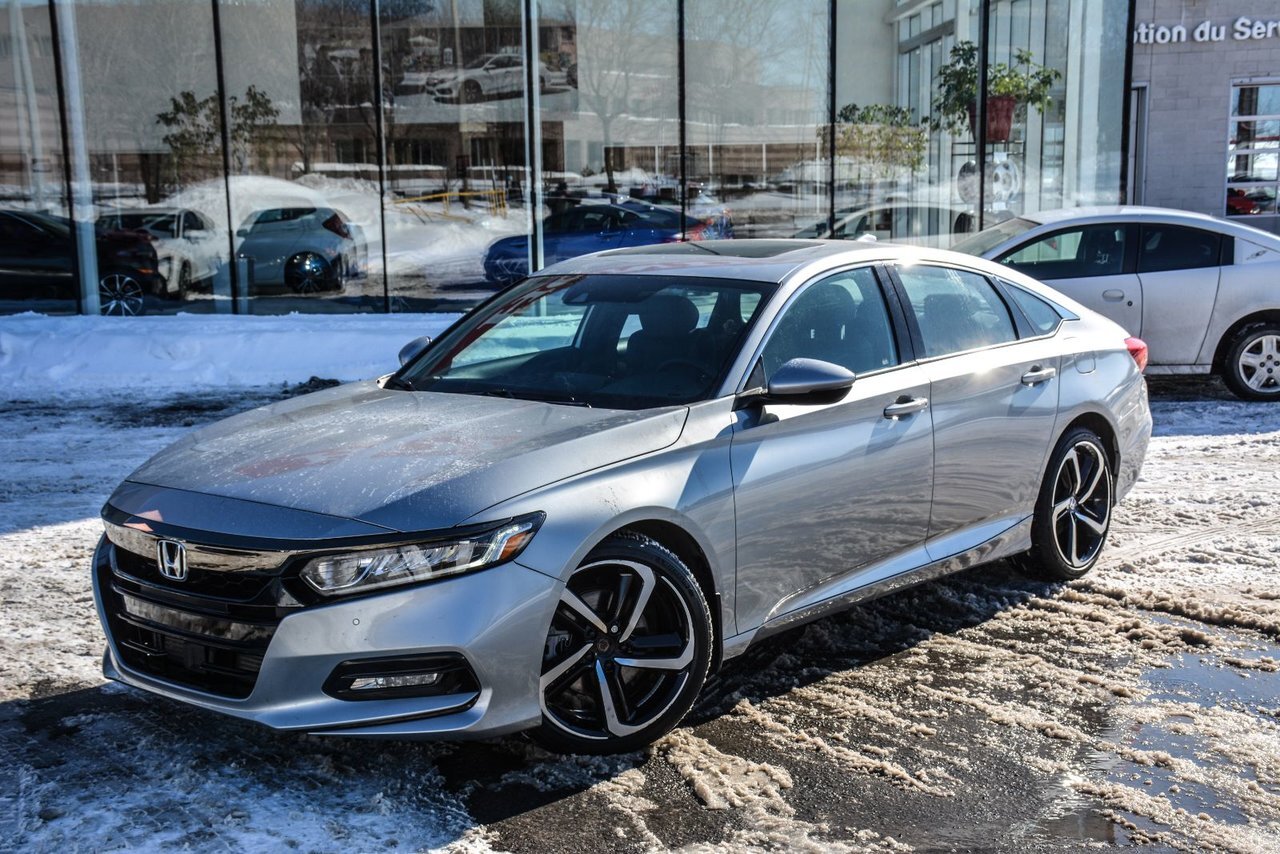 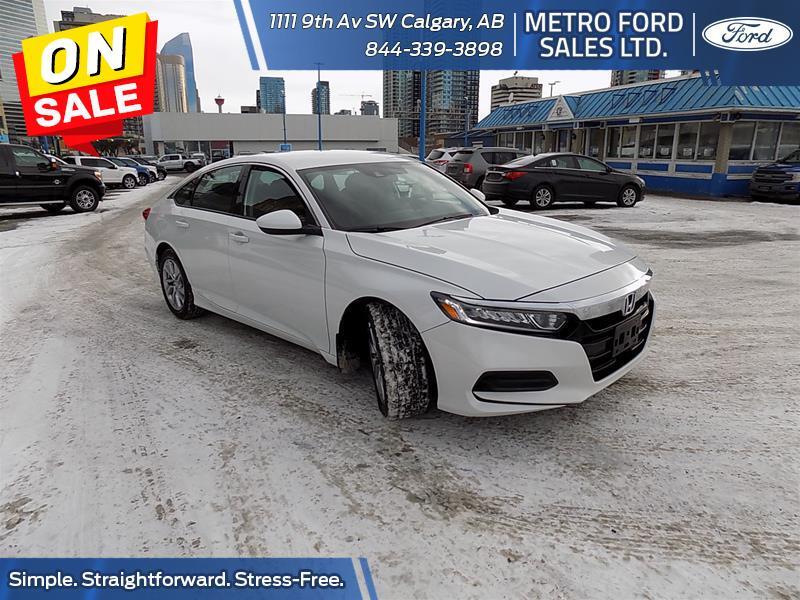 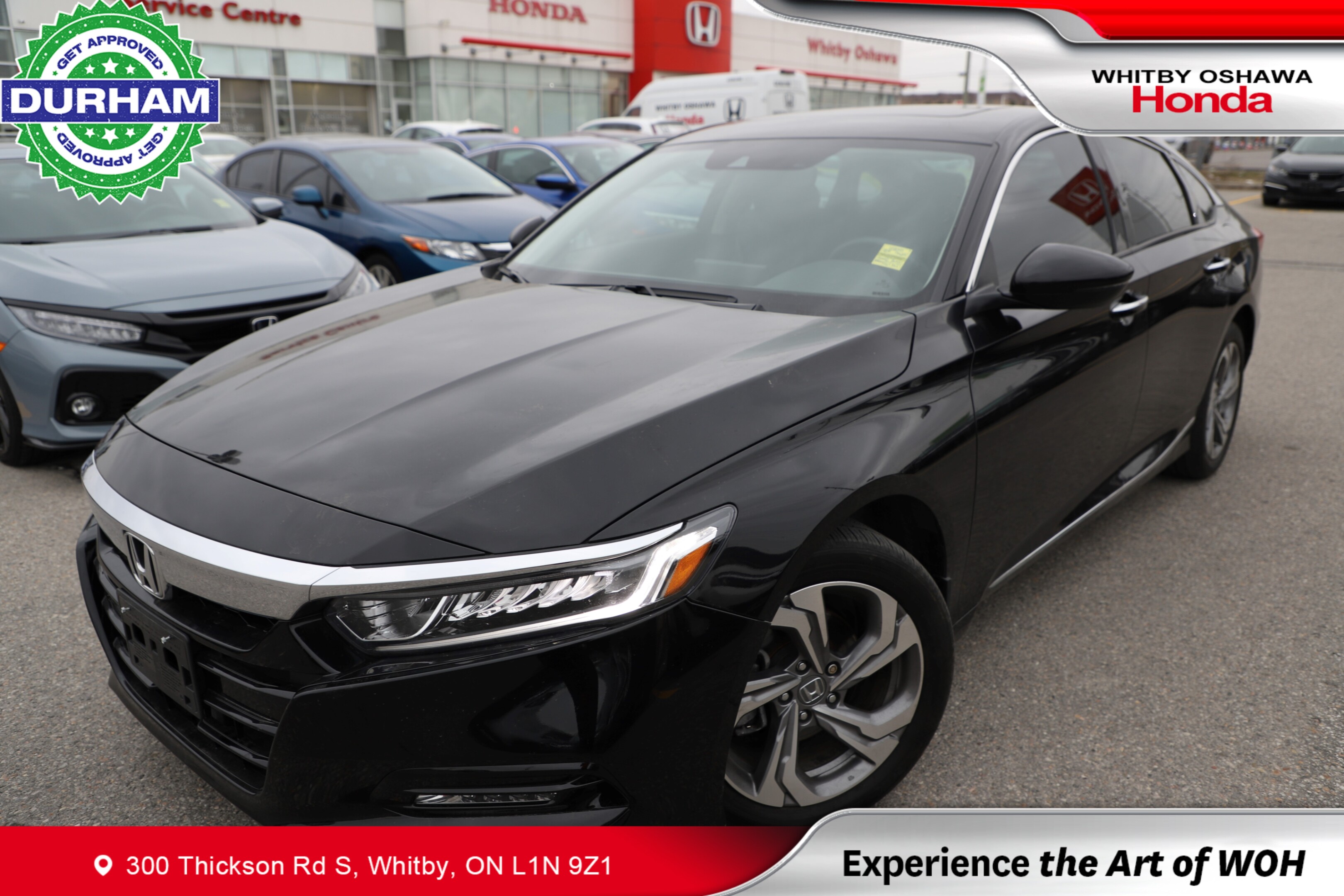 More intriguing than the details of its powerplant is the 2018 Honda Accord Touring’s overall demeanour both in urban traffic and when enjoying the relative freedom of the highway. Despite its relatively modest curb weight and proportions, the Accord impressed me with just how solidly built it felt, its stiffer platform delivering not sporty levels of athleticism but rather confident handling paired with buttoned-down cruising. The car makes more of an impression in these intangible areas than its longtime rival the Toyota Camry (which is also new for 2018), especially when the latter is found in four-cylinder trim.

Foibles? There are a few, including an overly complicated interface for the interactive gauge cluster and a better, but not quite perfect version of Honda’s touchscreen infotainment system. Then there’s the ever-present spectre of winter occluding the sensors needed by the Accord to see the lines on the road (when they’re visible at all) as well as the vehicle ahead to maintain safe and prudent lane discipline with the adaptive cruise control and lane-keeping systems turned on. These are fair-weather features that you’ll most likely have to retire during the winter months.

Laying those minor quibbles aside, the 2018 Honda Accord 1.5T Touring is an impressive accomplishment for an automaker that only a few short years ago was still trying to find its mojo in a rapidly changing industry. The Touring comes across as significantly more car than you’d expect to drive home for its sub-$38K price tag, while at the same time avoiding the impression that it’s trying to push too far past its roots into the luxury sphere.

A devastating follow-through for Honda that completes the one–two punch begun with the compact Civic, the Accord Touring is perhaps the best example of what the word “premium” really means when shopping in the realm of affordable sedans.

About Benjamin Hunting
Benjamin Hunting is a freelance writer who enjoys keeping the shiny side up during track days. He is also an avid musician and a friend to vinyl.
Follow me
You may also like
7.6