If I owned Jeep, the first thing I would do is change the Compass’ name.

If you don’t need a larger vehicle, why haul one around all the time?

The vehicle that previously wore this badge was a mediocre little thing, a plasticky lump based on the Dodge Caliber. Overall, its most notable attribute was that you could get it for cheap. Other than its name, this new Compass has about as much in common with the old one as a Fiat 500 does with a one-ton Ram truck.

You’ll pay more for the new Compass over the old, of course, but overall, it’s worth the bump.

The all-new Jeep Compass was unveiled for 2017, and it rumbles virtually unchanged into 2018, except for some new features in its available SiriusXM: travel link, traffic information, and Guardian, which includes remote services and assistance.

The Compass comes in front-wheel drive on the entry-level Sport and next-up North. Both can be optioned to 4x4, the only configuration on the Trailhawk and my tester, the Limited.

It’s based on the same platform that underpins the larger Cherokee and smaller Renegade. All Compass models use a 2.4L four-cylinder engine cranking out 180 horsepower and 175 lb-ft of torque. The Sport can be ordered with a six-speed manual. Otherwise, you get a six-speed automatic when you order front-wheel drive, and a nine-speed automatic in four-wheeler models.

That was a bit too hefty a tag for my compact ride, but on the other hand, I also like that more automakers are now allowing buyers to load up smaller vehicles, if that’s their preference. It used to be that if you wanted more features, you had to buy a larger footprint. My loaded-up Compass felt as well-equipped as some Grand Cherokees I’ve driven, but without the bulk that our two-member family doesn’t require. If you don’t need a larger vehicle, why haul one around all the time?

The Compass’ little engine is fine if you’re driving moderately, but it gets wheezy when you ask it for more and run it out. If you want some passing power, especially at highway speeds, you put your foot down and then count a couple of beats while the transmission downshifts and then everything catches up. The nine-speed gets it up into the higher gears as quickly as possible for fuel economy, but at the same time, I thought it shifted more smoothly than a Trailhawk I tested last year. Perhaps a bit of extra trans tuning for the Limited’s more luxo feel?

Also, in keeping with fuel economy and emissions, the engine has a automatic stop-start feature, which shuts it off at idle, such as when you’re sitting at a light. You get a noisy, rough jolt when it starts up again, and if it’s too much, you can disable the system by pressing a button.

Despite its somewhat lacklustre engine performance, the Compass redeems itself with its ride. It’s wonderfully smooth and composed, soaking up bumps and coddling passengers without feeling detached or floaty. The cabin is very quiet, too, which adds to the overall higher-end feeling. Against the official figures of 10.8 L/100 km in the city and 7.8 on the highway, I averaged 10.1 L/100 km in my week with it.

The four-wheel system runs primarily in front-wheel, seamlessly transferring power to the back when necessary. A dial on the console lets you adjust the system to better tackle snow, sand, or mud, and you can lock it into power to both axles when travelling at low speed in the sticky stuff. My tester did fine in some heavy snow, but if you want more of the full Jeep experience, opt for the Trailhawk. It adds a “rock” setting and low range with a 20:1 crawl ratio, and while it isn’t as gnarly as a Wrangler, this trim level is far more off-road capable than you’d expect.

The Compass is a handsome beast that looks a lot like a scaled-down version of a Grand Cherokee. North trims and up include automatic headlamps, roof rails, and fog lamps; while the Limited adds rain-sensing wipers (which, like all moisture-sensitive ones, work great in steadier precipitation, but fizzle in drizzle, and aren’t as effective). My tester was further optioned with a dual-pane panoramic sunroof, at a wallet-draining $1,595.

The interior design is close to that of the larger Cherokee, and it’s as handsome as the outside, with lots of soft-touch materials, contrasting stitching, and curvy styling. However, not all is perfect. There are several controls stuffed into the centre console, with no room left over for storage. There’s a small covered console box and door pockets, but no place up front to casually toss your phone or other items. And while the climate controls are simple and intuitive, they’re set low in the curving centre stack. They can be tough to see and reach, especially if you have the seat set high.

There’s a decent amount of rear-seat legroom, but because the Compass is relatively narrow, three people across the rear bench can be tight. The liftover into the cargo area is low and it’s easy to load, and the rear seats fold flat for extra storage.

Jeep’s designers like to have fun, and as with their other vehicles, there are a few surprises baked into the design. Look in the mirror, and you’ll catch sight of the Loch Ness Monster swimming at the bottom of the rear window. And be sure to check out the foot rest, to the left of the brake. The dot-and-dash design on it is actually Morse code, and it spells out “Rocks Rivers Snow Sand”. (This is what you discover when you have an inquisitive husband who figured there had to be something more to an asymmetrical pattern.) 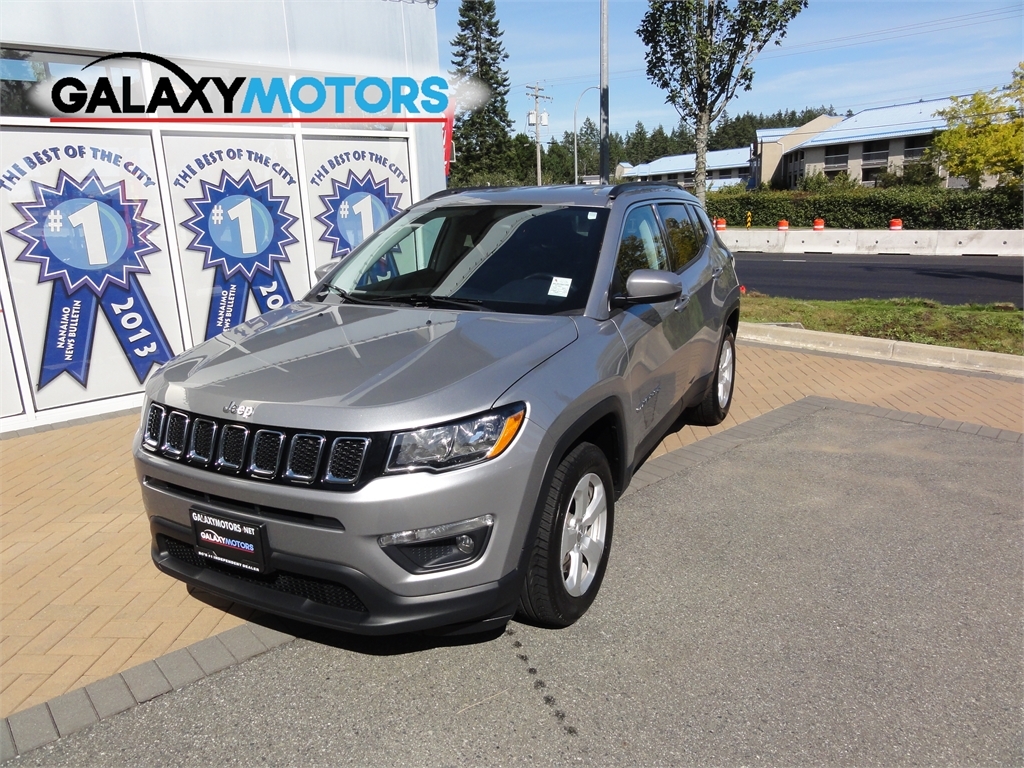 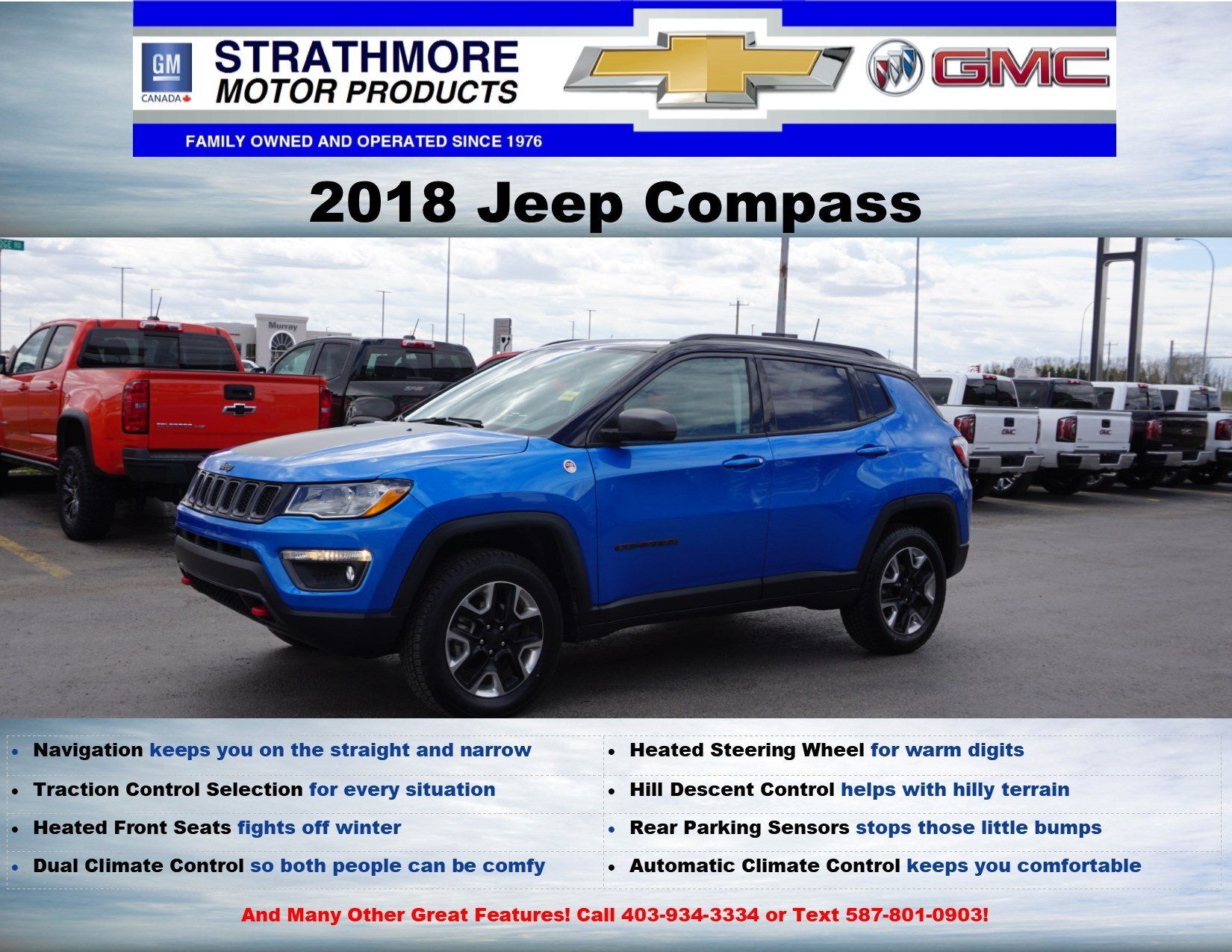 The Compass features Chrysler’s Uconnect infotainment system, one of the best in the industry for ease of use, and on my tester, it was upgraded to an 8.4-inch touchscreen (seven inches is the norm) with navigation.

It could use a bit more grunt to its engine, but overall, I like the Compass. It’s a handsome, nicely sized, smooth-riding machine, with a good-looking and comfortable interior. My tester was too pricey, but shave off some of its more expensive options, and you’ve got something that’s well-equipped without being too big.

About Jil McIntosh
Jil McIntosh writes about new cars, antique and classic cars, and the automotive industry. A member of the Automobile Journalists Association of Canada (AJAC), she has won several awards for her writing, including Journalist of the Year in 2016. In addition to testing new vehicles, she owns two from the 1940s.
Follow me
You may also like
7.9