Once upon a time, there was a cheap little car called the Hyundai Pony, and it was absolute sh– [Careful. – Ed.] …enanigans. Shenanigans. Ahem.

The Sonata feels quick as anything.

To be fair, the Pony was not actually all that terrible, merely disposable. Perhaps the worst thing about it was that any time a modern Hyundai is reviewed, the Pony must be trotted out for clichéd exclamations like, “Look how far they’ve come!” Well, no more.

Having recently returned from Korea, I can tell you that Hyundai is as far removed from the Pony as Commander Chris Hadfield is from a ladle of primordial ooze. The company is a powerhouse, up to its elbows in everything from fuel-cell technology to a standalone luxury marque. The Genesis G70 will come with a manual transmission. The i30 N hot hatch (likely to appear as an N version of the Elantra GT here) just spanked the VW GTI in various European outlets. Hyundai’s even up to speed on the autonomous driving front, with a LIDAR-equipped Nexo capable of navigating a multi-lane roundabout entirely by itself.

Anyway, here’s the Sonata, which will not be measured against a 1980s car manufactured from hairspray and leftover disco LPs, but against its contemporaries.

As a facelifted version of a slightly aging design, the 2018 Hyundai Sonata is relatively fresh, but nearing its best-before date. I expect you have a refrigerator drawer full of vegetables that are in much the same condition. The dark-chrome trim isn’t too overstated, though I could do without the line along the front hood. Further, Hyundai’s stuck a manufacturer plate to the back of this tester, which gets them out of having to put a front plate on it. Front plates combine with the current mania for huge grilles like a wedge of lettuce combines with the gap between your front teeth.

Overall though: not bad, though less pretty than the Elantra. Less impressive was the tendency for the left-side chrome exhaust treatment to pick up a sooty residue.

Moving to the interior, the Sonata builds on a roomy space with comfortable seats and an infotainment system built by a crack team of graphing calculator enthusiasts. The former are emblazoned proudly with “Turbo”, which gave your humble author a bit of a pause, as they are both heated and ventilated. Let’s keep the forced induction under the hood, please.

Having a button for nearly every function may just be a Hyundai/Kia attribute – the futuristic fuel-cell Nexo was much the same. On the plus side, there’s no need to go hunting through sub-menus to flip on the heated steering wheel; less good is the way the cramped line of buttons requires the driver to double-check before pressing. If you hate relying on touchscreens, you’ll probably find it perfect.

And, happily, if you’re a fan of using voice commands to manage audio and navigation functions while on the move, the Sonata’s system rarely makes an error. Further, it comes bundled with Apple CarPlay and Android Auto, making a case for the tech-head.

However, regarding technology, the Sonata is a bit of a mixed bag. There’s a rubberized induction-charging pad for your smartphone, but only a single USB outlet up front, and none for rear passengers. In an age when a family sedan must ensure that all members of said family (except the driver, hopefully) have their noses buried in screens, ignoring each other completely, the Sonata won’t do. Break out the I, Spy.

Traditional family sedan values like comfort and space are here in abundance, and the large panoramic sunroof really brightens up an otherwise grey day. Rear-seat space is very good, easily swallowing up a rear-facing child seat without issue. The trunk space is a cavernous 462 L, but I’d like to see more attachment points to keep groceries from sliding around.

One of the first sedans to transition away from a V6 to turbocharged four-cylinder power, the Sonata has plenty of responsive torque on tap. The direct-injection engine is quite noisy on start-up, and doesn’t ever really settle down to a level that could match a six-cylinder for smoothness, but it’s not lacking in power.

In fact, the low-end power that’s available in any of the driving modes is sufficient to impress pretty much any driver. A Camry has more peak power, but the Sonata feels quick as anything.

The six-speed automatic transmission is well-programmed, and there are paddle-shifters if you’d prefer. Left to its own devices, the transmission is quite bearable even in Eco mode – with peak torque coming in a broad swell at just 1,350 rpm, there’s not much need for lighting-fast downshifts.

The chassis, too, offers solid handling. There’s not a lot of communication coming through the steering, and the fresher Accord is a much better dance partner, but the Sonata isn’t a turbocharged sofa only good for straight-line runs. Grip is good, but it also handles transitions well, and for the kind of curving highway driving that a family sedan would most commonly see, the Sonata is a relative delight.

Just one more thing. While the Accord reigned supreme in that particular test, recent sales results seem to show that the Camry is edging ahead in the sales figures. Reason being, the Toyota has an edge in terms of incentives at the present (and is further bolstered by fleet sales). 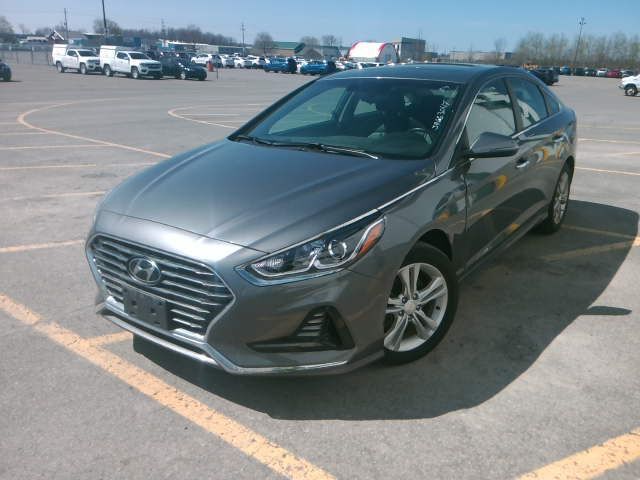 Perhaps there is something from that Pony ancestry we can take a closer look at: value. While the Pony wasn’t a ground-breaking machine, it was simply too inexpensive for Canadians to resist.

The Sonata isn’t cheap, exactly, but it undercuts the V6 Camry and the 2.0L Accord by several thousand dollars. It does so without compromising much in terms of power, handling, or quality. And if its interior ergonomics are a bit more conventional than the newer offerings, maybe that’s actually a boon.

Good enough to go head-to-head with the front-runners, and still something of a deal. Shenanigans no more.

About Brendan McAleer
Brendan McAleer is a Vancouver-based automotive writer, a member of AJAC and a ginger.
Follow me
You may also like
7.6