Toyota’s Camry has been and continues to be one of the best-selling vehicles around. Although the hybrid versions don’t sell nearly as well as the gas-swillers, they have long been a favourite of the taxicab clans and those who want to achieve the best-possible fuel economy while enjoying the charms of the does-basically-everything-right Camry.

The best Camry I have ever driven.

You may have seen Toyota’s commercials starring its new Camry. People often can’t believe that is the new Camry. “No more boring cars,” promised Toyota’s president, Akio Toyoda. Keeping true to his word, he has given Toyota’s design teams more freedom than ever before. The latest Prius is proof of that – although nobody in the world thinks it looks good. And the Camry that followed looked more daring than any Camry before it. The hyper-aggressive XSE trim they show in the commercials with its wicked snout and quad-exhaust rear end is certainly challenging public perception on what a Camry looks like.

But when you make your way to the hybrid Camrys, things get a tad tamer. Now, it’s still a very nice sedan, but it looks a bit less insane. And that is perfectly fine with me. The lines aren’t hugely different than what you’re used to, but everything is sleek, clean, and handsome. The car is longer (and gets an extended wheelbase), has a wider stance, and is lower. And it looks sharper overall. Except the grille. I’m not sure what’s going on there but all I see is venetian blinds.

The nicely appointed and spacious interior gets a new driver-centric design and clean, fluid styling. Toyota’s choice of materials is solid, with soft-touch (often stitched) panels and surfaces anywhere your hand falls (even the door trim is real leather!), and delightful, upscale textures on the plastics. An interesting touch is the swatch of plastic wood-grain-like material on the dash (which looks better than it should) and the ambient lighting below it – I ended up really liking this detail. All interior lighting is LED.

Sitting in the heated leather (which is quilted and perforated) seats, I found them to be reasonably comfortable but significantly firmer than expected – other passengers commented on that as well. As you might expect, there’s not a lot of supportive bolstering on them, which is just fine for this car.

The 8-inch touchscreen – with a fairly intuitive interface – handles navigation, phone functions, the outstanding nine-speaker JBL audio system, and Toyota’s latest Entune 3.0 system which lets you use a suite of apps like Yelp, control car functions from your phone, etc. Sadly, Toyota is still not offering Apple CarPlay or Android Auto in the Camry. The system’s voice recognition is extremely quick and accurate. Temperatures are handled by the dual-zone automatic climate control system and there is a standard-size sunroof overhead. 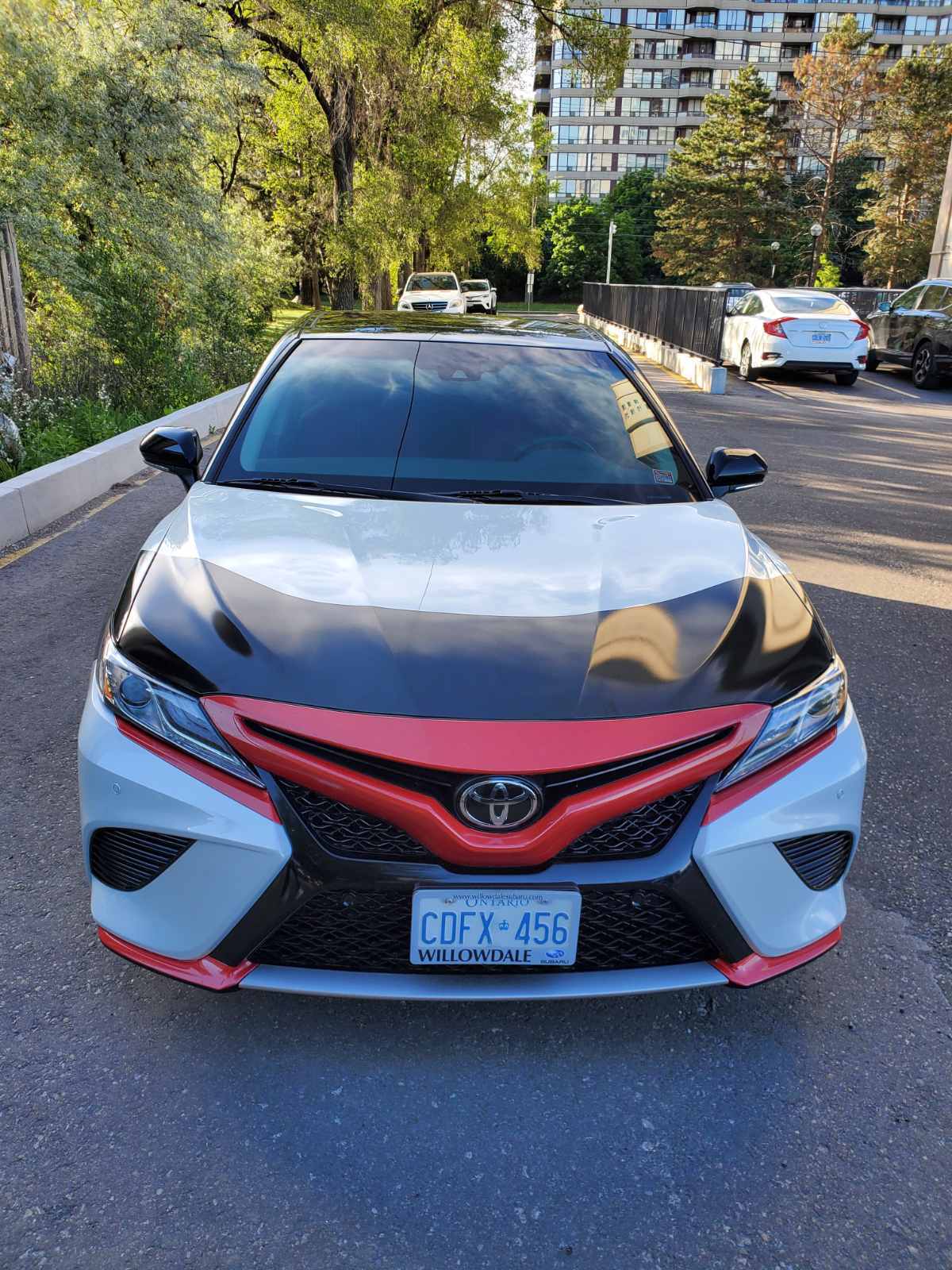 Toyotas come with a solid complement of safety stuff and this top-trim hybrid has a full whack of driver assistance technology. It includes blind-spot monitoring, rear cross-traffic alert and braking, parking sensors, surround-view camera (including the super-cool option to actively fly around the car from a bird’s eye point of view), automatic high beams, pedestrian detection, lane-departure alert with steering assist, and a very good configurable head-up display.

I loved the versatile storage area at the front of the console – it includes 12V, USB and auxiliary plugs, and a Qi wireless charging tray (which you can push in to reveal a storage bin underneath). There is also a carpeted bin under the armrest, where I found two more 2.1A USB charging ports.

The quilted, perforated leather seating continues in the back and it is very nice to look at. The two outboard seats are roomy with plenty of legroom and about an inch and a half of headroom to spare for me, at 5'10". The Camry is a wide car and the middle rear seat would be passable for an adult passenger, something that is pretty unusual.

There are a couple of adjustable air vents, but otherwise, you’ll find nothing else in terms of passenger convenience. There was not a single charging port to be found, and that’s inexcusable in a $40,000 sedan these days. If you’re transporting little ones, there are two sets of LATCH anchors for child seats.

The hybrid Camry’s real trump card is the trunk. Hybrids nearly always call for a compromise in trunk capacity. Not so here. The battery is under the rear seats and you’ll find a huge 427 L trunk that is ready to swallow up luggage and head for the highway. On top of all this, the rear seats even fold down in a 60/40 split, adding cargo space via a pass-through if you need it. It is incredibly irritating that Toyota doesn’t see fit to include an inside trunk handle, which means I was constantly getting my hands dirty with winter grime as well as getting hand prints on the trunk lid. Is it really that hard to add a little plastic handle inside the trunk lid?

Motivation comes from a 2.5L four-cylinder paired with an electric motor for a net 208 hp, which it sends through a CVT (continuously variable transmission) to the front wheels.

Toyota rates the hybrid Camry at 5.3/5.0 L/100 km for the city/highway cycles respectively. I averaged 6.0 L/100 km over the 442 km I drove the Camry Hybrid. There was plenty of city driving and it wasn’t too cold, so I hoped to fare slightly better than that, but that is still outstanding fuel economy. I recently reviewed the new Honda Accord with the base 1.5L turbo four-cylinder engine, in which I averaged 8.4 L/100 km – so the hybrid Camry got approximately 30 percent better economy.

The Camry has three drive modes – Eco, Normal, and Sport – each of which impacts its responsiveness. I found all three modes to be quite driveable. You can also put it into pure EV mode, which will keep things humming under electric power while it can. That doesn’t last long, as you might expect.

I found the hybrid Camry to be surprisingly sprightly, particularly off the line. And it will definitely hold its own in Sport mode. While it’s not a fast car, it never feels underpowered – I rarely found myself wanting for more power. Actually, it just feels much like a normal car and that liveliness is what I really liked about it. I occasionally forgot I was driving a hybrid.

The transmission also has a Sport mode, and you can manually shift “gears” which are pre-programmed ratios in the transmission. These are actually quite convincing and the “shifts” are quick, which makes it somewhat rewarding to use, even if it’s just for engine braking.

Of course the Camry’s ride is very smooth and well controlled, but I was highly impressed by the handling too. The car always feels very substantial, and I suspect the additional weight of the hybrid drivetrain’s components add to that planted feel. While I wouldn’t call it athletic, it feels very competent and more agile than I expected.

The engine makes quite a bit of noise when you really step on the gas, but otherwise, this hybrid is almost unbelievably silent. At highway speeds, with the gas engine running, this qualifies as one of the quietest cars I’ve ever driven, and that’s with winter tires. Wind and road noise are negligible.

The hybrid’s regenerative brakes are still grabby, especially at lower speeds, but as always, it doesn’t take more than an hour behind the wheel to get used to them and adjust accordingly. The visibility out of the car is mostly great, except the two outboard headrests in the back are quite tall and really impede rear visibility.

WAF (Wife Approval Factor) was pretty high. She loved how smooth everything was – the driving, the easy operation of the vehicle, and the electronics inside. She was also impressed by the beautiful seats.

Camry has always been the car that gets basically everything right. It’s never been exciting, but considering it was fast enough, comfortable enough, cheap enough, and more reliable than most, if not all, of the competition, it had a lot going for it. So it was never really a surprise that it sold as well as it did.

I would say Toyota has improved on the Camry in every way. Sure, these improvements are incremental, but every little bit makes a difference. The exterior styling is nicer, the interior is more upscale, the ride is better and the handling has improved. The hybrid has more power and better fuel economy. And it requires no compromise in trunk space.

I haven’t done the math for myself in terms of how long it would take for this car to pay for its hybrid premium. But if I had a little extra dough to spend, and wanted to eke out some pretty impressive mileage from a large, capable and comfortable sedan, the 2018 Toyota Camry hybrid would be on my shopping list. I think it’s the best Camry I have ever driven.

About Tom Sedens
Tom Sedens is an Edmonton-based automobile journalist and driving enthusiast, an accredited member of AJAC, husband, and dad. He is also a part-time pie evangelist.
Follow me
You may also like
7.9