The 2018 Honda Accord has arrived. It’s all-new. Hot off the line. The tenth-generation iteration of one of the most efficacious family haulers in the universe. The North American Car of the Year for 2018. The list goes on.

BMW fanboys may wish to skip the next line: I drove a $185,000 BMW last month with a HUD, and the Honda Accord’s is better.

Seems like Honda hasn’t yet mucked up the execution of an all-new Accord, and the latest unit proves no exception. For the next while, this latest model will carry Honda into the family sedan marketplace, and give competitors a bit of a headache, once again.

Accord’s recipe changes with each relaunch, as customer preferences and priorities change over time. For the latest, importance seems to have been placed on making Accord more ritzy and sophisticated than any predecessor, while dealing in plenty of easy-to-use technology.

Just a glance around the cabin reveals plenty of this. The instrument cluster is half-digital, half analogue. There’s an impressively wide touchscreen display mounted centrally atop the dash. Just a click or two, and you’ve got must-have Android Auto functionality onscreen – effectively upscaling key smartphone elements on the main display. There are even wireless charging provisions that can juice your (compatible) cell phone without plugging it in, via sorcery and witchcraft [or, you know, magnetic induction – Ed.]. Further, you’re practically tripping over high-output USB charging ports inside the thing. They’re everywhere.

Don’t miss the head-up display (HUD), which projects important information into the lower edge of the windshield, à la fighter jet. This HUD has crystal clear graphics with no light bleeding into the background from the projector, and it looks as sharp as a tack. BMW fanboys may wish to skip the next line: I drove a $185,000 BMW last month with a HUD, and the Honda Accord’s is better.

So, lots of new and slick and techy and complicated goodies. What’s not new, though, is much of the character of the elemental Accord cabin. Sure – it’s a new look, and a more upscale cabin than Accord’s ever seen. There’s unvarnished wood. An instrument cluster that wouldn’t look out of place in a Lexus. Gorgeous after-dark dash lighting. Heated and chilled seats.

Even small details impress, like numerous control buttons that actuate with the solid and precise click you’d expect in a pricey computer mouse. Little on board here would feel out of place in a much more expensive machine.

Functionally, Accord’s latest cabin is generously sized, each seat is easily entered and exited, and most notably, the back seats offer legroom and headroom aplenty for those of average height.

My family has owned seven Honda Accords. Unlike the older and smaller models, sitting in back of the new one doesn’t require having your knees smashed into your torso. And as is par for the course with Honda, the Accord’s interior is jammed with useful storage bins and compartments to keep smaller items in place and out of sight.

Just one cabin-related gripe, really: though tidy and elegant and formal looking, some drivers will long for more stimulation from the cabin’s shapes, colours, and overall design. The interior nails it for materials and storage and space, but hasn’t taken any risks where looks are concerned.

Do you like safety, peace of mind, and not crashing into things? Honda thinks you do, which is why their Honda Sensing system is constantly slathering the world around it with more radar waves than an air traffic control centre, analyzing surroundings for potential hazards. These include elevated collision risks, cars hiding in the blind spot, or accidental exiting of a lane without a signal. The Accord can even steer for you.

Any more self-aware, and you’d have to give it a name. I called the tester Norman.

If it’s been a good long while since you’ve purchased a new car, you may find all of the new gadgets, and especially the safety-focused ones, a little overwhelming. But fear not: Honda built clever little tips into the instrument cluster’s digital display, which pop into action as you operate and activate certain features. Adjust the HUD, and a message appears with further instructions. Activate or disable a safety system, and a little infographic and description pop up, too.

Even if you have sausage-fingers and accidentally smash an unfamiliar button, chances are the cluster will explain what’s just gone down. It’s all ultra-techy, but far from daunting to use.

Technology is well applied elsewhere, too. The back-up camera, for instance, provides a clear image, decent resolution, and uses an ultra-wide camera lens for a clear view down both sides of the laneway or roadway you’re backing into. The potent LED headlights, which are standard on all trim grades, are top-notch. Usually, I expect this sort of colour, spread, and saturation of forward lighting in a BMW or Cadillac. Rejoice! Even your base-model Accord comes with a magnificent lighting system.

Effortless, comfortable on the road

And finally, the tech under Accord’s hood. The tester’s powertrain was comprised of a 1.5-litre turbocharged four-cylinder engine, a continuously variable transmission (CVT) and front-wheel drive. Output from the little turbo four is rated squarely at 192 apiece for both horses and torque, and the latter figure arrives in full by just 1,600 rpm.

Compared to a larger four-cylinder engine with similar output and less twist, Accord’s engine spends much more time at much lower revs where it’s quieter, more efficient, more refined, and very responsive. The CVT transmission works hand in hand with the torque-rich engine, keeping revs low and steady during most driving. Put simply, driven the way most drivers will drive this car most of the time, the powertrain is responsive, but also virtually invisible.

Honda Accord Sedan available on autoTRADER.ca 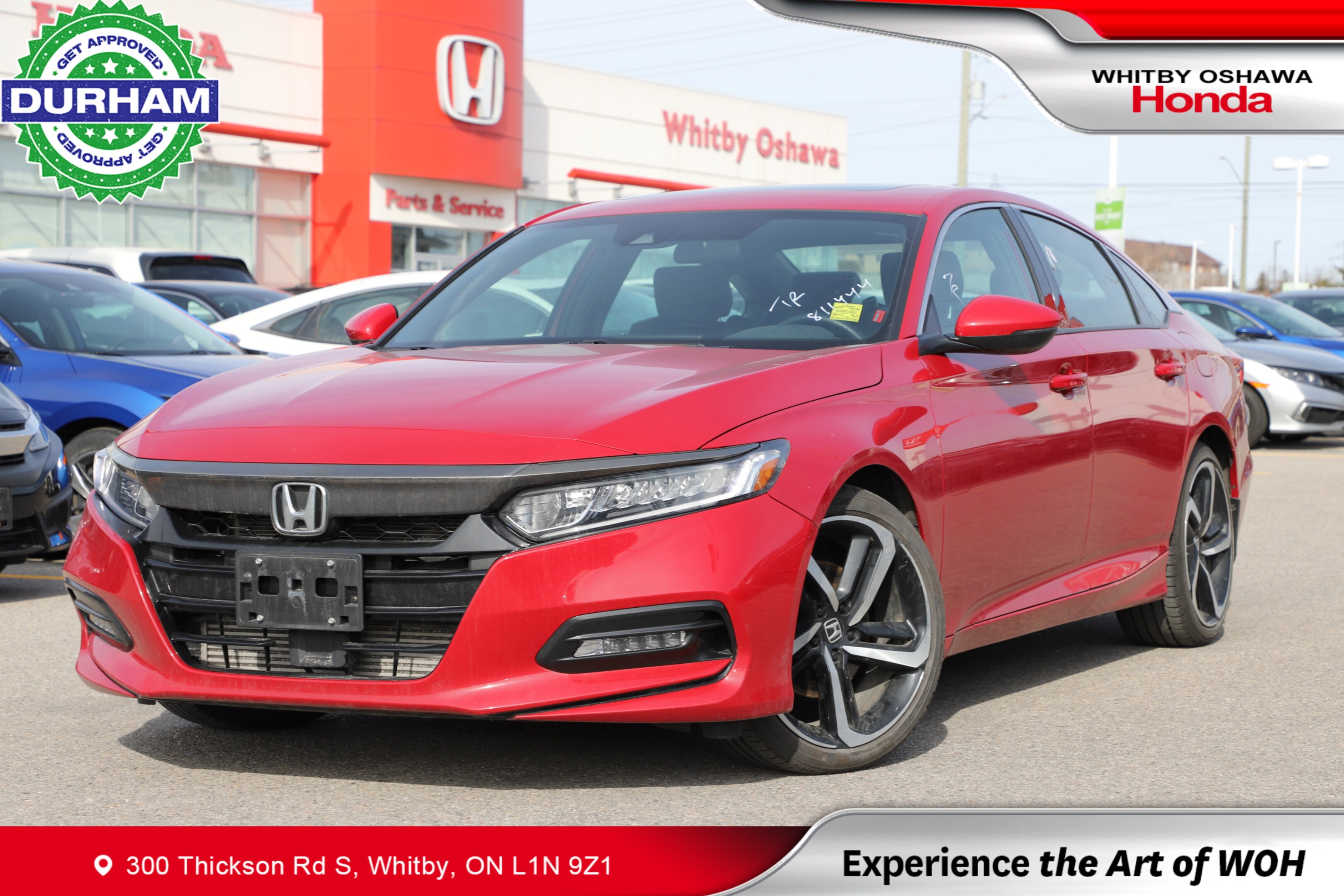 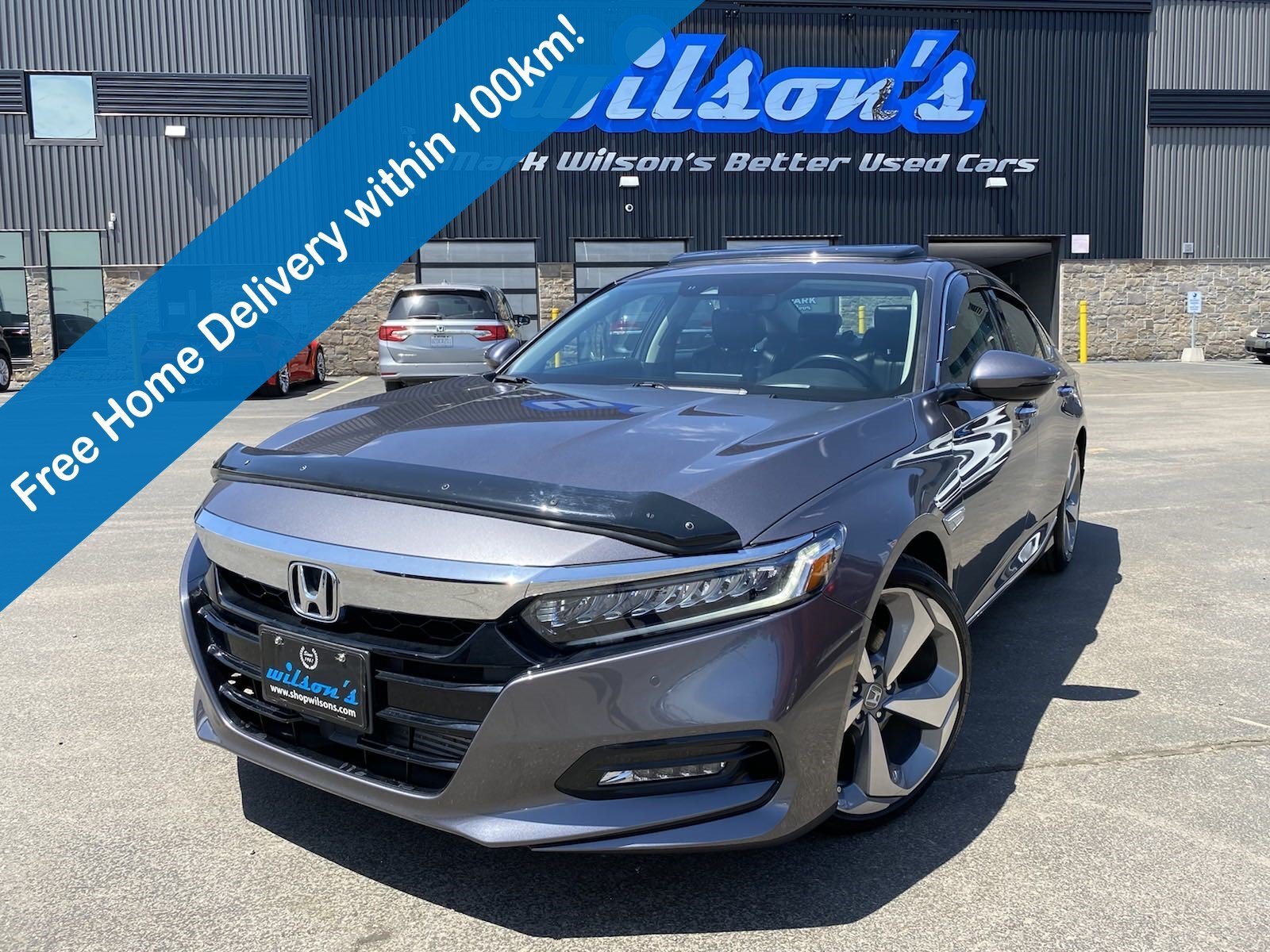 If you’d rather eat an energized bug-zapper than drive an automatic, there’s a six-speed stick available, too.

Generous low-end torque glides the Accord up to speed in quick order when requested, and the sound is a pleasing and smooth hum when the engine gets worked harder. Still, Accord’s new engine and transmission combination is most impressive for how quiet and effortless and virtually invisible it is when you’re driving it in no particular hurry.

If you’re comparing, the Toyota Camry’s new four-cylinder engine is still asleep at low revs where the Accord’s boosted engine gets hauling. The Toyota mill typically operates with more noise and more revs to achieve the same acceleration as the Accord, even if the Camry sounds better when pushed.

The tester rode with a clean balance of sporty and comfy. The shocks are slightly firm, but with a zone of smoothness around the edges ensuring the ride is never jarring or jagged, and that it rarely bangs into bumps. It’s a comfortably athletic ride that wouldn’t feel out of place in a luxury sport sedan. Interestingly, the stand-out sensation is actually the rigidity of Accord’s new body structure: whack a wicked road-crater, and the car feels incredibly strong and rigid, dense, and durable to the nines.

Brakes dole out strong bite from the first bit of application, and the action at the pedal is nearly sports-car precise, but not too touchy or nervous. There’s plenty of peace-of-mind delivered when you’ve got to pull down to a stop in a hurry.

At lower speeds, Accord’s steering is feather-light, easing maneuverability in tighter spaces or while zipping through city traffic. At highway speeds, the steering heavies up a touch, helping the car stay centered in its lane more easily, even in strong winds.

All said, the latest Accord stacks up, once again, as a solid machine with many strengths and few weaknesses, even if it still has three problems.

First, my nicely loaded Touring-trim tester will relieve shoppers of the better part of $36,000, and that’s not even with the higher-output 2.0L turbo engine that’s replaced the much-loved V6 in the lineup.

Second, this is not a fantastic-looking machine. The wheels are sexy, but the rest of the package looks a bit incoherent, clumsy from some angles, and worse, incorporates touches too heavily inspired by recent competitor products. The Accord isn’t frequently bought for appearances, but still.

Third, highway noise levels were higher than I expected in a machine at this price point when cruising at a decent clip, though the tester’s mounted winter tires may have been partly to blame here.

Still, ultimately and once again, this machine should be considered a priority test drive for those in the market, and especially, for those after some of the best safety and powertrain tech currently on offer in this segment.