Do we even really need a centre stack screen in cars anymore? Did we ever really need one to begin with? Audi’s Virtual Cockpit certainly makes the argument that you can live without one. The 12.3-inch, 1,440x540 pixel, high-resolution screen transforms the instrument cluster from a simple information device into a stunning mobile command centre.

If every gearbox in the world were as effortless as this one, nobody would have bothered trying to make CVTs work.

Add in the fact the Audi MMI’s main 8.3-inch screen can be retracted without turning off nav or audio and the 2017 Audi Q7 Technik suddenly develops one of the most elegant interiors in any car, anywhere.

That entire virtual cockpit instrument cluster can be controlled easily by a solid, well-textured, and well-weighted scroll wheel and button set on the left-hand spoke of the steering wheel. If you’re in the car on your own, there’s really no need to use the MMI system at all. In our $95,295 as-tested Q7, I left it almost entirely alone.

For passengers (or traditionalists), the screen is controlled by an easy-to-use control puck, and a remote touchpad interface. You can even draw letters and numbers to input into the navigation or contacts. Many dislike the “stuck-on tablet” aesthetic – which is why it’s such a positive this one can be retracted – but as someone who drives many different cars, I can assure you that a high-mounted screen like this makes it much easier to glance at, and more than halves the time spent refocusing on the road. It’s the ultimate function over form.

For this Audi system’s final trick, you can connect your phone and use Apple CarPlay and Android Auto. Why are these systems better than the car’s own interface? Because Siri and Google are six times better at voice recognition than the car will ever be.

You can have instant voice access to your calendar, the weather, the news, your music, your podcasts, and even random information like “What is the definition of esoteric?” My daughter loved to shout “Okay, Google” from the backseat, and ask Google questions like “How smelly is my Dad?”

For the record, the answer is, “I’m sorry, I don’t know how to help with that yet.”

I like Android Auto because it will read my messages to me, and let me or my passenger respond with voice. Also because while I’m driving I can simply shout “Tim Hortons” and be instantly navigated to the nearest Tim Hortons. Or have Google search for my doctor’s phone number, and then call them.

We spend an increasing amount of time in traffic these days, and the desire to make that hour or two a day seem more productive is strong. Using your device while driving, though, is utterly unacceptable. Not to mention that half the reason the commute is so long in the first place is distracted idiots crashing into each other while frantically thumbing through their contacts. Voice commands in native car interfaces haven’t worked. Voice commands in phones have. That’s why I love Android Auto.

But even the Audi native systems for navigation and media are solid. The computing power is more than adequate, with quick responses and no lagging or hangs.

And again, all of this functionality is displayed in vivid style right there, right in front of your face – controlled without moving your hands from the wheel. I think that Audi’s Virtual Cockpit might be the best execution of an instrument cluster display on the market. I only wish Audi’s excellent 360-degree parking camera was displayed in the cluster. You need the screen for that.

If this was a technical review, we’d stop there. But this is still a car, after all. A big one. With three rows, seven seats, and a stonking great 3.0L turbo V6 engine in it. This is an Audi, so that V6 teams up with an eight-speed Tiptronic to turn all four wheels. Use hefty levels of foot pressure and you can haul its substantial 2,240 kg to 100 km/h in a ridiculous 5.7 seconds.

My sting at the petrol pump was forgotten instantly, as I once again used the Q7s robust-yet-smooth grunt to surge into a gap in traffic.

If every gearbox in the world were as effortless as this one, nobody would have bothered trying to make CVTs work.

Adaptive air suspension and four-wheel steering give the Q7 far more composure than you’d expect, all courtesy of the $3,900 Dynamic Ride Package. On the road, Audi’s ability to tune out noise, vibration, and harshness is spectacular.

Want more pampering? Our tester also got Valcona leather, massaging function for the front seats, and power door closers. Because why use your arms like a savage when the $3,750 Luxury Package can shut the door for you?

I mentioned this is a seven-seat, three-row unit. Sadly, the middle row is a bench seat only – I prefer captain’s chairs, but the folding function is easy to use and fast, and gives easy, wide access to the two rear seats. I support Audi’s decision to only put two seats back here. It makes for more shoulder and hip room. Knee-room in that back row is reasonable, as is headroom, and adults can be sent back there for moderate-distance rides.

The middle-row seats feature an easy-access LATCH anchor set for the kids seats, which you get to by pulling gently on a small, thin cushion between the seats.

The rear door sunshades are manual, I’d like to have seen them integrated as power units as on other luxury cars, so they can be powered by the driver, and they’re also $250 options.

Other options are the $500 grey oak inlay, and $5,100 Bang and Olufsen Sound System. That system is worth it for true audiophiles, and for those who love the theatre of the gorgeous tweeters rising from the dash on start-up – but for me I’d forgo it. 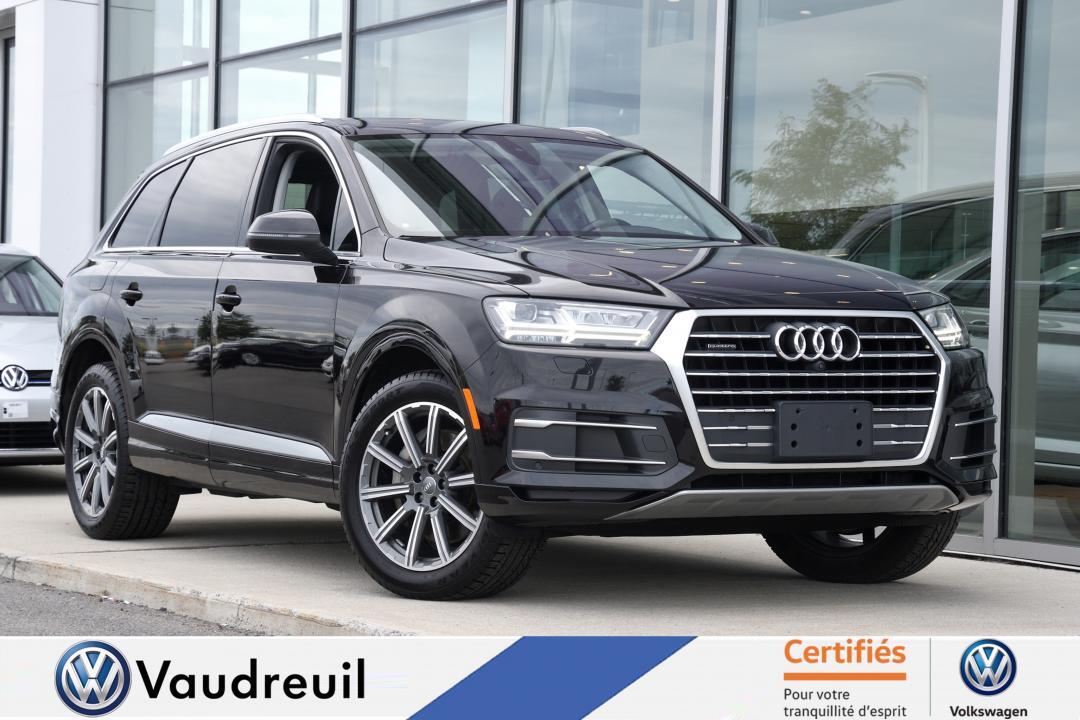 No option package gives you a space to store the cargo cover, which is the only gripe in that department. The seats can be power-folded from the back, and you can also raise or lower the car from the cargo area – making it easier to load and unload. With 419 L of cargo volume behind the third row, 1,061 behind the second, and 2,027 with them all flat, the Q7 is a bit of an Ikea-run champion. All those seats fold fully flat.

The execution on this Audi Q7 is its biggest asset. The flaws are miniscule and minor in nature. The entire piece comes together with the same robust smoothness of its engine. Its ability to coddle occupants without losing capability is surprising, and impressive.

And it comes with an appropriately impressive price tag.

About Jacob Black
Jacob is a writer and a journalist who enjoys cars, driving and jokes. Sometimes he writes a series of jokes and loosely connects them to a car he was driving. Jacob Black is not a werewolf.
Follow me
You may also like
7.8