From time to time, a car comes to the Canadian market that would be a great fit for certain buyers, but they overlook it simply because it doesn’t get a lot of attention.

If you’ve always wished you could have a BMW that’s more compliant over uneven roads, this might be the one you’ve been waiting for.

The new BMW 6 Series Gran Turismo could be one of those cars. We’ve all gone so SUV-mad that some people might see this four-door tourer and dismiss it outright as not being in line with what they’re looking for.

Granted, it’s a particular type of consumer who will consider this the perfect car. But if your wish list has you seeking something that’s high-end, spacious, comfortable, and a little taller than the average wagon but shorter than an SUV, then you might want to make time for one more test drive.

This 6 Series GT replaces the previous 5 Series GT and is the first 6 Series car built on BMW’s new modular platform, which it shares with the new 5 Series and 7 Series as well as the upcoming X3. (Does that mean that a new 6 Series Coupe and Cabriolet are in the works as well? We don’t know yet – BMW isn’t ready to say either way.)

Much of the toolbox that its designers pulled from therefore comes from the new 7 Series, which doesn’t take long to discern at first glance. The wheelbase is the same between both cars, as are the proportions of the grille and headlamps. The main differences appear behind the B-pillar, where the traditional coupe body-line pulls the rear windows into a more elongated shape and adds some heft above the taillights to make room for the active rear spoiler.

Inside, the real wood trim and available quilted Nappa leather seats are in line with the rest of BMW’s newer products (read: impressive). The seats are comfortable and supportive with lots of give to be had through adjustments, including in the hip supports, and a massage function is available as part of the Premium package ($6,500). The cabin is very spacious in both the front and back rows – the latter having seats that are both heated and reclining as standard – and the panoramic sunroof lets plenty of light pour in.

The only two design-related downsides I noted on this test drive are that the storage bin in the centre console is relatively small and rearward visibility is relatively impeded through the coupe-line back window, though not oppressively so.

If you’ve always wished you could have a BMW that’s more compliant over uneven roads, this might be the one you’ve been waiting for.

The powertrain in the 6 Series GT is also from the 7 Series toolbox: a 3.0L twin-turbocharged inline-six-cylinder engine paired with an eight-speed automatic and standard xDrive all-wheel drive. Other markets will have different variants available, but this is the only one we should expect to see in Canada.

The engine produces 335 hp and, thanks to the twin-turbo setup, 332 lb-ft of torque over an impressively wide rev band, from 1,380 to 5,200 rpm. It runs beautifully smoothly, and throttle response is quick and sharp. This car is also equipped with active grille shutters to improve aerodynamics (and therefore fuel economy) when the engine needs less cooling.

Four drive modes can be selected: Comfort, Comfort Plus, Sport, and Eco Pro. The differences between Comfort and Comfort Plus are subtle and are achieved through softening the steering feel through the available integral active steering system and the standard front and rear air suspension. Both modes felt a little softer than most BMWs I’ve driven and somewhat more so than I typically enjoy – but if your preference is for a compliant suspension, this might be great news. In Sport mode, shifts get livelier, steering sharpens considerably, and the chassis lowers and firms up. This is the setting where I preferred to spend most of my time.

The active rear spoiler lifts at 120 km/h to add downforce to the rear axle and reduce drag, and it lowers again once the car’s speed drops below 80 km/h. It can also be raised or lowered via a button on the centre console.

A large and detailed head-up display is included as standard equipment.

The 6 Series GT’s liftgate opens up to reveal 610 L of smartly laid out cargo space. The load floor has been lowered by 5 cm, and a rear suspension borrowed from the 5 Series Touring delivers a wide and usable compartment. Both segments of the cargo cover can be removed and stowed under the cargo floor when they’re not needed, and the 40:20:40 rear seats can be dropped with a button from the trunk.

The infotainment system here is the same one used in other new BMW products. The 10.25-inch screen can be interacted with using touch, gesture controls, voice, or the brand’s traditional large dial in the centre console. Apple CarPlay functionality is available (though not Android Auto) as part of the available Smartphone Connectivity package ($750), which also tacks on a wireless charging station and a SIM-card-driven in-car Wi-Fi hotspot. 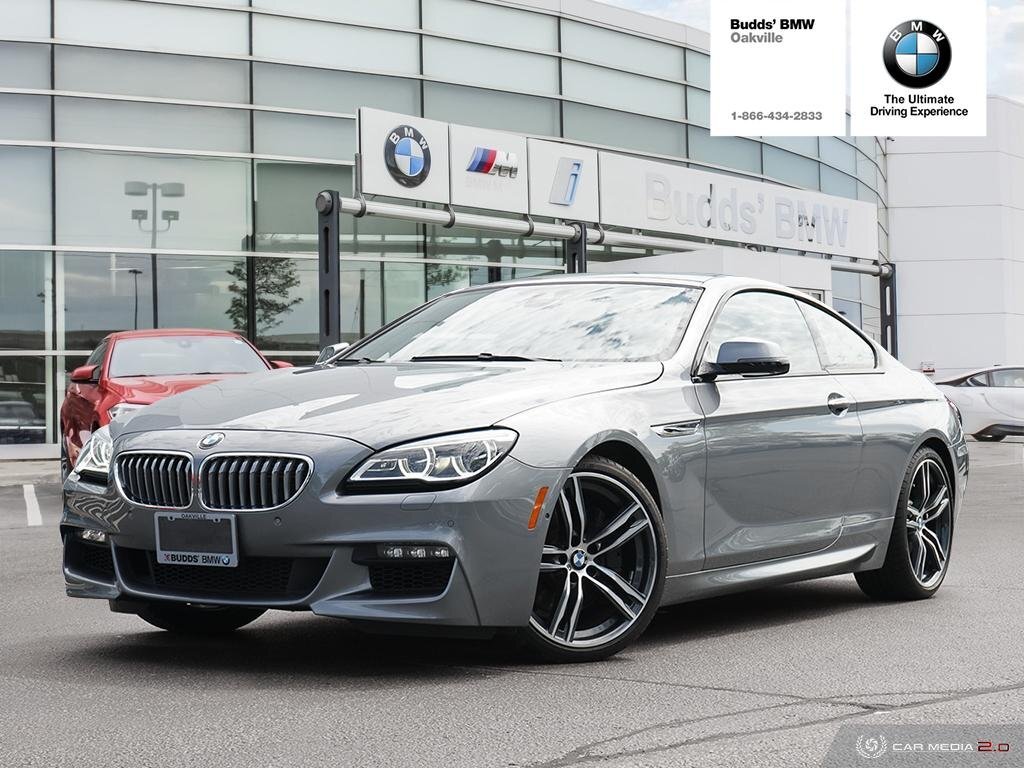 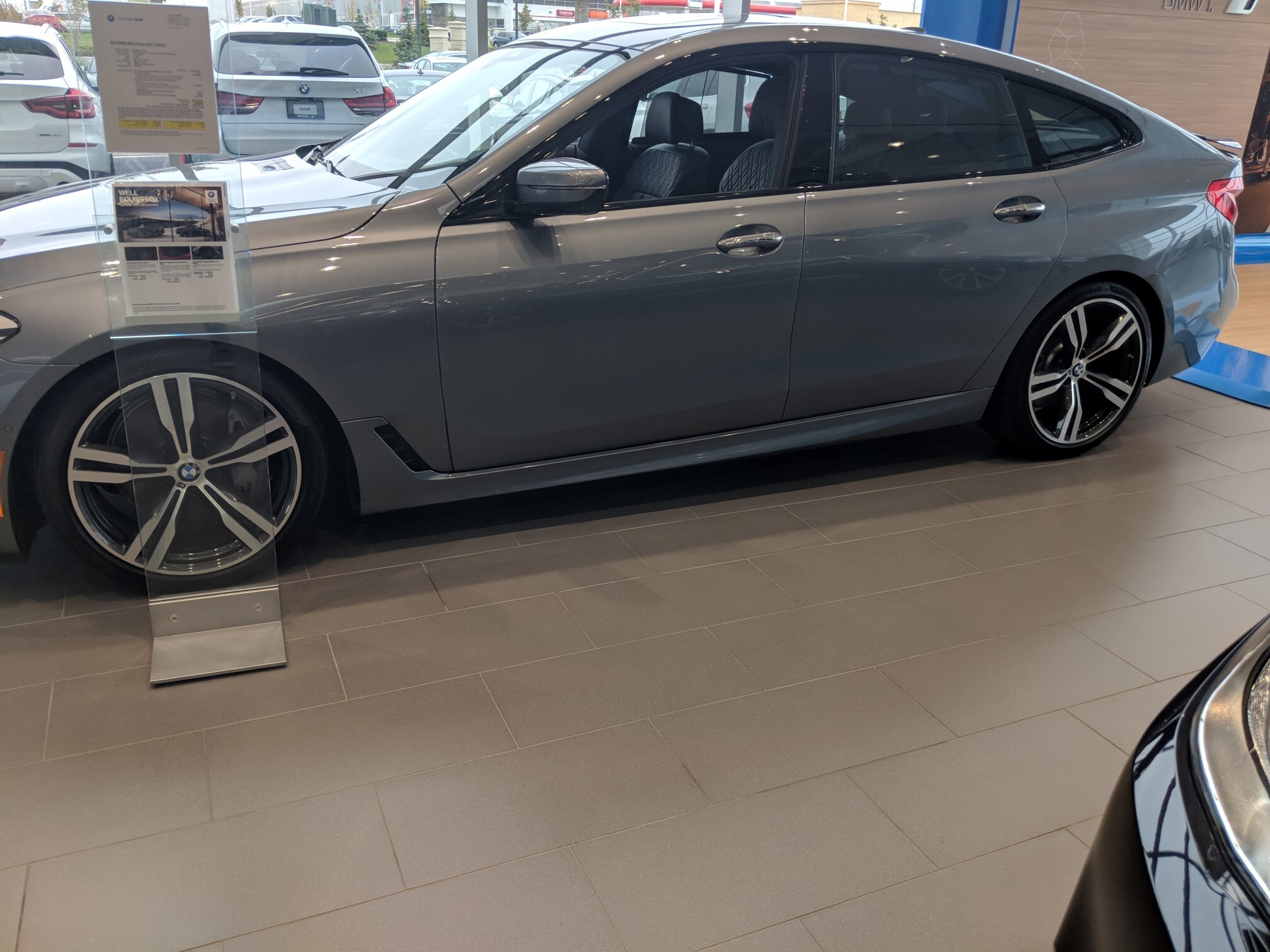 The new 6 Series GT starts at a Canadian base price of $76,700 and benefits from a simplified pricing structure: most of the features that are typically bought together are bundled into packages (the aforementioned Premium, Smartphone Connectivity, and Advanced Driver Assistance, plus the Dynamic Handling package at $4,900 and Remote Parking at $1,500). A handful of features are selectable separately, including a Bowers & Wilkins surround sound system ($4,900), rear entertainment system ($2,500), and night vision with pedestrian detection ($2,500).

Expect to see these begin landing in dealerships before the end of 2017.