My right foot forces the accelerator hard against the firewall. My left hangs precariously off the side of the brake pedal, listening for the “pop” of the engine soft-cut that lets me know I’ve built the required 6.4 psi of boost pressure in the supercharger. The car, arrested by launch control, hunkers but doesn’t creep. The little bar on the instrument cluster flashes up 1,500 lb of brake pressure right as I slide my foot off the side of the pedal.

The back end squats, the front extends every millimetre of travel and the 2,433 kg SUV surges forward in a cacophony of tortured tire, screaming, whirring supercharger, and thunderous exhaust.

For 3.5 seconds I weigh 110 kg as we pull 1.4 g – at the end of that 3.5 seconds we’re travelling at 100 km/h and my co-driver is urging me to brake for the impending turn. As I peel myself out of the seatback I smile so hard it cracks my sunburned cheeks. Had we had a full quarter-mile to play with, I’d have reached the end of it in 11.6 seconds. Had we longer, I’d have seen as much as 290 km/h.

Were there an obstacle in my path, I’d have been able to wipe off 100 km/h of speed down to nothing in a short 35 metres.

In an SUV. A domestic SUV; from the brand known more for its cheerfully rugged off-road poster child, the Wrangler, than for brutalizing tires and racetrack tarmac. Sure there were SRT Jeeps before, but this is different.

This is the 2018 Jeep Grand Cherokee Trackhawk. You’ll know the Trailhawk name as Jeep’s way of identifying their most capable off-road vehicles – this is the same concept, only on-road. Or track, as the case may be.

You'll recognize this number too: 707. It’s the amount of horsepower produced by the 6.2L supercharged hemi V8 Hellcat engine. But “Hellcat” belongs to Dodge, hence Trackhawk. Marketing is funny like that. There’s slightly less torque (645 vs 650 lb-ft) due to the restrictive path of the bespoke exhaust system needed to shoehorn this engine into this Grand Cherokee, but as the SRT engineer said to me at breakfast… “I challenge you to feel that difference!”

At $109,995 it’s the most expensive of the three vehicles that get this powertrain, and it’s the only one (currently, anyway) that shuffles those palindromic horses and pound-feet out to all four wheels. But the Jeep is by far the most refined of the bunch.

Some of us were heard moaning about the quietness of the Grand Cherokee Trackhawk – even with a resonance chamber amplifying the exhaust noise in the cabin there isn’t an awful lot of it. And at normal speeds you can easily have a conversation with your co-driver. A two-stage exhaust valve à la Porsche might allow for more aural intensity, but Jeep figures this demographic will appreciate the muted understatement.

Understatement is the order of the day for the styling department too. In fact there are only five ways to spot a Trackhawk versus any other Grand Cherokee SRT.

It’s as muted as a 707 hp performance SUV could possibly be – even the hood is the same as the regular SRT, with understated vents that you’ll only notice if you’re particularly tall. The supercharger sucks its 30,000 litres of air per minute via a tube mounted where the foglight would be on other models. It’s low, and forward, and Jeep had to create a small gap in the ducting for water to escape should you accidentally give your Trackhawk a bath in a puddle. But over and above everything, it’s almost imperceptible.

One thing that’s not imperceptible is the focus SRT has put on making sure this Grand Cherokee brings agility to match its engine. Off throttle and under brakes the Jeep is hilariously tail-happy, the extra 118 kg of supercharger up-front plus stiff suspension and pointy chassis tuning conspiring to introduce the side of the car to the apex every time. It will respond well to mild throttle or brake inputs, and a skilled driver will have fun balancing the Grand Cherokee right at the limit of adhesion.

I was surprised by how much throttle it could accept while still under steering load too. Wind on the juice rapidly in Track mode and the tires will squawk, but the electric limited-slip rear diff will help straighten out the chassis and fire you down the track with jovial aggression.

A likely factor in the Trackhawk’s ability to accept big throttle inputs is the single-speed transfer case. It allows just 60 percent of torque to the rear wheels in Sport mode, and only 70 percent maximum in Track mode.

The steering is not as communicative as the seat base, and I admit to chasing the Trackhawk a little at some of the tighter sections of the Club Motorsports circuit in New Hampshire. Turn-in is more rapid than I expected too, causing me to have to unwind and re-adjust my steering inputs more often than I’d have liked my colleagues to notice.

Not that I was ever in strife. It’s more that the Trackhawk’s track mode (accessible with a drive select button or the fantastic Uconnect system’s SRT Performance Pages) allows the car enough room to play, but not quite enough rope to hang itself.

And if everything else goes pear-shaped, you can stomp on the left pedal. That will bring the six-piston Brembos on each front wheel into contact with a monstrous 400 mm rotor, and the four pistons on each rear wheel to bear on a 350 mm rotor. The initial bite from the brakes is strong, and I experienced no fade during our track sessions. Worth noting: the brakes feel a little soft underfoot, even as the Trackhawk seatbelts leave bruises on my chest. More feel in the pedal would be nice, though I can’t fault performance.

Perhaps those brakes have been tuned to make the Grand Cherokee feel a little less like a brute on the road, because it really does feel genteel in regular use. Adaptive dampers tuned specifically for this application make for an energetic ride on the track, but a surprisingly compliant and clean ride on the road. Small bumps are nothing, medium bumps a doddle, and even larger road imperfections are summarily dispatched.

The Trackhawk allows plenty of conversation between the cabin occupants, and lets in only a modicum of wind noise through the top half of the side windows. Road noise is negligible, and engine noise is unobtrusive too (though I’d like to see more of the latter).

Our unit for the day was fitted with the optional red leather seats, which is the option to choose if you believe that subtlety in all forms is evil and that red engenders passion. I prefer the tan leather myself, and all of the options get the Trackhawk embossing. They’re comfortable over a long distance and reasonably supportive, but could use more hip bolstering.

All Trackhawks get the top-tier 8.4-inch Uconnect touchscreen and digital instrument cluster combination. This system is now powered by upgraded hardware to make the already brilliant graphics more vibrant and slick, plus it now gets Android Auto and Apple CarPlay. Uconnect is the single best infotainment/human–machine-interface system in the industry now. Bar none. It’s that good. 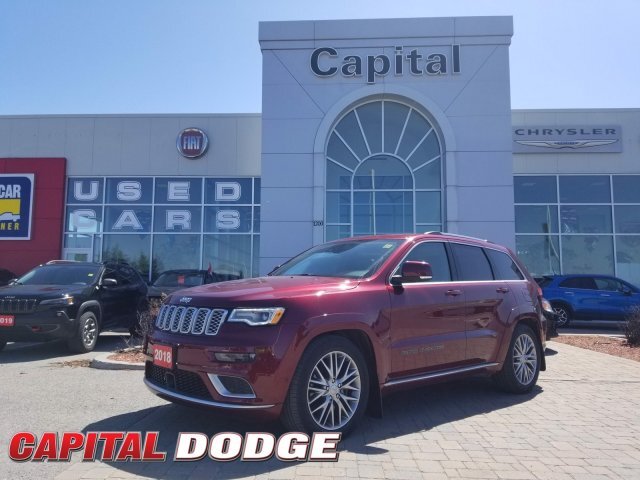 The flat-bottomed steering wheel with the Trackhawk logo embedded in the base is a great touch, as are the aluminum pedals. The cabin feels as special as you’d expect, and it’s as spacious as you’d hope. The cargo area is the same as every other Grand Cherokee – generous. Seats-up you’ll find 1,030 L of cargo space. Fold them down? 1,930.

And with 7,200 lb (3,266 kg) of tow rating you could theoretically use a Trackhawk to tow your Dodge Demon to the track on Fridays.

One thing that I noticed was a lack of obvious Easter eggs. Jeep is known for fun little details, most obviously the little Willys Wrangler often found in the detailing around the front and rear windows. You can bet they’re there though, so have fun looking for them.

Anything with this much oomph begins to raise the question of reliability, and so it’s no surprise you can’t actually engage Launch Control until the car has run for 500 miles (800 km). Additionally, every Hellcat engine is put through a 42-minute dyno run while still on the line to dial out any potential issues.

Jeep also had to do some work to the Trackhawk underpinnings to handle the extra power. The rear driveshafts have been up-sized to handle the extra grunt, as has the single-speed transfer case. Even the diff housing is bigger and meatier, and now mounted by four points instead of the three-point mount found in the “regular” SRT.

The transmission actually shifts slower at the track and in launch control mode – a system Jeep calls A-Max shifting. The rationale here is that you’ll want maximum torque streaming through the powertrain at all times in order to facilitate max acceleration. By slowing down the shifts, the Jeep engineers were able to keep power flowing through gear changes, without having to do a hard cut of engine power.

Quadratrack is also disabled in Launch Control mode. Quadratrack is the system that meters torque front and rear based on the computer’s prediction of wheel slip. It reads the steering lock angle, yaw rates and throttle input to predict wheelspin and shuffle torque front or back, and manages the rear diff lock. In launch control, torque runs 50/50 and the rear diff is fully locked, no matter what.

Launch control is cancelled by any amount of wheel lock or by releasing the brake before going to full throttle. You need to be on throttle long enough for the supercharger to build pressure, which it does by cutting fuel to the cylinders while it waits for your command to launch.

If you forget to press the launch control button, as one of my colleagues discovered, you’ll stand on the brake, stand on the throttle, and do a hilarious, entertaining, tire-frying, Jeep PR-angering brake stand. I wish I’d tried it. “It was an accident... honest!”

Jeep wouldn’t tell us exactly how many of the Trackhawks will be made, but say more than half the first year’s production is already accounted for. And you can bet a fair few will make their way north of the border. In Canada, SRT currently represents about 10 percent of Grand Cherokee sales. That compares well to the US, where the number is only two percent.

The $109,995 Jeep Grand Cherokee Trackhawk is built in Detroit and will be delivered to its first customers in October 2017.

About Jacob Black
Jacob is a writer and a journalist who enjoys cars, driving and jokes. Sometimes he writes a series of jokes and loosely connects them to a car he was driving. Jacob Black is not a werewolf.
Follow me
You may also like
AdChoices
Latest Articles
﻿