The 2017 Chevrolet Camaro four-cylinder is the beginner’s pony car.

There has never been a turbocharged Camaro.

Is it, though? I don’t mean “Is it a car for ‘beginners’?” – the bigger question is whether we can classify a Camaro powered by a four-cylinder, turbocharged 2.0L motor a “pony car” in the traditional sense of the word. Many would agree that the only things this particular Camaro has in common with its forebears is certain retro styling cues – but even these have been reduced for this sixth generation – and rear-wheel drive.

Then again, maybe it’s time we switch our focus from what we traditionally knew to be true, to what’s bound to become ever more so as emissions crackdowns continue to stiffen, as CAFE continues to rule, and people become increasingly weary of plopping down big money to feed a gas-guzzling V8 the fuel required to allow them to continue to mash that go pedal and unleash hell. It’s a new day in so many parts of the car world, and the pony/muscle car world was not going to be able to stay immune forever.

Heck, in the months leading up to the latest Ford Mustang’s arrival in late ’14, all the talk was about how it was going to be getting turbocharged power for the first time in eons. In the case of this Camaro, it’s even more noteworthy as there has never been a turbocharged Camaro – it never got the 301 turbo V8 its Firebird cousin had – though there has been a four-cylinder Camaro. It made a colossal 90 hp and freight-train-like 132 lb-ft of torque but before you laugh, know that V8-powered cars of the same year made do with just 165 hp. You can see, then, how the need for downsizing felt by GM even then was already on its way to dissolving whatever race-car aspects were left from a model that had originally been built to go racing.

Well, this latest four-cylinder Camaro is a departure from all that. For starters, it makes 275 hp and 295 lb-ft of torque, figures that aren’t that far off from what the V8 Camaros were doing a couple of generations ago. Those are the numbers, but in addition to all that, it pays to step back and consider what this latest entry-level Camaro (there’s no V6 option) actually looks like.

Especially with our car’s optional 20-inch blacked-out wheels, it looks chunky, brash, and muscular like a Camaro should. Even the tires – which I at first thought would be skinnier than items found on the V8 models – are the same width up front – 245 mm – as everything else in the line-up save the top-spec ZL1, though they are narrower in the rear than the V8s, whose width increases to 275 mm. You still get twin potato-cannon-sized tailpipes, deep front splitter, and molded side-skirts for that properly squat look. Yes, the super narrow head- and taillights are no longer as spitting an image of the classic Camaros as they once were, but they still look properly menacing, especially up front where they appear to be squinting out from behind a black balaclava. It’s pretty serious-looking, and I’d say it has the Mustang looking almost… pedestrian in comparison.

Well, yes and no.

In the exterior sense, the latest Camaro is a winner, looking a lot less slab-sided than previous and more furrowed-brow menacing and aggressive, too. Stepping inside, however, does raise a few red flags.

For starters, it’s hard not to get caught up in all the plastic in here. The soft-touch layer (with contrasting white stitching!) on the dash upper is nice, but most of the transmission tunnel, the doors, and centre stack is finished in scratchable plastic. Now, many will argue – as have I – that bare-bones interiors are part of the muscle/pony car charm, that doesn’t hold as much water in the modern age when even lower-end compacts are getting carbon-fibre and brushed-aluminum-lookalike finishes. There’s a little of that here, but the overall ambiance is a dark one not helped by the bunker-esque greenhouse. Actually, that “greenhouse” descriptor doesn’t really work here, since there’s very little glass to speak of. It’s like you’re staring out of a pillbox. Of course, when you display such a chopped profile, there are going to be sacrifices. A power sunroof will set you back $1,195 – may be worth considering.

Doesn’t really help that our 1LT model came equipped with jet-black fabric sport bucket seats, one of two colour options, the other being grey. They are a little flatter than you’d expect from something named “sport”, but while you may slide around a little more on the bolsters, the grippy fabric helps, and overall, the seats are comfortable. Upgrading to the 2LT package gets you leather seats in an array of colours. The seating position is fine, as Chevrolet seems to want to make sure that even though there isn’t that much glass to look through, it’s going to put you in a position that will help you make the most of what is on offer.

It does have its pieces of flair, though: the kickplates get big “Camaro” stamping (though I would have liked a two-colour jobby here instead of the black on black stamping we get) and the flat-bottomed wheel, for instance, gets a badge at its base that reads “FIFTY”. This being 2017, it marks 50 years since the first Camaro rolled off the line in a hurried attempt to beat the Ford Mustang at its own game. And beat Ford it did, dominating the Trans-Am series in 1968, just one year after the car was born. 1967 hadn’t been quite so successful, but the seeds were sown for a rivalry that would last decades.

The cabin is given a little added light by the standard 7.0-inch infotainment screen, though even its base colour is a little on the dark side. Luckily, it’s both Apple CarPlay and Android Auto compatible, so you can always switch Chevrolet’s native display for something else. As far as Chevy’s own system goes, the controls are responsive enough and the buttons well-sized, but if you are trying to operate your mobile device’s voice controls, you will likely get quite a delay. We did, every time.

As I sat there and considered all this, it was hard to shake the fact that this particular car was missing a certain piece – a big one – that made all that history so colourful: a naturally aspirated V8 engine. Even knowing that it was necessary, that if we wanted to keep getting cool cars like this to drive – and for as long as we’re actually driving and not being driven – manufacturers were going to have to find a way to work within the system, provided small solace.

So I blipped the start button – finished in black, of course, and somewhat tough to reach due to its low-mounted rectangular shape – prepared to hear a gentle hum coming from under the long power-bulged hood ahead of me.

Thing is, it was a little more than that since Chevrolet has decided to pump a little “enhanced engine sound” through the audio speakers. V8 models get the slightly less artificial mechanical sound amplification, but I was happy to at least have what I did in the turbo.

So, I selected Drive – a six-speed manual is standard, but I had the optional eight-speed automatic – and proceeded to peel out. Except I didn’t, really, because peeling out isn’t really something a four-cylinder Camaro does. The tires are grippy, so much so that even as we started to push things and try to upset the chassis enough to get the tail out, the Camaro continued to track fairly straight and true. So it doesn’t really have the power to do that kind of stuff, but it makes up for it in other ways, right?

This is where that “beginner’s pony car” sub-head comes in. On our favorite driving roads – roads we’ve driven in everything from STIs, to Shelby GT350s, to Boxster Spyders, the Camaro provided a bit of an intangibly rewarding experience.

I guess there’s just something about sitting so low in a pillbox of a car and pushing it forward, knowing that it’s not going to bite you in the bum should you drop the hammer a little too hard. We also often hear manufacturers talk about how smaller engines save weight, adding to the handling abilities of the car. While I don’t know how many buyers are opting for smaller engines based on that, this Camaro is an able handler to the point that it would be worth considering for that aspect alone. It feels more able than the EcoBoost-powered Mustang, and that’s no small feat, though the Mustang does make more power.

Plus, not being able to easily drift the thing is not to say that it’s not fast; quite the opposite, in fact, as that traction allows you to get the power down smoothly and efficiently, with a nice little turbo whistle as you send the needle sweeping past the 3,000 rpm mark to go along with it. There’s a little turbo lag, too, but such is life with most engines of the type and I won’t hold it against this one.

Of course, that engine noise you’re greeted with tends to fade a little as you push it further, probably because even though the engine’s spinning faster and so forth, the noise doesn’t quite follow suit and its turbocharged digs start to become a little more evident. I have to say, good as it was, I never quite got over the strange feeling that even as you’re really caning it, the report from ahead and behind you is just a little pedestrian.

Less pedestrian is the transmission action, which is responsive through all eight gears thanks to wheel-mounted paddles that I made plenty of use of throughout my time in the car. It’s the same transmission found in the Corvette and Corvette Z06, and it does a great job of keeping you nicely in the power-band. Especially if you select Track mode, which sharpens transmission action and throttle inputs. Track joins Tour (read: “normal”) and Snow/Ice; we kept it in Tour most of the time. It’s good, however, that Track’s not so intense that you actually have to be on a track to make the most of it – a properly winding road fits the bill perfectly. 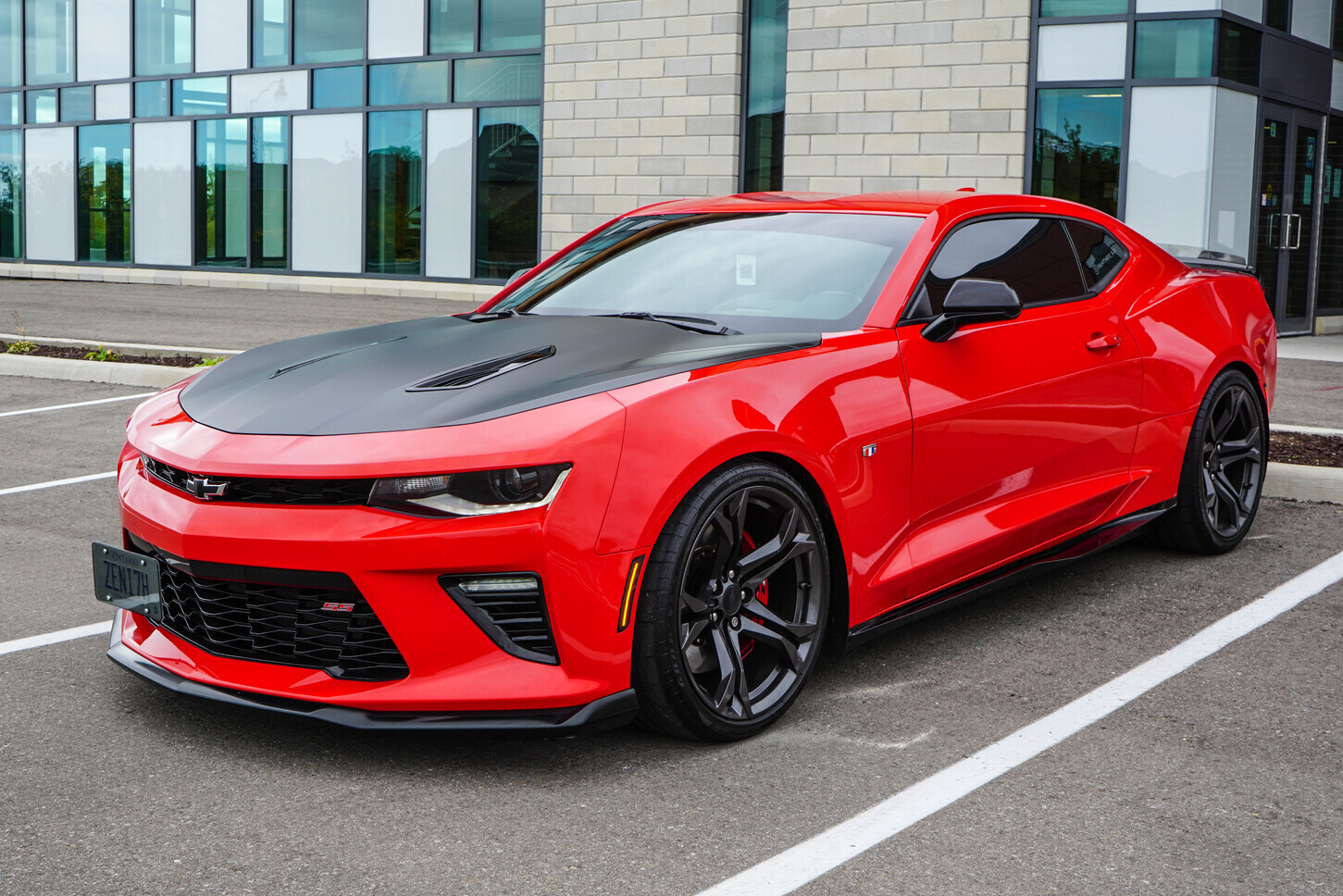 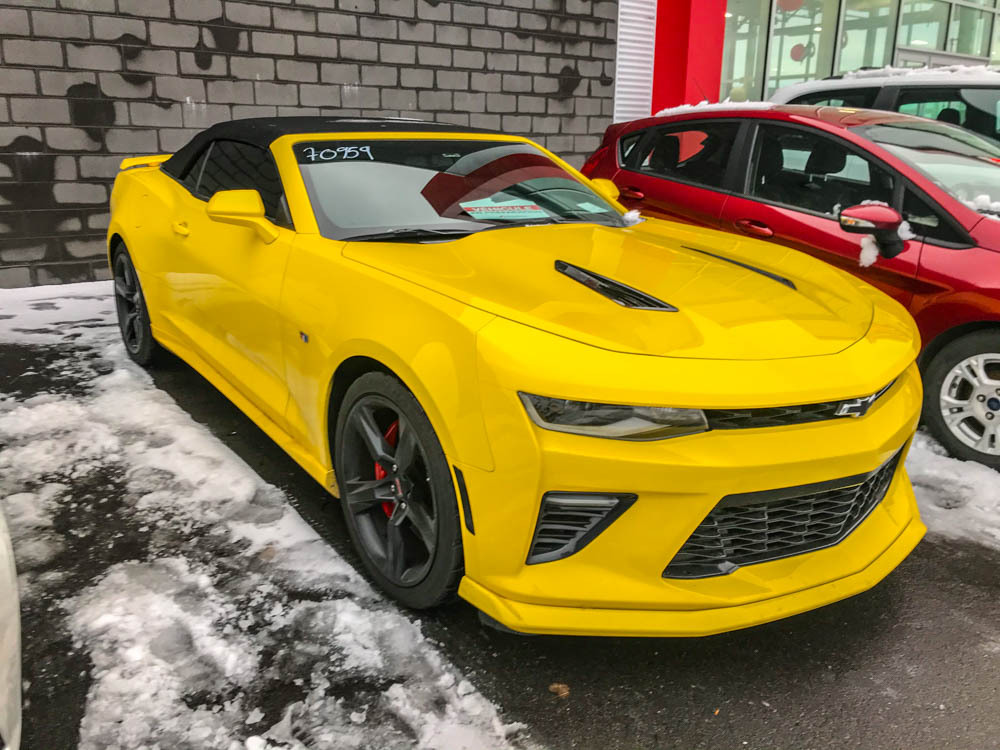 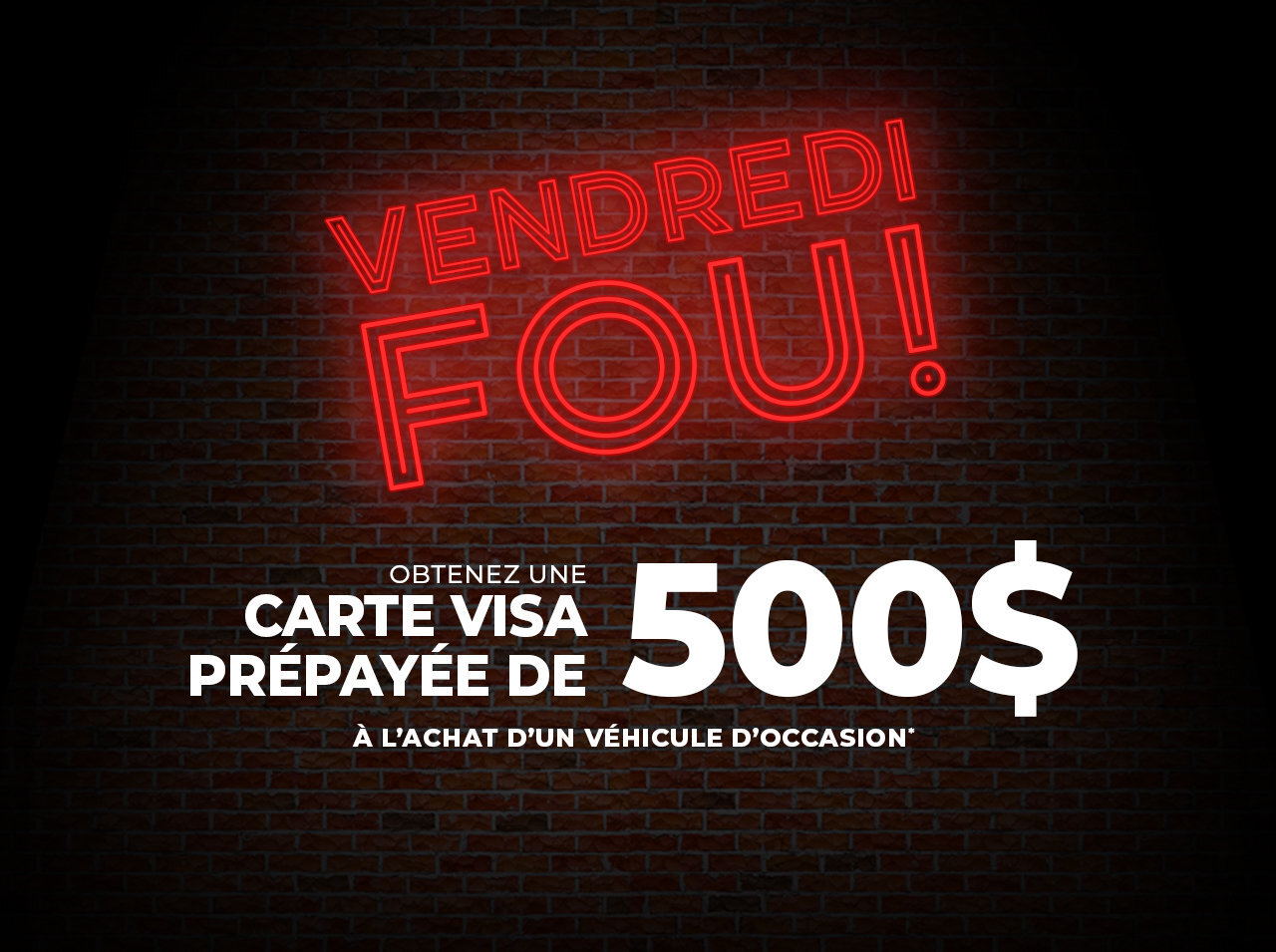 Winding road complete, it was time for a trip back to town and a chance to reflect on whether or not this particular Camaro was worthy of one of North America’s most famous automotive nameplates. To be honest, on looks alone, it’s right on. You’d have to be quite the eagle-eyed Camaro-phile to know that this wasn’t a full-chat SS V8 version, and that’s a very good.

Of course, there are certain buyers that may always be pulling up beside V8 versions and having that “Why, oh why didn’t I get the V8?” thought in the back of their mind, but I wonder if there’ll be a whole new group of more environmentally and value-conscious buyers that may not even consider the V8, but be very happy that this is an option.

Remember: the original pony cars were inexpensive ways of getting into a sporty vehicle; they were smaller than their muscle car compatriots, often in both the engine and body. And if we take that tack, then a four-cylinder, turbocharged Camaro makes perfect sense.

About Dan Heyman
Dan Heyman is a car guy through-and-through, ever since his first word was “Toyota”. Dan has worked as a full-time automotive journalist since 2010.
Follow me
You may also like
7.6