BARCELONA, Spain – Amidst an over-the-top presentation featuring Big Bang Theory star Kunal Nayyar as MC, and a full-scale Audi A8 being effortlessly spun around like a toy model by a giant robotic arm, the Ingolstadt company unveiled its new flagship sedan, the 2018 Audi A8.

The A8 is the first car on the market developed to be capable of Level 3 Autonomous Driving.

Whenever one of the premium brands releases a new generation of top-tier machinery these days, it’s bound to be a significant affair, not just because of the ever more lavish heights of luxury presented, but for new breakthroughs in technology.

In terms of luxury, as one would expect, the new A8 (and A8L, the long wheelbase version) will feature a significant breadth of available materials for interior finishes including supple leathers and carefully crafted wood trims.

Similar to BMW’s extravagant rear-seat space, Audi has made the passenger-side back seat one suitable for royalty and captains of industry. With heating, cooling, and massaging elements, it takes things a step further with a footrest that also features a massaging function. These rear seat commands are managed by a handheld, removable remote control featuring an OLED screen. At 37 mm longer and 13 mm higher than the outgoing model, occupants are given more head- and legroom in the new A8.

But it’s the technology that seems to really set the A8 apart from its premium luxury sedan competitors. The A8 is the first car on the market developed to be capable of Level 3 Autonomous Driving. This means Audi has built in enough redundancies and fail-safes for drivers to be permitted to remove their hands from the steering wheel, and their attention from the road. This comes, of course, with the giant caveat that it will only be possible in markets where this is legal, which currently includes Germany… and that’s about it.

Called Audi AI Traffic Jam Pilot, the system is designed to work on divided highways at speeds up to 60 km/h. The car will manage its own starting, stopping and steering manoeuvres as required. This means that commuters regularly mired in typical rush-hour traffic misery can look forward to the commute time being productive or relaxing, rather than stressful, as part of a philosophy Audi calls The 25th Hour (suggesting this technology essentially gives drivers an extra hour in their day when the commute would’ve otherwise been “lost” time).

The system works thanks to a complex set of radar sensors, a front camera, ultrasonic sensor and, as an automotive first, a laser scanner fitted in the lower front grille. The information from all of these vehicular sentries is managed by a central controller called zFAS that continuously computes an image of its surroundings.

While this technology is available and engineered for the A8, the first machines that roll off the assembly line will not be equipped with Traffic Jam Pilot (nor will they be able to be retrofitted with it) until the necessary legislative and statutory structures are in place to catch up to this technology.

Audi will, however, offer its new Parking Pilot system, enabling the car to autonomously park itself, a feature that is particularly handy for tight squeezes. The driver can be outside the car and engage the system via his or her mobile phone and the myAudi app. The whole process can be monitored on the smartphone thanks to a live feed from the car’s exterior cameras.

The A8’s next generation MMI infotainment system features a black panel design that almost seamlessly disappears into the high-gloss surrounding trim when not switched on. The main screen – a 10.1-inch touchscreen affair – features sensational graphics (especially for major European cities that are rendered in highly detailed 3D modelling), but is also operated in conjunction with a second, lower touchscreen. This second screen features haptic “buttons” that are adaptive in their sensitivity and provide an audible response as well as a tactile one. This second screen eliminates the rotary dial and touchpad we’ve seen in previous Audis, and becomes one giant finger script pad when inputting information on the fly (or one could simply utilize Audi’s sophisticated natural-form voice control).

We’ve seen these large screen-dominant control panels before (Cadillac’s lamentable CUE as well as the large screen system in Teslas) that can sometimes prove to be unnecessarily complex or difficult to manipulate at speed. Having spent a bit of time playing with the system, it shows that Audi has done its homework in at least putting certain “buttons” in consistent places (like a back/return button), and by not making the touchscreen overly sensitive. It is plausible that this system may prove to be more user-friendly in the real world than competitive units. Only time will tell, however, and one thing this system hasn’t yet solved is the unsightliness of greasy fingerprints all over the glass.

The A8’s MMI is constantly utilizing its connectivity at LTE speed to provide predictive and real-time information (such as Yelp reviews for nearby restaurants, for instance), in the interest of making life behind the wheel a little easier at all times.

The A8 represents the inception of a new exterior design language for Audi. Brand design chief Marc Lichte explained the A8’s design starts with the 100 percent vertical “Singleframe” grille that stands in contrast to the positive forward-leaning rear plane. Coupled with a sweeping “coupe-like” profile, Herr Lichte would like us to see signs of the classic motor yachts that provided inspiration here.

More importantly, the new design breaks from design tradition by adding a new, lower character line on the A8’s flanks. This serves to lower the visual gravity of the design, but also allows designers to flex out muscular bulges around the tops of the wheel arches too.

Overall, it’s an impressive and powerful look suitable for a flagship model. It’s also one that is still readily identifiable as an Audi, perhaps with the exception of the rear light treatment that now has the twin OLED taillights connected with a light-bar strip across the middle of the trunk that reminds one of a Lincoln Continental.

Audi A8 available on autoTRADER.ca 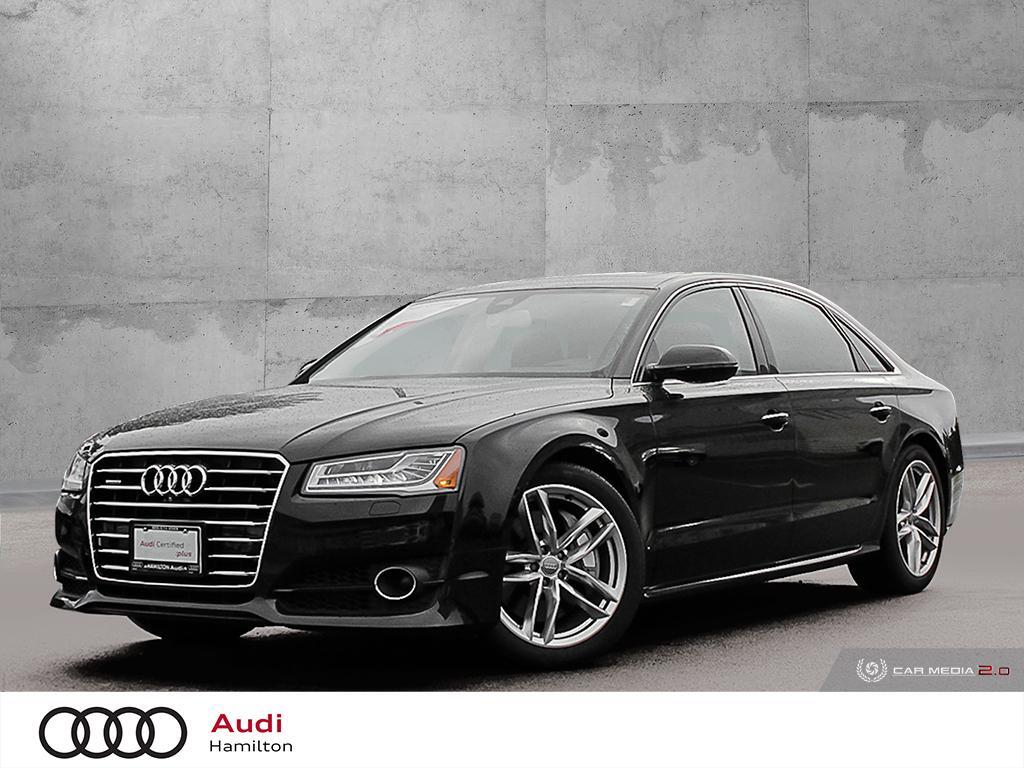 When the new A8 and A8L go on sale in Germany this autumn, they will be offered at first with re-worked versions of existing V6s currently employed in other models – one a TFSI gasoline version at 340 hp, and the other a TDI diesel with 286 hp. A 460 hp V8 (gasoline) and 435 hp V8 (diesel) will also be offered, as well as a 6.0-litre W12, later on. While it’s safe to bet the diesels won’t be coming to North America, an A8 L e-tron plug-in hybrid is expected to cross the Atlantic at some point.

The new A8 should be in North American dealerships in early 2018 and pricing will be announced closer to their release date.