Just in time to take advantage of Canada’s tiny crossover craze, a brand-new second-generation Audi Q3 has been spied in camouflage and is anticipated for a 2018 model year debut.

The 2017 Audi Q3 looks as fashionable on today’s roads as it did when it launched.

Wait, you may be thinking to yourself. Didn’t the Q3 just come out a couple of years ago?

You’d be partly right. Though it’s been available in other markets since 2011, it didn’t land in Canada until 2014. As the stakes in the cute-ute segment grow ever higher, we can expect Audi to want to make a major splash when the new version arrives.

In the meantime, though, there are 2017 models to move off the lots. And though there’s plenty about the current Q3 that’s unmistakably classic Audi, there are a few things that might make the 2018 redesign worth waiting for.

Audi is consistent in many ways, and one of them is in how well its designs endure over time. Despite sporting styling that’s now six years old, the 2017 Audi Q3 looks as fashionable on today’s roads as it did when it launched.

This tester is the top-of-the-line Technik trim. At an as-tested price of $49,985, it doesn’t come cheap, but this unit is equipped with several options that raise the price significantly, including the Monsoon Grey paint, 20-inch wheels, and the black optics package that adds a high-gloss black grille and black roof rails. If you can live with 18-inch wheels (or 19-inch if you keep the sport package this car also has included) and drop the other features, the price comes down by a little under $2,200.

With the exception of Audi’s Quattro all-wheel-drive system, which is an option at every trim level in the Q3, the powertrain is consistent across the board: the 2.0-litre TFSI four-cylinder makes 200 horsepower and 207 lb-ft from 1,700 to 5,000 rpm.

In normal drive mode, drive feel is fine for commuters but a touch uninspiring. Fortunately, this is easily fixed with the sport package, which tacks on a three-spoke steering wheel with paddle shifters, an S Line sport suspension, a black headliner, front comfort sport seats, and Audi Drive Select. The latter adds the option to tighten up the steering by selecting dynamic mode over the default comfort mode. Do that and drop the transmission into sport, and suddenly popping in and out of traffic gets a whole lot more fun. Since I care about driving, if I had one this is where I’d expect to keep it set to most of the time.

I finished my week with the Q3 showing a fuel consumption rating of 8.1 L/100 km, which is better than I was expecting considering that I wasn’t trying very hard and I spent far more time on city streets than I did on the highway (more on that in a minute). The official NRCan rating is 10.3 L/100 km combined; don’t forget to budget for premium fuel.

On the road, the Q3 handles exactly as well as a premium subcompact crossover should: well-balanced and eminently maneuverable.

This becomes even more evident on tight downtown streets, where I happened to need to spend more time than usual in the week I had this tester. I found myself repeatedly grateful not only for the compact dimensions and nimble dynamics but also for how easy it was to cram into tight spaces. The Technik trim’s advanced parking system got me into and out of tiny parallel parking spots with inches to spare. My only wish was that it loaded a little faster as it takes a few seconds to get going when the vehicle starts up. That’s not a ton of time in the grand scheme of things, but city people want their cars to operate on city timelines. This is one place where the upcoming model can be expected to show some major improvement.

While the outside of the Q3 doesn’t look at all dated, on the inside there are places where it starts to look a little long in the tooth, particularly in the centre stack where a CD player, SD card inputs, and a sea of buttons all dominate.

Some aspects help to mitigate this somewhat, such as the standard panoramic sunroof and the sport package’s matte brushed aluminum inlays. Though the otherwise comfortable sport seats couldn’t be positioned close enough to the dashboard to put me in exactly the correct driving position for my short arms, the sport seats are supportive and I was largely comfortable. My daughter reported the same from the back, though the limited leg room might make long drives unpleasant for taller second-row passengers.

One thing I’ve missed since driving this car is the elevated seat belt connectors. It was nice not to have to dig around aimlessly beside my hip to buckle up. It’s the little things.

The Q3’s cargo space is average for the segment at 473 L, but I was happy with it. I got $400 worth of groceries into the cargo area without having to overflow into the back seat, which is all most buyers in this segment will ask for.

This is where the Q3 shows its age the most. The infotainment system is dated, it’s slow to load not only at start-up but with every channel change, and its overall usability is awkward. It drove me absolutely batty that it took a rightward (clockwise) turn of the dial to go up a station but on the buttons it was the left one that performed the same action. And there’s no Apple CarPlay or Android Auto compatibility to help get around it.

If infotainment systems matter to you, you’ll want to look to the next generation. Based on how Audi’s newer systems perform, the 2018 Q3 should bring significant improvements in this area.

There are some safety features available for the Q3 but not as many as in some newer competitors. Several of the most commonly sought ones require buying this top-tier Technik trim, including a rear-view camera, the advanced parking system, and Audi side-assist blind-spot monitoring.

The 2017 Audi Q3 is good in many ways, but there are solid reasons to believe that the next-generation version coming for the 2018 model year will be a more competitive value proposition. Unless you score a screaming deal, hold out for a few months if you can. 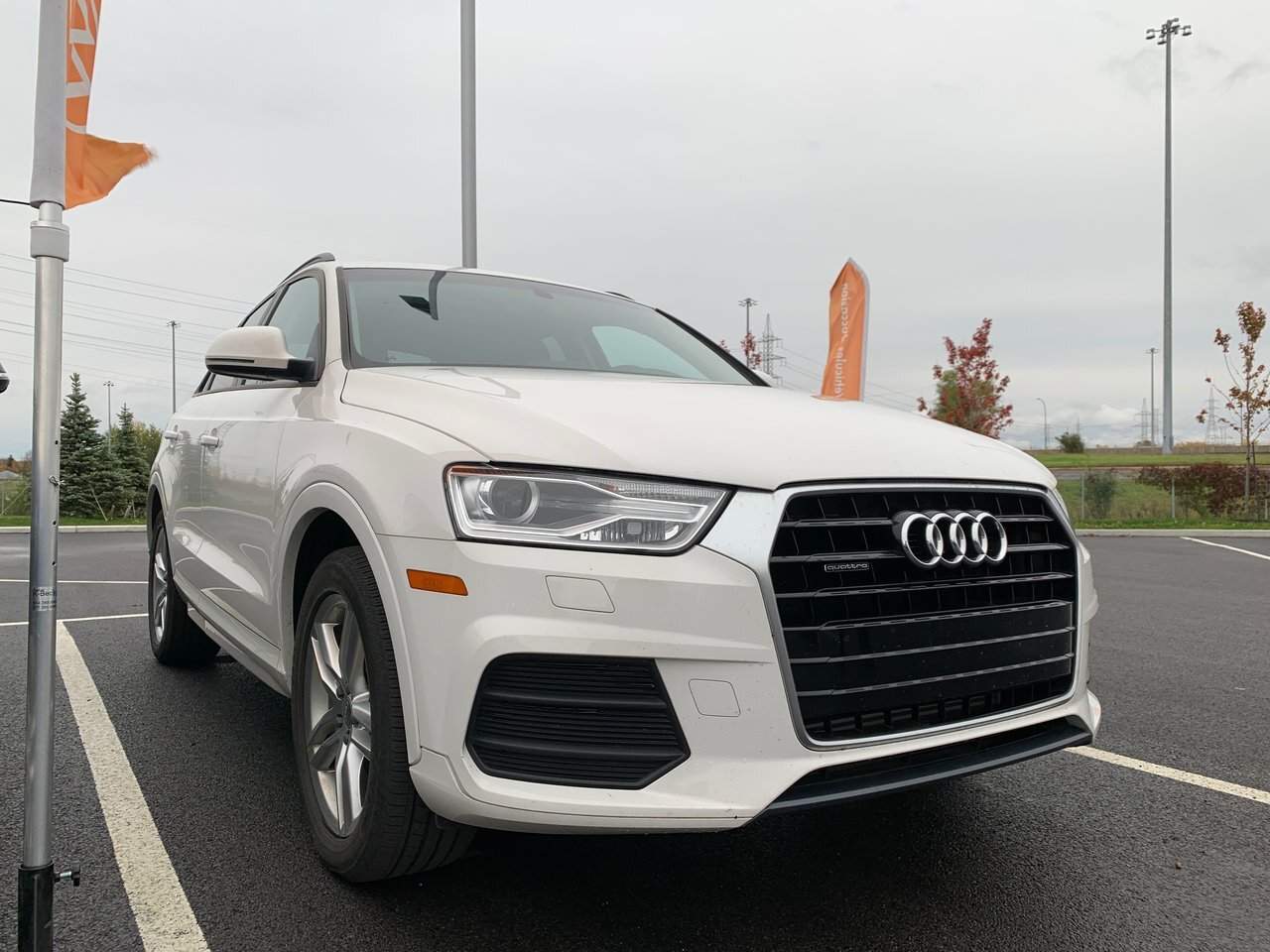 About Stephanie Wallcraft
Stephanie Wallcraft is the child of an auto worker and honed her passion for cars in the grandstands of the Molson Indy Toronto. Today she continues the family tradition by writing about cars and motorsport for publications across Canada.
Follow me
You may also like
7.6