“You’re going to have taco trucks on every corner!” Well, in Western Canada, we already do. Relax, this ain’t about to get political. That’s capital-T Taco: the ubiquitous Toyota Tacoma. Clustering together everywhere people meet up to get scabby shins and mud spatters, the mid-sized Tacoma is a West Coast way of life. Now, there’s a new king.

This is the Tacoma for the downhill mountain biker crowd, the kind of truck that comes with a standard GoPro mount so you can film all your best bad ideas.

Rolling in on a mildly lifted suspension wearing wide 16-inch alloys, the TRD Pro is a whole new level of aggression for the 2017 Toyota Tacoma. Available as a package on both manual and automatic versions of the short-box doublecab, the Pro adds skid plating, a matte-black hood scoop, Rigid Industries light pods, blacked-out decals, and a massive all-caps “TOYOTA” grille.

Decked out in Cement Grey, it looks the business, the dream of any BC backroads-basher. This is the Tacoma for the downhill mountain biker crowd, the kind of truck that comes with a standard GoPro mount so you can film all your best bad ideas. It looks like it should come with a flat-bill baseball cap and a four-pack of Monster in the centre console (side-note, said console perfectly fits a four-pack). Sick, brah – just one problem.

This thing is almost as expensive as a BMW 3 Series. Actually, that’s a little out of context, try this: go to Ford’s configurator and start throwing options at a 2017 Ford F-150 crewcab. Even with the most expensive engine and trim options, the full-size Ford is still cheaper than the TRD Pro’s eye-watering $55K pricetag. That’s a lot to pay for Taco supreme.

Thus, it was with a somewhat jaded eye that I walked up to Toyota’s pricey pickup. First annoyance – while keyless entry and push-button start is part of the Pro package, it only works on the driver’s side. As I had my hands full with a child seat, fishing out the key fob already had me peeved at the Pro.

Climbing into the cabin provided a few further gripes. Like its predecessor, the new Taco has a somewhat cramped cabin, and finding a comfortable driving position takes a bit of fiddling. The seats are mounted pretty flat to the floor, so there’s not much gap between the steering wheel seat bottom, depending on your normal driving position.

Still, the TRDification of this particular model’s interior provides a few bright points. The seats themselves look pretty good, and there’s a hilariously chunky TRD shifter topping the gated shifter.

Toyota’s Entune system continues to be exactly what you’d expect from the company: not too flashy, but easy to use. Pairing via Bluetooth was quick and simple, and I never had an issue with streaming audio, fielding calls, or using the navigation.

The kids loved the truck. The crewcab is just big enough to handle a couple of car seats, and you could make the argument that a shortbox Tacoma would work just fine as a secondary family car. It’s short enough to be maneuverable, and the standard backup camera made city parking easy. It’s also not too tall for underground parking.

Having disposed of everyday duties, I pointed the Tacoma North, towards Squamish. We’ve already seen plenty of examples of the TRD Pro surfing over dunes in PR photos, but a couple of BC forestry service roads would provide a somewhat more Canadian test.

On the Sea-to-Sky highway, the Tacoma TRD Pro handled with much the same aplomb as any other Tacoma. Upgrades to the suspension include revised spring rates front and rear, and shock absorbers by offroad specialists Fox. While intended for rough road applications, these haven’t hurt how the Tacoma handles a bit of twisty tarmac.

No, the issue is not the suspension, but the engine and transmission combo. Toyota replaced their somewhat thirsty 4.0L V6 with a 3.5L unit when the current generation Tacoma was launched, and while fuel economy is up on paper, the relative lack of torque can be frustrating.

The V6 produces 278 hp up at the top of the rev range, and a healthy-sounding 265 lb-ft at 4,600 rpm. To anyone still clunking around in an automatic Toyota pickup from the early days, the TRD Pro will feel like a rocketship.

But anyone swapping into a truck like this out of even a four-cylinder Honda Accord will find the TRD Pro a bit sluggish. The Tacoma offers about the same level of acceleration as a mid-sized four-cylinder sedan, but it requires some pretty serious poking at the accelerator to get it to pass. The power’s there if you want to dig into the revs, but this being a pickup truck, I’d be perfectly happy to sacrifice some top end power for better torque.

Further, the six-speed automatic seems to be a bit on the fence about what its job is. On one hand, it’s not too quick to downshift, ready to save fuel. On the other hand, it’ll also sometimes hang out in fifth at highway speeds, meaning you’re not getting the best fuel economy. Good luck hitting the official targets: while the Tacoma is improved overall from the 4.0L V6, it’s still not shy about drinking fuel. Mixed-mileage ended up around 13.5 L/100 km.

Naturally, hauling around a crewcab pickup means there’s weight and air resistance to overcome, but it does bring up the age-old question: why no diesel option? Cost is usually the reply here, but seeing as we’re looking at a $55K truck, could the market not bear the premium required to bring some stump-pulling power to bear? Certainly Chevrolet seems to think so with the upcoming Canyon ZR2...

At any rate, the TRD Pro is at least adequately powered and the note from the stainless steel exhaust sounds good. Having reached the trailhead, I engaged four high to deal with the sheet-ice of the road, and ventured out into the woods.

Along with a revised and raised suspension, off-road versions of the Tacoma get an electric locking rear differential and Crawl Control for low speed ascents and descents. The slippery conditions prevented maximum attack in a few places (the truck was at least wearing proper Blizzak winter tires), but it happily stomped through frozen puddles and slippery mud without a care in the world.

A few critics have noted that the TRD Pro’s standard tire is a street friendly Goodyear Wrangler, which isn’t as aggressive as what you can get on the Ford Raptor. If you’re a true off-road enthusiast, budget a bit extra for a set of BFG All-Terrain K02s or similar.

However, I’m not so sure the TRD Pro is designed to appeal strictly to those who’re going to spend every weekend in the back country. In the plus column, I found it friendly and livable to drive, great-looking, and easy to live with. The durable interior held up well to a week’s worth of kid-schlepping, and the chassis was more than up to a bit of poking around in the woods. 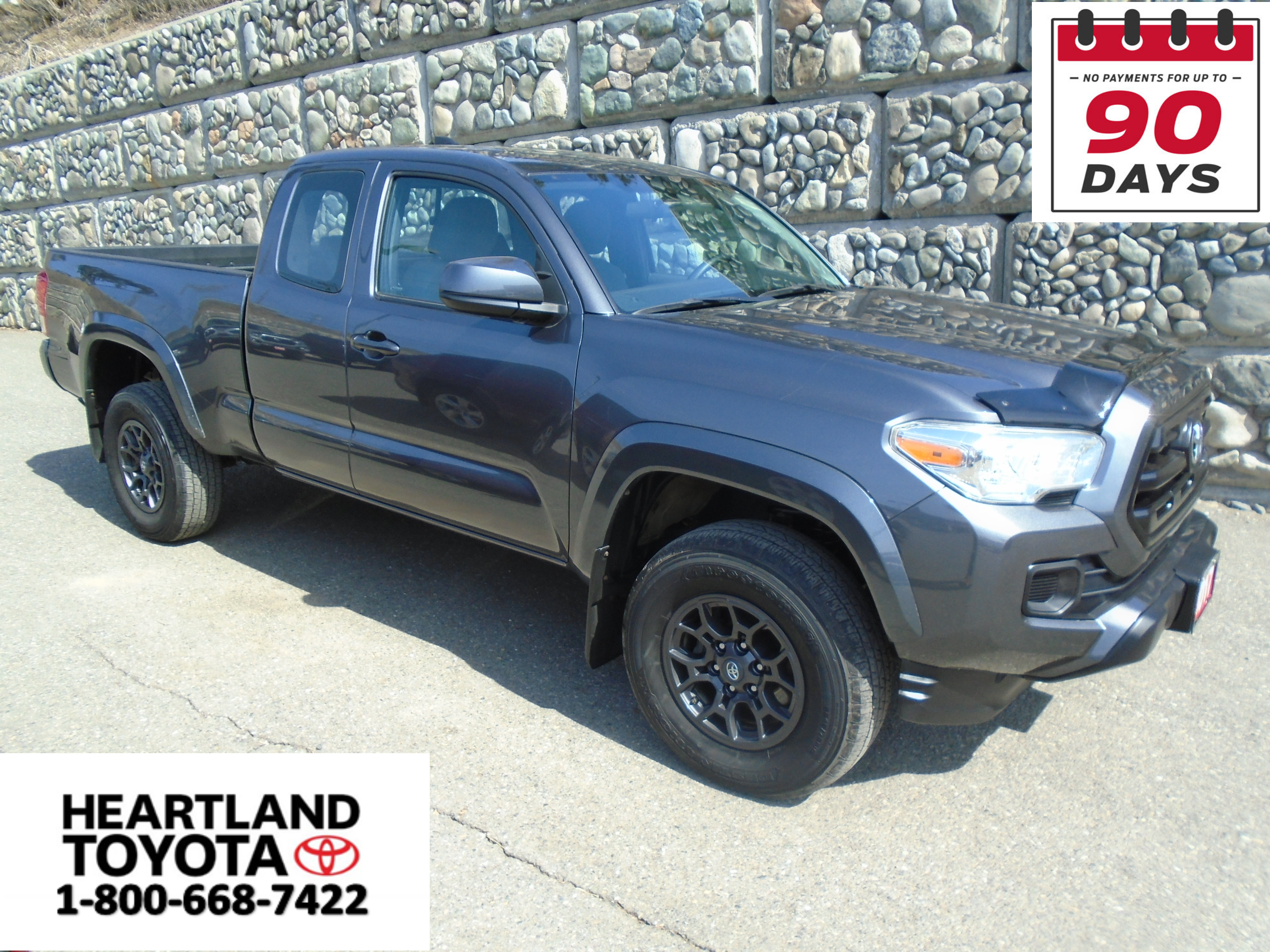 The guys who are really going to want a truck with maximum outdoor appeal are probably going to want to start with something a little more basic, then go to the aftermarket to build something that can handle the deep dirt. It’d likely be a cheaper route, and one that allows for more customization.

But on the West Coast, maybe the TRD Pro is more BMW alternative than baby Raptor. It has street cred in spades – everyone loved it, regardless of snobbery – it drives well enough and it looks cool. It’ll also come with one of the highest resale values of any vehicle on the market. Tacomas just don’t depreciate out West.

There’s a reason there’s a Taco truck on every corner around here, and it’s not just about economy or capability or value. People like the Tacoma. They like the way they look, the heritage of the breed, the reliability, and the resale.

The best thing about the TRD Pro isn’t that it’s particularly improved over another Off-Road Tacoma, but that it’s cool. I’m still not convinced it’s $55K worth of cool, but when you look at what used Tacomas go for, maybe it’s not that expensive in the long run. Maybe ordering Taco supreme is the right way to go after all.

About Brendan McAleer
Brendan McAleer is a Vancouver-based automotive writer, a member of AJAC and a ginger.
Follow me
You may also like
7.2