Sumptuous comfort, practical utility, technological wizardry, ease of entry/egress, a commanding driving position, social status and, for the manufacturers, solid profits: mid-size luxury SUVs offer a generous helping of all these things, and it's a formula that's proven nearly irresistible for today's car buyers. Little wonder then that the segment has become crowded with worthy rivals.

Lincoln's MKX has been completely redesigned for 2016 and, as the numbers show, it has emerged a winner.

After sitting near the bottom of the mid-size luxury SUV sales heap for the past few years, Lincoln's MKX has been completely redesigned for 2016 and, as the numbers show, it has emerged a winner: as of the end of April, Canadian year-to-date sales for the MKX are up 95.5 percent compared to the same period last year (1,087 units versus 556 in 2015), and the April 2016 numbers are up 156 percent over last year (335 units versus 131 in April 2015). It's an increase unmatched by any of MKX's mid-size competitors, even the new-to-market Mercedes-Benz GLE, which managed a YTD increase of 45.9 percent compared the outgoing M-Class (mind you, Lincoln wouldn't mind having Mercedes-Benz's overall numbers, with 2,649 of the German manufacturer's mid-size SUV’s sold so far in 2016). U.S. sales numbers reveal a similar trend, with MKX sales nearly doubling over the first four months of 2016, from 5,325 units to 9,829 units. 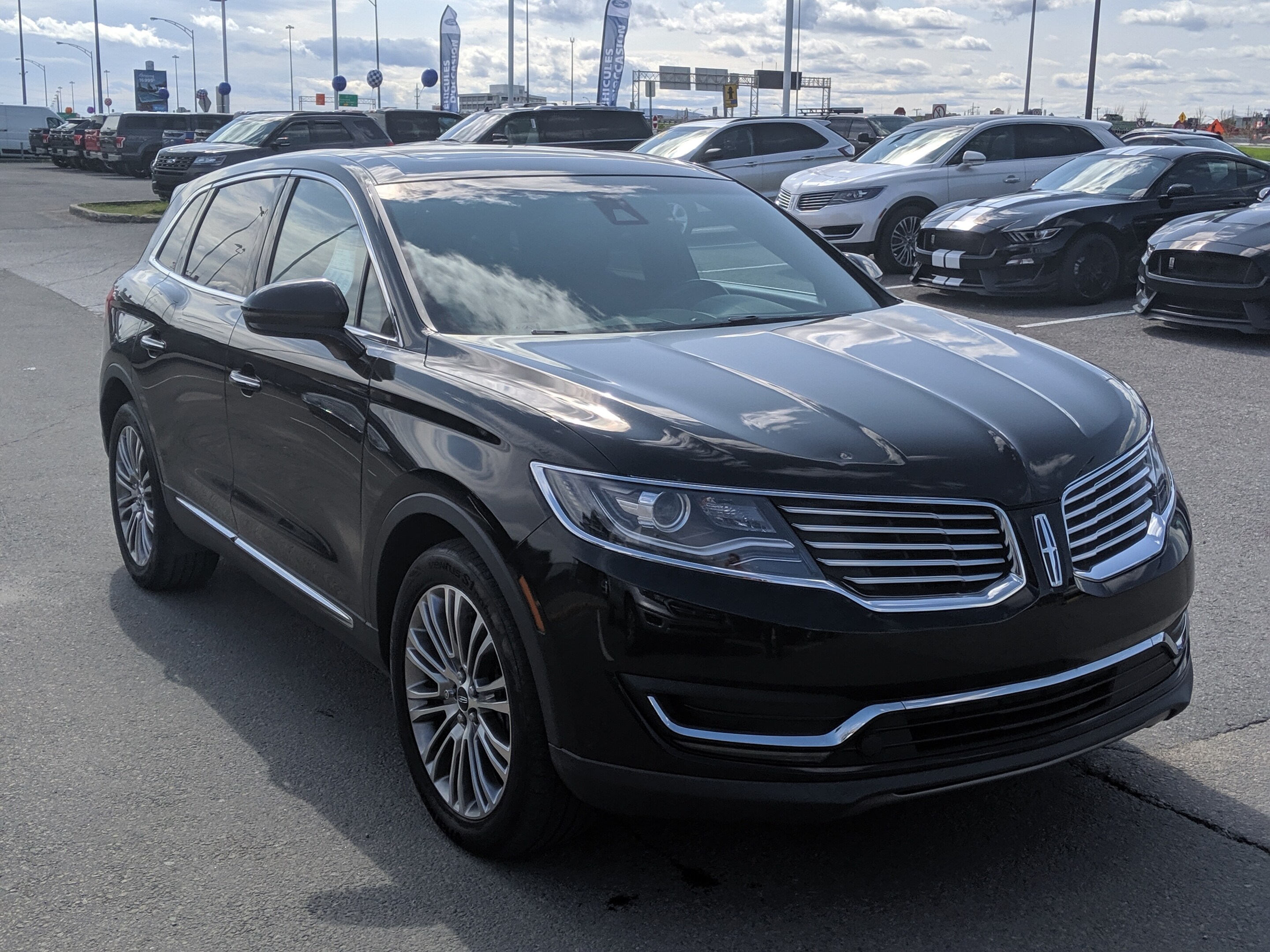 The new second-generation 2016 MKX follows all of Lincoln's current design cues, and as such it doesn't stray far from the overall look of its predecessor. Its lines are crisper and more accomplished, however, and to my eye it's an undeniably better-looking machine than the first-generation MKX. Overall it bears a strong resemblance to its compact MKC sibling, and is certainly a lot more conservative and understated than the wild-looking Lexus RX, which has been the luxury mid-size SUV segment's sales leader for the past few years.

Underpinning the new MKX is Ford's CD4 platform (as used in the current Ford Fusion, Ford Edge and Lincoln MKZ) with integral link rear suspension and adaptive steering, replacing the previous CD3 platform. Power for the base MKX is from a 3.7L V6 generating 303 hp and 278 lb-ft of torque, hooked up to a six-speed automatic transmission and, in Canada, driving all four wheels via Lincoln's on-demand AWD system (U.S. models are available in FWD or AWD). New for 2016 (and as fitted to my test car) is an optional turbocharged 2.7L V6 EcoBoost engine generating a stout 335 hp and an impressive 380 lb-ft of torque.

Inside, the MKX has been knocked in the past for too closely resembling the mass-market Ford Edge on which it's based, although in some ways this might merely be a testament to how good the Edge can be in upper level trims. For 2016 Lincoln has worked to further differentiate the two vehicles. Some of the efforts are clearly visible – where the Edge has a plastic-lined cargo compartment the MKX gets carpet, for instance, and as you approach the doors the MKX greets you with a Lincoln badge puddle light – while other efforts are less visible but equally important, such as the increased use of sound deadening and active noise-cancelling features.

Interior materials include a stitched leather dash, padded leather arm rests and console bin lid, and cloth-wrapped A and B pillars, all highlighted in my test vehicle with aluminum and polished metal trim (and no piano black in sight!). There remain some low-rent plastics at the door lowers and bottom portion of the console, but Lincoln isn't alone here so I'm not sure it's fair to knock the MKX for these material choices. There's decent interior storage with a big console bin, a closable gadget cubby, and clever (if somewhat difficult to access) hidden shelves below the console.

Where the MKX really stands apart from the Ford Edge is in the availability of premium options including a 19-speaker Revel Ultima sound system and 22-way massaging seats. I found the former to be quite phenomenal, with tremendous presence, excellent dynamic range, and outstanding clarity, although I've heard committed audiophiles complain that it can sound artificially punchy. The system uses parent company Harman's Clari-Fi sound processing to get the most out of digital music files, and together with the lower-spec 13-speaker Revel system, it was designed specifically for the MKX, with Revel sound engineers getting in on the vehicle's interior design and speaker placement decisions early in the development cycle. Helping the audio system sound great is the MKX's profoundly quiet listening environment – all that passive and active sound deadening mentioned earlier really does work.

I wasn't quite as thoroughly sold on the leather-upholstered 22-way heated and cooled massaging contour seats. They're certainly highly adjustable, and I was able to get good and properly comfortable, but only after completely deflating all the adjustable bolsters. At 5'11" and 165 lb I'm not a particularly big guy, so I can't really imagine many people needing or wanting the bolsters inflated, and I'm surprised Lincoln didn't scavenge some of the spare room between the seat and the door to make a slightly wider chair. As for the massage functions, they're really quite something, although without exception my passengers and I all found the "High" setting to be just too much (and female passengers tended to find the lower seat portion of the massage to be surprisingly, umm… intimate, although fortunately you can turn the various massage zones on or off as desired). The three rear seats, while not massaging, are all roomy and comfortable, with recline functionality and heated seating in the two outboard positions.

Control of the audio system, massaging seats, navigation system and other infotainment features is via an eight-inch touchscreen running either the older Microsoft OS-based Sync 2 interface (the familiar MyLincoln Touch system) in early-build 2016 models, or the new Blackberry OS-based Sync 3 interface in later-build 2016 models. My test car was equipped with the old Sync 2 system, and so it was entirely familiar both in terms of the good (lots of functionality, decent voice recognition) and the bad (too-small touchpoints, laggy response times and a complicated menu structure). Which system you prefer may depend on whether you've previously owned a Sync 2-equipped vehicle (in which case you might perhaps appreciate the more familiar older interface) or whether you're new to the Ford/Lincoln fold (in which case the Sync 3 system promises quicker response times, an improved and more intuitive smartphone-like interface, and better forward compatibility with upcoming new devices). The two systems aren't upgradable or interchangeable, so if you want Sync 3, make sure the vehicle you're purchasing is indeed Sync 3 equipped. Happily, regardless of what infotainment software is installed, the 2016 MKX ditches the previous generation's finicky touch-sensitive volume and tuning sliders, and instead follows the trend back to proper volume and tuning knobs for quick and easy hardware control of these basic functions. Praise be!

On the road, the MKX delivers exactly what buyers in this segment are looking for, with a relaxed and comfortable ride, assured handling, good brakes, a full array of available driver assistance technologies (including new-for-2016 emergency auto-braking) and solid crash safety ratings in case something truly unavoidable happens. An adaptive suspension system offers Comfort, Normal and Sport modes, which you can theoretically select from if you can find them in the menu system. Happily, you can also set the vehicle up so that the Drive and Sport transmission modes call up the appropriate suspension and steering settings, and done like this it's easy to choose your preferred setup with the press of a single gear selection button. Personally I found the Comfort mode too soft and floaty, and I preferred the MKX in Sport transmission and suspension modes, which gave it a reasonably poised and eager demeanour, making it fun to hustle through traffic and around corners, without jostling anybody around.

Speaking of hustle, the 2.7L EcoBoost V6 really boogies when you put your boot to it (0–100 km/h is dispatched in just over six seconds), but it also lays waste to your fuel economy at the same time. It seems you can have your Eco or you can have your Boost, but not together. Official fuel consumption ratings are 14.4 / 10.3 L/100 km (city/highway) and I managed about 14.5 L/100 km in the city when driving with a moderate foot on the throttle, but when I unleashed the horses my city fuel consumption rocketed up to a rather alarming 20 L/100 km. (As an aside, I couldn't help but wonder what this engine would feel like in the Ford Mustang in place of the 2.3L inline-four EcoBoost option offered for that application.) On the highway it's reasonably easy to achieve the rated numbers, and the MKX glides along in blissful, cocooning silence.

Where the MKX is a little less user-friendly is in parking lots, where its bulky A pillars and thoroughly obstructive C and D pillars create some monumental blind spots. Fortunately an excellent around-view camera is available in place of the standard-equipment single-view camera, and it's one option I'd highly recommend getting (mind you, an acquaintance who purchased an MKX didn't like that he couldn't turn off the split screen capability, and found the amount of information displayed to be distracting). There's also an available active parking assist system, which will entirely take over the steering duties for you when parallel or perpendicular parking, although it's better at the former (it usually makes a three-point effort when perpendicular parking), and you still have to deal with the vehicle's somewhat abrupt low-speed throttle and braking responses. Once parked, the hands-free power hatch makes it easy to load whatever you're carrying, and there's no annoying beeping as the hatch opens and closes, just a brief subdued chime. More praise be!

In a nutshell then, the 2016 Lincoln MKX offers conservative good looks, a sumptuous interior, an admirably quiet and comfortable ride, and plenty of luxury bells and whistles. It's a nice rig and a significant improvement over the previous generation version, and as such it's finally a real alternative to Japanese contenders like the Acura MDX and the wildly styled Lexus RX, as well as pricier German rivals like the Mercedes GLE and BMW X5.

That said, while many buyers will indeed cross-shop the Lincoln MKX against its luxury rivals, some of its fiercest competition may come from within the family fold: While the MKX starts at $46,250 and the Ford Edge starts at $31,349 (both before destination fees), there's a significant price crossover between the two, with a top-spec Edge offering luxury and performance that's nearly equivalent to an upper-trim MKX, at a lower-trim MKX price. My EcoBoost-powered MKX tester, which includes the Reserve trim 102A Equipment Package and the Climate Package, priced out at $56,300 before options and $64,990 as tested (before destination fees). If you can live without things like the Revel Ultima audio, massaging seats and carpeted cargo area, a Ford Edge Sport with the 2.7L EcoBoost engine starts at $46,399, and can be had similarly equipped to the Reserve trim Lincoln for $52,899 by the time you add on the various equivalent options such as the panoramic sunroof and the 401A Package (which includes Driver Assistance technologies, enhanced active park assist, 180 degree front camera, heated steering wheel, heated rear seats, HID headlights and such) – about a $12,000 difference.

For those who place a premium on luxury, however, the redesigned MKX makes a far bolder statement than even a well-equipped Ford Edge, while remaining price competitive with its Japanese midsize luxury SUV competitors and costing significantly less than its German rivals. Whether it can lure more buyers from these luxury competitors than it loses to its Ford cousin remains to be seen, but for those in the market it certainly deserves a look, and the early sales numbers seem to indicate that a lot of luxury SUV buyers like what they see.

About Simon Hill
Simon Hill rebuilt his first engine, an air-cooled Volkswagen, at 14. He started writing professionally about cars in 2009 and was also the editor of Boat Journal magazine. He lives in Vancouver, BC.
You may also like
8.0
AdChoices
Latest Articles
﻿