With the keys to an all-new 2016 Hyundai Tucson in my hand, I searched Hyundai’s parking lot for my test vehicle. All I could see was a Hyundai Santa Fe, but strangely, when I pressed the unlock button on my key fob, the lights of the Santa Fe blinked. “They’ve given me the wrong keys,” I thought. I was wrong.

Compared to key competitors such as the Honda CR-V, Ford Escape and Toyota RAV4, the Tucson is slightly lower, wider and shorter in length - although it looks bigger!

It was the new 2016 Tucson. Just to be sure, I checked the badge on the tailgate. Yep, Tucson Limited 1.6T AWD.

From its three bar hexagonal grille, bumper design and wraparound headlight covers to its upswept rear side windows and its inward-tapering tail lights, the 2016 Tucson’s styling is clearly a design grab from the Santa Fe. Hyundai’s marketing gurus must have decided that the family resemblance would help them sell more vehicles. But, I suggest, at the cost of its individuality. Does anybody care? That remains to be seen. 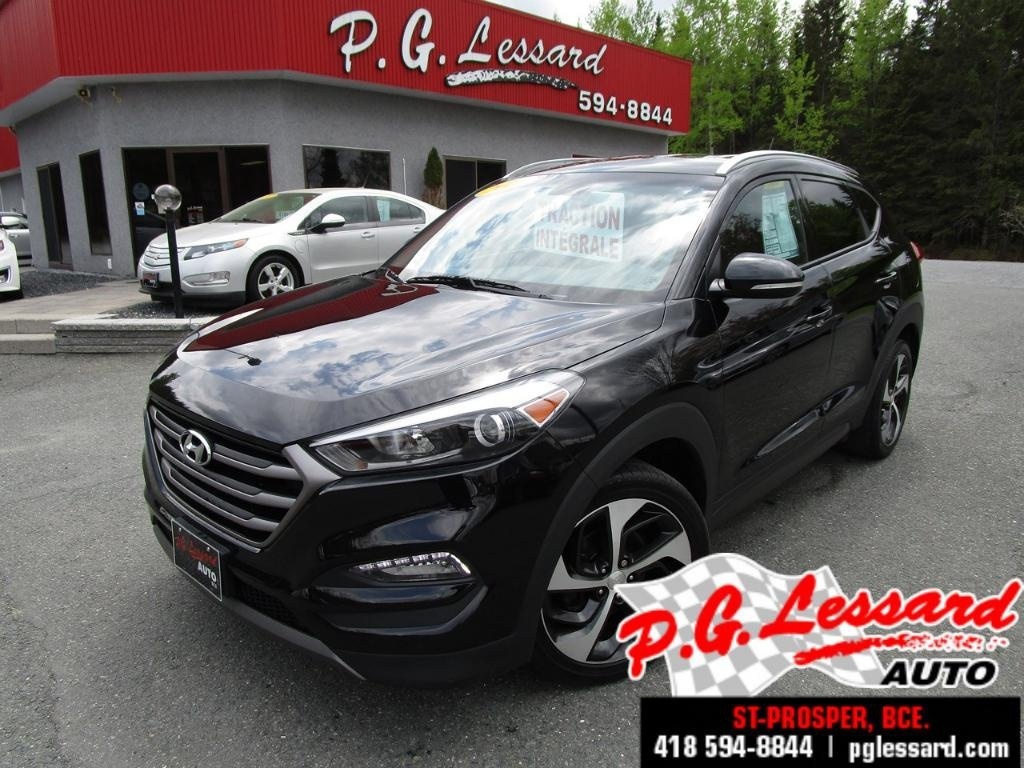 Compared to key competitors such as the Honda CR-V, Ford Escape and Toyota RAV4, the Tucson is slightly lower, wider and shorter in length - although it looks bigger!

Last year’s base 164 hp 2.0L four-cylinder engine is carried over but the previous 184 hp normally-aspirated 2.4L four has been supplanted by a new 175 hp turbocharged 1.6L. This is on par with most of its competitors with the notable exception of the Ford Escape Titanium with its 231 hp 2.0L turbocharged engine.

The disappearance of the standard manual transmission has bumped the base price up from $21,299 to $24,399 with the now standard automatic transmission, but overall 2016 price increases appear modest given that it is an all-new vehicle with additional features. It’s difficult to determine exact price jumps because Hyundai has changed the Tucson’s trim level designations: instead of GL, GLS and Limited, the 2016 Tucson is offered in base, Premium, Luxury, Limited and Ultimate trim levels. The 2.0L is available in the base FWD, Premium FWD/AWD and Luxury AWD trims while the 1.6T engine comes only with the Premium AWD, Limited AWD, and Ultimate AWD trims.

Our Tucson AWD Limited test vehicle came with the new 1.6L turbocharged four cylinder engine and seven-speed dual clutch automatic transmission. Though the new turbo engine is down slightly in horsepower compared to the 2.4, it has considerably more low-speed torque: the 1.6T pumps out 195 lb-ft from 1,500 to 4,500 rpm vs the 2.4’s 177 lb-ft at 4,000. Put your foot down and the turbo boost comes on quickly. The new Tucson is more responsive on take-off, when changing lanes in city traffic, when accelerating onto the freeway and when speeding up to change lanes on the freeway.

Fuel economy has improved with the new 1.6T engine and it still uses Regular Unleaded gasoline. EPA numbers are 9.8 city/8.4 hwy/9.0 combined. That compares to the 2015 Tucson AWD 2.4L with 11.8 city/9.4 hwy/10.0 combined. Still, my Tucson’s average fuel consumption display was showing 10.3 L/100 km. As I discussed in my recent review of the Ford Escape 1.6T, smaller turbocharged engines tend to work harder and use more fuel than their small sizes would suggest.

2016 Tucsons again feature three driver-selectable performance “Drive” modes: Eco, Sport, and Normal. Designed to save fuel, Eco mode feels pathetically slow. Throttle response on take-off is weak and gear changes keep the transmission in as high a gear as possible to keep engine revs low. Normal (default mode) provides acceptable everyday driving performance that will get you there but won’t get you excited Sport mode makes the Tucson come alive with quicker steering response, faster acceleration and more aggressive shift timing (but worse gas mileage). The idea is that you can choose the drive mode to suit the terrain, your mood or your conscience. I liked having the choice.

While front-wheel drive is standard in base and Premium trims with the 2.0L engine, all-wheel-drive is standard in all Tucson trims with the 1.6T engine. As before, it’s an on-demand system that runs 100 percent front-wheel drive until wheel slip is detected, and can send up to 40 percent of the engine’s power to the rear wheels through an electromagnetic multi-plate clutch. When cornering, the AWD system improves cornering grip by braking the inside rear wheel and sending more torque to the outside rear wheel. It’s all completely automatic and seamless and is worth the $2,300 premium (where optional) for the added safety benefits in poor weather conditions. For deep snow, gravel or mud, the Tucson also includes a driver-selectable differential lock that fixes front/rear torque distribution at 50/50 at low speeds. It’s activated by a button on the console.

The Tucson also has a driver-selectable Downhill Assist which automatically slows the Tucson when descending a very steep hill. This is something you might use on an unpaved road on the way to the cottage or a steep and slippery driveway. You don’t want to go too far off the pavement though. The Tucson is a mall-friendly crossover not a rock-climbing 4X4. Its ground clearance of 162 mm is not conducive to off-roading and is actually 8 mm lower than the previous Tucson’s.

Replacing the Tucson’s traditional six-speed automatic transmission is a new seven-speed dual clutch transmission. It changes gears very quickly and smoothly but as with other dual-clutch trannies we’ve tried, there is some hesitation in first gear. At slow speeds as you come to a stop or start up a hill, it slides or slips as it engages first gear, then pulls away strongly. You might think there’s something wrong with the transmission, but there isn’t.

With its wider track, lower height, fully independent suspension, and standard 245/45R19-inch all-season tires, the 2016 Tucson has a solid, substantial over-the-road feeling with steady handling, stable straight-line tracking, and a comfortable ride. Despite being a larger vehicle, the new Tucson has the same turning circle as before: 10.6 metres. At speed, there’s not much tire or wind noise, but the engine exhibits a muted coarse growl on acceleration.

In the driver’s seat, visibility to the front and sides is clear but over-the-shoulder visibility is limited by a small third side window. That’s partly solved by standard blind spot warning lights in the side mirrors accompanied by warning sounds when cars occupy the blind spots. As well, a rear cross-traffic alert system sounds a warning if a car is approaching laterally from behind. As the driver cannot look in both directions at once when reversing, the cross-traffic alert system is very effective in spotting vehicles that approach without warning. This happened to me twice in the week that I had the vehicle. The Tucson’s rearview camera is also a godsend when backing into or out of a tight parking space as are rear parking sensors (available on the Limited and Ultimate trims).

Top-of-the-line Ultimate 1.6T models include lane departure warning, collision warning and automatic emergency braking that can even detect pedestrians at lower speeds. The emergency braking system is able to bring the Tucson to a full stop if a collision is imminent and the driver takes no action.

With four large doors, the 2016 Tucson is easy to get in and out of but there is a small door lip to step over. The cabin feels roomier than last year because of its extra width, and there’s plenty of headroom and adequate legroom and footroom for front and rear (outboard) passengers. Though it’s smaller than the even-roomier Santa Fe, the new Tucson has more passenger volume (2,894 L) than key competitors like the Honda CR-V, Nissan Rogue, Toyota RAV4 and Ford Escape.

The Tucson’s front seats are wide and comfortable and include seat heaters with three temperature choices. In the Limited trim, the driver’s seat includes power height, fore-aft, recline and lumbar while the front passenger seat has power height, fore-aft and recline. The rear seats aren’t as comfortable: the cushions and backrests are firmer than the front seats’. However, rear seat heaters are available, the split rear seatbacks do recline individually, and there is a fold-down centre armrest with two cupholders. Rear air vents provide fresh air while a seatback pocket provides a place for magazines, iPads and candy wrappers.

The quality of the interior materials in the new Tucson has improved and everything looks very attractive and well-made. I liked the soft-touch upper dash surfaces, grippy leather-wrapped steering wheel, discreet silver and piano black trim, comfortable perforated leather seats, brightly-lit gauges and large centre touch-screen. My interior was black but the Tucson is also available with a grey or beige interior.

Between the illuminated tachometer and speedometer is a small display that shows vehicle information such as range, average fuel economy, radio station, compass, user settings and service intervals. A menu button on the right steering wheel spoke allows the driver to scroll between screens to find what they’re looking for.

The big eight-inch centre touchscreen displays audio, phone, navigation, and setup information in a readable size, but not climate control. It’s a touch-screen only - there is no console dial controller like iDrive. However, main menu items like Media and Navi are still regular pushbuttons just below the screen. Some functions, like audio volume and station search, can be activated using the buttons on the steering wheel. One nice feature of the screen is that the driver can choose a split screen that allows both navigation and audio to be displayed at the same time.

Just below, a dual-zone automatic climate control system has its own small blue-on-black screen showing temperature, fan speed, ventilation and big dials for temperature along with large legible buttons. My Limited model even had a steering wheel heater.

At the bottom of the centre stack is an open tray in front of two 12-volt sockets, USB port and auxiliary port. You can charge your phone or music player here but if you leave your phone behind, it’s visible from the outside. Still, being visible, you’re probably less likely to leave it in the vehicle.

Between the front seats is a padded armrest which flips up to reveal a deep storage bin that’s not quite big enough to store an iPad. There are no powerpoints or ports inside.

In the Limited trim, the large rear liftgate can be opened and closed remotely with the keyfob and the liftover height is low for easier loading. The cargo compartment has a lined floor and rear seatbacks but the sidewalls are plastic, and there’s no bumper protector on the body-coloured rear bumper either.

With an as-tested price of $38,544 including Freight and PDI, the Tucson Limited 1.6T AWD is at the high end of the price ladder when compared to comparably-equipped SUVs such as the Honda CR-V EX-L, Toyota RAV4 Limited, Mazda CX-5 GT and Nissan Rogue SL. Granted, the new Hyundai Tucson Limited looks, feels and drives like a premium SUV, but is it worth more than the best-selling favourites? That may be a tough sell.

About Greg Wilson
An automotive writer for over 30 years and co-founder of one of Canada’s first automotive websites, Greg Wilson has moved into the editorial slow lane and now contributes occasional vehicle reviews and features to autoTRADER.ca’s editorial section. Greg is a member of the Automobile Journalist’s Association of Canada.
Follow me
You may also like
AdChoices
Latest Articles
﻿