As a successful rapper – no wait, even I can't say that without laughing. But check these rims, son! Twenties on my 'Yota, ya heard? What you think I rap for, to push a four-cyl RAV4? Venza for life, yo! *complicated gesture involving mild finger dislocation*

Well anyway, here's a wagon version of the Toyota Camry with 20-inch rims. What a world.

It's just a matter of time before your mixtape finds its way into the right hands.

Some years ago, a wise man named Ludacris (shout-out! That's a rapping thing, right?) once bragged about the diameter of the alloy wheels on his particular motor vehicle. At the time, a twenty-inch rim was a showy extravagance, the kind of “bling” only found on the “whip” of a true “baller.” Starting to feel a little bit like Dr. Evil over here. I'm still hip! I'm with it!

However, the tenets of modern design now include swathes of sheet metal that require big-ass dubs to balance things out. Thus we have 19-inch alloys as the base offering on the Toyota Venza, a machine you can get with a 184-hp four-cylinder engine, and 20-inchers as standard on the V6 version.

And that's a bit of a shame. The Venza is positioned to be a slightly more upscale offering than either the RAV4 or the Highlander, vehicles it sits between in terms of sizing and price, but it's not a premium vehicle, and the two main issues with having wheels this big – the cost of replacement tires and a tendency for unsprung weight to negatively impact ride and handling – will affect the regular consumers shopping the Venza against something like a Subaru Outback.

Still, you should be able to fit much smaller rims on come winter time as the brakes aren't particularly large – 17-inchers will work. And perhaps it's just a matter of time before your mixtape finds its way into the right hands. 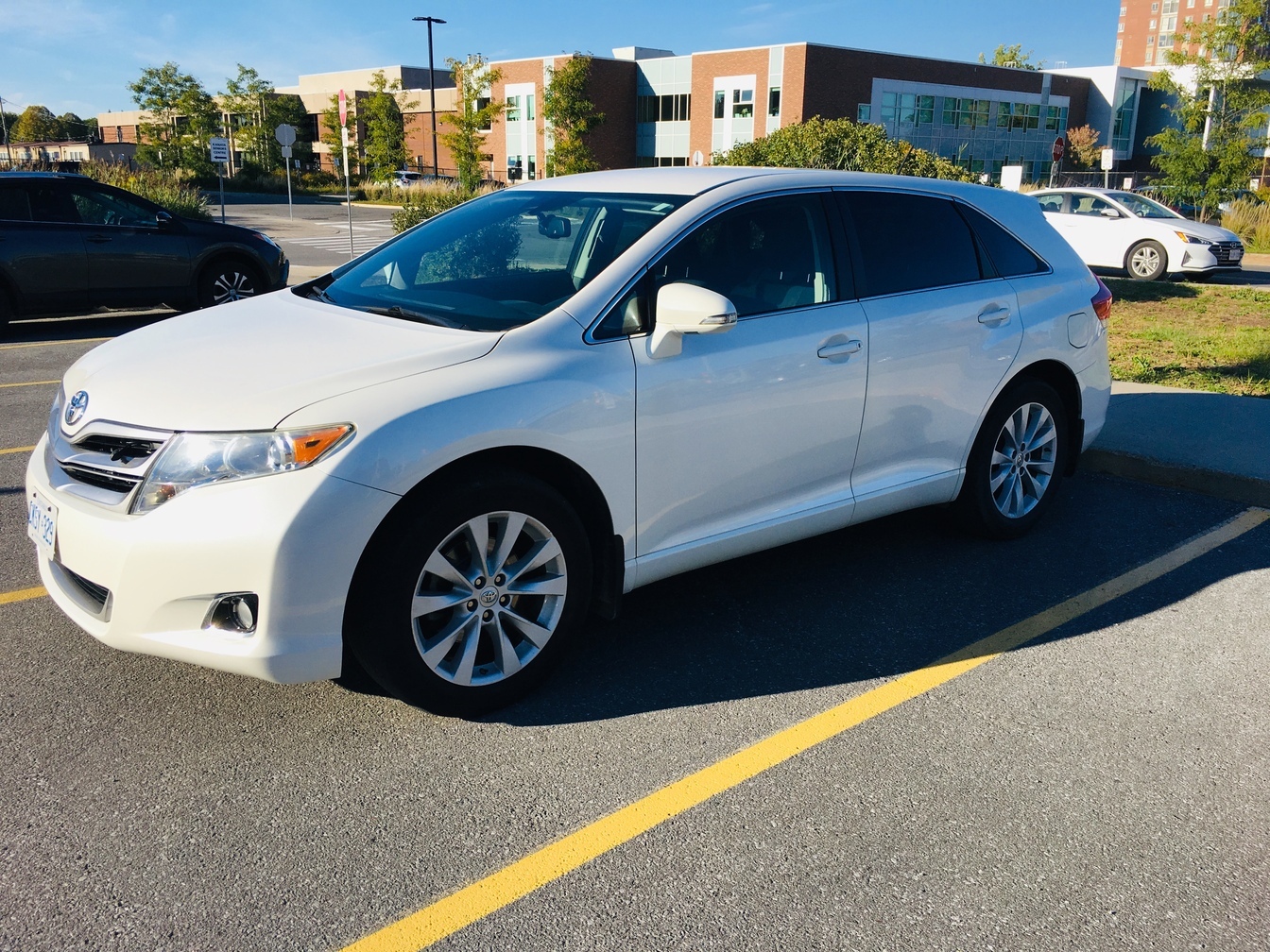 The Venza is coming up for seven model years old now, with a facelift that's now three years old. Still, it does look pretty good overall, something like a less-puffy Sienna, and should continue to age well.

Sadly, the same cannot be said of the interior, which looks every bit of that seven years old. It's not a question of durability or quality, merely an older design that's heavy on the plastic, and somewhat plain. We don't need soft-touch materials everywhere, but just look at how Toyota's improved the inside of their Highlander to see what could be done better here.

Which is not to say the Venza's insides aren't clever. The large sliding section of the centre console has a huge amount of storage, and there's a spring-loaded section with a pass-through to hold your smartphone. The infotainment functions, controlled through Toyota's Entune system, are displayed on a 6.1-inch screen that's a little too small by current standards, but it is a straightforward system to use, and I didn't have any issues setting things up, or using Bluetooth streaming audio. The navigation is simple, but it works; the 13-speaker JBL premium audio has plenty of punch.

Because it's laid out primarily as a five-seater, the Venza feels like it'd be a good fit for a family that's outgrown their RAV4, but doesn't want something as big and ponderous as the Highlander. It's got plenty of room for adult-sized passengers in back, and the way the panoramic sunroof stretches out over the rear seat brightens things up a bit. Trunk space is good, too, at 870 L with all five seats deployed and just about 2,000 with them folded flat. Two latches in the rear flop the seats forward.

Not quite the flexibility of the Highlander, but enough to make for a useful family hauler. Add in a towing capacity of 1587kg with the V6, and the Venza is pretty much all the car you need. It's got the practicality of a Camry wagon, the slightly higher ride height that most people want for ease of ingress and egress, nice comfortable seats, and all-wheel-drive. A plasticky interior isn't a deal-breaker, not with that Toyota reliability, right? Well, there are other Toyota attributes.

Chief among them is that the Venza is quite dull to drive. The ride gets busy over choppy pavement, thanks to those big heavy wheels, but the rest of the time it's smooth, and a little wallowy in the corners. The steering isn't completely overboosted, but there's not much sense of what's going on with the front wheels. It's also a little underbraked, given the weight – not dangerously so, but the V in Venza isn't for Velocity. It's a cruiser, not a corner-carver.

All of these are pretty common complaints about Toyota products, and don't seem to make much difference to buyers – not every car needs to be a Lotus Evora. However, I do have a few issues with the powertrain that could stand an update.

Toyota's V6 is great. It displaces 3.5L, produces 268 hp, and combined with an unremarkable six-speed automatic transmission gets essentially the same highway fuel economy as the four-cylinder version, and isn't far off on the city. Official ratings are set at 12.8 L/100 km in city and 9.3 L/100 km, with observed fuel economy in mixed driving was right at 11 L/100 km. For a pretty hefty sportutilitywagoncrossovervan, that's not bad at all.

However, the all-wheel-drive system on the Venza is still the old slip-and-grip, and that's literally what it does. On a typically damp West Coast day, I ran the car up the Sea-to-Sky, finding little issue with the overall drive, but being slightly irritated at the Venza's scrabbling when a quick right hand turn into traffic was required. Toyota's mostly fixed this on their Highlander, so look for that update to come soon.

Really, that's the takeaway lesson here. The Venza is a decent car overall, with styling that still appeals from the curb. However, it's been eclipsed by newer offerings from other manufacturers, what with the Outback and Murano now arriving in dealerships. Heck, you don't even need to leave your Toyota showroom to find slightly better value in the Highlander.

The trappings once bragged about in rap videos have faded, and likewise time has started to pass the Venza by. It's time for Toyota to roll out a new one of these things, dawg. You can't stay fresh if you don't innovate, T-Vizzle – a little less bling, and a little more flow.

About Brendan McAleer
Brendan McAleer is a Vancouver-based automotive writer, a member of AJAC and a ginger.
Follow me
You may also like
6.6
AdChoices
Latest Articles
﻿