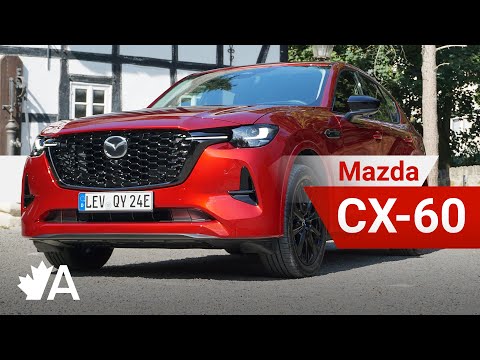 The automaker’s latest small crossover provides a glimpse of what’s to come.
Advertisement

The automaker’s latest small crossover provides a glimpse of what’s to come.

OK, that’s not entirely true, but with the similarly sized CX-5 and CX-50 models already on the market, there are no plans to offer this two-row crossover in Canada. Even so, this all-new model represents a significant shift for Mazda, with the CX-60 ushering in new powertrains and, just as importantly, a new platform that will underpin a pair of slightly larger models that are set to arrive in the not-too-distant future.

While most mainstream crossovers like these favour a front-wheel drive bias and horizontally-mounted motors – that is, ones that span the engine bay from side to side – Mazda has developed a new platform that favours the rear wheels. This is entirely by design, as the automaker continues with its push towards the premium end of the market, with a similar layout to those employed by brands like BMW and Mercedes-Benz.

Similar to entries such as the BMW X3 or Mercedes GLE-Class, Mazda’s new platform prioritizes powering the rear wheels while the engines are of the inline variety and are oriented in a straight line pointing from the dashboard to the front bumper. Fear not: these will still be equipped with all-wheel drive; but rather than driving the front ones in the name of efficiency when four-wheel traction isn’t required, motivational force will head rearwards.

It leads to noticeable enhancements to agility and responsiveness – long-standing Mazda hallmarks, but ones that stand out that much more with this European-inspired setup. Think of it as driving force in the truest sense of the words; torque, which is the stuff that gets a vehicle moving, is pushing at the rear wheels rather than pulling at the front ones. It provides a little more refinement to the power delivery, which is always welcome.

As the entire auto industry pushes towards electrification of varying degrees, these new Mazda models – the CX-60 that won’t be coming to Canada, as well as the larger CX-70 and CX-90 that will – are ushering in a new range of powertrains that add some electrons to go with a gas engine.

It’s part of the brand’s incremental move towards full-scale electrification that it calls its “multi-solution approach.” Like a series of stopgaps before all-electric powertrains are used across the lineup, the concept involves a new generation of gas engines that are paired with mild-hybrid, conventional hybrid, and plug-in hybrid (PHEV) components.

In the case of the upcoming CX-70 and CX-90 models, the former involves a new inline six-cylinder gas engine – another nod to premium brands like BMW and Mercedes – while the latter uses a modified version of the brand’s 2.5L four-cylinder found in existing products like the CX-50.

Mazda is far from the only automaker to offer PHEV power in small- and midsize crossovers; there’s Toyota, of course, and its popular RAV4 Prime, while sister brands Kia and Hyundai each have a pair of plug-in hybrids to pick from, and Mitsubishi is finally introducing a new gas-electric Outlander.

For Mazda, the PHEV plan differs a bit from those of its peers, with an electric motor sandwiched between the gas engine and transmission, and a battery pack that spans the entire passenger area floor rather than being tucked under the rear seat. Once again, it comes down to driving dynamics, with the location of the battery and related components low in the vehicle (and between the wheels) leading to agility enhancements that other automakers might not be as concerned with in crossovers like these.

Also unique, at least next to Toyota, is the deliberate decision for the transmission to be of the conventionally geared variety rather than continuously variable in nature, while the electric motor’s location means its torque is channelled directly through the eight-speed automatic.

A brief test drive of the 2023 CX-60 in western Germany near Mazda’s European headquarters quickly showcased the merits of such an arrangement, with the powertrain operating with little indication of its dual-source nature. While most PHEVs noticeably switch between gas and electric propulsion, it was only when this one was deliberately set in its electric mode – as well as the occasional clunky transition – that there was any notion of how it all works.

Passing power is abundant, too – and that’s not a trait that’s typical of PHEVs like these. Even the Kia Sorento, which uses a six-speed automatic transmission along with a slightly smaller turbocharged engine, sounds strained when additional accelerating force is requested. Not here, though, with all kinds of confidence when surging ahead through unrestricted stretches of the Autobahn.

Beyond the familiar way the transmission behaves, which undoubtedly helps this heavy crossover feel quick and full of poise when passing or pulling onto the highway, there’s simply a whole lot of output to work with. While final numbers for the CX-70 and CX-90 may differ slightly, the CX-60 generates a combined 323 hp and 368 lb-ft of torque. The latter figure is what’s to be expected from a traditionally torquey diesel engine, with all that grunt helping shove this CUV ahead in a hurry.

Even more so than output, efficiency numbers will differ by the time this powertrain is tested for Canadian use, thanks to notoriously generous European testing standards. Even so, it offers a seemingly achievable 63 km or so of all-electric driving range thanks to the 17.8-kWh battery pack, while combined fuel consumption figures in the range of those Toyota, Kia, and Hyundai rivals – 6.0 to 7.2 L/100 km – should be achievable. Impressive Agility, but a Little Misbehaviour

The responsiveness of the rear-biased platform is immediately noticeable from inside – and not just from the driver’s seat, either. It plays up the premium sensation Mazda is striving for here, with distinctly upmarket driving manners. The CX-60 proved nimble on the winding country roads that made up a portion of this test, reacting quickly to steering inputs with little resulting body motion.

Where it perhaps fell short of expectations set by Mazda was ride quality – not that it was uncomfortable, but rather it didn’t quite jive with all that the brand’s reps were bragging about. Attention to detail has long defined Mazda’s engineering accomplishments, and so with this new platform came suspension tweaks intended to improve the way the vehicles that use it behave over imperfect surfaces.

The suspension layout has the shocks and struts oriented in the same direction – all tilted a few degrees rearward – while the so-called “pitching centre” is technically behind the CX-60. It’s all supposed to initiate direct up-and-down body motion over bumps rather than the vehicle bucking forward and back, but its behaviour wasn’t quite in keeping with the expectations set by all the tech talk prior to this test drive.

Of course, this isn’t the exact vehicle that’s on its way to Canada, so expectations should be set accordingly. More importantly, the PHEV powertrain is very good – and very Mazda. This is a brand that goes about its business just a little differently than the rest and it shows, with a somewhat unique approach to hybridization here.

The inverse engine layout, rear-biased platform, and eight-speed automatic transmission – which, by the way, does without a torque converter to reduce efficiency loss and, in turn, how much fuel is consumed when accelerating – all give the 2023 Mazda CX-60 a slightly different feel than the average plug-in. They also provide plenty of reasons for optimism for the brand’s new crossovers that are on their way to the Canadian market in the near future.