photos by Heather Bashow, Jacob Black and courtesy of CSBK

I am sitting on the asphalt about a metre from the apex of the corner. I look past my boots and watch my Kawasaki Ninja 300 slide across the pavement in front of me. I see the green smear appear on the track, and watch with bemusement as the frame slider catches in the dirt and bends down, smashing fibreglass fairing as it goes.

It had been one out lap and three corners, on a damp track, on brand-new tires. I knew to avoid the concrete patches – I just didn’t.

And yes, regular readers will know that my first foray into the Canadian Superbike Championship Kawasaki Ninja 300 class ended with a spectacular crash last summer. So that means less than two laps between my last crash and this one.

I am le stupid. 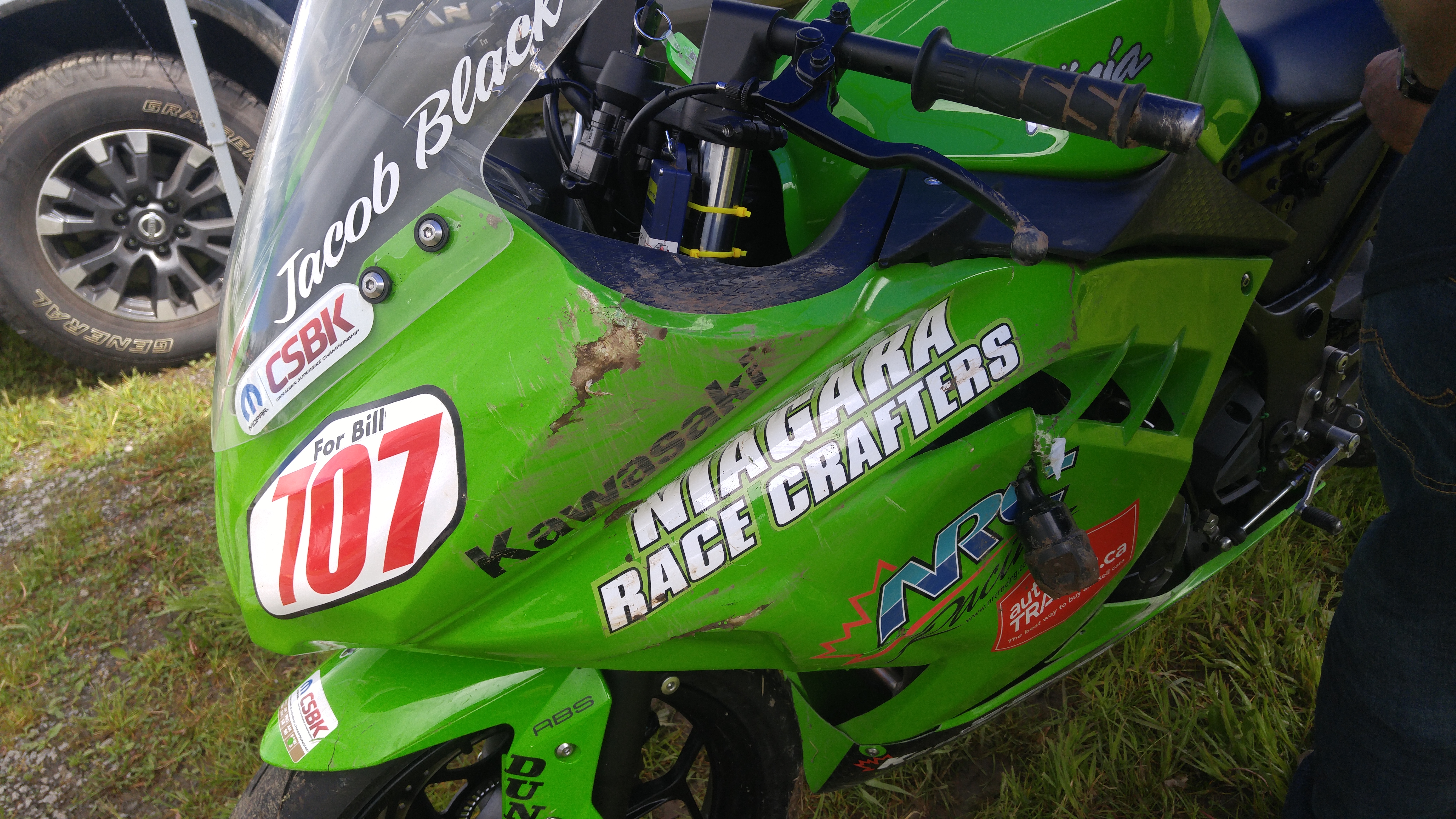 In fairness, it was a pretty standard rookie error – in fact, one of the faster young guys who’ve been racing for five years made the exact same mistake later in the weekend – but still it wasn’t the ideal way to start my season. Luckily, the damage was all cosmetic and I was able to get back on it. And even before my bike had stopped sliding, I was doing the postmortem, learning from my mistake.

Lessons? Avoid the concrete – especially in the damp conditions. Methods? Turn in later, square my line, so I don’t risk running over the concrete on the way in or drifting out to it in the middle. Applying those lessons worked, and I only crashed once that weekend.

Though mistakes did creep in elsewhere.

But let me back up a bit. How did I get here?

After racing on a media bike in 2016, I caught the bug big time and after a while of wearing her down, my wife relented and allowed me to buy one of the little race-prepped Kawasaki Ninja 300s for my very own. Of course, I live in a downtown condo, so I partnered with Larry at Niagara Race Crafters to look after and run my bike for me during the season.

The fact he’s a four-decade racing veteran didn’t hurt either. 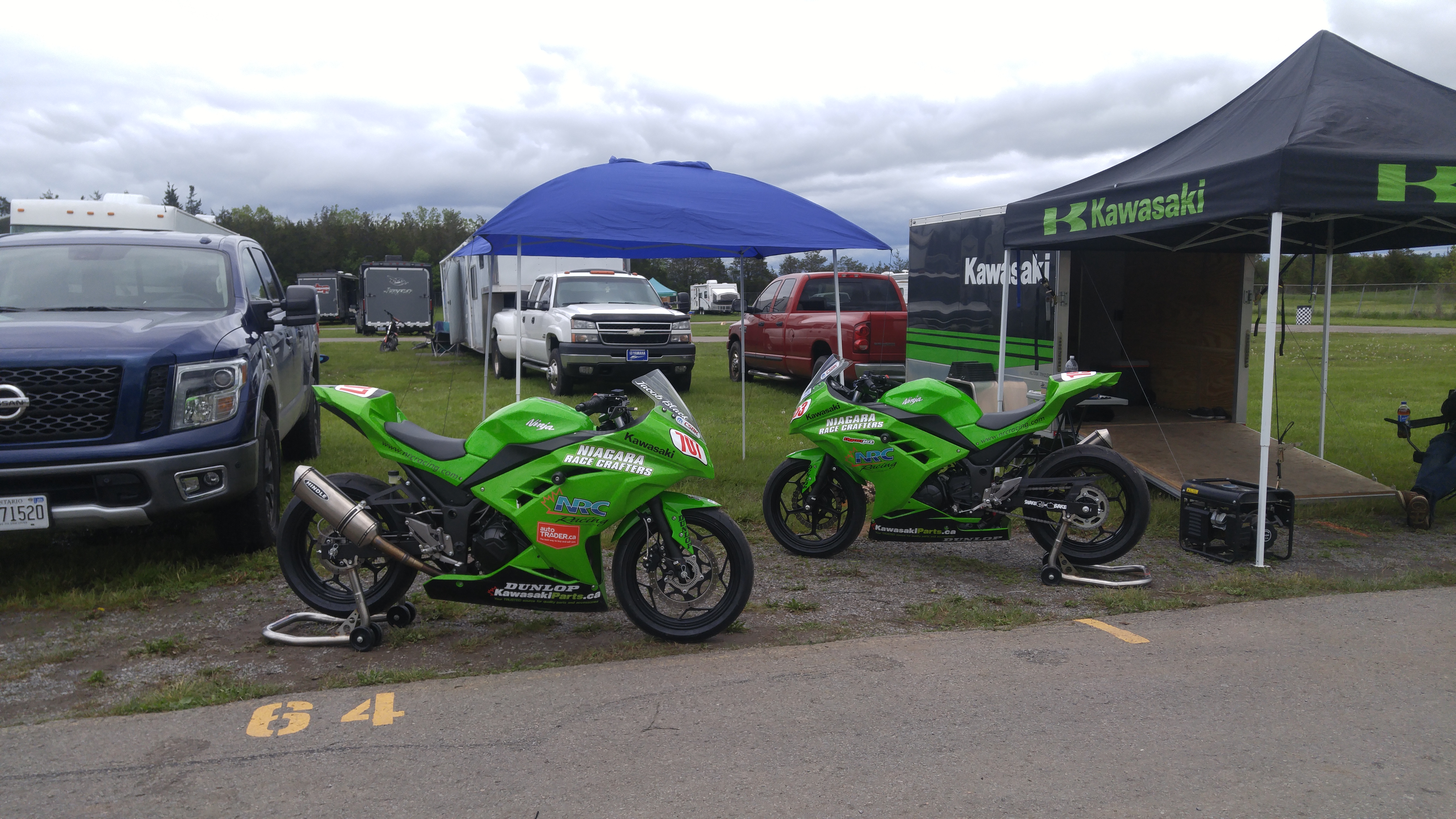 And this is how I found myself on the grid at Shannonville Motorsport Park for Round 1 of the 2017 CSBK Season. I’d entered in two classes, the National Ninja 300 series and the regional RACE Mopar Express Lane Light-Weight Production Class. This method of ensuring maximum track time was designed to help me get up to speed faster.

My team wasn't planning on coming up til Friday, and I wanted to use the Thursday open lapping day as a practice run. I went down to Niagara and loaded my bike into the back of a a 2017 Nissan Titan Pro-4X for the job, only to arrive and find a thunderstorm that sat over the track for the entire day – so much for that idea.

My crash cut short one of my Friday practice sessions, giving me precious little time to learn the track. So I was lucky I entered both classes.

I qualified last for the Saturday morning qualifying session, and started that way for both of the Saturday races. 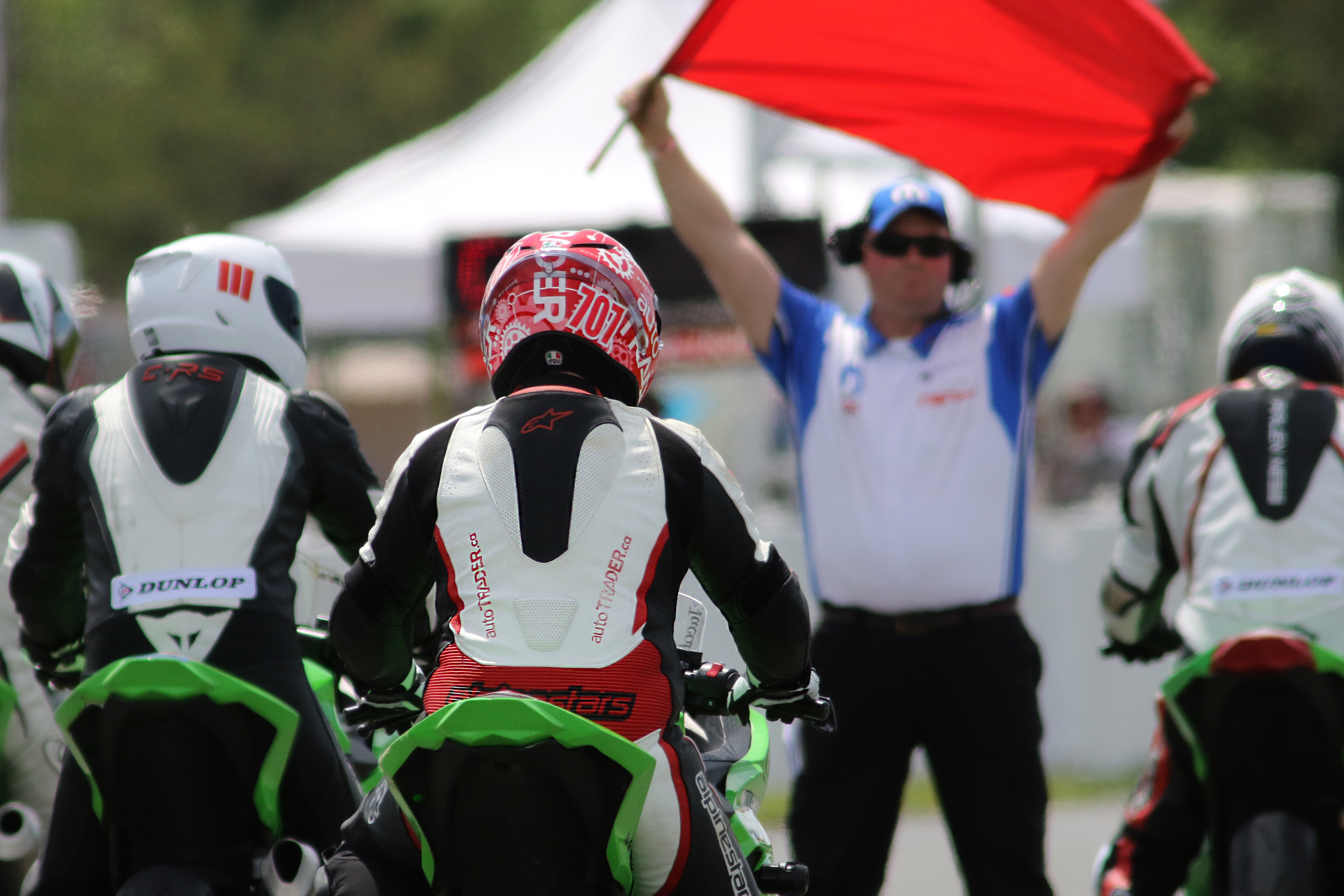 My start in race one of the regional series saw me jump from eighth to sixth before the end of turn one, where I settled into a rhythm ahead of the two riders behind me. On lap five of eight, I was passed in the draft on the back straight, and my efforts to reclaim sixth on the next lap saw me run off down the escape road. I rejoined unharmed, but last place was my reward for my mistake.

The second race of the weekend saw me again make up spots on the way into turn two, and again get passed in the draft. I settled for second-last of 11 riders, much to the delight of my daughter in the stands.

Her cry of “Yay! Daddy didn’t finish last” made one bloke just about fall of his motorbike he found it so funny. 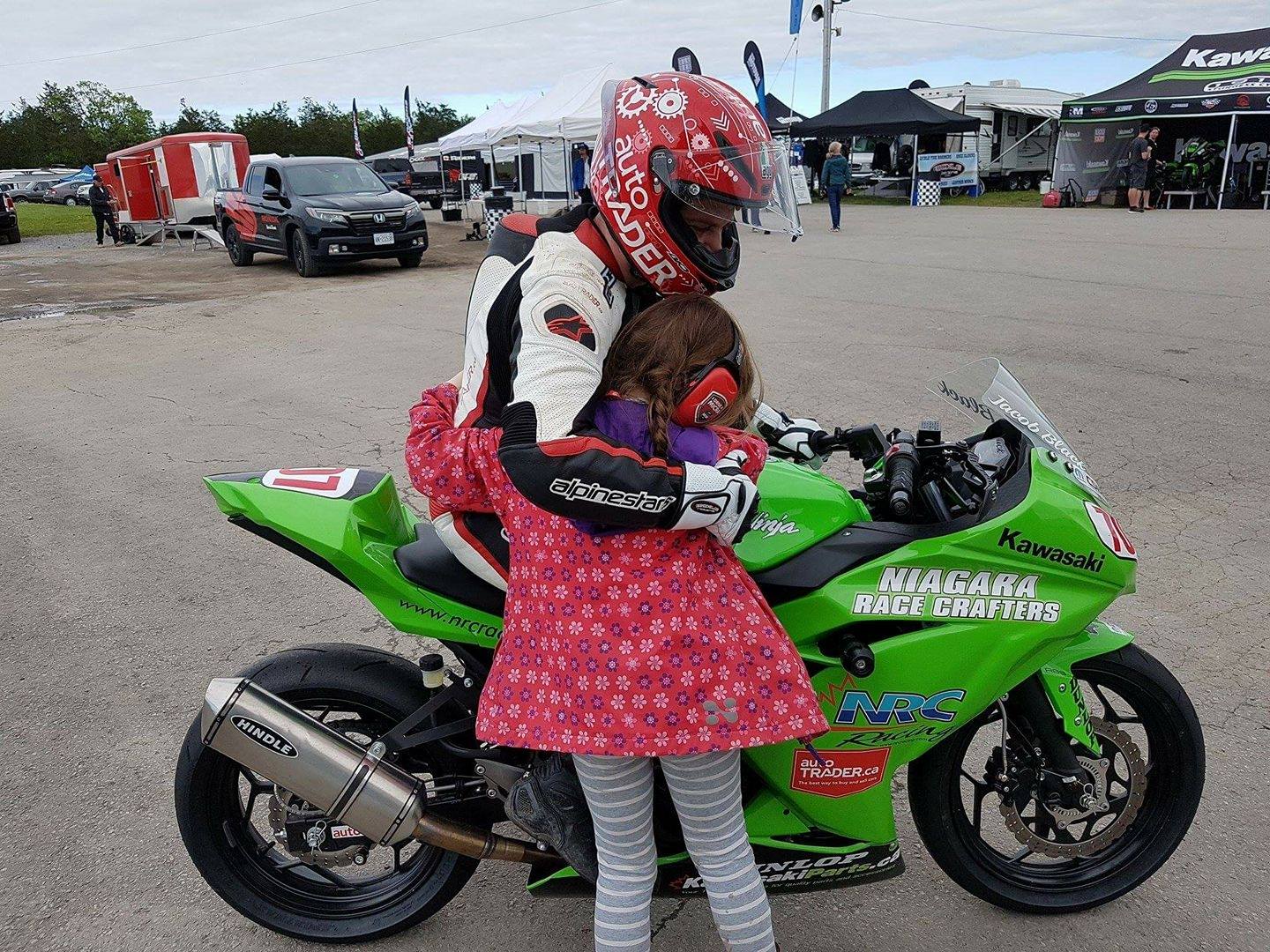 Sunday was hotter, and with more grip in the track I was determined to push harder. This time I managed to stick closer to my NRC Racing teammate, Harold Peters in the early laps, and ran as high as seventh after young gun Jared Walker crashed. Walker rejoined though, and passed me shortly before Adolfo Silva also hunted me down and made a clever pass at the end of the back straight.

Ninth – or third-last – may not be impressive, but as the only rookie in the field and the only one new to Shannonville I was pleased with the effort.

That left only one more race for me to improve my performance in. My launch off the eight-rider grid had me in fifth briefly, before I was passed by Kirk Shergold mid race. When Kirk ran off track briefly on the next lap I sensed an opportunity to get by, but spooked myself at the end of the main straight and for the second time in four races found myself using the escape road to rejoin dead last. 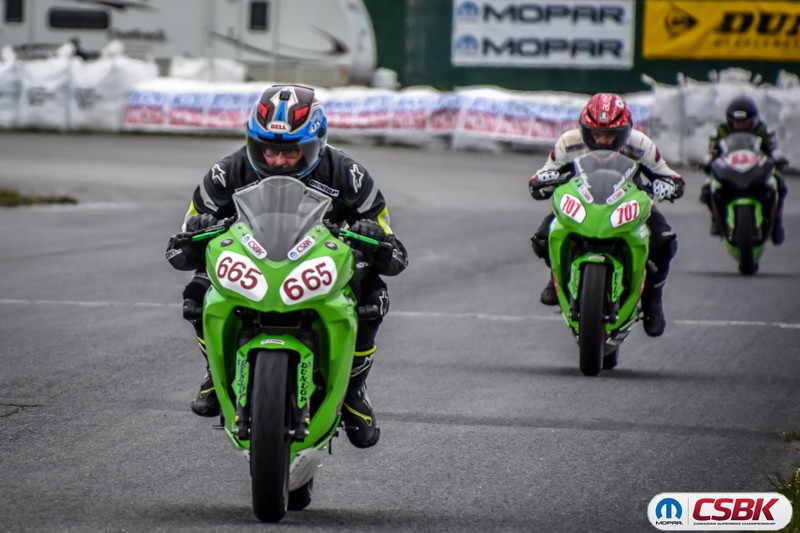 I hunted down Stanley Moran for seventh in the dying laps to finish “not last”.

My times went from a 1m44s in the opening sessions to dipping into the 1m23s bracket by the final race of the weekend. With Jared Walker doing alien-esque 1m18s out the front, the next group were steadily in the 1m20s–1m21s bracket.

My target for the next round at Grand Bend in two weeks’ time is to be among that pack.

Also: to not crash.