A crash course on race track physics – without the crashing
Advertisement

A crash course on race track physics – without the crashing

BOWMANVILLE, ON – After years of wishful thinking, you’ve finally acquired the keys to that Porsche 911 you’ve been dreaming about – and you’re thoroughly smitten. But you grudgingly admit, if only to yourself, that your primary motivation for Porsche ownership was self-gratification. So here you have it, your dream car, and it’s everything you ever wanted – and more.

And therein lies the rub.

While many Porsche drivers are perfectly content to cruise through the financial district, enjoying their just rewards, others come to the realization that there’s a bit more to their new purchase than a set of trophy wheels. Perhaps they’ve nailed the throttle on the on-ramp and been rattled to the core by an unexpected “code brown”, or maybe the thrill of negotiating an S-bend has awakened something deep within – and they want to know more.

So what’s a Porsche owner to do once they’ve realized their knowledge and skill set are sadly disproportionate to the sheer abundance of athletic ability beneath their new car’s lovely sheet metal?

Well, you could sign up for one of Porsche’s Driving Schools. We’ve chronicled our slippery escapades at the Camp4 Winter Driving Experience, Porsche’s Los Angeles-area Porsche Experience Center and the Porsche Grand Tour track-inclusive program several times within these pages. And now Porsche is offering their Sport Driving School (PSDS) for the very first time here in Canada. 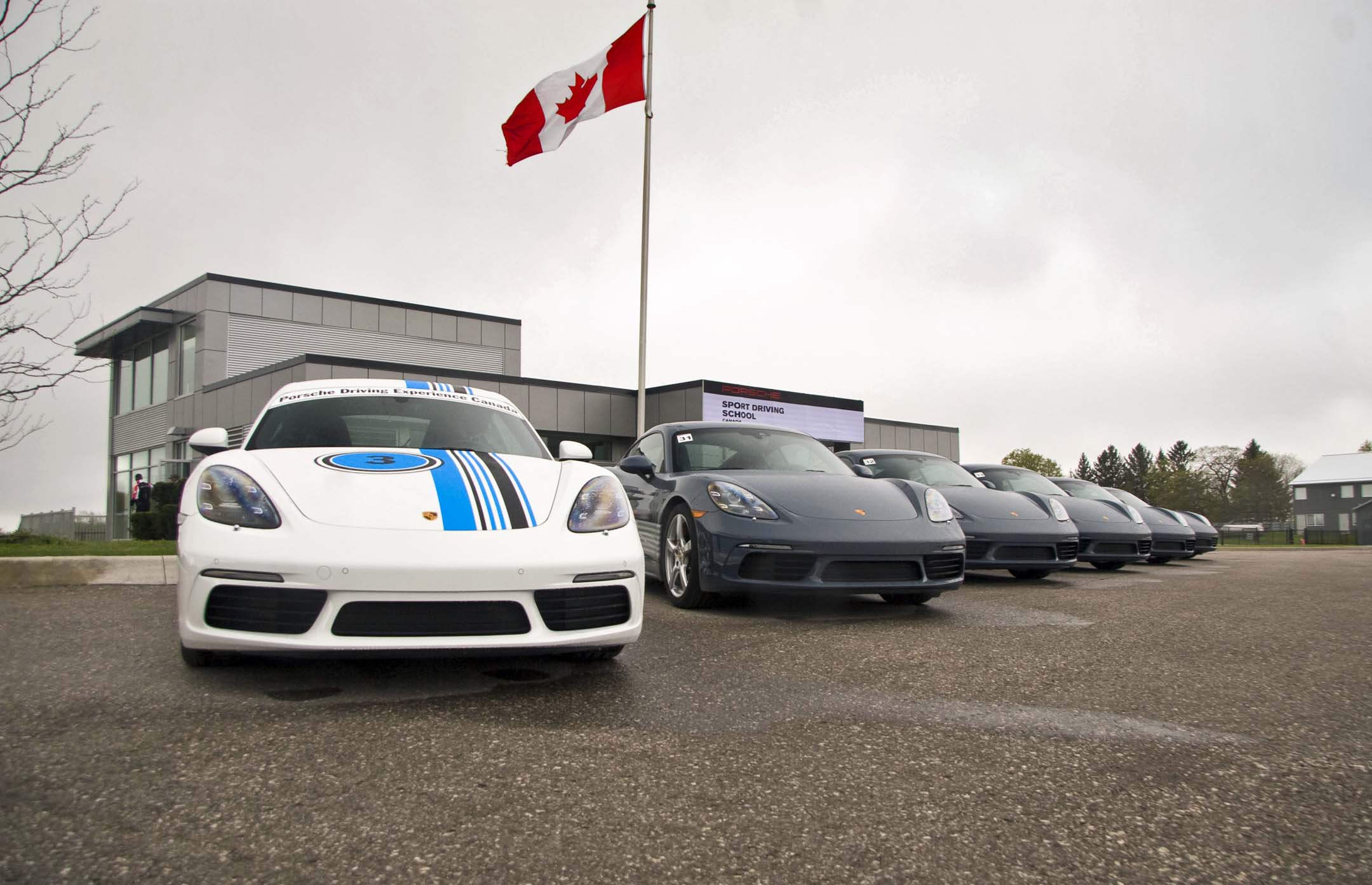 Although it began more than 40 years ago at Germany’s Hockenheimring race track, the school made its Canadian debut last week with a handful of auto writers as the first crop of students.

Beginning this May at the Canadian Tire Motorsports Park in Bowmanville, Ontario, it’s a two-day training programme designed with a number of objectives: to help Porsche drivers become better, safer drivers; to instill a love of driving and an appreciation for the Porsche legacy within current and prospective owners; and to further develop those who have a desire to pursue sports car driving at the competitive level.

“There are two benefits to coming here,” said Jonathan Urlin, Manager of Operations for Porsche Driving Experience Canada. “Number one, you can learn yourself what to do as a driver in those emergency scenarios; and number two, you can learn what these vehicles can do for you and what the technology can do for you. So to replicate that in this closed environment makes overall safer drivers, safer roads – and better use of these vehicles.

“I would love to see every Porsche owner come to this school.”

Porsche Canada doesn’t promote such advanced driver training to prospective Porsche owners, though, but leaves it up to individual dealerships to use as a marketing incentive if they so wish.

While the programme here will initially offer only the introductory level “Precision” course, eventually it will include the Performance, Master, Master RS and Master RSR courses offered in various markets around the world, which qualify the student for a racing license.

“It’s what we refer to as a ‘Career Concept’,” said Urlin. “A driver can come into an entry-level program like ours here, upon graduating from Precision [they] can enter into Performance, then Masters. After Masters there are various other programs: Master, Master RS and Master RSR, where [they] can get a racing license and elevate to compete in series such as the Porsche GT3 Cup Challenge. After the GT3 Cup, he can compete in European Series and so on.” 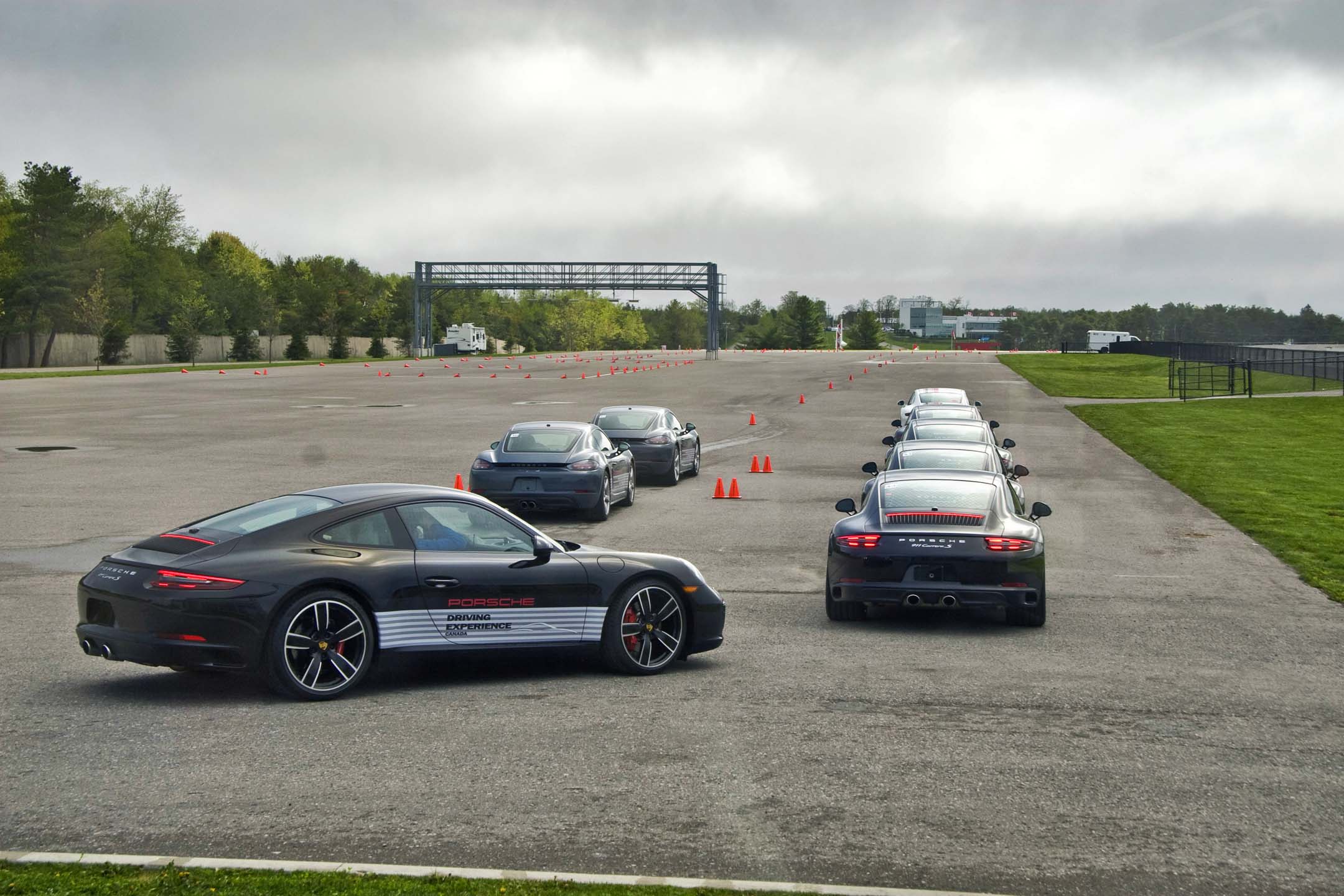 Precision being an introductory course teaching the basics, students begin with in-class theory discussions centered on safety, importance of tires, and the physics that govern all forms of motorsport driving.

After this comes advanced braking exercises, and some time on the skid pad, followed by an autocross slalom held in the parking lot before venturing onto the racetrack. The venue is CTMP’s completely redesigned Driver Development Track, a small but highly technical circuit whose safe run-off areas make it ideal for teaching drivers who are new to the idea of racing.

Led by a team of instructors, all of whom are weekend racers with many years of experience, the students practice emergency stopping in a straight line. It’s surprising how many novices are hesitant to apply full-force braking, unaccustomed to the noise of the ABS at work, and wary of the results such an extreme exercise will produce.

Finally they realize that not only are they, and the car, still intact, but they’re learning just how far these cars can be pushed. By the time they reach the acre of cones that define the auto slalom course, there’s a distinct sense of rivalry in the air, with drivers eyeing each other up before they take their turns in the start box.

Autoslalom, or autocross, is one of most valuable learning exercises in advanced driving, because it’s also the most fun. Drivers learn to relax and are immediately rewarded when they take what they’ve learned and actually put it in practice. Looking far ahead helps them react much quicker and become smoother. A smooth driver keeps the car settled; and a balanced car is not only safer – it’s faster.

Caught up the heat of the moment and blinded by the descending veil of red mist, one young driver blasts out of the start box, squealing rubber and leaving a trail of toppled cones in his wake. He’d forgotten the primary rule for driving techniques: in order to go fast, one must first go slow.

The “racing line”, or proper driving line, is of upmost importance in any kind of precision driving. Cars are at their happiest when the weight is divided equally amongst their four contact patches, i.e. tire treads. When navigating the looping dips and bends of a typical race track, the driver must also keep in mind that physics define the fastest way around the track.

Knowing when and where to tap the brakes and redistribute the car’s weight evenly to maximize grip is far more important than a heavy foot on the gas pedal. 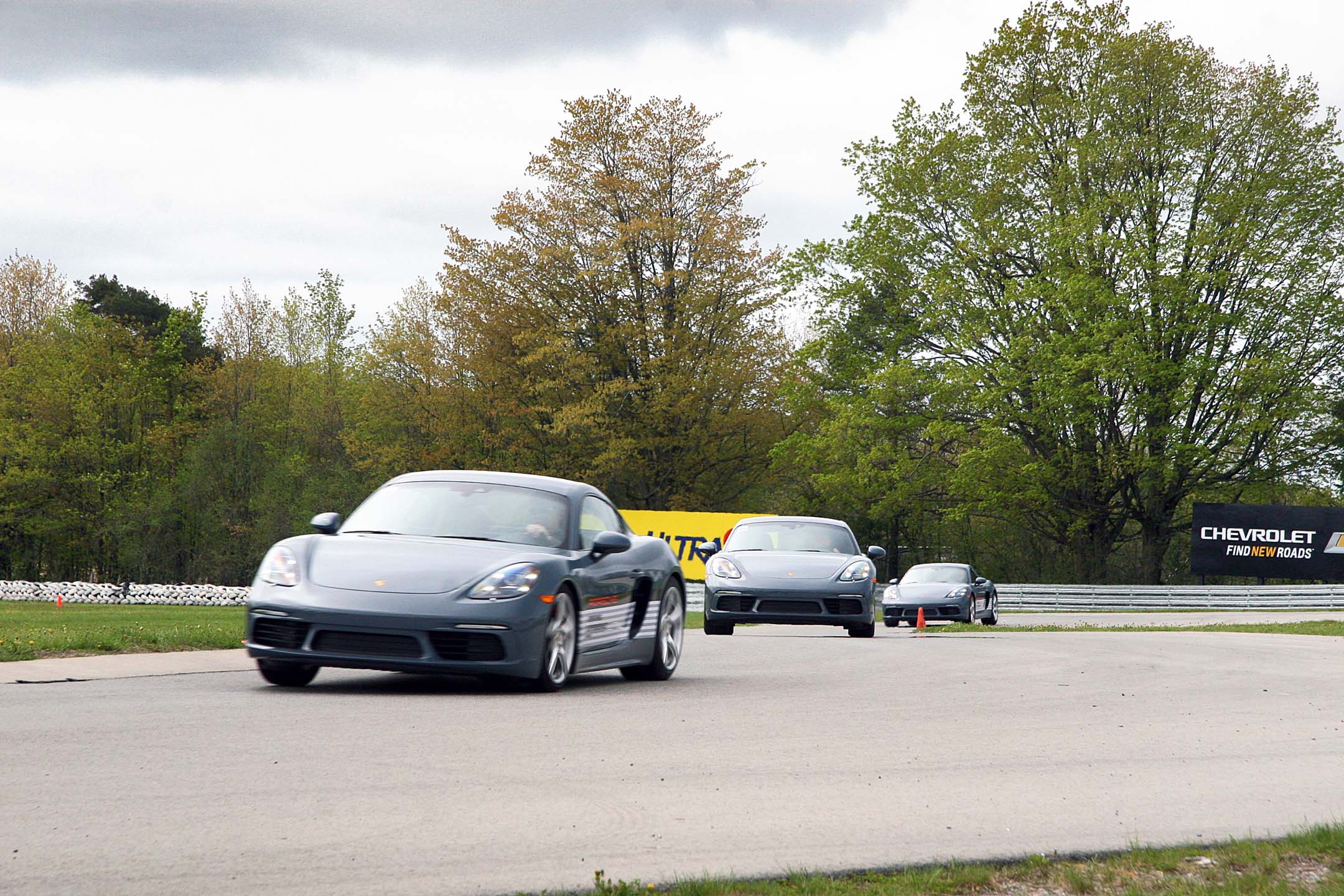 The students head out onto the track, single file, behind their instructor who will lead them around the track in a slow reconnaissance lap. If they follow his every move, braking where he brakes, moving to the outside of a corner when he does and placing their tires exactly where his have been at the apex of a turn – they’ll experience the most smooth and efficient way to drive the circuit.

But much like that old social experiment that begins with a phrase whispered in one ear, and continuing around the circle until it emerges from the last set of lips as something completely different – the original can lose much as it moves through translations.

Therefore, each student must drop to the back of the line immediately after completing one full lap behind the instructor, so that everyone experiences the proper line without adulteration. After a while the instructor picks up the pace and the cars go by in a blur of bright paint and flashing silver.

Even those drivers who aren’t compelled to pursue more advanced levels of training leave with a sense of fulfillment, having better confidence in their safety and driving skills and a new-found respect for the abilities of their Porsche.

Priceless? Not exactly, but neither does it come cheap. The two-day programme is $2,495 per person, for which Porsche Canada supplies the vehicles, instructors and lunch.