Potholes, Canadian Winters and Your Car, with Bill Gardiner

The invitation to this press event was slightly disconcerting with its bold subhead asking, “How much damage can potholes really do anyway?” The presentation was by Motoring TV veteran mechanic, Bill Gardiner, at a Kal Tire dealership.

Just one hour before, I had signed out a Porsche Cayenne for a week – but just signed, hadn’t really read the fine print. Was there a massive deductible and would I be using the Cayenne to test pothole destructiveness on some carefully designed course? Worse, the invitation had a mistake, listing the address 9 km away from the correct destination. So arriving at the appointment on time could’ve meant sprinting over some nasty potholes that only a greater Toronto winter can produce.

Fortunately, despite radical ranges in temperature, this winter’s snowfall has been negligible here (you’re welcome, Vancouver!). So road crews have been repairing potholes rather than removing snow over the past month. Consequently the last minute sprint up Kipling Avenue to the correct address was smooth.

More fortunately, the clinic was not a practicum, just a few props, including the local Kal Tire’s courtesy vehicle, a 2011 Dodge Journey, raised on a hoist with a front tire removed. There were 241,000 km on the odometer.

Potholes are bad. Not maintaining your car’s worse 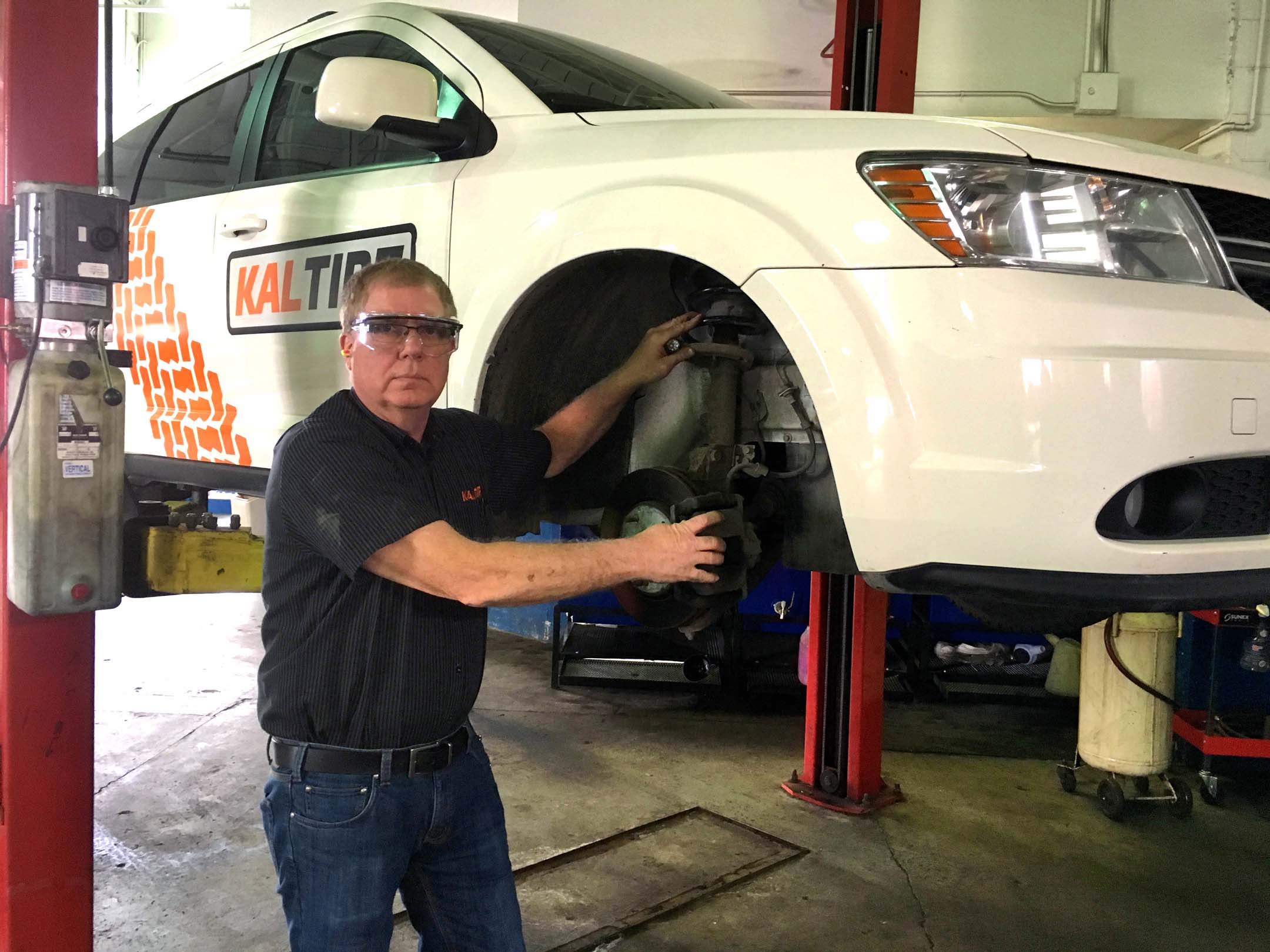 Bill Gardiner is a well of useful knowledge. What follows are his details.

“If you hit a pothole and all of a sudden pick up a shimmy or shake that you didn’t feel before, you’ve probably bent a rim.” It doesn’t have to be a shimmy, shake or rim damage. “If your tire develops a significant bulge, or your car is pulling to one side, or there’s a new noise after impact,” these too are symptoms indicating a problem with your steering or suspension.

What can you do about that, or better still, prevent it? “It’s prudent to inspect all steering and suspension components if there’s been a significant pothole impact.”

What if there hasn’t been a huge impact and you don’t notice any wobbles, noises or pulling? Gardiner recommends a wheel alignment once a year, regardless. “It’s timely to do when you’re replacing your tires. Roughly 50 percent of Canadians run two sets of tires: dedicated winter tires and all-seasons.”

That leaves two ideal opportunities per year to do a vehicle inspection. (Yes, fall and spring.) “While the wheels are off, it’s a good time to look at the suspension, and read the wear and tear on the tires.” Is there extreme or erratic tire wear? A worn section of the tire on one side is a sign of misalignment, the clue for a mechanic to search for damaged components.

That also leaves the other half of the country. What about those people who don’t have winter tires (you’re welcome, Vancouver)? “That other 50 percent of Canadians who only run one set of tires should check their steering and alignment at least once a year, when they have tires rotated.” So check your alignment when you touch your tires.

Wear and tear and winter can be the real problem

“A lot of times, potholes get the rap for breaking a component. But a lot of the time if the components were in good shape prior to the pothole impact, they would’ve survived it OK.”

Often, a vehicle that has seen a lot of seasons and/or clicks has components that have seen a lot of wear and tear but still work. “A significant pothole can finish them off. Those same components in good condition would survive the impact. But when they’re on the brink?” Kaput! If you’re on the highway, that could be quite dangerous.

You may not get much notice. “Modern vehicles are so good at isolating noise/vibration and harshness (NVH) from the passenger compartment. So sometimes you can have significantly worn components but you don’t hear or feel it within the cabin. Yet when we do an inspection, we find something that’s on the brink of failure. It needs to be replaced ASAP but the driver thought it rode fine.”

Gardiner shows an example. It’s a partially rusted strut that recently snapped and simply popped out of a vehicle while on the road. We look closer. Most of the coil spring is in good shape, the paint beneath dried and caked-on mud is revealed to be a vibrant black when Gardiner rubs the surface to expose it. Further down, closer to the road, where there’s more exposure to blasting dirt and salt, the coil is rusty. That’s where it had snapped. “Get enough grit and abrasion on the paint and it’ll start to sandblast it off. And eventually it’ll break.”

The piece was from a 2004 Intrepid with over 200,000 km. “So the pothole broke the piece but it was ready to go. When that happens in the wrong position, the [snapped] piece of spring will come out and cut the tire right in half.”

Maybe Gardiner thought I found that description dramatic, because next he showed a tire. It had a hole the size your mouth goes when you’re struggling to maintain control on just three tires at 100 km/h and surrounded by speeding idiots on their phones.

He shows another couple of props. These are rusty and significantly worn upper and lower ball joints. Normally they’re protected by a “boot”, a casing that traps lubricant inside. “The boot is supposed to keep the grease in and water and salt out.” These ball and joints are both rusty as a state full of Trump voters.

“It’s the same basic principle: a ball and socket joint, subject to the years of constant pounding and road splash. If you’re vehicle’s got more than 70,000 km, the ball joints should be inspected periodically. All these components need to be inspected before a wheel alignment, in case they need to be replaced.” Imagine you’re replacing your tires with an expensive new set. You don’t want the same degeneration happen to your new tires. It’s another reason an alignment inspection is so important.

Leave the inspection to a trained technician

Gardiner refers back to the example of the snapped strut. “The paint isn’t just there to make it pretty, it’s to inhibit corrosion.” It doesn’t matter how dirty the underbelly of your car gets, “as long as that paint isn’t compromised. Even this vehicle with 240,00 km, you scrub it a couple of times ... [he does] ... nice and clean.” So when a mechanic is servicing the car, “we have to be careful not to scratch such components.”

Even your mechanic isn’t perfect. Some damage is only visible to an alignment machine. It reads a combination of steering axis and inclination (SAI). SAI is built into the knuckle, a component of the suspension fitted just behind your tire. If you impact hard and damage a tire or rim, the knuckle could be bent just slightly but enough to cause problems. Yet “no mechanic can notice it by just looking at it. The knuckle’s an irregular shape to begin and won’t your eye pick up whether it’s bent. But it’s a critical angle to steering precision. The alignment machine will read if it’s off.”

A bent knuckle needs to be replaced and can’t be fixed with an alignment. How do you know if it’s damaged? Extremely poor handling and severe pull in the steering are indicators. But best use an alignment machine.

OK, so let’s summarize: 1) Watch for any differences, like pull or wobble after hitting a pothole. 2) Have your steering and alignment checked when rotating or replacing tires. Any other tips?

First line of defence against potholes is tire pressure

Check tire pressure regularly and fill your tires according to spec. Gardiner explains, “With low tire pressure it’s almost a given that if you hit something like a pothole or curb, you get some damage.” On impact, the underinflated tire gets trapped between the rim and the pothole. “The rim hits the tire like a guillotine and slices it.” Guillotine? Let them eat caked-on mud!

But if the tire pressure is too high? The tire doesn’t absorb the impact in the sidewall. The shock is felt throughout the vehicle and you probably think the pothole you hit was worse than it is. “Instead of being pliant, the tire’s like a rock.” No, the tires don’t burst, but “if the tire’s overinflated, too much of a shock from any impact, be it pothole, pavement, curb, whatever is transmitted into the steering and suspension.” There’s increased wear and tear on the other parts.

OK, not too hard, not too soft. Get the Goldilocks indications for the just right tire pressure, usually from your car’s driver door post. Some cars, like Volvo, put the tire pressure chart in the filler lid. So every time you fill up you see it, you’re reminded to check your tires’ air pressure. That’s the idea anyway.

“People make mistakes between psi (pounds per square inch) and kilopascals.” 35 psi equals 240 kPa and “they get that number confused or wrong maybe, in the dark, put way too much air in the tire.” 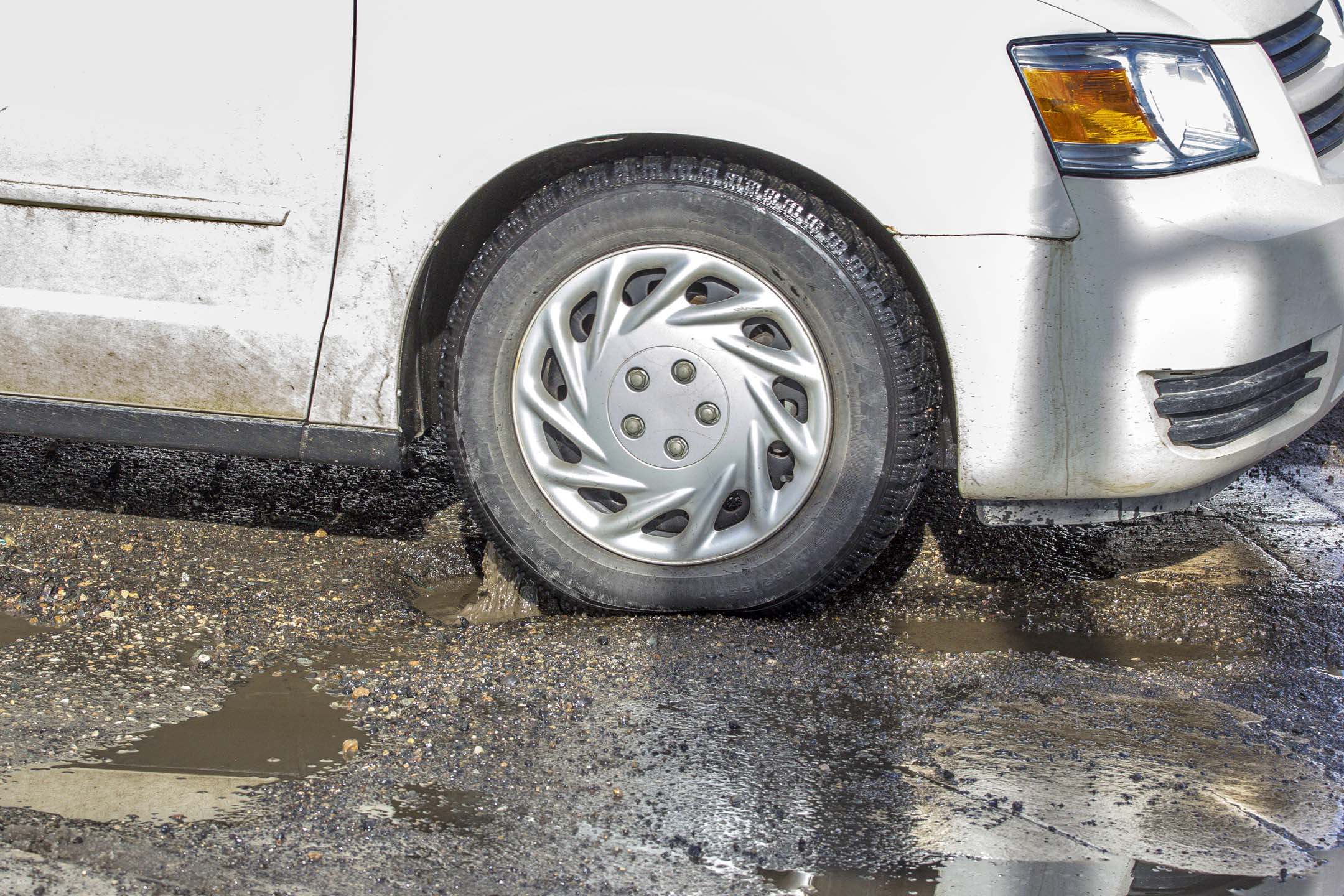 For every 5 degrees in dropping temperature, you lose 1 psi. “Tire companies tell us that normal air migration through a tire, or air loss that’s considered normal, is 1 psi per month. So if you haven’t checked your tires in four or five months, you could be down four or five psi just from that ‘normal’ air loss.”

One last piece of eminently sensible advice: “It’s a good idea for Canadian motorists to have a reliable tire pressure gauge in their car. And make the effort to learn to check pressure.” Mind you, Gardiner admits, “Nobody checks anything these days.”

In winter, fewer hours of daylight and nippy temperatures, people understandably may be less likely to do maintenance basics. But wise ones will, and be safer for it.